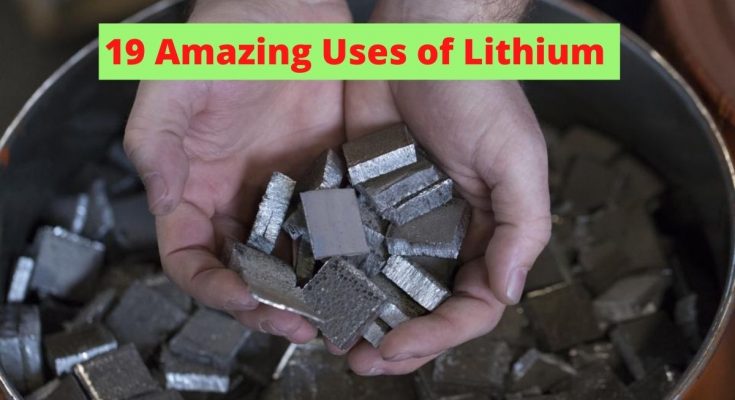 Do you ever wonder can something be so reactive that it may not be able to sustain normal room temperature and catch fire?

Or did you know that kerosene oil which is used to ignite fire can be used to prevent flaming of any material?

Or do you ever think about what keeps the batteries of your laptop and cell phones charged for so long?

Are you still wondering what are we talking about?

You are right, it’s Lithium!!!

Hello folks! If you are looking to know all about the uses and properties of lithium you have ended on the right page.

Lithium is the third element of the periodic table. It was discovered by Brazilian chemist Johan August Arfwedson, in 1817, from a mineral known as Petalite (Chemical formula LiAlSi4O10).

The atomic number of lithium is 3 and it is denoted by the symbol Li. It is an alkali metal and has a single electron in its valence shell. It forms a cation by giving away its valence electron to become stable. Australia, Chile, China, and Argentina are the largest producer of lithium in the world.

Do you want to know more about this magnificent metal?

Stay with us to know more….

In this article, we will study the uses of Lithium. Stay connected.

Let us begin with the basic properties of this alkali metal, so you can understand its uses better. A few important properties of lithium are given in the table below:

Now, that we have covered the important properties let us tell you about the wide variety of uses lithium has, and what makes it so useful.

Lithium is used in a wide range of products. We have tried to cover most of them in the points mentioned below:

The most important industrial use of lithium is metallurgy.

During the metallurgy process, active lithium is used as a scavenger element for the removal of impurities. It is especially used in the refining of metals such as copper, iron, zinc, etc.

It helps remove a number of non-metallic impurities such as oxygen, nitrogen, hydrogen, carbon, etc. In the Hall-Héroult process used for the extraction of aluminum, lithium is used to improve the melting behavior of aluminum oxide.

Lithium when alloyed with other elements, such as Magnesium and Aluminium increases their strength vastly and also, makes the material lighter in weight.

These greases are able to withstand high temperatures and are therefore used in aircraft engines, especially during World War II.

These greases are prepared using lithium-based soaps, known as lithium stearate, as they have the ability to thicken the oils.

These are made by heating lithium hydroxide, which is a strong base, with a fat, and have a higher melting point in comparison with other alkali soaps.

Lithium is widely used in the production of anodes in many non-rechargeable batteries. 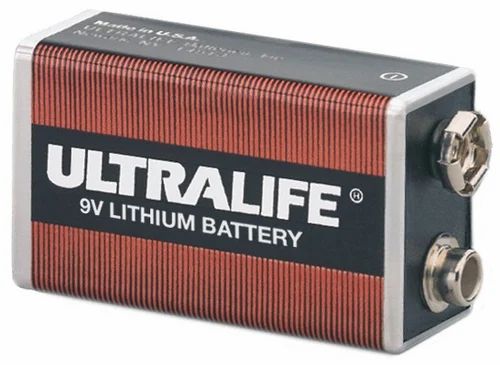 Another type of battery viz. lithium storage batteries is also made using lithium.

These are high-power rechargeable batteries and are widely used in electric cars, mobile devices, etc. The separation of electrodes is achieved by using solvent-free conducting polymers such as LiCoO2.

The reaction and the process for the same are described in the below diagram:

• Lithium is a highly reactive and flammable metal due to which it is used in pyrotechnics. It serves as an oxidizer in red fireworks.

Lithium is also used in organic synthesis at both laboratory and industrial scales. n-butyllithium, C4H9Li is the key reagent produced on large scale, commercially.

It is especially used as an initiator in polymerization processes such as the production of rubber. It also finds its use in manufacturing other organic products such as pharmaceuticals.

The coefficient of thermal expansion for lithium is almost double in value than that of aluminum and four times that of iron due to which it is also used in ceramics and glass industries.

Lithium oxide considerably reduces the melting point and viscosity of silica and is used as a flux in silica processing. It also improves the physical properties of the glazes such as heat resistance.

This is why oven wares and lab wares are usually made of glazes containing lithium oxide as they have a lower coefficient of thermal expansion.

Being hygroscopic in nature lithium chloride and lithium bromide are used as sorbents for gas streams. Also, lithium hydroxide and peroxide are used in closed spaces such as submarines, spaceships, etc. for purification of air and removal of carbon dioxide.

Lithium hydroxide forms lithium carbonate with the carbon dioxide present in the air as per the following reaction:

The crystals are grown artificially for this purpose as they have the lowest refractive indices and farthest transmission in the UV range.

Thermonuclear weapons also utilize lithium hydrides containing Lithium-6 as fuel for fusion reaction as it provides a source of tritium and also acts as a neutron absorber.

Due to this property lithium was in huge demand during the cold war. The lithium-6 and lithium-7 isotopes were used for the production of tritium and also, in making solid fusion fuels used in hydrogen bombs as lithium deuteride.

Lithium has the highest specific heat capacity of all the solids, around 3.58 kilogram-kelvin due to which it has high heat absorption capacity and is used as a coolant in heat transfer applications, especially in nuclear processes.

Complex hydrides of lithium such as Li[AlH4] are used as solid fuels as well as high energy additives for rocket propellants.

It is known to increase mitochondrial function and also, to reverse telomerase shortening in patients with such mental illnesses. Lithium is also used in the diagnosis of illnesses such as schizoaffective disorder and cyclic major depression. It is also proposed as a treatment for cluster headaches.

John Cade, an Australian psychiatrist is known to popularize the use of lithium for the treatment of maniacs. The mood-stabilizing properties of lithium were quite famous in Europe and the United States during mid 20th century.

Other Common Uses of Lithium

Lithium is used so commonly around you in so many things. But, we often forget to recognize or appreciate this metal. So, if you have also missed identifying this incredible metal, let us tell you where to find it:

Lithium is used in air purifiers for removing impurities such as carbon dioxide from the air by forming lithium carbonates.

It is used in the manufacturing of lithium storage batteries inserted in laptops, cell phones, cameras, and other such devices that are rechargeable and require long-term use.

It is used in spectacles especially made for infrared, ultraviolet, and vacuum ultraviolet ranges.

The special glassware used for warming food in the microwave is also made using lithium, which improves their thermal properties.

Is LiOH a Strong Base

Hence, lithium has a wide range of uses and can be used for a variety of purposes such as metallurgy, aircraft, air purification systems, nuclear weapons, pyrotechnics, treatment of mental disorders, manufacturing of glassware, optics, etc.

Hope we answered all your queries related to the uses of lithium, please let us know if you want to know more and keep visiting to read other such interesting articles.