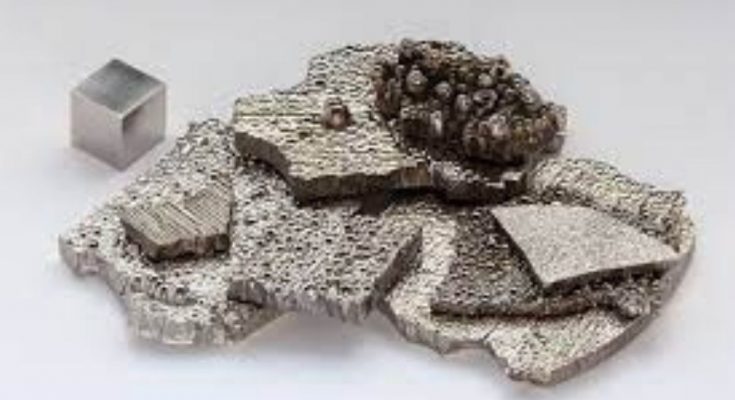 Can you name a metal that was named after mythical Goblins?

This metal has been used as the blue dye since ancient times and is also used in the treatment of cancer.

It forms part of essential nutrients in your body and can also be used to improve food safety.

Enough of the riddles, I hope you already know the answer. Yes, we are talking about “Cobalt”.

Cobalt was officially discovered by Georg Brandt, a Swedish chemist in 1739. It does not occur in nature in a free state but, in combination with other elements.

As there was no clear reason known for this, Germans blamed this on the ancient evil spirits or mythical goblins known as ‘kobolds’. This is where the name “Cobalt” was derived from.

Cobalt is also found in soil and crusts on the seafloor. Ancient Chinese, European, and Egyptian civilizations are known to use cobalt for making blue dyes for jewelry and paints. However, for a long time, credit was given to bismuth.

In the mid-20th century, cobalt was also used as a beer additive by some breweries as this helped maintain the foamy head. However, this use was later banned due to the high heart failure risk.

Cobalt is extracted from minerals such as cobaltite, skutterudite, linnaeite, heterogenite, smaltite, and erythrite. However, still cobalt is majorly extracted as a by-product of the mining of iron, copper, nickel, zinc, silver, manganese, etc.

These ores have to undergo complex processing to concentrate and extract cobalt. China is known to be the largest producer of cobalt.

The process of reductive smelting produces free cobalt. It is hard, lustrous, and silver-gray in appearance.

So, aren’t you amazed by the characteristics of this wonderful metal? Are you excited to know more about it?

We are equally excited to tell you more. So keep reading.

Cobalt is a transition metal. It is denoted by the chemical symbol Co and has the atomic number 27. It is a d-block element belonging to Group 9 and Period 4. 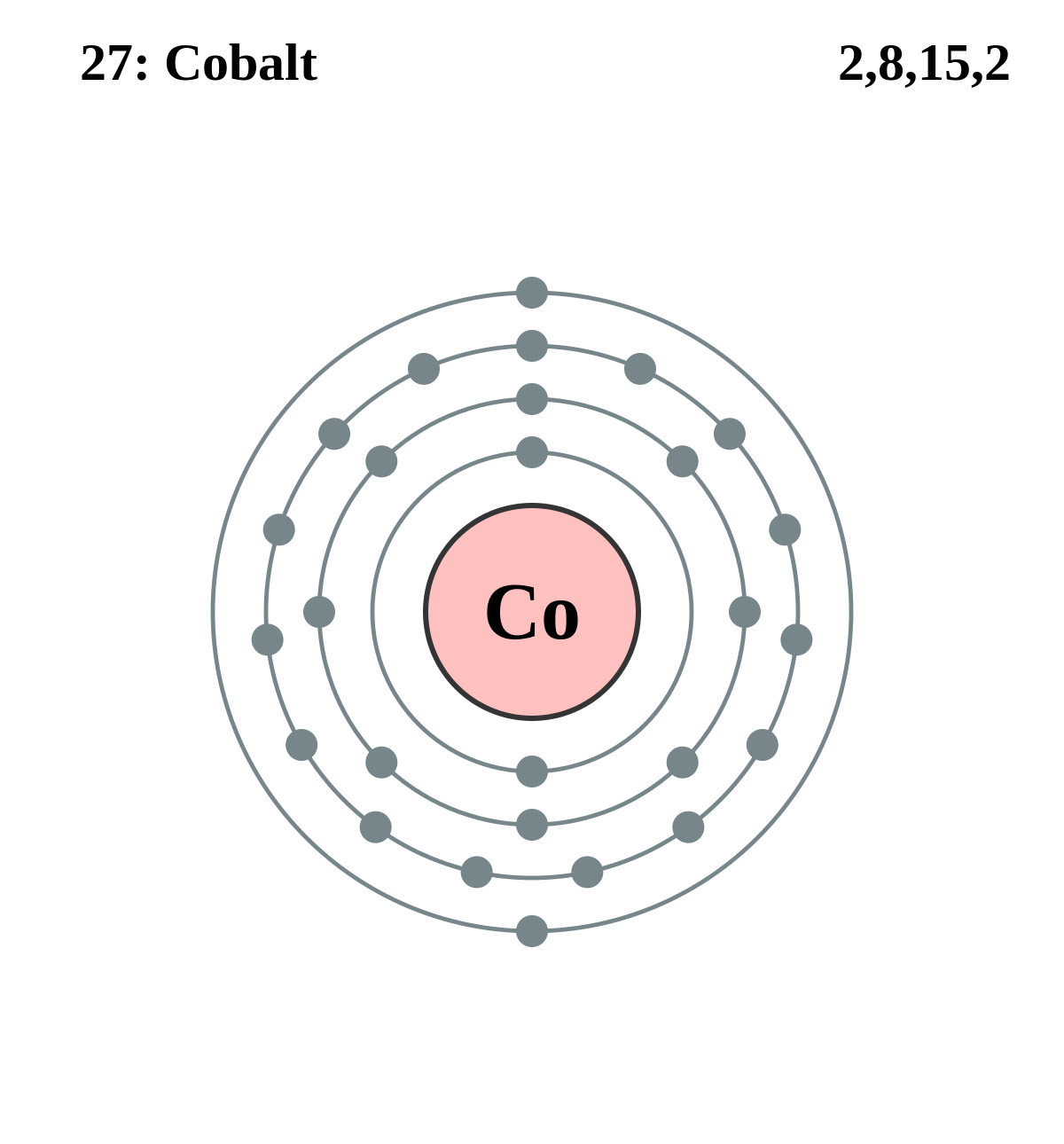 Polished cobalt is silvery-white in appearance and gives a slight bluish tinge. There are two allotropes of cobalt known so far. They are hexagonal close pack structure which is stable below 417 °C or 783 °F, and face-centered cubic which is stable at even higher temperatures.

Cobalt, alongside nickel and iron, is the third element that is ferromagnetic at room temperature. It is known to be ferromagnetic up to a temperature as high as 1,121 °C or 2,050 °F. This is the highest Curie point known for any metal or alloy.

It does not directly combine with nitrogen or hydrogen, but slowly dissolves in mineral acids. At high temperatures, it is attacked by oxygen and water vapors to form Cobaltous oxide.

Although large pieces of cobalt are relatively inert in air, extensive oxidation takes place at temperatures above 300 °C.

A few important properties of cobalt are listed in the table given below:


Having noted all the important properties of Cobalt, we can now move forward to study its different uses.

Cobalt has several uses in different industries. Also, it plays a significant role in the biological functioning of human beings. A few uses of cobalt are listed below:

Cobalt is used to produce high-performance alloys that exhibit favorable mechanical properties. Cobalt is used in making superalloys that are resistant to corrosion, wear, as well as temperature.

The basic composition of most cobalt alloys is cobalt and chromium where chromium acts as the strengthening agent. Nickel is added to cobalt alloys to make them more heat resistant so they can tolerate a wider range of temperatures.

Being strong as well as temperature and heat resistant, cobalt alloys are used in challenging applications. For example, turbine blades for gas turbines and aircraft jet engines are made using cobalt alloys.

Permanent magnets are also made using alnico which is an alloy of cobalt, nickel, iron, and aluminum. 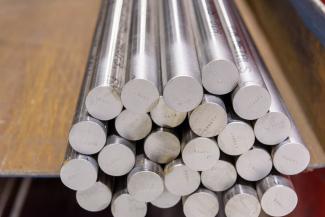 Cobalt alloys are also suitable for making artificial implants as they do not wear easily. Prosthetic parts such as hip and knee replacements are made using Vitallium which is a cobalt-chromium-molybdenum alloy. It is also the dominant alloy used in total joint arthroplasty.

These alloys are biocompatible. This reduces the possibility of allergic reaction and immune response in the patient.

Cobalt-chrome alloys are specially used for making dental prosthetics thus replacing nickel that may cause allergic reactions in some patients. 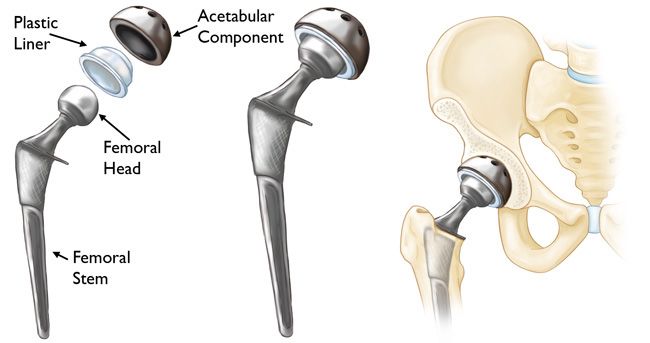 Cobalt is less dense in comparison to platinum but is four times harder. The jewelry made using cobalt is scratch, chip, and corrosion-resistant.

Strong and dynamic designs can be created in the jewelry carved out of cobalt owing to its lower density and natural malleability.

The cathodes of lithium-ion batteries are made using lithium-cobalt oxide (LiCoO2). In these cathodes, the layers of cobalt oxides are intercalated with lithium.

To improve the oxidation of nickel in the battery nickel-cadmium batteries and nickel-metal hydride batteries also use cobalt.

Recently cobalt has also found its use in rechargeable batteries used in electric cars. The mean reason for using cobalt in these batteries is the ability of this metal to increase their life as well as energy density.

A number of cobalt compounds have been used as oxidation catalysts. Cobalt acetate is used in the reaction that converts xylene to terephthalic acid. Cobalt carboxylates, also known as cobalt soaps, are typical cobalt catalysts.

Carboxylates are also used as drying agents in paints, varnishes, and inks where they work by oxidizing drying oils. They are used in steel-belted radial tires to improve adhesion between steel and rubber. Polyester raisin also utilizes these catalysts as accelerators.

The Fischer–Tropsch process also uses cobalt catalysts for the hydrogenation of carbon monoxide into liquid fuels. Cobalt octacarbonyl is used as a catalyst in the Hydroformylation of alkenes.

Cobalt and molybdenum-based catalysts are used in the hydrodesulfurization of petroleum.

Since the Middle Ages cobalt has been used in making a blue-colored jar known as smalt. It is prepared from the mixture of mineral smaltite, quartz, and potassium carbonate that produce a dark blue colored silicate glass upon melting.

Due to their superior chromatic stability, these cobalt pigments are used as artists’ pigments.

Cobalt-60 is used in producing gamma rays by bombarding it with neutrons. It produces predictable gamma rays with energies of 1.17 and 1.33 MeV. The half-life of this isotope is 5.27 years.

Cobalt-57 is used as a radiolabel for the uptake of vitamin B12. It is also used in other medical tests such as the Schilling test as well as in Mössbauer spectroscopy.

Cobalt is the chief component of vitamin B12, also known as cobalamine. It plays an important role in the metabolism of most animals. In the stomachs of ruminant animals, bacteria convert cobalt into Vitamin B12.

Cobalt is also a fundamental co-enzyme of cell mitosis. It also plays a vital role in forming amino acids and proteins that are responsible for creating myelin sheath on nerve cells.

It helps in creating neurotransmitters required for the correct functioning of an organism.

Moreover, the synthesis of erythropoietin is also stimulated by cobalt salts. These are ultimately related to the formation of erythrocytes in the bone marrow.

A layer of cobalt is also added on top of the materials through electroplating to make them appear more attractive. This also makes the material hard and resistant to oxidation thus preventing rusting. For porcelain enamel, cobalt is used as a base primer. It is used for producing different shades of blue and is used for painting porcelain, pottery, tiles, and glass.

Therefore, cobalt is used for a variety of purposes including medicinal, ornamental, biological, etc. It is used in the preparation of batteries, catalysts, pigments, and colors. Also, cobalt plays an important role in the functioning of various animals and plants.