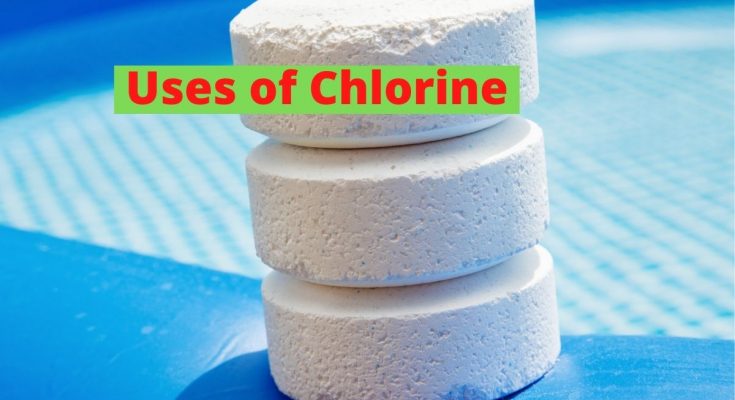 Have you ever drank tap water or taken medication? Have you ever disinfected hard surfaces to kill germs like Covid-19? If yes, you probably have been exposed to chlorine.

Chlorine, symbolically written as Cl, is extensively found in ocean water and Earth crust as a part of compounds like sodium chloride, carnallite, etc. It is used to manufacture a wide variety of products, such as plastics, papers, rubber, antiseptics, paints, petroleum products, and medications.

It is highly toxic in its gaseous form and has been used as a warfare chemical during World War I.

The list of chlorine uses is very long. Keep reading the article to learn how chlorine is used in different industries, healthcare centers, and even homes.

Bleaching is a process in which a material is decolorized by converting its colored compounds into colorless compounds. Chlorine has long been used as a bleaching agent to whiten paper, cotton, straw, and soap. 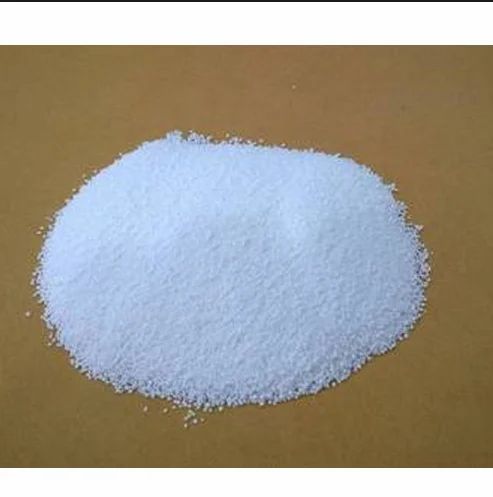 Chlorine performs this action in the presence of water. It reacts with water to form hydrochloric acid and hypochlorous acid.

Hypochlorous acid is an unstable molecule because of the +1 oxidation state of its chlorine atom. So it dissociates into hydrochloric acid and nascent oxygen [O].

Nascent oxygen is also very unstable and reactive. It immediately oxidizes the colored compound and converts it into a colorless compound.

Paper pulp is brown in its natural state. Chlorine removes the lignin element (which turns yellow when exposed to sunlight) from it and whitens the paper completely.

This is how paper, cotton, and soap are bleached on the commercial scale.

Chlorine is used in the pharmaceutical industry to produce a wide variety of drugs. Nearly 85% of all pharmaceutical drugs make use of chlorine or chlorine-related compounds during their synthesis.

Drugs like cisplatin, zinc chloride, chromic chloride, and ferric chloride are all examples of chlorine-containing compounds.

Chlorine gas is a pulmonary irritant, having the ability to damage lung tissues and make it hard to breathe. It directly affects the respiratory system and even causes death when given in high doses.

Some scientists believe that chlorine shows this effect due to its oxidant properties and hypochlorite ion (that forms when hypochlorous acid dissociates).

Due to the toxic nature of chlorine gas, it was used as a warfare agent for the first time during World War I.

Chlorine gas has a pungent smell, like the odor of bleach. The strong smell warns people when they are exposed to it.

It was first used to treat drinking water in the 1900s in North America and Europe, which resulted in a great decline in cholera cases. Today, it is used by more than 98% of US water utilities to maintain the quality of drinking water.

Chlorine exists as hypochlorous acid and hypochlorite acid in water. These acids react with biomolecules, including membrane lipids and enzymes, of the bacterial cell and destroy the organism.

They alter the cell wall’s composition, terminating its function fully. As a result, essential cellular constituents come out of the cell leading to microbial death. 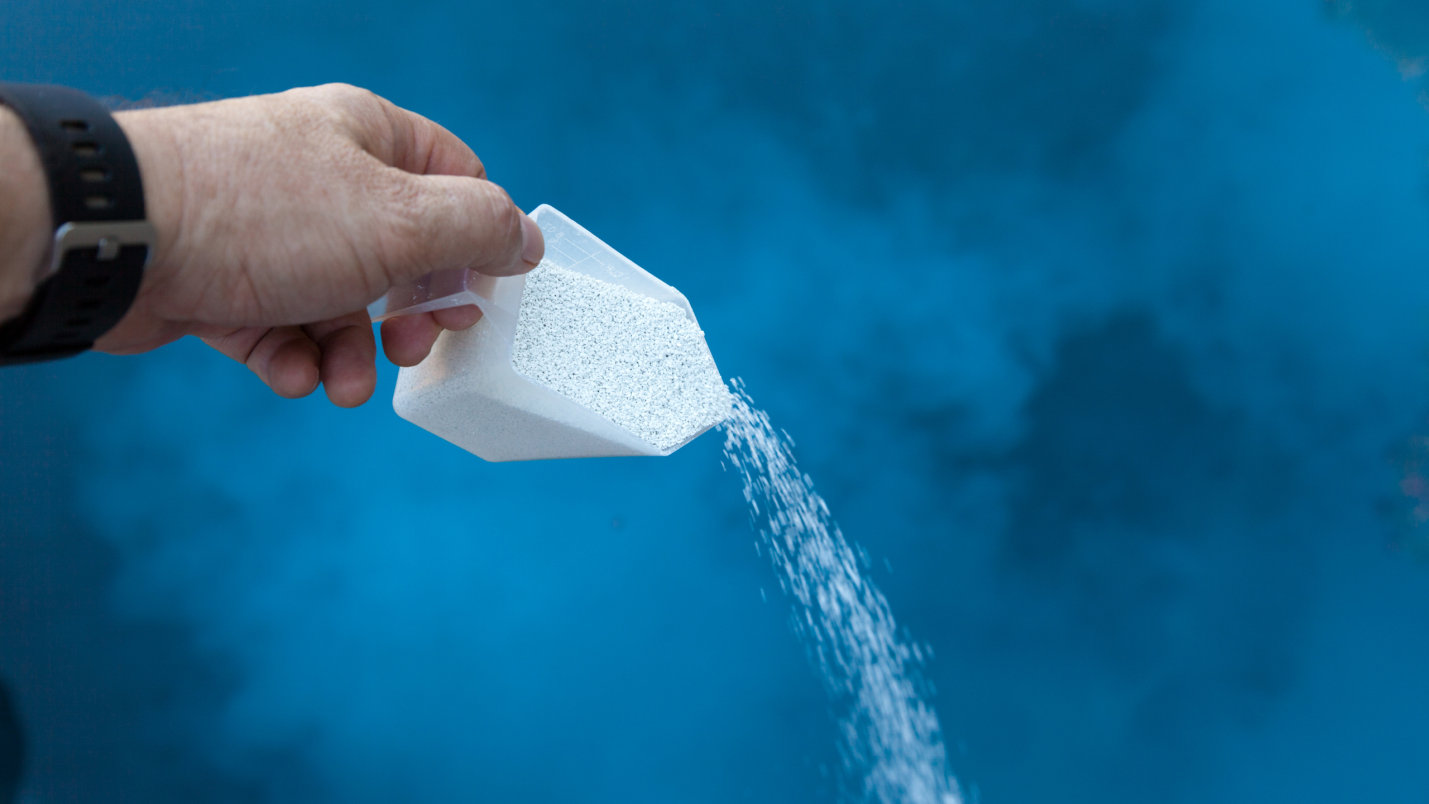 Biofouling is the gradual growth of bacteria, protozoa, and algae around a structure that is in contact with water, such as submarine hulls, ships, and cooling systems. It eventually leads to degradation of the affected structure.

Every year, millions of dollars are used to repair submerged structures that get damaged due to biofouling.

However, this huge amount can be saved by controlling biofouling through chlorination. Adding low doses of chlorine to water electrolytically is very effective in controlling the biofouling of a large cooling system.

Chlorine, as a disinfectant, destroys microbial cells and cleanses the affected surface in a short time span.

Chlorine is widely used to produce plastic. 30% of the industrially produced chlorine is used to make polyvinyl chloride (PVC), which is the third most widely manufactured plastic polymer.

During the PVC production process, chlorine is manufactured by the electrolysis of saltwater. Then it combines with ethylene and produces ethylene dichloride, which is heated at a high temperature and transformed into vinyl chloride monomer. The monomers are polymerized to form resins of PVC.

The presence of chlorine in PVC makes this synthetic material compatible with many other materials. It also gives PVC flame retardant properties.

Extend the Shelf Life of Fruits and Vegetables

Chlorine is a potent antimicrobial agent. It is combined with inorganic elements like sodium or calcium to form hypochlorites, which are extensively used in the food industry to wash veggies and fruits, and sanitise food contact surfaces.

These substances destroy microbes such as viruses and bacteria that cling to the surface of veggies and fruits and prevent their regrowth, helping improve their life span.

They are eco-friendly and cost-effective, making it easier to sanitize food contact surfaces on commercial levels.

Chlorine is also used to produce a wide variety of chemical compounds such as:

• Potassium chloride (used as a medication)

• Chlorobenzene (a solvent used to make many other chemicals)

Chlorine is also used in different metallurgical processes to extract elements from their ores.

Chlorinating agents like hypochlorous acid and chlorine gas are all easily available at low costs. That is why they are extensively used to recover metals from wastes and prepare pure metal chlorides.

Chlorine has been used as an antiseptic agent in hospitals for more than 100 years.

It is available in both solid (calcium hypochlorite), and liquid (sodium hypochlorite) forms that you can use for different purposes, such as sterilizing surgical instruments, creating sterile packaging for instruments, preparing lab reagents, and disinfecting lab coats.

Chlorine products are inexpensive and do not leave toxic residues, making them a great choice for hospital use. 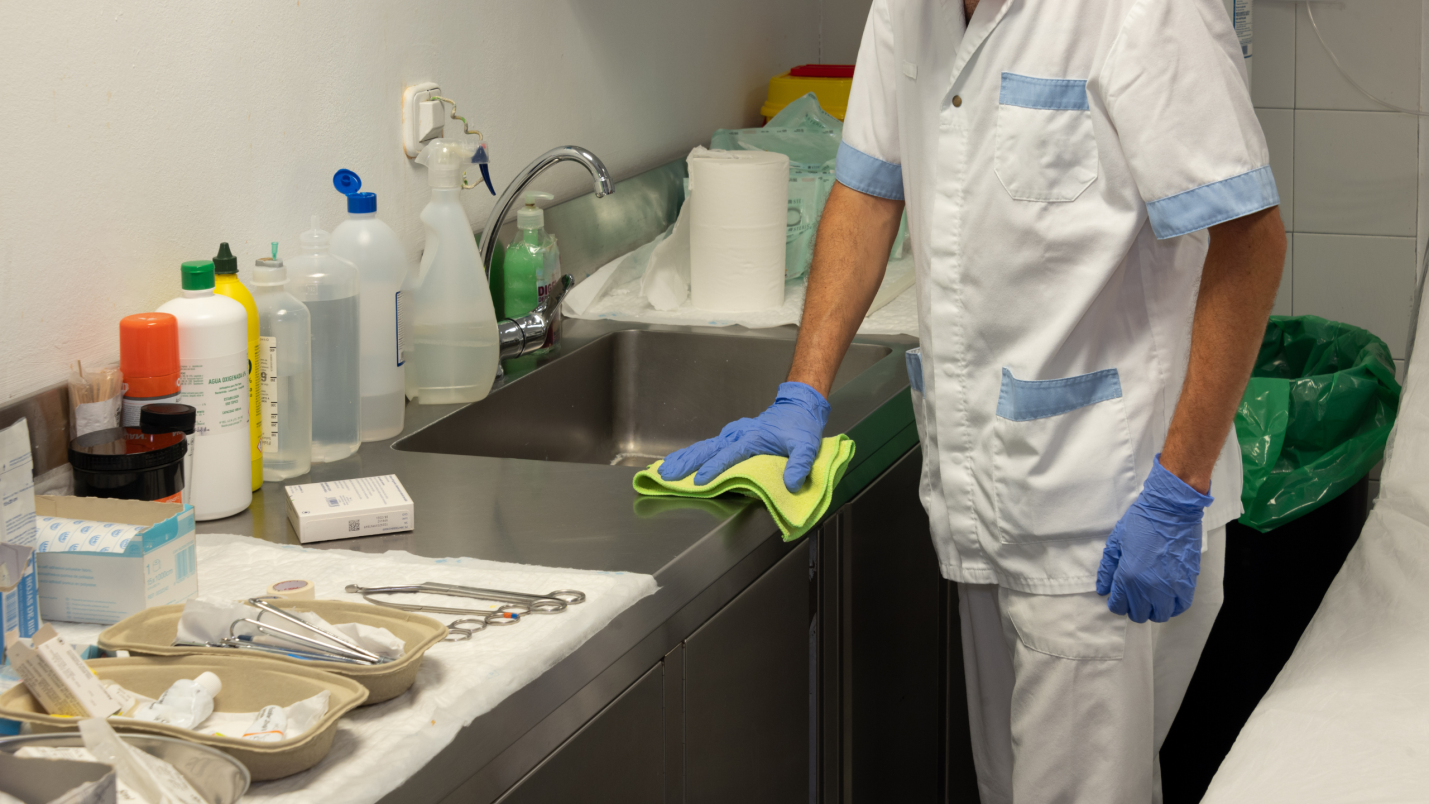 Several parts of automobiles are prepared using chlorine, making it an important element for the automotive industry.

Chlorine is used to prepare nylon, which is further used to manufacture car airbags, safety belts, anti-freezers, dashboards, and bumpers.

You can also find it in products that you use in daily life, including water hoses, carpets, and lawn furniture. This way, chlorine helps us make our homes beautiful and safer.

They offer safety to security personnel and soldiers. Medical equipment used in health care centers to protect soldiers’ lives is also made with chlorine.

Chlorine was discovered in 1774 by a Swedish-German chemist, Carl Wilhelm Scheele, who initially thought it had oxygen.

Later in 1810, Humphry Davy found that it was actually an element, and then he gave this element the name ‘chlorine.’

Chlorine has 25 isotopes, and only 2 of these isotopes (37Cl and 35Cl) are stable. Its electronic configuration is [Ne]3s23p5. Enlisted below are a few chemical and physical properties of chlorine.

• Its atomic number is 17, meaning it contains 17 electrons and 17 protons.

• Chlorine reacts with almost all elements of the periodic table, except the lighter noble gases.

• It is corrosive in nature and attacks specific types of plastic, rubber, and metals (in the presence of humidity).

• It is soluble in water and reacts with it to form certain acids.

• Chlorine gas is greenish-yellow in color.

• It is 2.5 times heavier than air, due to which it initially stays close to the ground and then diffuses into the air.

• It has a sharp pungent smell and causes suffocation when inhaled in high doses.

• It is not an explosive element, but it does support combustion.

Related topics you must readout

Chlorine, the 17th element in the periodic table, has several applications in different industries. It is a popular disinfectant that people use to treat water, sterilize hard surfaces, and clean vegetables or fruits. It is extensively used to whiten paper and prepare medications.

Chlorine, being a highly reactive halogen, reacts with several elements and is rarely found in nature as elemental chlorine.

It is abundantly available in nature in the form of sodium chloride, making it an inexpensive and easily available element. Most of its products like disinfectants, bleaches, etc. are also available at low costs.