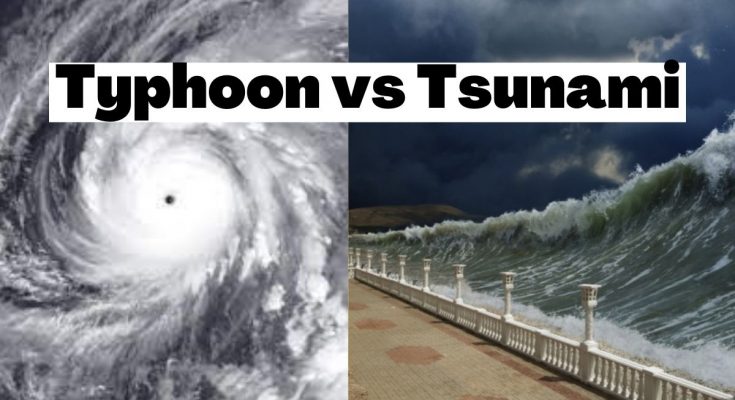 History has taught us that man will always be inferior to Nature no matter how far he goes and how much he achieves in life.

While the advancement of science and technology has helped us predict natural disasters in time to save our lives, these calamities are still unstoppable and cause destruction on a massive scale.

Typhoons and tsunamis are both included in the list of natural calamities. Since both these disasters occur in water, it is not uncommon for people to get confused between them.

So, what is the difference between a tsunami and a typhoon? The major differences between Tsunami and Typhoon are the causes of their occurrence and their propensity for destruction. A tsunami occurs due to an earthquake or a volcanic eruption underwater. On the other hand, a typhoon results from a weather phenomenon, precisely equivalent to a hurricane. Amongst the two, Tsunami lasts for a shorter period of time, but is more massive and destructive.

In this article, we have focused on understanding the differences between a tsunami and a typhoon based on their formation, speed, strength, and more.

Tsunami vs. Typhoon: at a glance

We will delve into the basic differences between Tsunami and Typhoon in the table given below:

Now, let’s move on to explore the differences between these natural disasters.

A tsunami, sometimes known as a “harbor wave,” is a sequence of waves created by the displacement of a significant volume of water in a water body, usually an ocean or a big lake.

Tsunamis can be caused by volcanic eruptions, earthquakes, and other underwater events (including detonations, landslides, glacier calving, meteorite impacts, and other disturbances). 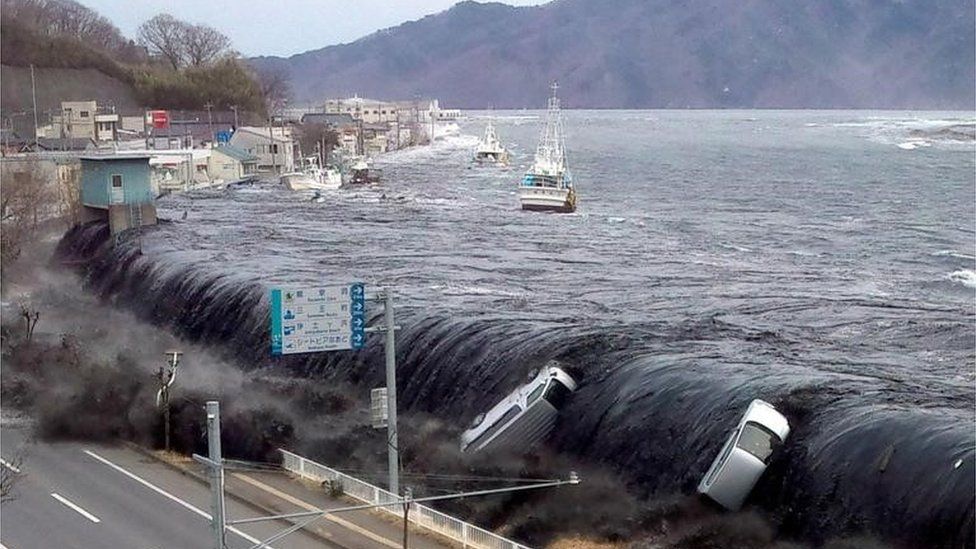 Based on the distance from their place of origin, Tsunami can be categorized into three different categories.

In this section, we will take a deeper look into these categories.

Also referred to as a “Near-field Tsunami,” the Local Tsunami is the one that originates within a range of 100 kilometers from the point of impact.

In terms of time, it takes a local tsunami less than an hour to reach the impacted coastline.

Since the Local Tsunami takes place within a very short period, there is barely time to warn the civilians and evacuate the areas.

It results in large-scale destruction and a high causality rate.

Regional Tsunami has a lesser intensity than the Local Tsunami and originates within the range of 1000 kilometers from their source.

This Tsunami takes between 1-3 hours to reach the affected coastline.

Compared to the time limitation of a local tsunami, people have more time to prepare for the regional Tsunami.

However, it is still not enough to evacuate their area completely, resulting in fewer casualties than the first one.

Also known as “Tele-tsunami” or “Ocean-wide Tsunami,” a Distant Tsunami takes more than 3 hours to reach the impacted coastline.

This Tsunami originates from a source that is farther than 1000 kilometers away from the source of origin.

Although this Tsunami doesn’t take place frequently, its effect can be quite hazardous. The initial judgment of this type of Tsunami could be of local Tsunami, as it travels in swathes of ocean basins.

Distant Tsunami covers a larger portion of the land, which makes it catastrophic.

However, the time between the cause and effect is more than 3 hours, which provides people with enough time to evacuate the area.

How are Tsunami formed?

The formation of the Tsunami starts far offshore. Most commonly, Tsunami takes place because of an earthquake, volcanic eruption, or landslide occurring within a large water body.

The water gets displaced on the seabed because of a sudden change in movement. Even though the vertical movement might be less than one meter, the resulting volume of water displaced can be massive.

The waves spread rapidly in the deep water and travel at a speed of more than 800km/h with a height of 30 centimeters that becomes difficult to judge.

The wind-driven waves can be up to 200 kilometers between successive tsunami wave crests.

The waves consist of a peak and a trough, and at times the trough can reach the land before the peak. The tide will go hundreds of meters further than usual by causing a drawback.

This drawback can last for 6 minutes before the peak reaches the shore.

A typhoon is an extremely powerful, spiral-shaped storm that forms in low air pressure areas in the western half of the North Pacific Ocean between 180° and 100° east.

Typhoons are not entirely different from hurricanes; all these calamities are more or less the same, only have different points of origin.

These storms can have low- to high-speed winds that are accompanied by rain. On the Saffir-Simpson scale, their severity runs from 1 to 5, with one being the least severe and five being the most. 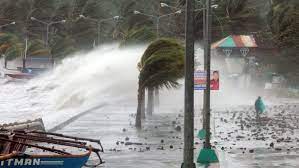 How is Typhoon formed?

A cyclone is formed when warm moist air rises upwards on the ocean. Low air pressure is created as the air rises up and away from the ocean.

It causes air from the higher-pressure areas to travel towards the low-pressure area, warming the air and causing it to rise above. The water in the air condenses as the warm, moist air rises and cools, forming clouds.

The heat and water escape from the ocean surface, along with the entire system of clouds and wind swirling and increasing.

As the wind system rotates rapidly, an eye is formed in the center. A cyclone’s core is calm and clear, with low air pressure. The air rises and becomes buoyant due to the temperature difference between the warm, rising, and cooling environments.

Around 70 to 90 cyclonic systems form each year all across the world. The wind spirals around a low-pressure area due to the Coriolis Effect.

Because the presence of Coriolis force in the equatorial strip between 5 degrees north and 5 degrees south latitudes is insignificant, cyclonic systems do not form in this region. 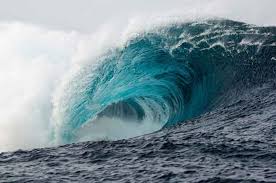 A tsunami is usually seen as a swiftly advancing or receding tide. A wall of water or a sequence of breaking waves may form in various conditions.

Tsunami waves are different from usual ocean waves caused by wind and storms. It is because most tsunamis do not “break” like the curling, wind-generated waves that surfers enjoy.

Wind-generated waves often have intervals of 5 to 15 seconds between crests. 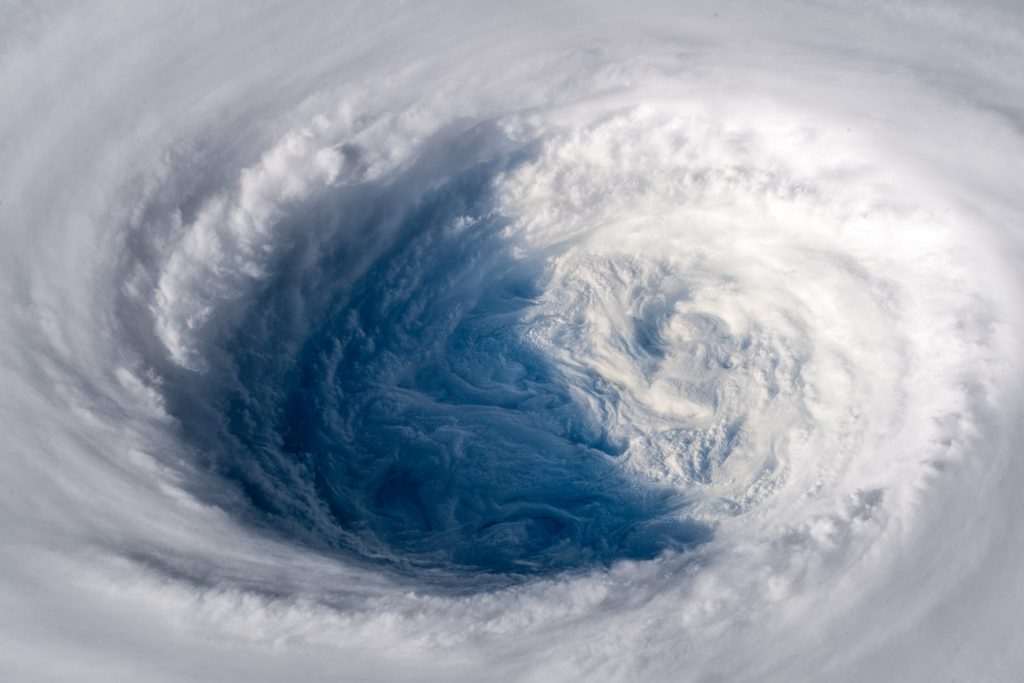 A mature typhoon can be separated into three zones based on cloud structure: the eye, the eyewall, and the spiral rain bands.

The “eye” of a typhoon is generally round and located in the storm’s center. Its size varies from less than 10 kilometers to more than 200 kilometers across, although most are between 30 and 60 kilometers in diameter.

Winds are light, and the weather is pleasant within the eye. The “eyewall,” a roughly circular ring of dense clouds, surrounds the eye.

The air inside the eye is dwindling. On the other hand, the eyewall contains very deep convection and is the Typhoon’s area of greatest surface winds and heavy rain.

Outside the eye, convection is arranged into long, thin rain bands nearly parallel to the surface wind direction.

These bands are sometimes referred to as “spiral rain bands” because they appear to spiral into the center of a tropical storm.

A typhoon is a powerful storm, but a tsunami is a massive wave. Because typhoons get created by warm, low-pressure ocean water and the Coriolis force, they can only form within 10 degrees north or south of the Earth’s equator (the force that comes from the rotation of the Earth).

On the other hand, a tsunami can occur anywhere with a huge water body, like an ocean or a large lake.

They can form due to natural causes, detonations, and human action, resulting in the displacement of a significant amount of water.

Both the calamities can cause severe destruction. However, a tsunami is more difficult to predict, which means that the residents in potentially affected locations should keep a watch out and flee to higher ground as fast as possible.

The sound of receding water followed by a suckling sound is a common sign of an impending tsunami.

As the swirling clouds of a typhoon can be seen from above, they can be predicted in the weather forecast.

The intensity of a typhoon can also be predicted, unlike a tsunami, which is normally judged after the damage has been done.

Every natural disaster that occurs around the world has the potential to be destructive and fatal, causing loss of life and property.

Typhoons and tsunamis wreak havoc everywhere they go. A typhoon is a severe and devastating storm that revolves around a low-pressure zone.

A tsunami is a powerful water wave that occurs due to a disturbance in the ocean or an earthquake.

The recovery from these natural disasters or tragedies takes a long period of time.