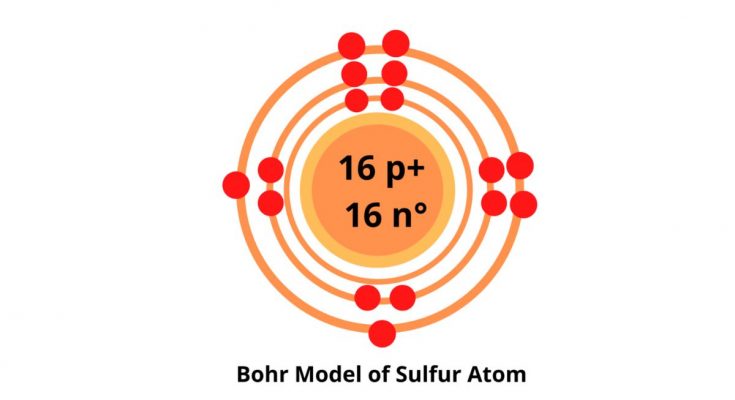 Sulfur has the atomic number 16 and is denoted by the chemical symbol S. Under normal conditions, sulfur occurs as a cyclic octatomic molecule represented by formula S8.

It is the fifth most abundant molecule on earth’s surface and occurs as a crystalline solid at room temperature with a bright yellow appearance.

Sulfur is known since ancient times and is used for a number of purposes such as manufacturing insecticides, fungicides, fertilizers, matches, etc. Majorly, it is used for the production of sulfuric acid, which in turn is used in the manufacturing of phosphate and sulfate fertilizers.

In this article, we will study more about sulfur and its Bohr model.

Ernest Rutherford gave the planetary model of the atom in 1911. Although this model was widely accepted, there were certain drawbacks that could be explained by him. The major one was that the model did not speak about the stability of the atom.

The model rightly explained the movement of electrons around the nucleus of the atom. However, it could not explain the fact how will the atom remain stable as the moving electrons will undergo acceleration and emit energy.

Later, in 1915 Niel Bohr modified this model. He explained that the electrons do not travel in a random path but follow definite orbits while moving around the nucleus. Each of these orbits was said to have fixed energy. This is why these orbits were also known as energy levels or shells.

He named these orbitals in ascending order from inside to outside. In the alphabetical order, these shells were named K, L, M, N, etc. while in the numerical order these were named 1, 2, 3,4, etc. with the lowest number assigned to the innermost shell.

This model came to be known as the Bohr˗Rutherford model or Bohr model of atom. As per this model, an atom consists of a positively charged nucleus comprising two atomic species, positively charged protons and neutral neutrons. The nucleus is stationary and the maximum mass of the atom is concentrated in it.

The electrons are also capable of shifting their orbits. They move from lower to higher energy levels when they absorb energy, while they fall from higher to lower energy levels as they lose energy.

The electrons located in the highest energy level of an atom are known as valence electrons while the shell is known as the valence shell. These electrons are responsible for the formation of chemical bonds between two or more atoms.

In the case of sulfur, there are 16 protons, 16 neutrons, and 16 electrons. The electrons are distributed in three shells, viz. K, L, and M shell.

Drawing the Bohr Model of Sulfur

Sulfur is the 16th element of the Periodic table. It belongs to Period 3 and group 16. 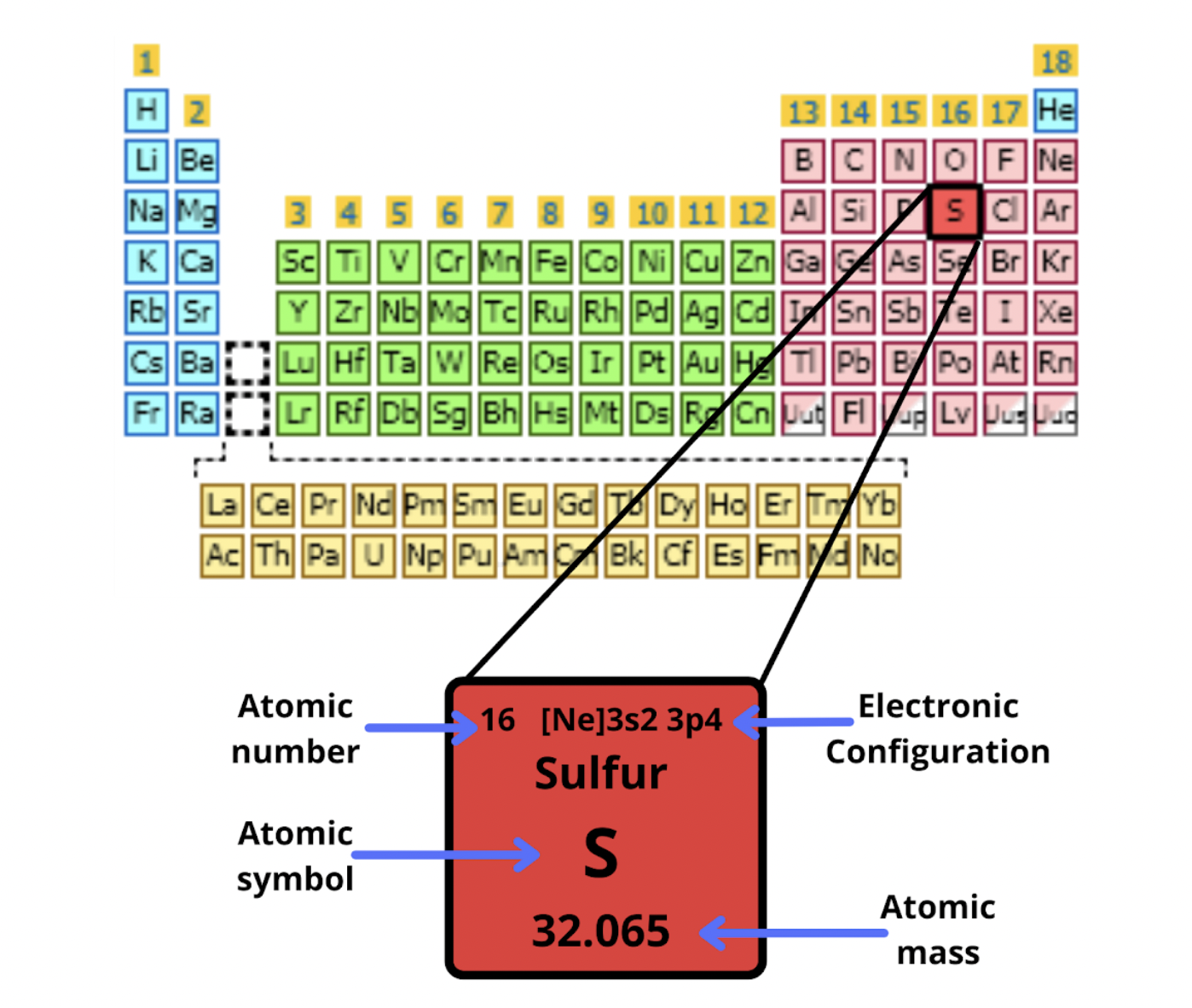 The information that we can infer from the above-mentioned Sulfur box is as follows:

• The electronic configuration of Sulfur is [Ne] 3s23p4.

• The atomic symbol of Sulfur is S.

We will use this information to draw the Bohr model of Sulfur atom.

We will begin by drawing the nucleus of the Sulfur atom.

As the nucleus of an atom comprises protons and neutrons we will first calculate the number of these atomic species.

The atomic number of an atom is equal to the number of protons in that particular atom.

In the case of the Sulfur atom, the atomic number is 16.

Therefore, the number of protons in the Sulfur atom is also 16.

Let us now calculate the number of neutrons in the Sulfur atom.

The number of neutrons is obtained by rounding up the atomic mass to the nearest whole number and then subtracting the number of protons out of it.

The formula for the number of neutrons is given as:

Hence, the number of neutrons in the Sulfur atom ═ 16

Now, we will draw the nucleus of the Sulfur atom. 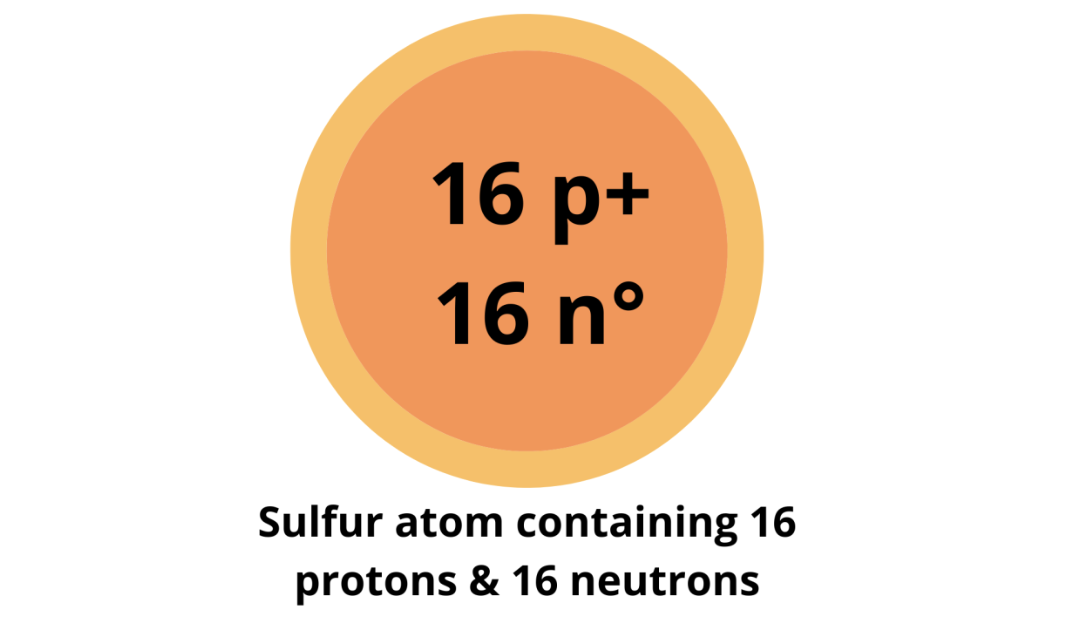 Therefore, the nucleus of the Sulfur atom appears as drawn above. Here, p+ represents protons while n° represents neutrons.

Thus, the Sulfur atom consists of 16 protons and 16 neutrons.

In the next step, we will draw the shells containing electrons in the sulfur atom.

Let us first calculate the number of electrons in the sulfur atom.

The number of electrons in an atom equals that atom’s atomic mass.

Therefore, in the case of the sulfur atom, the number of electrons = atomic mass = 16.

Hence, the sulfur atom consists of a total of 16 electrons.

Now, we will draw the sulfur atom’s first orbit or K shell.

For this, we will have to calculate the number of electrons in the K shell.

But, before, we start drawing the shells of the sulfur atom, we have to understand the rule for accommodating electrons inside a shell.

However, K shell is an exception to this rule. The K shell of any atom always consists of 2 electrons placed at the 12 o’clock position.

Now, we will draw the K shell of the sulfur atom. 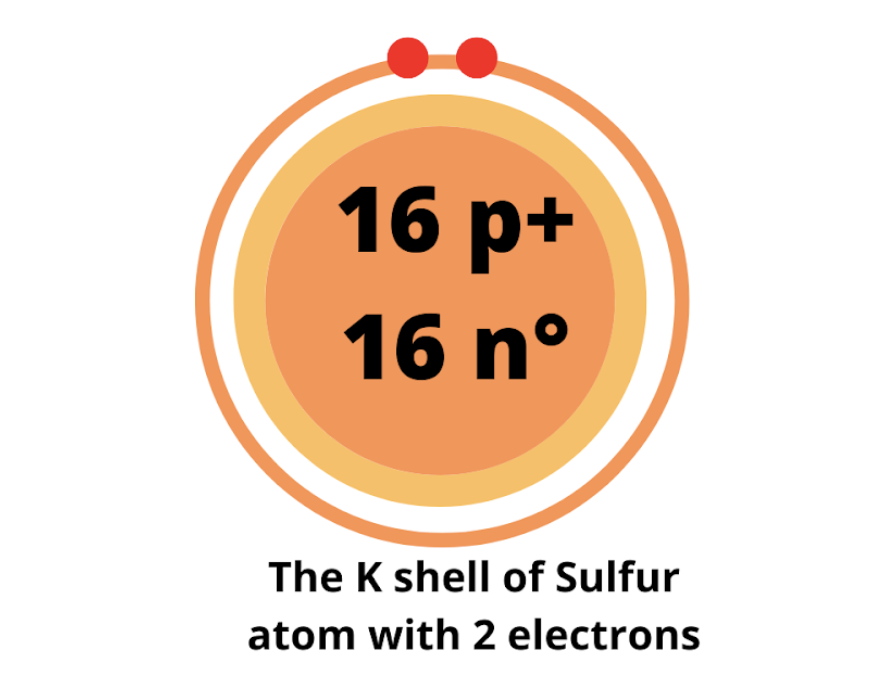 Now, we will calculate the number of electrons in the L shell of the sulfur atom.

Therefore, the number of electrons present in the L shell of sulfur atom ═ 8

As discussed earlier, we will fill these electrons in a group of 4 in a clockwise manner.

After filling 4 electrons the L shell of the sulfur atom appears as follows: 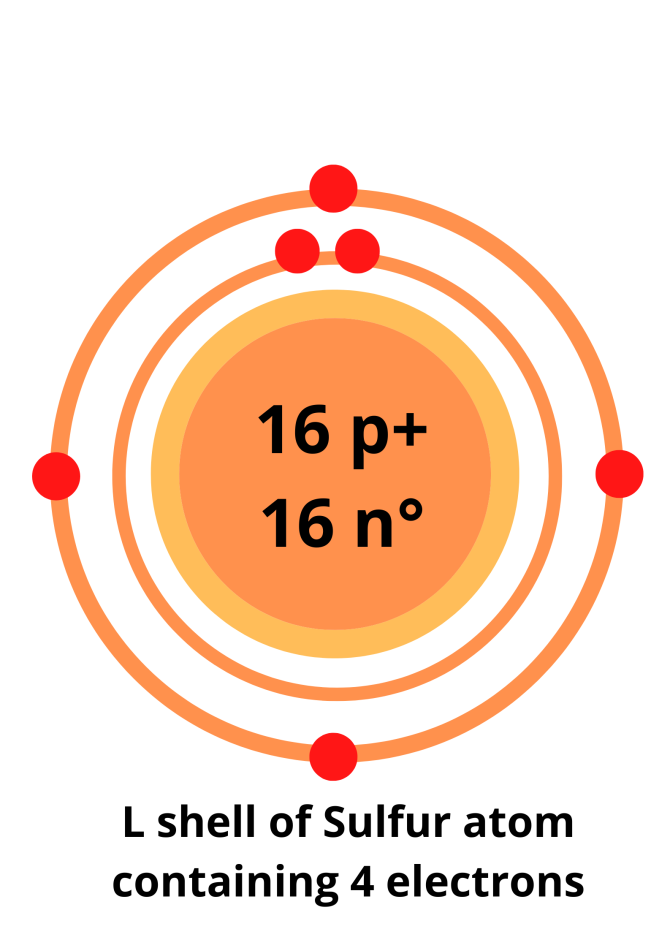 Now, we will fill the remaining 4 electrons in this shell. 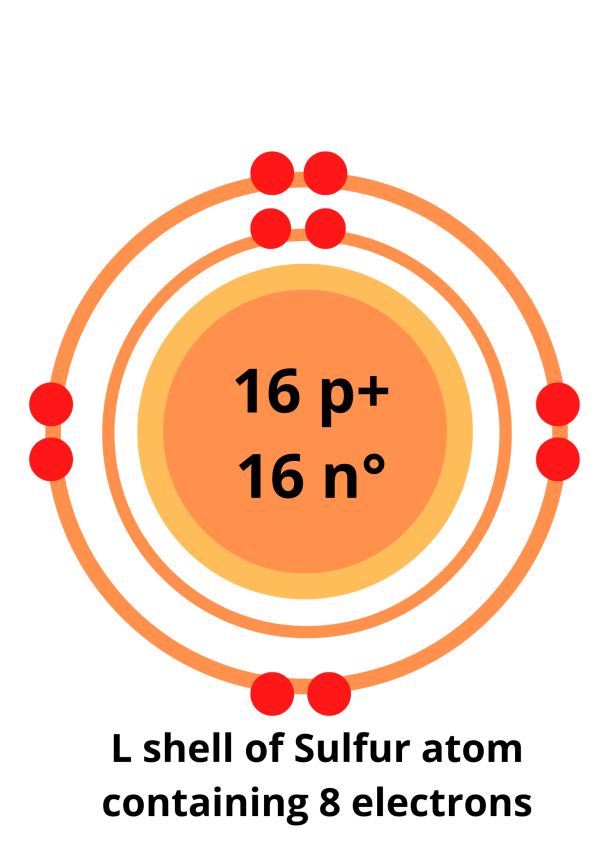 Therefore, the completely filled L shell of the sulfur atom, consisting of 8 electrons, will appear as shown in the above figure.

Now, we will move forward to draw the M shell of the sulfur atom. For this, we will first calculate the number of electrons that can be housed in this shell.

The sulfur atom with the M shell containing 4 electrons appears as follows: 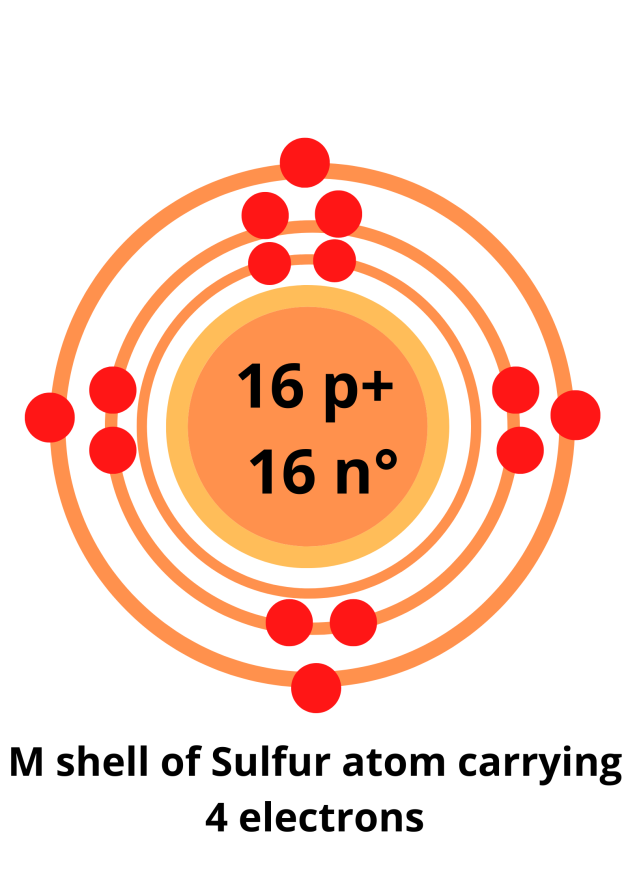 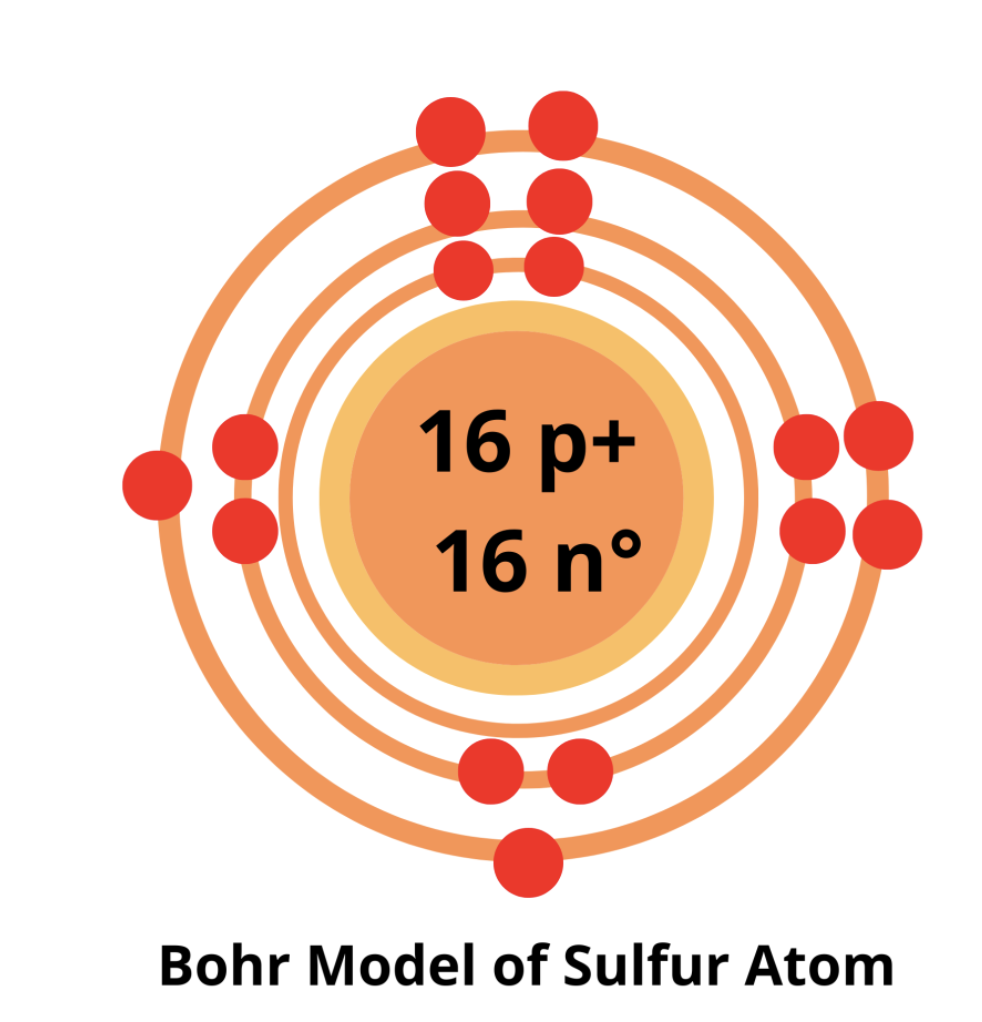 Hence, the final Bohr model of the Sulfur atom consists of 16 protons, 16 neutrons, and 16 electrons.

The 16 protons and neutrons are housed in the nucleus of the atom while the 16 electrons are filled in the three shells i.e. K, L, and M shells as 2, 8, and 6, respectively.

The Lewis structure of an atom represents the nucleus together with the valence electrons of that particular atom. As the electrons are represented in the form of dots, this model is also known as the electron dot structure.

It is a visual representation of the atomic structure. The Lewis model of the sulfur atom is represented as follows: 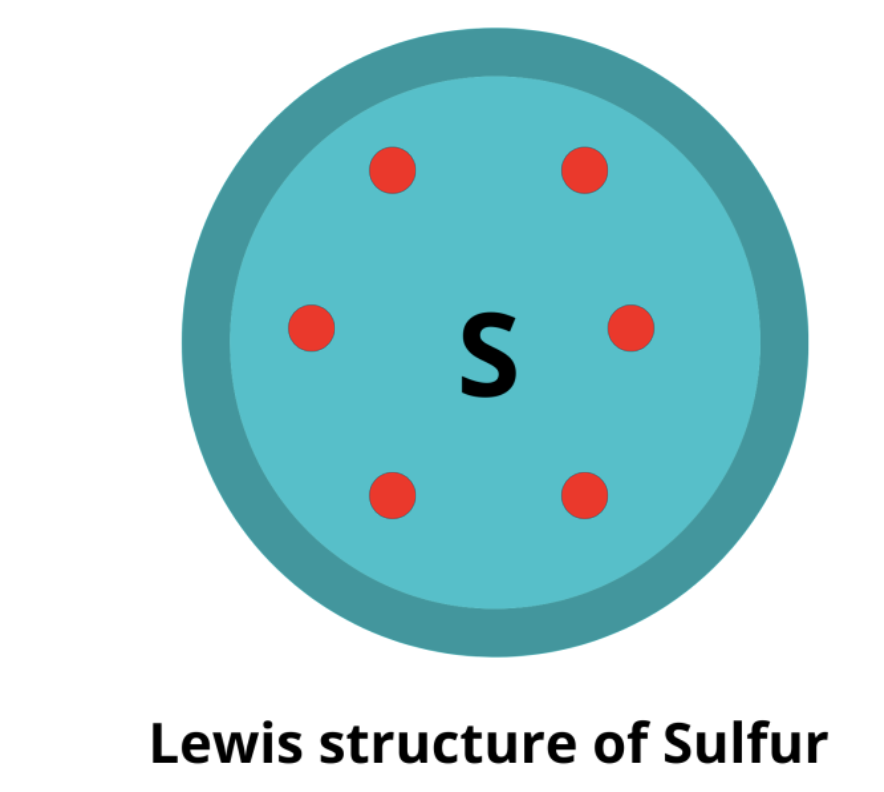 • The final Bohr model of the Sulfur atom consists of 16 protons, 16 neutrons, and 16 electrons.

• The protons and neutrons are placed inside the nucleus while the electrons are housed in three shells i.e. K, L, and M shells as 2, 8, and 6, respectively.