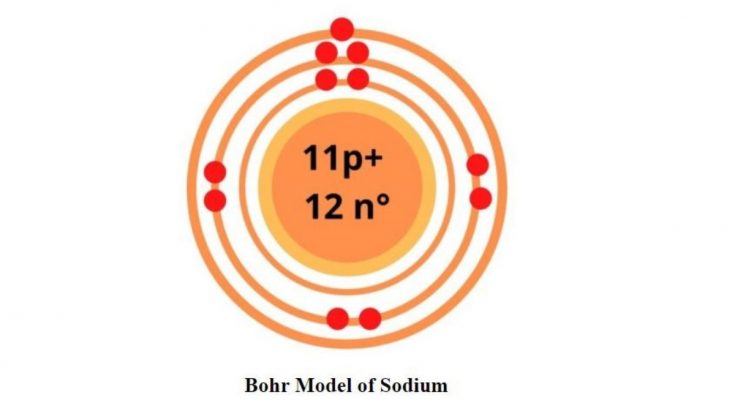 Sodium is a highly reactive metal element. It has the atomic number 11 and is represented by the symbol Na. It belongs to group 1A of the periodic table and hence, is an alkali metal. It is silvery-white in appearance and exists in nature in the form of minerals such as sodalite, rock salt, feldspar, etc.

It is a major ion found in the extracellular fluid of many organisms including humans and thus, forms an essential element. It also helps in maintaining many important body functions like osmotic equilibrium, blood pressure, blood volume, etc.

Most of you aren’t aware of the Bohr model of Sodium. In this article, I will teach you the concept to draw a Bohr diagram and explain it in a very simple and basic manner.

So, Let’s get started.

The Bohr-Rutherford model was given in 1913 after incorporating the findings of Niel Bohr in the already given Bohr model.

The Bohr model is a representation of the atomic structure along with all the atomic particles in pictorial form. It illustrates the number as well as the location of all the atomic species inside an atom.

To understand the Bohr model of the atom we must first recognize the atomic particles and their relevance in the atomic structure. The terms used in the Bohr atomic model are given below:

• Protons: These are the positively charged particles located in the nucleus of the atom. They were named by Ernst Rutherford and are denoted by the symbol p+.

• Shell: The circular path taken by the electrons around the nucleus is known as shell or orbit. These are fixed tracks and the number of electrons that can be accommodated in a single shell also differs.

As per the Bohr-Rutherford model, the shell positioned closest to the nucleus has minimum energy and the electrons residing in that shell are known to be in the ground state. The electrons jump to higher orbits after absorbing a certain amount of energy.

The electrons present in the outermost shell of the nucleus have maximum energy and are also known as valence electrons. These electrons take part in the formation of bonds between different atoms.

The sodium atom has 11 protons, 12 neutrons, and 11 electrons. The electrons are distributed in K, L, and M shells around the nucleus.

Sodium is an alkali metal and belongs to the Group 1A of the periodic table: 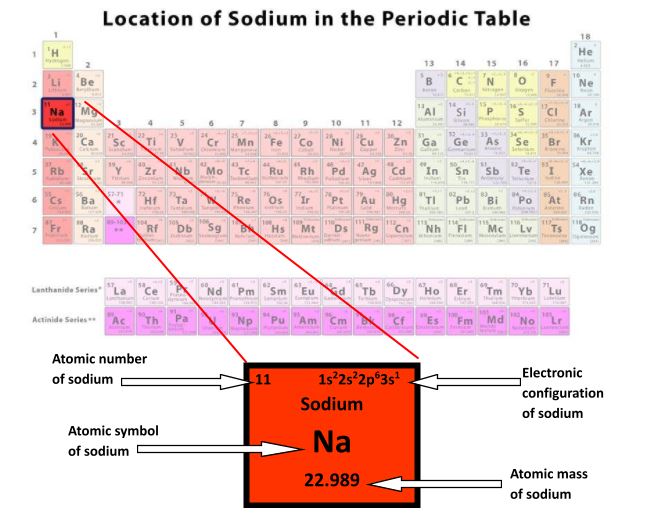 The above-shown sodium box provides us with the following information:

• Sodium is denoted by the symbol Na.

To draw the Bohr model of sodium we must first find out the number of all the atomic particles present in the sodium atom.

First, let us determine the number of protons in the sodium atom.

The number of protons is always equal to the atomic number of an atom.

In the case of the sodium atom, the atomic number is 11.

Hence, for the sodium atom, Number of protons = Atomic number =11

Now, we shall calculate the number of neutrons present in the nucleus of the sodium atom.

The formula for finding the number of neutrons in an atom is given as follows:

The atomic mass of sodium, as mentioned in the sodium box given above is 22.989.

Now, round up this figure to get the nearest whole number.

Therefore, the atomic mass of sodium can be taken as 23.

Now, calculate the number of neutrons by using the above formula: 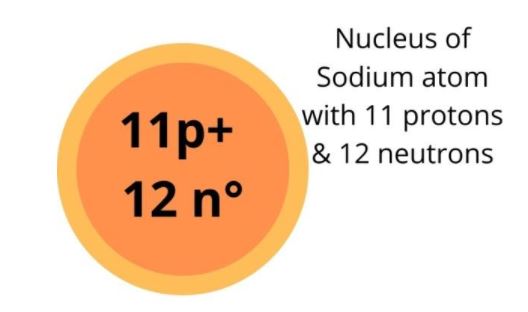 In the above figure, p+ and n° symbolize positively charged protons and neutral neutrons, respectively.

Moving forward, we will now calculate the number of electrons in the sodium atom.

The number of electrons is also equal to the atomic number of atoms.

The maximum number of electrons that are allowed in any particular shell is given by the following formula:

Maximum number of electrons in a shell = 2n2

Now, calculating the number of electrons for the first shell i.e. K shell of the sodium atom:

Thus, 2 electrons can be accommodated in the K shell. After adding the K shell to the nucleus of the sodium atom, it can be drawn as follows: 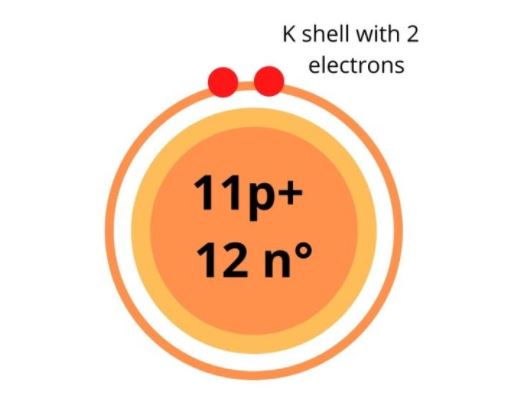 Now, we will calculate the number of electrons for the second shell i.e. the L shell of the sodium atom.

Thus, 8 electrons can be accommodated in the L shell of the sodium atom.

However, a point to be noted here is that in any shell containing more than 2 electrons (i.e. except the K shell) first of all four electrons are added in the clockwise direction at 90° to each other.

After this, the remaining electrons are also added in the group of four in the clockwise direction, albeit, the angle between the electrons keeps on reducing every time.

So, let us add the first four electrons to the L shell of the sodium atom after which it appears as follows: 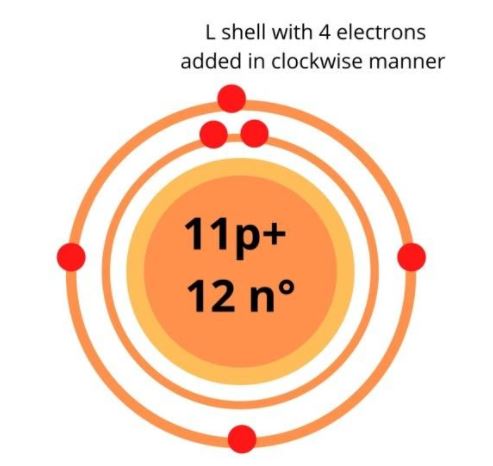 Now, we will add the remaining four electrons to the K shell, again in a clockwise direction but, at an angle less than 90°. 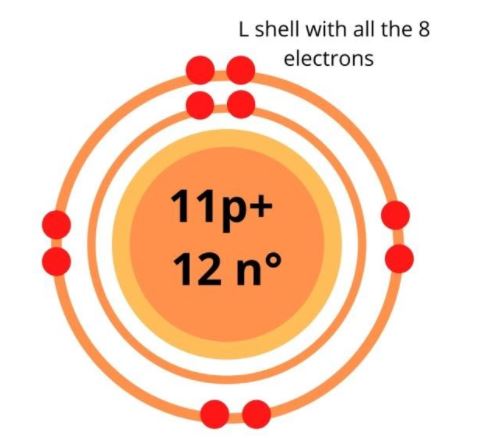 Thereafter, we are left with 1 more electron that will now be accommodated in the M shell.

Finally, after adding all the 11 electrons to the nucleus of the sodium atom, it can be drawn as follows: 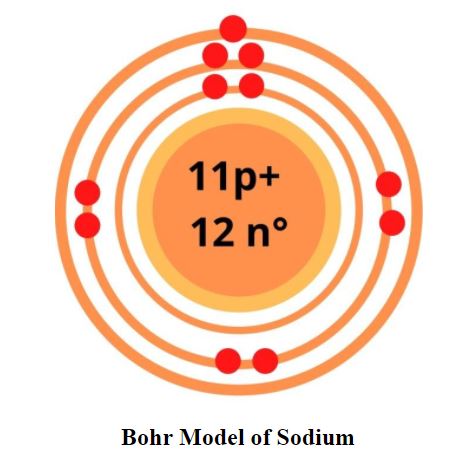 Therefore, the final Bohr model of sodium atom contains 12 neutrons and 11 protons in the nucleus, and 12 electrons revolve around this nucleus with 2 electrons in K shell, 8 electrons in L shell, and 1 electron in M shell.

I have attached the video to explain the same. Have a look.

The Lewis structure of an atom is the pictorial representation of its valence electron around the nucleus.

Here, the nucleus is represented with the atomic symbol of the atom and the dots around the nucleus symbolize electrons. This is also known as an electron dot diagram.

As seen in the previous section, the sodium atom consists of 1 valence electron. Therefore, the electron dot structure of sodium is given as:

Answer: Not absolutely correct but, the Bohr model identifies many characteristics of an atom correctly.

Question: What is wrong with Bohr’s model?

Answer: Although there can be many complications associated with this model, the two main problems are that it works great for single-electron atoms such as hydrogen but is not as reliable for multi-electronic atoms.

Also, it does not consider the subshells viz. s, p, d, f, etc. while talking about the housing of electrons.

A few important properties of sodium are given below:

• It also reacts with metal halides resulting in the formation of metals and sodium chloride.

• The electronegativity of sodium as per the Pauling scale is 0.9.

As per the Bohr model, the sodium atom consists of 11 protons, 11 electrons, and 12 neutrons.

The protons and neutrons are present inside the nucleus of the atom due to which it acquires a positive charge.

The electrons are said to revolve in a definite path around the nucleus. These circular paths are known as orbits or shells.

The number of neutrons in an atom is given by the formula:

The electrons in the sodium atom are arranged in 3 shells viz. K, L, and M shell containing 2, 8, and 1 electron, respectively.

The maximum number of electrons that can be accommodated in a shell is given by the formula 2n2.