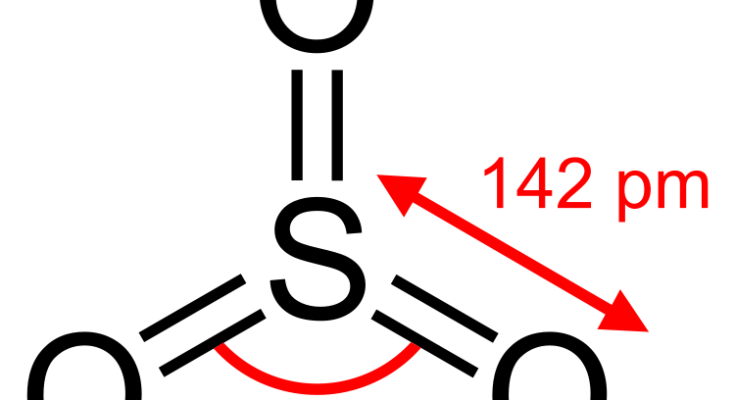 Sulfur trioxide is a compound with the chemical formula SO3. This compound is of great importance and studied widely as it reacts with the water present in the air to produce sulfuric acid.

When this sulfuric acid, in the gaseous state, mixes with the rain and falls on the Earth, it is called acid rain. The sulfur trioxide is usually colorless and oily but is highly corrosive in nature.

Also, it is called battery acid and is used to manufacture acids, fertilizers, lead-acid batteries, in the pickling of metal, purification of petroleum, and others.

The lewis structure is also called an electron dot structure which determines the number of valence electrons present in an atom.

Moreover, they also describe how these valence electrons are participating in the bond formation to form a molecule.

Also, the Lewis structure helps with figuring out the number and nature (single, double, and triple) of the bond shown with the help of lines.

This structure is an integral component for anyone who is beginning to study atomic chemistry.

To understand these diagrams, it is essential to know how the number of valence electrons has been calculated. The atomic number of the sulfur is 16 which makes its electronic configuration 1s2 2s2 2p6 3s2 3p4.

As the p shell needs to accommodate 6 electrons, there is a need for two more electrons to complete the 3p shell. On the other hand, the atomic number of oxygen is eight that make its electronic configuration 1s2 2s2 2p4.

Again, there is a need for two more electrons to stabilize the 2p shell. Now, the Lewis structure needs to be drawn in such a manner that 3p and all 2p shells are filled.

The electrons that lie in the outermost shell of an atom that readily takes part in the bond formation are called valence electrons.

So, in the case of sulfur trioxide, six valence electrons in every single atom of sulfur and three atoms of oxygen participate to form one molecule.

As per the octet rule, the maximum number of electrons that can be filled within a valence shell is eight.

When they’re less than eight electrons, only then an atom undergo a bond formation either by accepting or donating valence electrons to achieve a stable condition like noble gases.

Both in sulfur and oxygen, there is a dearth of two valence electrons each.

How Sulfur disobey the octet rule?

The catch is in the case of Sulfur which belongs to period 3 of the periodic table.

Sulfur can expand its octet and can accommodate up to 12 electrons because of which, it does not follow the octet rule.

Sulfur can do so as it has access to energetic 3d-subshell for bonding.

As there is a small energy difference between 3p and 3d shells, with the help of a little excitation, an unpaired electron can move from the 3p shell to the 3d shell easily.

In case when all the valence electrons are in the 3s and 3p shell, sulfur can produce up to two shared covalent bonds and two lone pairs.

But, when one valence electron reaches 3d shell, sulfur can produce four shared covalent bonds and one lone pair.

It is essential to understand that the sulfur can expand its octet to incorporate a maximum of ten to twelve electrons.

Moreover, when one more valence electron reaches the 3d shell, the total number of unpaired electrons becomes six in the sulfur.

The formation of more covalent bonds means the release of more energy, allowing the final configuration to be much more stable.

Lewis structure of SO3

The sulfur trioxide is a tetra atomic chemical molecule where both the sulfur and three oxygen molecules bond with an equal number of valence electrons.

The diagram is drawn showing dots of valence electrons around the symbol of both sulfur and oxygen atoms with lines predicting bond formation.

The Lewis structure of sulfur trioxide (SO3) molecule is drawn by:

First, look for the total number of valence electrons in a single sulfur trioxide (SO3) molecule, which is twenty-four.

Next, look for how many more valence electrons are needed to complete all the octet in the sulfur trioxide (SO3) molecule.

It is six for a single sulfur trioxide (SO3) molecule, where both sulfur and each oxygen atom need two valence electrons to stabilize their atom.

Next, look for the number and type of bonds forming within a single sulfur trioxide (SO3) molecule. It is three double covalent bonds between sulfur and oxygen atom each.

Lastly, look for the central atom, which will be sulfur in this case. Finally, draw the skeleton as: 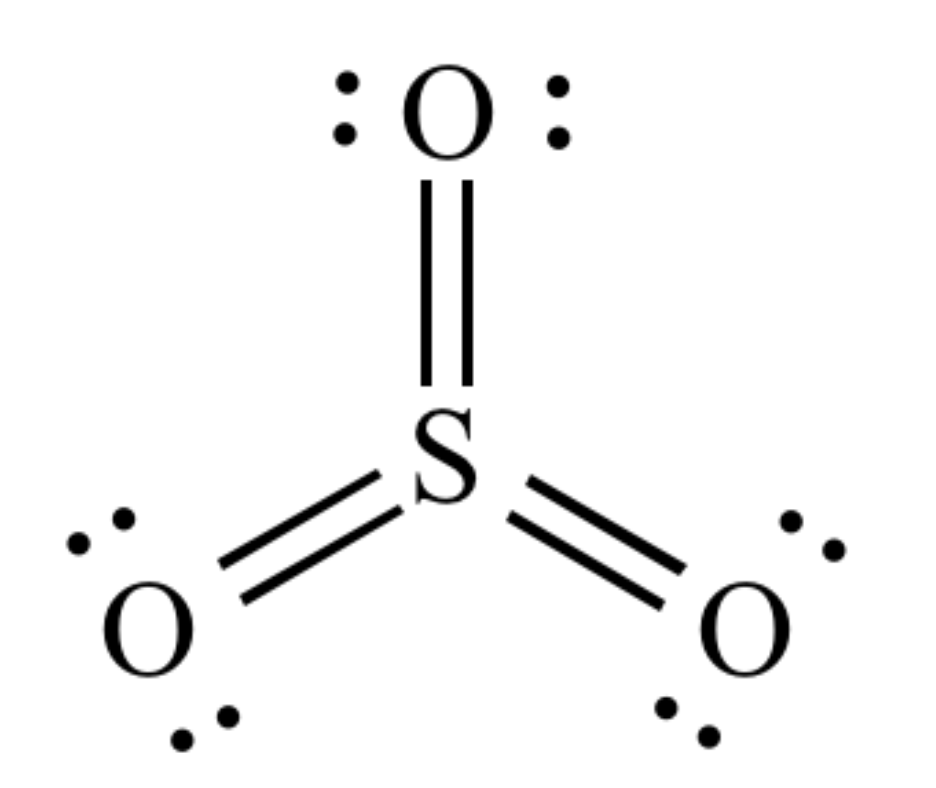 Why SO3 forms double bonds?

Because of equal formal charge distribution throughout the atom, double covalent bonds form in SO3.

Now, the formal charge needs to be neutralized to achieve a stable condition, so having +3 at centre and -1 at the ends cannot happen. It is the reason why three double covalent bonds are formed in SO3.

Molecular Geometry of Sulfur Trioxide (SO3)

The above image clears that the bond angle among oxygen-sulfur-oxygen (O-S-O) atoms have to be more than 90°.

Moreover, through the valence shell electron pair repulsion (VSEPR) theory, the structure of sulfur trioxide (SO3) is found to be bent shaped or trigonal pyramidal or trigonal planar, where the bond angle is 120°.

As the equal double bond is formed between each oxygen and a sulfur atom and no lone pair exists on the central atom (sulfur), there is no distortion in the bond angle what-so-ever.

Moreover, there is equal charge distribution around the sulfur which is the reason why the sulfur had to expand its octet for this Lewis structure of SO3.

Therefore, the SO3 molecule turns out to be non-polar in nature. Check out the article written on the polarity of SO3.

The Hybridisation of Sulfur Trioxide (SO3)

The hybridization of SO3 is sp2. It is determined with the help of formula:

In a single shared double covalent bond, there exists one sigma (σ) bond and one pi (π) bond. 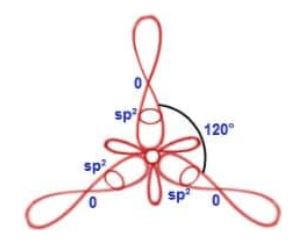 The SO3 belongs to period 3 of the periodic table in which elements tend to expand their octet and accommodate more than eight valence electrons. It is interesting to know that this behavior is not exceptional as most elements possess this behavior except period two elements. The hybridization in SO3 is sp2 because of the formation of one sigma bond and one pi bond.