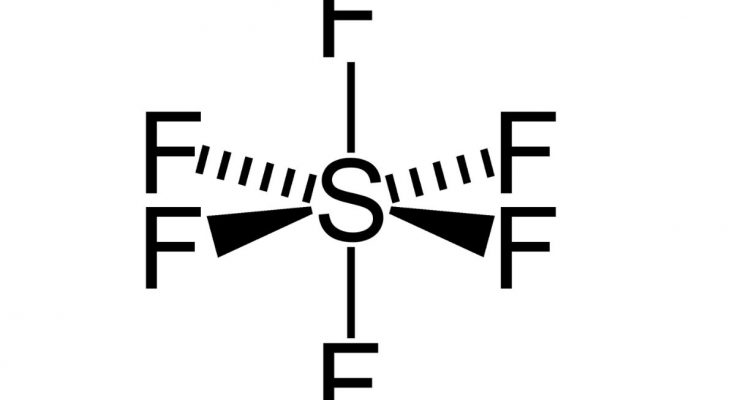 SF6 or sulfur hexafluoride is an inorganic and one of the most stable gases that are known in chemistry. This gas has more density than air. The general identification of the gas can’t be done because it is odorless and colorless in nature. There is also no taste of the gas as such.

SF6 is noncombustible and nonflammable in nature. However, under extreme heat and pressure, it might burst out of its storage container and rocket into the air.

SF6 can react with a few compounds to further disassociate and take part in the following reactions.

SF6 otherwise is not easily soluble in water and is soluble with non-polar organic solvents.

This gas when inhaled by humans can get transferred to the lungs and any kind of skin or eye contact can cause frostbite.

Below is the markdown of the different properties of SF6.

The gas is transported as a liquefied gas compressed by its own pressure but does not require any kind of special handling or storage.

The nature of bonds, types of bonds, and how these bonds look like, all this we cover while we make the Lewis structure of any compound.

To make a Lewis structure you need to be thorough with your basic concepts of octet rule, valence electrons, and lone pairing.

Well, if not then let us revise them together.

Valence Electrons: In simple terms, valence electrons can be defined as the electrons that are present in the outer shell of an atom.

These electrons are distributed in different energy shells, namely s, p, d, and f. Valence electrons are very important in determining various properties of the atoms.

This is what every atom is trying to achieve by making bonds with neighboring atoms. And that is how different compounds are formed with different and varied chemical and physical properties.

Now coming back to the Lewis structure of SF6, let us find the valence electrons and then draw the final Lewis dot structure.

We have two kinds of atoms in SF6, sulfur, and fluorine.

There is one atom of sulfur whereas there are 6 atoms of fluorine.

Let us start making the Lewis structure by knowing about the valence electrons of Sulfur and Fluorine.

Has the question arisen in your mind that why the valence electrons in sulfur are 6?

Well, if yes then let us give you the answer to it.

The atomic number of sulfur is 16. These are the total number of electrons that are present in this element. If we start filling these electrons by the electronic configuration method then we will have the following arrangement,
1s2 2s2 2p6 3s2 3p4

In the outermost shell, we have 6 electrons that are also known as valence electrons in the case of Fluorine.

The central atom here is Sulfur as it is less electronegative than Fluorine. This is because the outer shell of Fluorine has 5 electrons and it needs one more electron to reach stability, which is easier to attain.

As there are 6 atoms of Fluorine, there will be a formation of 6 bonds between Sulfur and Fluorine. Sulfur will share 6 electrons with one electron of each Fluorine atom.

Here is a pictorial representation of the same.

A bond formation is shown by a single straight line and lone pairs of electrons are shown by two dots for each pair.
Now when we know that how many bonds are getting formed, let us see how many lone pairs will be made.

When 6 bonds are formed, 12 electrons will be used and that leaves us with 36 valence electrons. 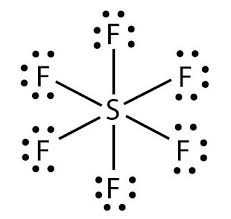 Did you see that there are more than 8 electrons in the outer shell of Sulfur?

The reason for this is that some atoms can expand their valence shells. When the outermost shell can accommodate more electrons these kinds of conditions occur.

So there will be 18 lone pairs of electrons, with 36 electrons in total.

The octet of all the Fluorine atoms is complete and as Sulfur is an exception its octet is expanded.

This is all about the Lewis Structure of SF6, now let us look at the hybridization and molecular geometry of the compound.

Lewis structure is a representation of bond formation. But if you need to understand how a compound looks on a plane then we need to find its hybridization and further molecular geometry.

Here is a pictorial representation of how the electrons are filled in the different energy orbitals. 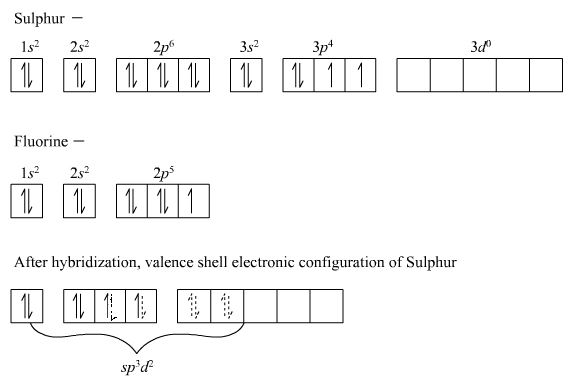 The total number of electrons in Sulfur is 16 so the shells are filled in different energy levels according to their capacity and hierarchy level. Thus, in-ground state the hybridization of Sulfur is 3s2 3p4.

For Fluorine, in-ground state the hybridization is 2s2 2p5.

Now, when these two atoms bond together and the compound enters an excited state the electrons of the Sulfur move from energy level p to energy level d.

Hence, the configuration becomes sp3d2. Thus, the hybridization of SF6 is sp3d2.

This happens because Sulfur can expand its valence shells to make bonds in order to reach stability.

There are Fluorine atoms all around Sulfur which gives the compound a kind of symmetry when we look at it on a planar level. 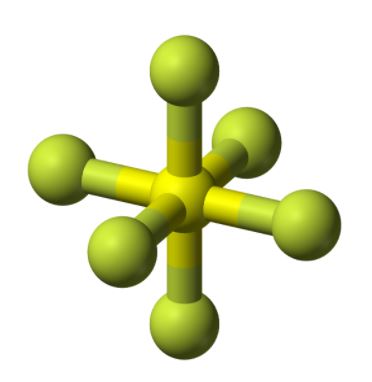 When we look at the molecular geometry of any compound we get to see a 3-D image of how the atoms are distributed which we cannot identify while making a Lewis Structure.

With the help of molecular geometry, we can find bond angles as well. For SF6 the bond angle is 90 Degrees as the atoms are distributed evenly around the central atom Sulfur.

You can find the shape of a compound with the help of the VSEPR theory. This theory deals with electron repulsion and compounds taking up a shape to reach stability.

Here, in SF6, there are 6 sigma bonds between Sulfur and Fluorine and 3 lone pairs on each Fluorine atom. These lone electrons repel each other and maintain symmetry around the central atom.

That is why the shape that SF6 takes is octahedral, which can be termed as its molecular geometry too.

Below is the MO diagram of SF6. 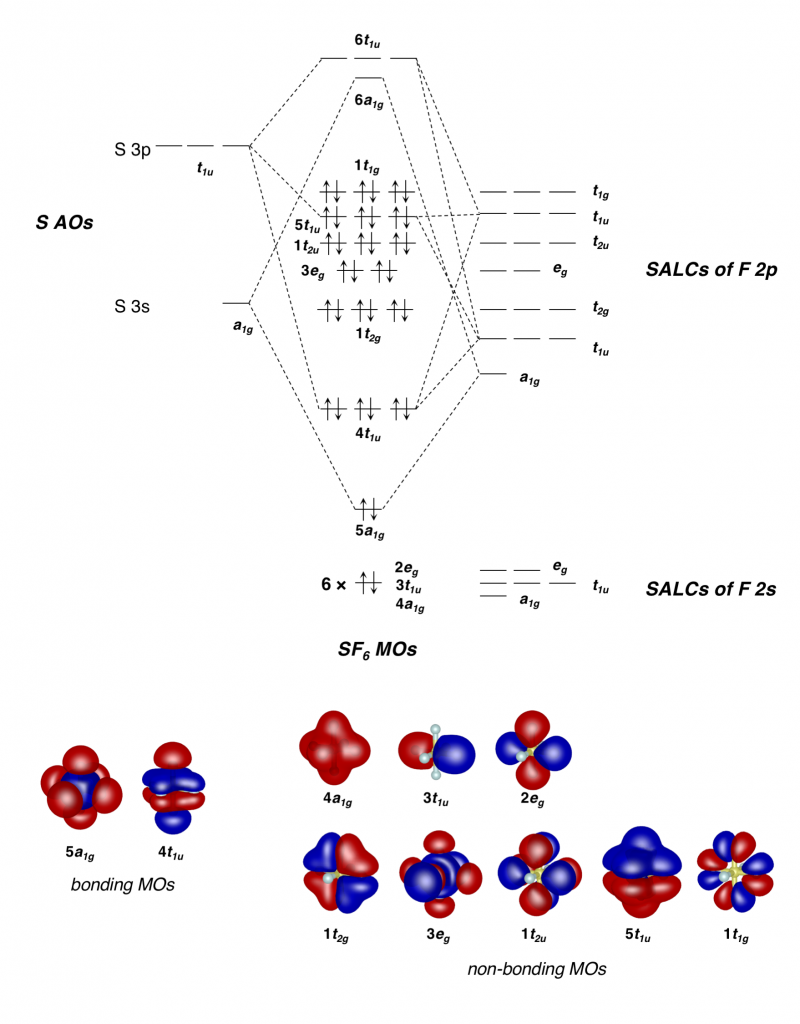 You can watch this video to learn how to make a MO diagram step-by-step.

The polarity of a compound is a major topic of discussion whenever we take a deep look at its structure and properties.

The distribution of charge is similar all through the compound of SF6 which makes its dipole moment 0. Due to the symmetric arrangement, the dipole moment is canceled out.

And this makes SF6 non-polar in nature.

You must also refer to the article written on the polarity of SF6.

As we have come to the end of this lesson let us see what we have learned so far in this article about the SF6 compound:

We hope you had a fun time reading about this interesting compound.

If you have any doubts you can reach out to us and we will be happy to clear your doubts.