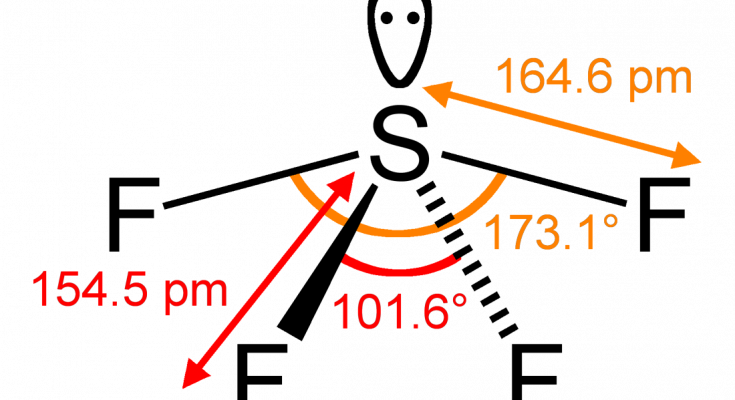 SF4 or sulfur tetrafluoride is a compound that has a distinct odor of sulfur or rotten eggs. This compound is generally identified as being a colorless gas.

SF4 is a toxic gas if inhaled and can cause serious irritation in the skin, eyes, or mucous membrane.
If it gets reacted with water then toxic fluoride and sulfur oxide fumes are formed along with an acidic solution.

The same happens when it reacts with some acid.

When SF4 gets exposed to extreme heat, there are chances that the container with this compound may burst.
The compound is assumed to be stable only when the right storage conditions are met. Otherwise, it is a hazardous compound, capable of strong reactions.

Workers who get exposed to vapors of this compound may experience shortness of breath, headache, eye and nose irritation, vomiting, and more.

SF4 has the potential to cause serious damages as well as problems like cancer but the data has not been accessed fully to be termed as true.

Now when we know the basic things about the compound, we should move to see other properties of SF4 like polarity, geometry, and more.

If you want to understand the properties of any compound better then you have to study its Lewis structure.
Within a Lewis Structure, atoms come together as either lone electrons or by forming a bond.

The Lewis structure helps one to understand the sharing of electrons between the central and neighboring atoms within a compound.

Here the central atom is Sulfur and the neighboring atoms are Fluorine. This is the general idea of how and why Lewis structures are made.

Let us look at how SF4’s Lewis structure can be formed.

To draw the structure of SF4 we will need to know the total number of valence electrons that exist in SF4.

The central atom in this compound is Sulfur. Apart from this, there are 4 other Fluorine atoms.

As there are four atoms of Fluorine, the total number of valence electrons of Fluorine are = 4*7 = 28

Therefore; The total number of valence electrons in this compound comes to be,

Now as we know what is the total number of valence electrons, we can look ahead and see how the bond formation takes place in SF4.

As we told you already that the central atom here is Sulfur, all the other atoms will form bonds with this central atom.

In this case, the other atoms are those of Fluorine.

Here the number of other atoms is 4 that means that there will be four bonds in this compound between Sulfur and Fluorine.

When these bonds are formed four valence electrons of both Fluorine and Sulfur are going to be used.

The number of Valence Electrons left on Sulfur is 2 and on each Fluorine atom, 6 valence electrons are left.

Thus the total number of remaining electrons is 26. Sulfur will have 2 valence electrons or 1 lone pair and 4 bonds.
Each Fluorine atom will have 3 lone pairs and 1 bond. 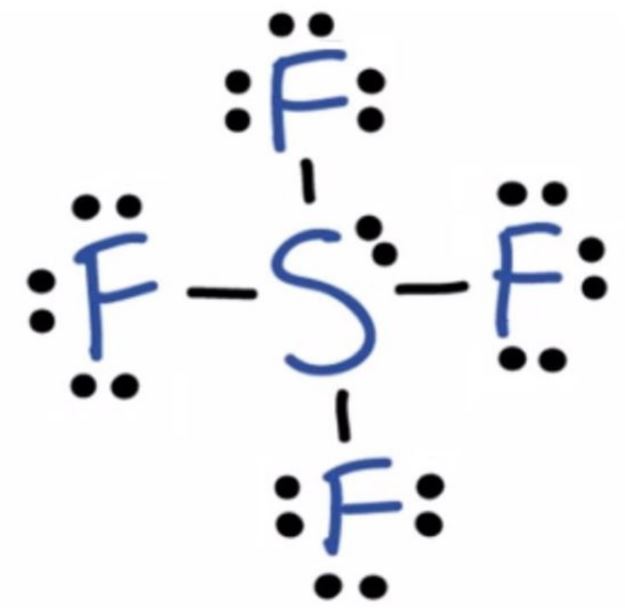 Let us now move to SF4’s hybridization after we have seen its Lewis Structure.

Hybridization is a phenomenon that allows us to understand the geometry of the compound.

In the SF4 compound, there are 4 bonding pairs on the central atom and 1 lone pair of electrons. Thus, these 5 valence electrons occupy 5 hybridized orbitals.

Below are the orbitals that this compound occupies: 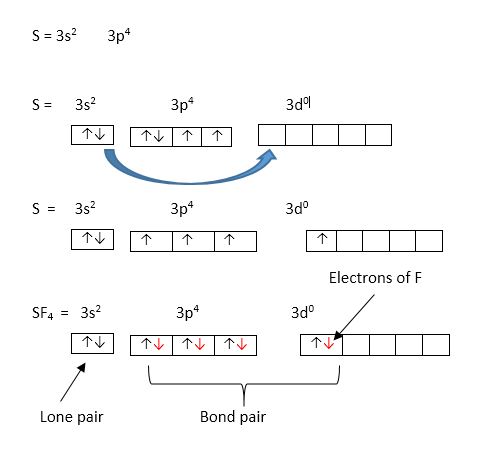 You will be able to understand what we just told you better with the help of the above-given diagram.

The hybridization of any compound depends solely and largely on its Steric number.

Thus to find out the Steric number of SF4 we will need to use the below-given formula.

Hence, the Steric number of SF4 is 5. Thus, the hybridization of SF4 is sp3d.

Now, let us move to see what the molecular geometry of SF4 is.

Any compound’s molecular geometry is very easy to find.

All the compounds which have this formula are known to have trigonal bipyramidal molecular geometry.

The lone pair present on the central atom repels the bonding pair of electrons. This is why this compound SF4 looks like a see-saw in shape.

See the below diagram to understand how the atoms are distributed amongst the plane for the SF4 compound.

After looking at the Lewis structure and molecular geometry of the compound it gets relatively easy to find the polarity of a compound.

If we look closely at the structure then we see that there is one lone pair on the central atom with 4 bonding pairs of electrons.

This leads to an asymmetric arrangement.

Thus, this brings us to the conclusion that SF4 is Polar in nature as the dipole moment is not zero.

Read out the detailed article on the polarity of SF4.

It is important to learn about a MO diagram of a compound because it shows us how the bonds are formed within the compound.

The whole concept of this diagram is heavily based on Molecular Orbital Theory.

It becomes easy to explain the structures and bonds in compounds once we know how their MO diagrams look like.

Below is the MO diagram which you can read and study to know about SF4 in more detail. 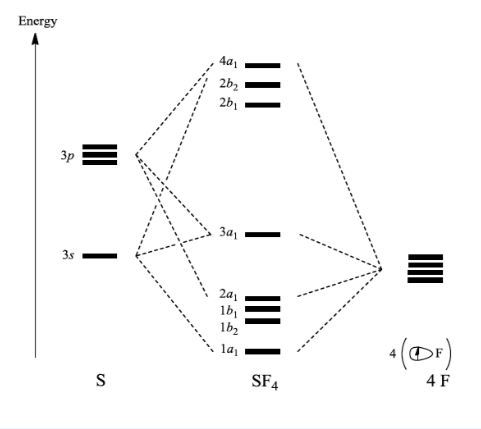 Now as you have looked at the MO diagram we can move ahead to discuss the properties of SF4.

Here are some of the applications of SF4 that you should know about:

Let us now move ahead and wrap up our session of learning about this compound in detail.

There is a total of 34 valence electrons in SF4 and on the central atom, there are 4 bonding pairs of electrons and 1 lone pair of electrons. Fluorine has 3 lone pairs on each of the four atoms.

The hybridization of this compound is sp3d in nature.

Also, the compound is polar in nature as the dipole moment is not zero for SF4.

The molecular geometry of SF4 according to its molecular formula and hybridization is trigonal bipyramidal.
The shape generally resembles a see-saw and this shape is due to the repulsion in bonding and lone pairs of electrons.

We hope that this article was insightful enough and you got the basic idea about this interesting compound.
In case you have any doubts regarding the article, please feel free to reach out to our team.