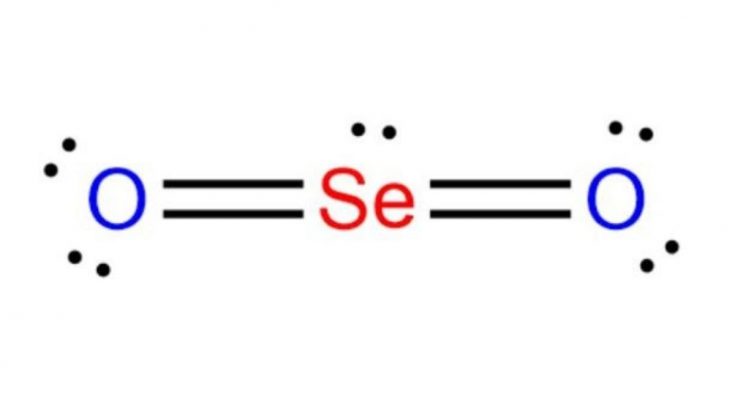 The chemical formula of selenium dioxide is SeO2. It is a unidimensional polymer chain having alternating selenium and oxygen atoms.

This chemical compound is of great importance because of its corrosive nature for metals only when in contact with water. Selenium dioxide reacts with water to produce selenic acid that initiates corrosion in most of the metals.

Besides this, selenium dioxide reaches the soil and water through coal or oil combustion and weathering of rocks. Even though selenium is beneficial for living organisms if consumed in smaller amounts but pertains to toxic effects such as deformed embryos and reproductive failure if exposed to larger quantities.

There are various methods of preparing selenium dioxide, but the most preferred method is the dehydration of selenous acid.

Let us study its lewis structure, geometry, and hybridization.

Also called the Lewis dot structure, it is a pictorial representation of the behavior and arrangement of valence electrons within an atom.

It uses dots to represent valence electrons and lines to show bonds.

In a typical structure, the atomic symbols of participating atoms are at the center, and valence electrons are in pairs around them.

The need for such a structure is to get a preliminary idea of how atoms bond to produce a new chemical compound with new chemical properties altogether.

Steps to Draw the Lewis structure of Selenium Dioxide

The Lewis structure begins with determining the number of valence electrons already available with one selected molecule and how many are further needed to achieve a stable condition. Hence,

Valence electrons for selenium are six and for oxygen is also 6.

Step 2: Find out the number of valence electrons further required to complete the octet of all three participating atoms in selenium dioxide.

By this rule, only six valence electrons are further needed by one selenium dioxide molecule.

Step 3: Find the central atom in the selenium dioxide molecule.

Furthermore, this can be confirmed by comparing the electronegativity values of selenium and oxygen.

An element with the lowest electronegativity value becomes the central atom because it has to make the maximum number of bonds.

This will be studied in detail under the polarity subheading.

Step 4: Draw the structure by writing already available valence electrons in pairs around each participating atom in a linear structure.

Below is the image of the lewis structure of the SeO2 molecule. 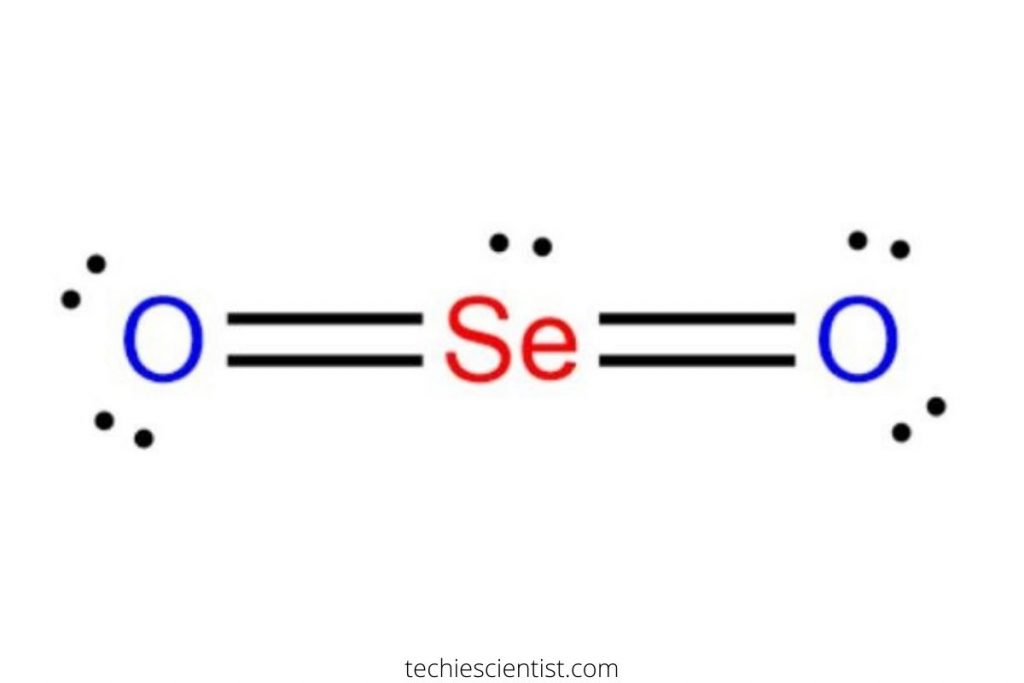 Can there be any other Lewis structure of Selenium Dioxide?

No, it is not possible as each atom within a molecule tries to achieve a stable condition.

We can prove it with the help of formal charge distribution on each participating atom.

Let us understand this better with the help of another Lewis structure of selenium dioxide.

In the below-mentioned diagram, only one double bond is forming between selenium and oxygen atom.

In this structure, the formal charge distribution is not equal, due to which it is unstable and not possible.

Let us calculate it for:

Below is the image of the incorrect lewis structure of SeO2.

Most people confuse the molecular geometry of selenium dioxide as linear because of its Lewis structure.

It is crucial to know that the double bond and lone pairs of valence electrons on both ends give selenium dioxide a bent geometry.

We can study this behavior of triatomic selenium dioxide in detail with the help of the Valence Shell Electron Pair Repulsion (VSEPR) Theory.

It says the presence of equal lone pairs of valence electrons on both the ends and double bonds tends to exert a strong force of repulsion in opposite directions.

This force tends to push the oxygen molecules in the downward direction to produce a bent-shaped pyramidal geometry.

This structure can further be confirmed with the help of the steric number that is 4 for selenium dioxide.

Besides this, it is also essential to understand that selenium dioxide is a polymer chain which means it does not exist as a single molecule.

Hybridization of the central atom in selenium dioxide is sp3.

It occurs when mixing and inter-mixing of one 2s orbital with three 2p orbitals takes place that leads to the formation of four new hybrid orbitals having similar energy and characteristics.

It is crucial to understand that one of the four orbitals is donated by another selenium dioxide, as it exists in a polymer chain.

Selenium dioxide in the gaseous state has a similar molecular orbital diagram as that of sulfur dioxide but in the solid state, it exists as infinite polymer chains that are not planar.

Below is the molecular orbital diagram of Selenium Dioxide. 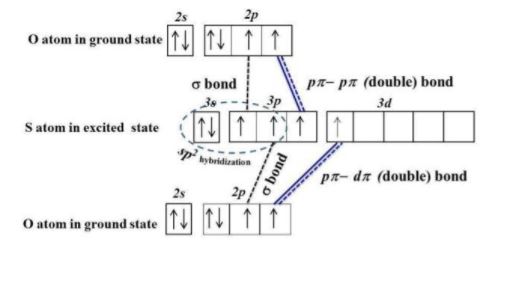 Hybridization and molecular orbital diagrams are mathematical as well as a diagrammatic representations of orbitals behaving in a unique manner during the formation of a bond.

This uniqueness while mixing and intermixing produces new hybrid orbitals of similar energy but new properties.

The new hybrid orbitals are responsible for the formation of new molecules with new chemical properties altogether.

It is important to understand that the molecular geometry and associated chemical properties withhold credibility only for the monomeric selenium dioxide.

Irrespective of equal formal charge distribution the dipole moment in selenium dioxide is 2.62D which makes it a polar molecule.

Polarity is the behavior by which a molecule acts as a magnet due to the separation of charges that forms two separate ends of positive and negative within the molecule.

The polar nature of selenium dioxide can be confirmed with the help of electronegativity values of selenium and oxygen atoms.

For a molecule to be polar in nature, the difference between the electronegativity values of the participating atoms must be more than 0.5.

1. It is used to produce colorless glass as it can correct the iron impurities that impart color to the glass.

2. It is a strong oxidizing agent and is used in the allylic oxidation of alkenes to produce allylic alcohols that further oxidize to form ketones and aldehydes.

3. It is used as a bluish-black anti-rust coating to prevent corrosion in steel.

4. It is an integral part of photo development.

Selenium Dioxide is a classic example for people who wish to study the reason behind the formation of a double bond within a molecule.

From the Lewis structure of selenium dioxide, it is clear that the distribution of unequal formal charge made it impossible for the structure to have only one double bond.

Besides this, it is also important to understand that sp3 hybridization of selenium and polar nature of selenium dioxide withholds credibility for monomeric structure only.

In addition to this, any deviation from the ideal condition in selenium dioxide is mainly due to its polymer chain property. It is important to understand that selenium dioxide does not exist as a single molecule but in a chain form.