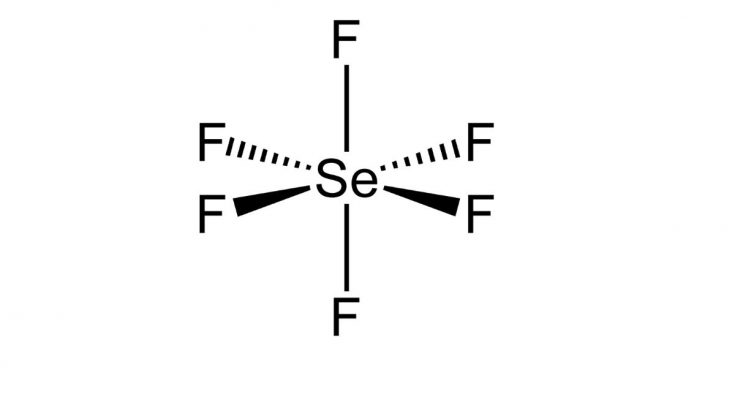 Selenium hexafluoride is an inorganic compound composed of Selenium and fluorine atoms.

It is a colorless, toxic, and corrosive gas with a characteristic odor.

In this article, we will discuss essential concepts required for drawing Lewis structure and predicting geometry, hybridization, and polarity for a given compound.

Lewis structure is a structural formula for representing the arrangement of valence shell electrons around each atom in a molecule.

It is important for predicting the number and type of bonds formed by an atom.

Some compounds can have more than one possible lewis dot structure. In such cases, the one that satisfies the octet rule and has the lowest number of formal charges is the most stable. 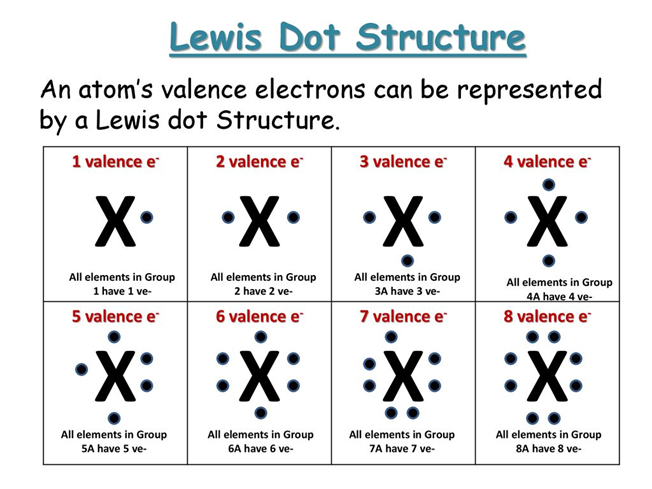 Main group elements prefer to have an electronic configuration similar to noble gases as they are considered to be inert.

Noble gases have 8 valence electrons (except He), and all other main group elements lose or gain electrons to achieve this configuration.

Thus, the preference of having 8 electrons in the valence shell of main group elements is called the octet rule.

It is one of the primitive concepts. Many compounds are stable but do not follow the octet rule. Exceptions to octet rule are-

• Odd electron species can never complete their octet because the sum of electrons is always odd. For example, NO, NO2, etc.

• Hypo valent Species– some species have less than 8 electrons in their valence shell and are still stable. For example, B in BH3, Al in AlCl3, etc.

• Hypervalent Species– some species have more than 8 electrons in their valence shell and are still stable. The atoms with more than 2 shells can expand their octet by including vacant d orbitals. For example, S in SF6, etc.

Step 1: Count the total number of valence shell electrons on the compound

The chemical symbols for Selenium and fluorine are Se and F, respectively. The Lewis dot structure for Se and F are as follows- 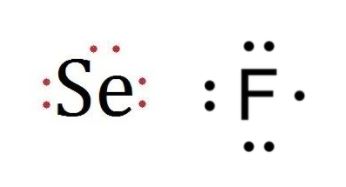 Step 3: Choose a suitable central atom for the compound.

In this step, we have to arrange the side atoms and central atom suitably. 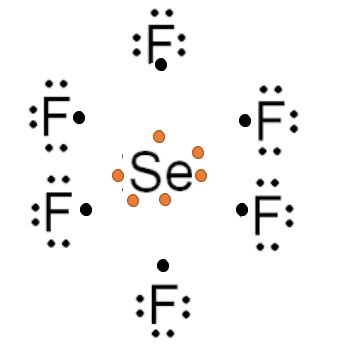 Step 5: Arrange the valence electrons around the elemental symbols. 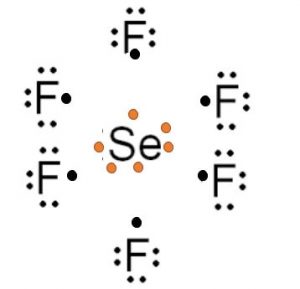 Step 6: Complete the octet of atoms by forming bonds.

All side atoms form a single bond with the central atom. 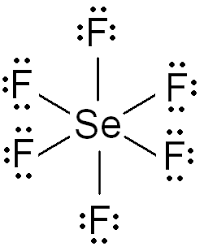 Each F has seven valence electrons in the isolated state. They share one electron with Se to have a fully filled valence shell configuration.

Se has six valence electrons in the isolated state. It shares one electron from all F-atoms.

There are 12 electrons around the central atom. SeF6 is a hypervalent compound as Se can expand its octet because of vacant d orbitals and form more than four bonds.

Step 7: Calculate the formal charge on all atoms.

The net charge on this compound is zero. Therefore, the sum of formal charge on seven atoms should come out to be zero.

Thus, the structure drawn in step 6 is the best Lewis structure for SeF6.

To understand the process of drawing lewis structure better, one can go through this link.

Molecular geometry is the 3D arrangement of atoms in a compound. Exact geometry can be found out only by experimentation in the laboratory.

However, we can use VSEPR theory to predict the shape without experimentation. VSEPR theory stands for valence electron pair repulsion theory.

The valence electron pairs repel each other, and this leads to instability.

To make the arrangement of the electrons stable, the repulsions between them have to be decreased.

As a result, electrons align themselves so that the repulsion is the least, and the distance between them is maximum.

The stable arrangement of the valence electron pairs of atoms helps determine the molecular geometry.

How to Predict Geometry of SeF6 Using VSEPR

Step 1: Count the number of valence shell electrons on the central atom and let it be equal to A (arbitrary variable)

In the case of SeF6, the central atom is Se. Se has 6 valence electrons. (Shown in step1 of drawing lewis structure)

Step 2: Count the number of side atoms and let it be equal to B (arbitrary variable).

In SeF6, there are six side atoms (fluorine) and B=6

In SeF6, there is no contribution of charge and B=6 only.

For SeF6, there are 6 electron pairs.

Step 6: Divide the total electron pairs as bonding and non-bonding. The bonding electron pair is equal to the number of side atoms. 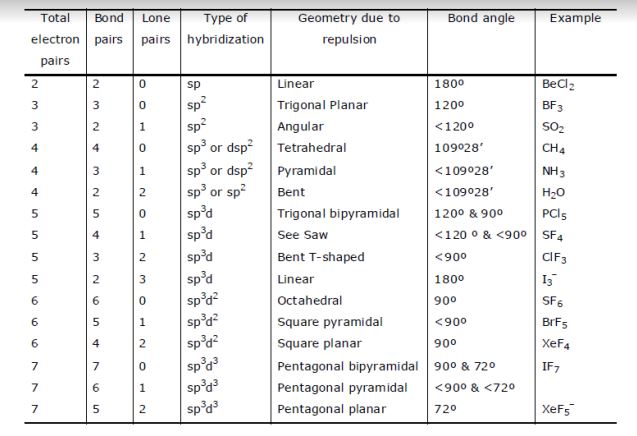 Hybridization is one of the fundamental concepts used to explain bond formation. Pauling introduced it.

For example, one 4s and one 4p can form two sp hybrid orbitals, but 1s and 5p cannot.

In the ground state, Se has 2 unpaired electrons. It can only form two bonds.

These 6 electrons are present in different orbitals. All the 6 orbitals undergo hybridization to form sp3d2 hybrid orbitals. 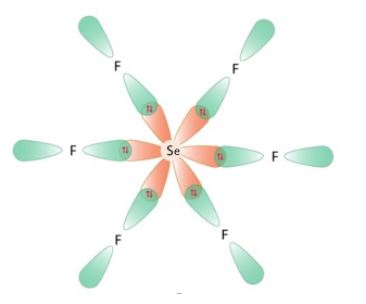 The trick for calculating the type of hybridization of SeF6

In VSEPR theory, we calculated the total electron pairs in the last step.

The table below can predict hybridization using total electron pairs or steric numbers.

Hybridization comes out to be sp3d2 from the table. 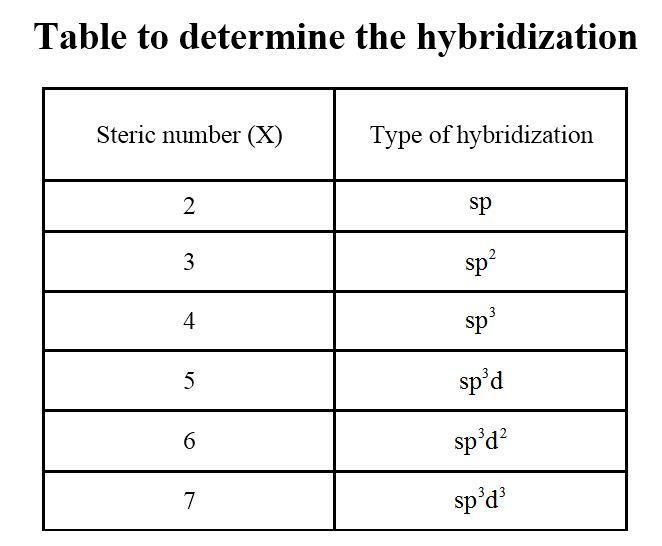 The net dipole moment depends on

In SeF6, only one type of bond is present ie; Se-F bond. The electronegativity of Se and F is 2.55 and 3.98, respectively. The difference comes out to be 1.43. The bonds are polar, and the bond dipole moment is non-zero.

Polar bonds do not guarantee a polar compound. Dipole moment is a vector quantity. A symmetrical shape results in the cancellation of the dipole moment. 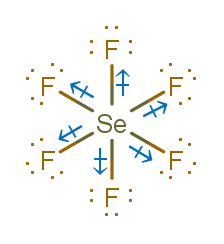 The shape of SeF6 is octahedral. All the dipole moments are canceled, resulting in zero net dipole moment. Thus, the compound is non-polar.

Check out the article on SeF4 Polarity.

SeF6 is a hypervalent compound.

The Lewis structure drawn in the above section is the most stable.

The shape and geometry for selenium hexafluoride are octahedral.

Hybridization of SeF6 is sp3d2.

It is a non-polar compound.