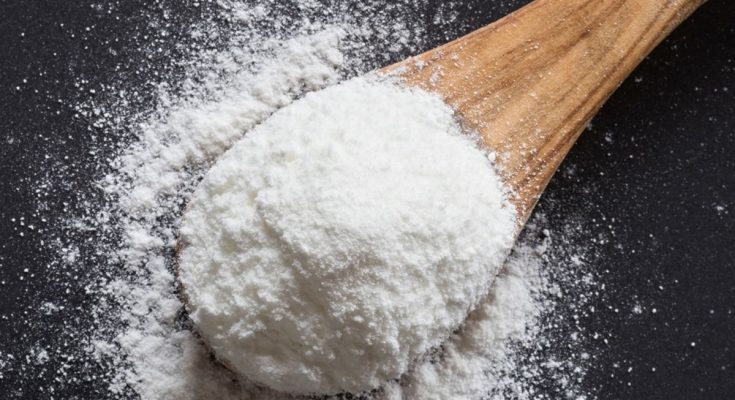 Sodium hydrogen carbonate or Baking soda is also known as bicarbonate of soda or sodium bicarbonate. It is a white crystalline substance that is salty and alkaline in taste.

In nature, it occurs as a mineral called nahcolite and is usually found in the water of springs.

Synthetically it is manufactured by reacting ammonia and carbon dioxide with cold and concentrated sodium chloride.

NaHCO3 is the chemical formula for baking soda. It is composed of two types of ions viz. Sodium ions (Na+) and bicarbonate ions (HCO3-).

Is Baking Soda Acidic or Basic? 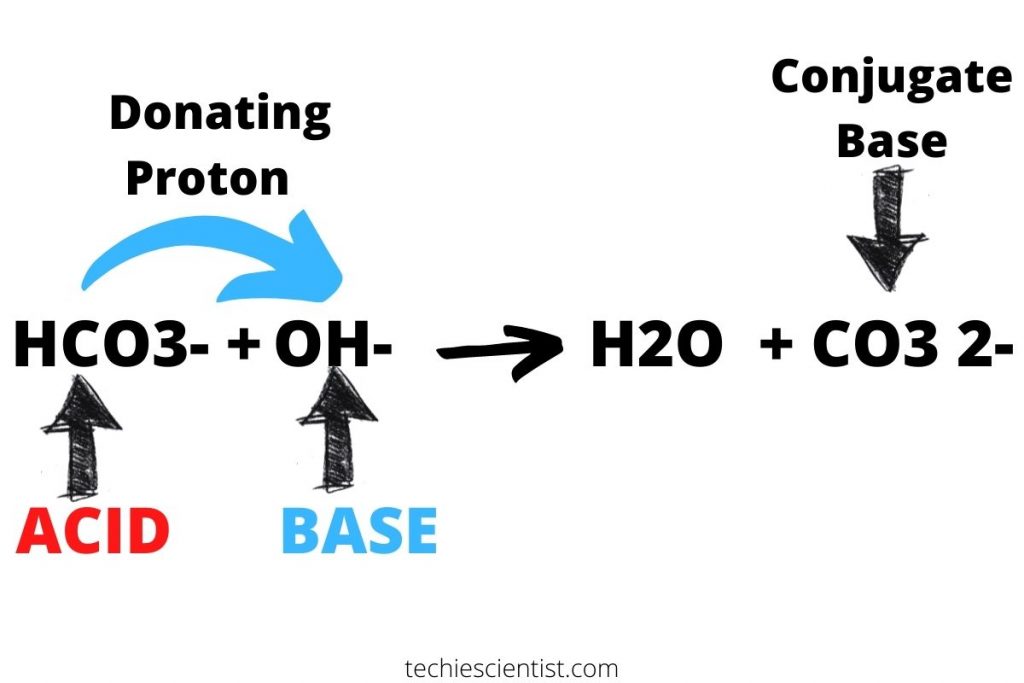 The aqueous solution of Sodium Bicarbonate is alkaline.

The reason for this is that the sodium bicarbonate molecules when dissolved in an aqueous solution break down into sodium (Na+) and bicarbonate (HCO3-) ions. The sodium ions do not dissociate further.

On the other hand, the bicarbonate ions further react with water molecules and form hydroxide ions and carbonic acid.

This two-step reaction can be written as:

The hydroxide ions present in the solution make it alkaline.

Moreover, it can also be seen that the bicarbonate ion accepts a proton to form carbonic acid. This is also a property of a base.

Therefore, the aqueous solution of NaHCO3 is alkaline.

The pH of the solution lies between 8 and 9 and the Ka is value is 4.8 X 10-11 further indicating that it is alkaline in nature.

Why is Baking Soda Alkaline? 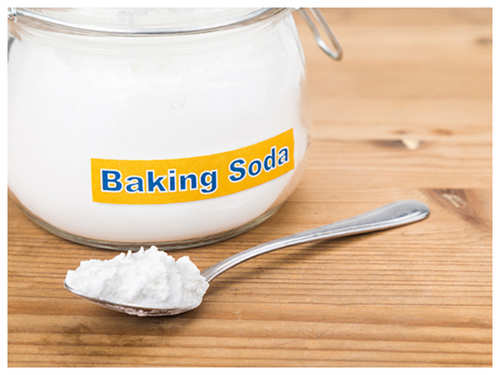 The properties of a substance are derived from its elemental components. In the case of NaHCO3, we know that one mole of baking soda is produced when one mole of Sodium hydroxide (NaOH) reacts with one mole of carbonic acid (H2CO3).

Therefore, we can say that it is the salt of a weak acid and a strong base.

In order to understand which salts would act as basic and which as acidic the following rules are prescribed:

Salts of strong acid and strong base are neutral i.e. having pH = 7

Salts of strong acid and weak base are acidic i.e. having pH < 7

Salts of the weak acid and strong base are alkaline i.e. having pH > 7

As discussed before NaHCO3 is the salt of sodium hydroxide and carbonic acid which are strong base and weak acid, respectively. This makes NaHCO3 alkaline having a pH value of more than 7.

Why does the aqueous solution of NaHCO3 become basic?

The sodium bicarbonate molecules when dissolved in water reacts with the neutral molecule of water and dissociate to form sodium (Na+) and bicarbonate (HCO3-) ions as per the following reaction:

The sodium ions (Na+) here act as the weak conjugate acid of a strong base i.e. NaOH and therefore, do not react further.

However, the bicarbonate ions (HCO3-) are the strong conjugate base of a weak acid i.e. H2CO3, and hence, react further to form (OH-) and carbonic acid (H2CO3).

According to the Arrhenius theory of acids and bases, the substances that donate hydroxide ions in a solution are called a base.

As discussed above the hydroxide ions (OH-) are released after the dissociation of bicarbonate ions and are responsible for the alkalinity of the solution.

Also, as per the Bronsted-Lowry theory of acids and bases, the substances that accept protons from another molecule are called bases.

In the above case, the bicarbonate ions (HCO3-) accept protons from water molecules for the formation of carbonic acid. 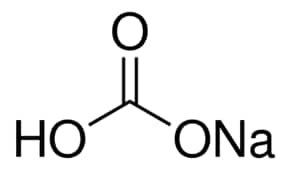 Amphoteric substances are those that can act both as an acid with a base and as a base with an acid.

Sodium bicarbonate (NaHCO3) is considered an amphoteric substance as it can react with water both as an acid, by donating a proton, and as a base, by accepting a proton.

The reaction equation for baking soda acts as a base is represented as:

The reaction characterizing baking soda as acid is written as follows:

The amphoteric nature of baking soda is made use of in enhancing its use as a laundry detergent and cleanser of fish tanks, swimming pools, etc where it acts by balancing the pH levels. 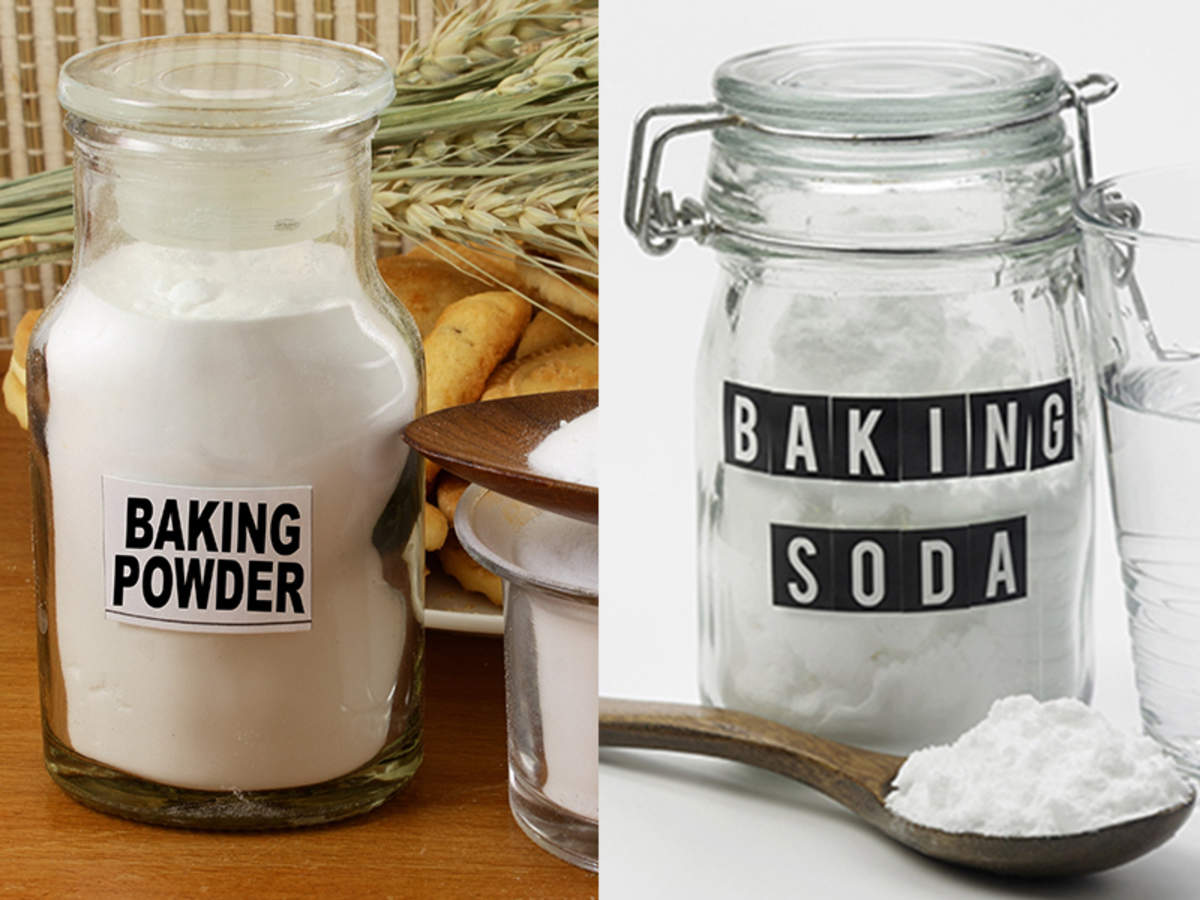 Both baking soda and baking powder occur as white powders and may easily be confused with each other. Also, they are both used as leavening agents in baking.

However, looking at the chemistry of these two compounds, they are found to be quite different.

Baking soda is a leavening agent that is basic and requires the presence of an acid as well as water for its reaction to start.

The CO2 released from this reaction helps the baked goods to rise.

Baking powder, on the other hand, is a complete leavening agent i.e. it is a combination of both an acid as well as a base (NaHCO3) that would react in the presence of water to make the baked product rise.

It also contains cornstarch that acts as a buffer to prevent the reaction of acid and base when kept in storage.

When mixed with wet dough the ingredients of baking powder get activated and results in the release of CO2 which makes the rising of the baked goods possible.

Is Baking Powder an Acid or Base?

Baking powder is the combination of baking soda that acts as a base, and a dry acid, like sodium aluminum sulfate or cream of tartar along with a buffer that helps in safe storage of this compound by preventing premature reaction before intended use.

Double-acting baking powder consists of two types of acids a monocalcium phosphate that reacts immediately as it comes in contact with water and the second one is sodium acid pyrophosphate or sodium aluminum sulfate which reacts at higher temperatures.

The basic ingredients of baking powder are sodium bicarbonate which is strongly alkaline and a mild acid. This makes baking powder slightly basic on the pH scale.

This can also be checked with the help of pH indicators where it turns red litmus paper to blue.

The pH of a substance determines its alkalinity or acidity.

The pH scale ranges from 1 to 14 where 7 is the indicator of a neutral solution that is neither acidic nor basic. It is the pH of water.

In the case of baking soda, we have already discussed its alkaline properties and know that it has a pH of more than 7.

Therefore, to avoid any misinformation we can say that the pH of NaHCO3 lies between 8 and 9.

Baking soda is a non-flammable powdery substance that has a monoclinic crystalline structure. It is a mild non-corrosive base and the powder dust is not explosive.

Various properties of baking soda are listed in the table below:

• Baking soda finds its use in various spheres of life where it is used for a variety of purposes. A few important uses of sodium bicarbonate are listed below:

• It is used in the baking process as a leavening agent.

• It is used as a pesticide for killing cockroaches and reducing fungal growth.

• It is used as a disinfectant especially in swimming pools.

• It is used as a whitening agent in laundry detergents

• It is used as an antacid

• It is used as a kitchen cleaner owing to its antibacterial properties.

• It is used as an odor eliminator from garbage, refrigerator, etc.

• It is used as a deodorizer.

• It is used as a tooth and mouth cleaner.

• It is used as a silverware polisher.

• It is used as a fire extinguisher.

• It is used in personal care products and cosmetics.

• Sodium bicarbonate acts as a base by accepting a proton in the aqueous solution.

• Baking soda is an amphoteric substance that may act as an acid or as a base.

• Baking powder is composed of NaHCO3 and a dry acid. It is slightly alkaline.