PBr5 or Phosphorous Pentabromide is a compound that consists of 5 molecules of Bromine and 1 molecule of Phosphorus. It appears to be a yellow crystalline solid. The structure of PBr5 in the solid-state is PBr4+ Br− whereas in the vapor phase it dissociates to become PBr3Br2.

In nature, the compound is corrosive and its molecular weight is 430.49 g/mol. Storage and shipment of this molecule are done in sealed containers as it is highly irritating to human skin and eyes.

Generally, PBr5 is used to make other chemicals and compounds.

How to draw Lewis Structure

Understanding the Lewis structure of any compound is essential to know more about its properties.

The Lewis structure is nothing but a representation of how the electrons participate in the bond formation to form the particular compound.

There are two types of electrons constituting the bond formation in any compound. These are bonding pair of electrons which take part in forming the bond. And other are non-bonding electrons or lone electrons that do not form any bonds.

A summation of these bonding and nonbonding electrons are known as Valence Electrons.

While drawing the structure, a single straight line represents the bonds and dots represent the lone electrons. In a Lewis structure, the octet rule is followed which means any molecule is stable when it has 8 electrons in its outer shell.

Now let us see how to draw the Lewis structure of PBr5.

Below is the explanation of how the Lewis Structure of PBr5 is made.

In every molecule, there is one central atom from which other atoms are bonded to.

Here, Phosphorous is the central atom. With this atom, a single bond is made with the neighboring Bromine atoms, which means 2 electrons are shared between these atoms.

The remaining electrons in the atoms are considered as lone pairs which are represented by 2 dots.

Foremost, you need to sum up all the electrons of these atoms.
Here,

The Valency of the Br atom is 5.

Here in this structure, the central atom is Phosphorus which bonds with the other 5 molecules of Bromine.

Take a look at the diagram below to understand all these theories pictorially. 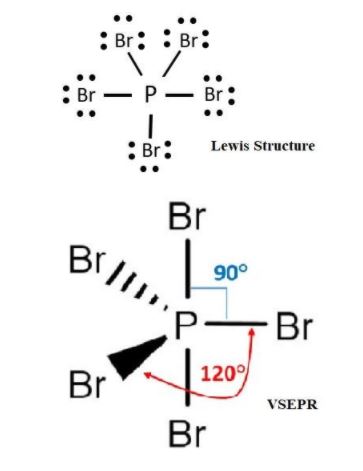 After seeing the Lewis structure of PBr5, let us jump into the hybridization of this compound.

Before moving into the hybridization of PBr5, do you know what hybridization in general is? Well, if no, read the below statement for a clear understanding.

“When the atomic orbitals fuse to make or form new hybridized orbitals then it is called hybridization. During this process, the molecular geometry and bonding properties are altered. Always remember that the mixing takes place only between orbitals which are at same energy levels.”

To calculate hybridization a simple formula is used:

When calculating the hybridization of PBr5, we can substitute values in the above equation to get the desired results.

The next 3 valence electrons can be habituated in Px, Py, and Pz orbitals.

This leaves us with only 1 valence electron. It thus goes in the dx orbital.

Thus, the hybridization of PBr5 is sp3d.

Apart from this, you can take reference from the below diagram to understand how sp3d hybridization is achieved. 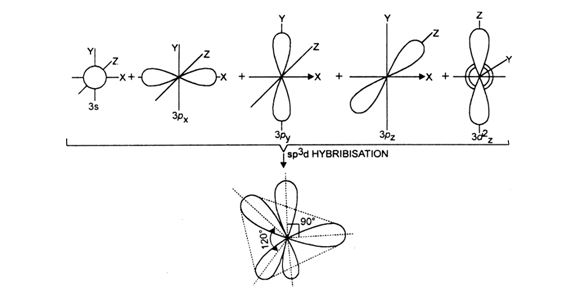 With the help of a pictorial representation, you can understand the orbitals in a better and clear way.

In the above diagram, you can see some angles forming. These are known as bond angles. You can find bond angles quite easily.

As you can see there are in total five pairs of bonded electrons.

The angle between the axial and equatorial lines is 90 degrees.

And the angle between the three pairs of bonded electrons is 120 degrees.

Next is the molecular geometry of PBr5. Let’s take a look at it together.

In general, the Lewis structure of a compound can explain its molecular geometry easily.

However, in the case of PBr5, the molecular geometry can be explained better with the help of VESPER theory.
VESPER theory in general stands for Valence Shell Electron Pair Repulsion theory.

In VESPER theory the steric number and coordination number of the atoms are taken into account to find the geometry of the compound.

Let us first understand what is the meaning of steric number and coordination number.

The number of ions, atoms, or molecules bonded to a central atom in any molecule or crystal is known as the coordination number.

In the case of PBr5, the central atom P is bonded with 5 Br atoms thus the coordination number is 5.

Due to this dispersion, PBr5 shows trigonal bipyramid geometry.

Below is the pictorial representation of the geometry of the PBr5 molecule. 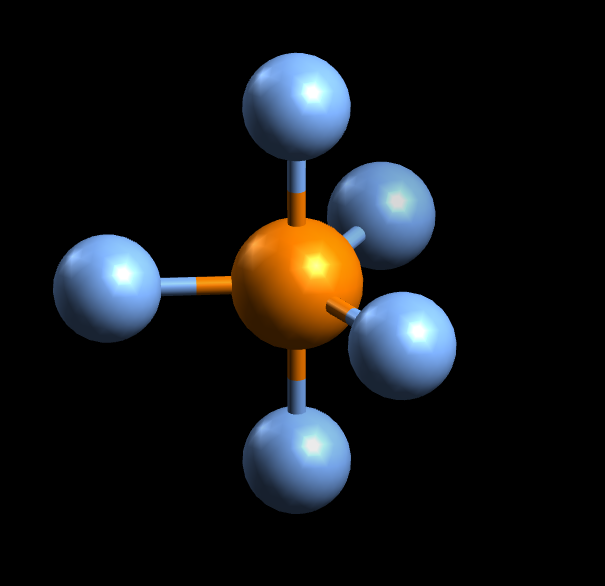 Now comes the question that what is the polarity of PBr5?

PBr5 is non-polar because of the arrangement of atoms of this compound. The valence pairs are arranged symmetrically in Pbr5.

When the bonds are arranged symmetrically the dipole moment is 0, making the compound non-polar.

Now when we know the basic things about PBr5, let us take a look at what is a Lewis structure and how to draw it for the PBr5 compound.

Here are some of the useful applications of PBr5 that you should know about:

To conclude our learning of PBr5 let us recall all that we have read about this compound. PBr5 has 40 valence electrons.

With sp3d hybridization, PBr5 has trigonal bipyramidal geometry according to the VESPER theory. The molecule is nonpolar due to the symmetric arrangement between bonded and lone pair of electrons.

We hope this article was insightful enough and you understood the basic structure and geometry of PBr5. In case of any doubts regarding this topic, please feel free to reach out to our team for clarifications.