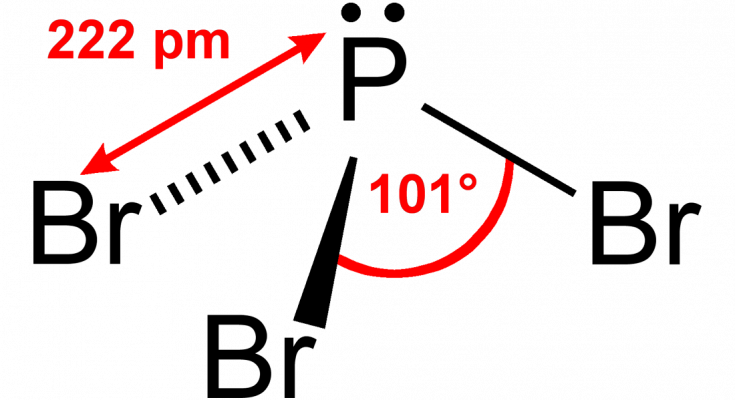 PBr3 or Phosphorus tribromide is seen as a colorless liquid that forms liquid fumes in soggy air because of hydrolysis and has a very pungent smell. It is utilized in the research facilities for the transformation of alcohols to alkyl bromides.

PBr3 is prepared by reacting red phosphorus with bromine which is often conducted in the presence of a diluent since it is a highly exothermic reaction.

The reaction is as follows:

The phosphorus is used in excess so that the formation of PBr5 will not occur.

Phosphorus tribromide can be used both as a Lewis base and Lewis acid making it quite useful for various reactions.

So, Is PBr3 polar or nonpolar? PBr3 (phosphorus tribromide) is a polar molecule because of its asymmetrical shape. The electronegativity of Br is 2.96 and that of P is 2.16. Hence the electronegativity difference is greater than 0.5 making the P-Br bonds polar. But due to its asymmetrical shape, it is considered a polar molecule.

The primary use of PBr3 as stated above is to form alkyl bromides from alcohols. It is also used as an intermediate in Hell-Volhard-Zelinsky halogenation.

PBr3 also acts as a catalyst for the alpha bromination of carboxylic acids. It is also highly soluble and thus undergoes rapid hydrolysis.

A powerful fire suppressant molecule, it also used in manufacturing many pharmaceuticals like fenoprofen, alprazolam, etc.

The boiling point of PBr3 is 173.2 degrees Celsius.

The melting point of PBr3 is -41.5 degrees Celsius.

Contents show
Concept of Polarity
Factors that help determine the polarity of a molecule
Why is PBr3 a Polar Molecule?
Conclusion

This means that the electrons are not shared equally between the atoms and the electrons tend to hang around the more electronegative element.

For example in HF, F is highly electronegative and thus pulls electrons towards itself making F acquire a partially negative charge and H gets a partial positive charge, thus making the bond polar.

Non-polar molecules can be defined as those molecules that have an equal number of shared electrons between them.

There is no electronegativity difference and their net dipole moment comes out to be zero. Some examples include:

Atoms which are bonded to themselves like H2, F2, Cl2 are non-polar. Hydrocarbons i.e molecules having a C-H bond like CH4 are also non-polar. Check out the reason for the non-polarity of CH4.

Now that we have gone through the basics of what polarity is, we need to expand our learning to more complex molecules. And that is where geometry and net dipole moment comes in handy.

When the net dipole moment is zero, it is said to be a non-polar molecule.

The steps to determine the polarity of molecules is as follows:

By following these simple steps you will be able to determine the polarity of any molecule.

Factors that help determine the polarity of a molecule

There are mainly 3 factors that help determine the polarity. These are as follows:

Dipole Moment– Dipole moment is used to measuring the polarity of a chemical bond. It occurs when the charges are separated from each other.

The bond dipole is given by multiplying the charge on the molecule and the distance between the partial negative and positive charges. It is measured in Debye which is denoted by D. 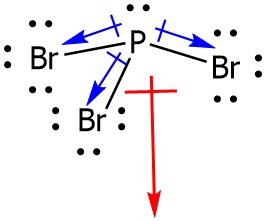 After finding out AXN, we check the VSEPR chart to find its molecular shape. If the shape is symmetrical (the dipole moments cancel each other) it is a non-polar molecule.

If the shape is asymmetrical (irregular) the net dipole moment is never zero and it is a polar molecule.

Given below is the image of the molecular shape of PBr3. 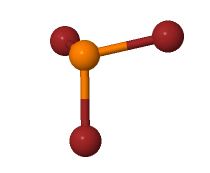 Why is PBr3 a Polar Molecule?

To answer this, we will first take a look at its Lewis structure and then move on to its molecular geometry.

To determine the Lewis structure of PBr3, we first count the total number of valence electrons of each element.
P (group 5) has 5 valence electrons and is the central atom (since all other atoms are bonded to it).

Arrange all the 26 valence electrons around the molecule so that each atom completes its octet.

After placing all electrons we notice that there are two electrons still left. These last two valence electrons act as a lone pair (hence changing the structure and bond angle) on P and we see that each atom has completed its octet. Thus we get the Lewis structure of PBr3.

From here we see that, since Br is the more electronegative atom the electrons tend to spend more time around that atom thus making the P- Br bond polar.

So far, only the P-Br bond is polar, now we have to see whether the whole molecule is polar or not. That is where molecular geometry comes in.

Molecule geometry plays a big role in determining single bond dipole moments. From VSEPR theory, we can easily see that PBr3 has a molecular shape of trigonal pyramidal with bond angles close to 109 degrees.

From the above structure, we observe that PBr3 has an asymmetrical structure, meaning that their net dipole moment is not zero (dipole moments do not cancel each other out) this rendering the molecule a polar compound.

So to sum up the article, we found that PBr3 is a polar molecule because it has an asymmetrical shape and the dipole moments do not cancel each other out thus making their net dipole moment non zero.

PBr3 has its uses in the Pharmaceutical sector, as a fire suppressant and for converting alcohols to alkyl bromides. Its molar mass is 270.69 g/mol.

It has a very potent odor and can induce toxic compounds like phosphine and HBr3 in some reactions, hence should be used cautiously.