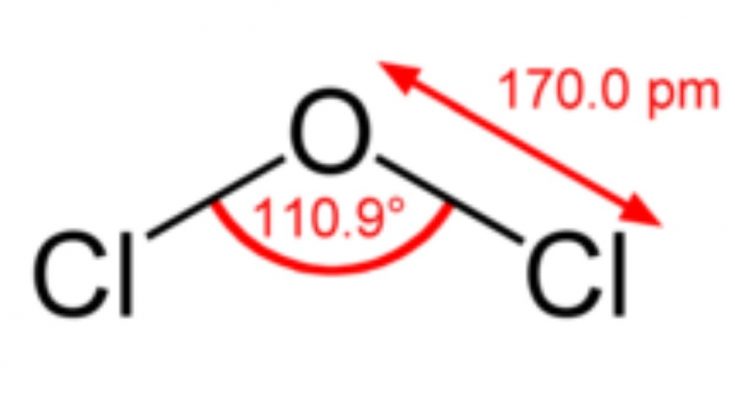 Moreover, being an anhydride of hypochlorous acid, dichlorine monoxide is a strong oxidizer as well as a chlorinating agent.

There are different methods of preparing this compound where a few of the reactions are mentioned down below:

Preparing dichlorine monoxide with mercury is an older approach where it is not used preferred for commercial purposes as it is expensive and possesses a higher danger of exposure to mercury poisoning.

In addition to this, dichlorine monoxide is considered a major explosive as room temperature mixtures in the presence of oxygen can only be exploded with the help of an electric spark until there exist a minimum of 23.5% of OCl2.

The electrons present in the outermost shells are called valence electrons as they readily participate in the bond formation to form a new molecule.

The valence electrons only participate in the bond formation because they are the farthest from the nucleus of the atom due to which they do not get easily influenced by its force of attraction.

Moreover, as per the octet rule, an atom can have a maximum of 8 valence electrons in the outermost shell where they need only these many to stabilize their octet. The 8 is a decided number as every atom wants to attain the electronic configuration of the noble gases.

Whereas, many groups within the periodic table do not follow this rule as the outermost shell can stretch itself to accommodate more valence electrons.

Lewis dot structure is a sketchy diagrammatical method of determining how bond formation is occurring within the participating atoms.

The structure determines how sharing of the valence electrons is taking place and whether a single, double or triple bond is forming. With this information, molecular geometry, hybridization, and molecular orbital diagram can be studied further.

The atomic number of the oxygen is 8 where its electronic configuration is 1s2 2s2 2p4. To achieve a stable state, the p shell needs to accommodate 6 electrons so there is a scarcity of two electrons which makes valence electrons for oxygen 6.

On the other hand, in the case of chlorine, its atomic number is 17 where the electronic configuration is 1s2 2s2 2p6 3s2 3p5. As the p shell needs 6 electrons in total, there is a scarcity of one electron making the total number of valence electrons for chlorine 7. 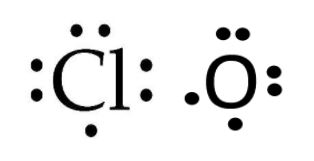 Now, to begin drawing the Lewis structure of dichlorine monoxide (OCl2), we need to follow a step by step approach:

Step 1: How many total valence electrons already available for one OCl2 molecule? It is 20 as 6 are coming from the oxygen atom and 7 are coming from each chlorine molecule.

Step 3: Which atom can be the central atom in one OCl2 molecule? It will be oxygen as it is present as a single entity where chlorine has two atoms.

Step 4: What type of bond formation taking place within one OCl2 molecule? A single covalent bond is forming between the participating atoms.

Step 5: Now draw the structure by assembling all the aforementioned points:

Molecular geometry is a 3D arrangement of the participating atoms within a molecule that helps with studying bond length, bond angles, and other geometrical parameters associated with the atoms of a molecule.

Through the molecular geometry diagram, one can study hybridization, polarity, and molecular orbital structure of the molecule determining the behavior of the valence electrons undergoing bond formation.

The bond angle between oxygen and chlorine atoms (O-Cl) is 110.9° which gives the molecule a bent or V-shaped.

This can be studied with the help of the Valence Shell Electron Pair Repulsion theory which says the oxygen atom has more electronegativity than chlorine due to which the shared electrons are closer to the oxygen atom.

Moreover, these electrons are closer to each other as well which generates repulsion as a result of increasing the angle. Besides this, the chlorine atom is larger in size than the oxygen atom and consists of 3 lone pairs of electrons.

These electrons exert repulsive forces to the lone pairs of all the chlorine atoms which increases the bond angle. It might be of interest that the ideal molecule shape for AX2 structure is linear where V shape is for compounds having AX2E2 general formula.

Hybridization is a mathematical process by which atomic orbitals of the same atom are combined to produce totally new orbitals made up of different components altogether but having similar energy as that of the older atomic orbitals.

Here, it is important to understand that the older and newer atomic orbitals are having similar energy but not equivalent, by any chance.

For OCl2, the central atom, that is, oxygen is sp3 hybridized as it forms two bonds with the chlorine atoms and consists of two lone pairs of electrons. So, in total four hybrid orbitals are required which are formed by mixing of one s orbital and three p orbitals.

Hence, the four newly formed hybrid orbitals have 25% s and 75% p characteristics. The hybridization of OCl2 can be studied in detail with the help of Valence Bond Theory (VBT) which says as the s orbital is nearer to the nucleus than the p orbital and is lower in the energy, the electrons of sp3 hybridized molecules are quite far from the nucleus.

We know, the electrons will be more stable if they are closer to the nucleus, so in case of having a negative charge, sp3 hybrid molecules are less stable in general.

Here, it is important to understand that sp3 hybridized orbitals usually produce a tetrahedron shape with a bond angle of almost 109°.

Dichlorine monoxide (OCl2) is one exception where its molecular geometry is bent shaped and the bond angle is 110.9° which is mainly due to the presence of two lone pairs of electrons that exerts repulsion changing the complete structure of the OCl2 molecule.

In chemistry, polarity leads to the separation of charges creating a net dipole moment on the overall molecule having one a negatively charged end and another positively charged one.

This property is shown mostly by the covalent molecules where electrons are shared between the participating molecules not donated by any chance.

In the case of dichlorine monoxide (OCl2), it is a polar molecule as the oxygen and chlorine bond (O-Cl) do not cancel the dipole moment of one another leaving a dipole cloud behind. The electronegativity values for oxygen and chlorine are 3.44 and 3.16 where their difference is 0.28.

As this value is not zero, there exists a net dipole moment which makes the dichlorine monoxide a polar molecule. It might interest you that the lower the difference between the participating electronegativity values, the lower will be the intensity of polarity behavior and vice versa. 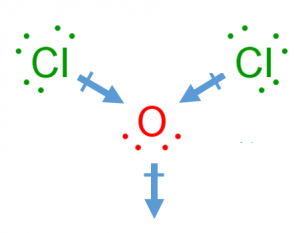 Dichlorine monoxide (OCl2) is an inorganic compound that can be prepared in many different ways but the most preferred ones are using Sodium as one major constituent.

From the Lewis structure of OCl2, it is clear that the oxygen molecule has two lone pairs of electrons which change the molecular geometry of the molecule from linear to bent or V-shaped.

Moreover, the hybridization of OCl2 is sp3 which means there exist four hybrid orbitals of similar energy that stabilizes the overall structure of the molecule. In the case of polarity, the OCl2 is a polar one as there exists a net dipole moment but quite weak in intensity.