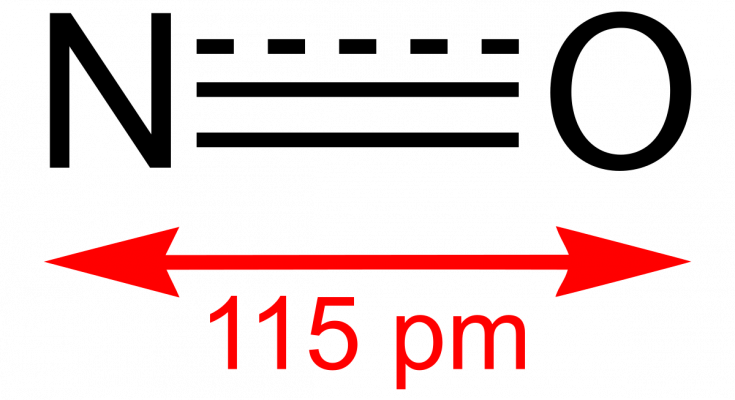 Have you ever heard about acid rain? The rainwater is so unusually acidic that it can cause toxicity and poses to be really harmful to life on earth.

One of the main reasons lies in the emission of nitrogen oxides- NO or nitric oxide.

Not only a major participant in acid rain deposition, but NO can also cause ozone layer depletion and badly affect the human respiratory system in general.

Being such a hazardous chemical compound, we can usually find nitric oxide in a colorless gaseous state.

Produced in laboratories via ammonia oxidation or nitric acid reduction, this is also formed naturally during lightning and thunderstorms.

If you are wondering whether nitric oxide has only harmful effects, be ready to be surprised. NO is known to transmit chemical signals in several biological processes, especially the cardiovascular region. Not only this, it aids in relaxing muscles and increasing blood flow in the human body.

So, let us learn about this molecule in a detailed format to have an elaborate comprehension of the internal bonding nature and several other characteristics.

Why is chemical bonding such an essential chapter in order to understand any molecular composition as a whole?

This is because bonding is the reason behind the formation of any compound or molecule. Atoms of different nature combine together in different ratios to form different compounds and this combination leads to the rise of several properties that the resultant molecule exhibits.

The strength of the bonds and the reactivity of the molecules result in a wide varied range of properties – be it hardness, boiling point, or conductivity.

Therefore, understanding how a molecule is formed, the types of bonds that are exhibited, and in what state the molecules are positioned, is important for a thorough description of any given molecule, in this case, we will talk about NO or nitric oxide.

The first and foremost step towards understanding chemical bonds inside a molecule is to draw the Lewis Structure.

Lewis Structure is quite a simple yet interesting concept we will come across in chemistry.

Take your molecule of choice and imagine the outermost shell of each constituent atom. You, as I expect, are already familiar with valence shell and valence electrons, right?

Now imagine those valence shell electrons to be like small black dots encircling each atom. This is known as electron dot structure, another name for Lewis Structure.

Step 1. Take your NO molecule. As we can see. NO, or nitric oxide has two atoms: one N atom, and one O atom.

Step 4. Octet rule: The octet rule signifies the behavior of atoms to have eight electrons( for hydrogen, two) in their outermost shells so that they can attain the noble gas configurations in the periodic table. Here, oxygen has attained a valency of eight but the nitrogen hasn’t yet.

Step 5. Here, we have formed this single bond between oxygen and nitrogen but this is not the most suitable form. For N to have a near noble gas configuration, we will push towards the double bond formation.

By shifting the electron dots from the lateral side towards the center shared by nitrogen and oxygen, we now get nitrogen valency to be 7.

Step 6. To confirm, whether the above-mentioned Lewis structure sketch is the most suitable formation for NO, there is one more thing we need to check.

Formal Charge: Since we do sometimes come across more than one LS for the same molecule, it can turn out to be quite confusing.

In order to maintain uniqueness, all we have to do is calculate the formal charge to see whether all the atoms inside a molecular compound are in their least possible formal charge values.

The formal charge formula is given by:

Therefore, since they are in their least possible formal charge values, we can conclude that the appropriate LS for NO is: 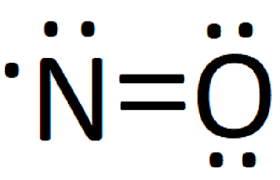 Nitrogen forms several oxides, each combination with different ratios of oxygen atoms. This leads to oxide, dioxide, trioxide, and so on.

With each different oxygen-nitrogen ratio combination, the shape also varies.

This is because the nature of chemical bonding between atoms determines the molecular shape of a molecule. 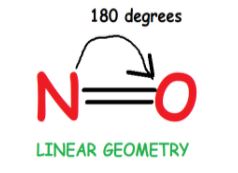 Let us delve a little deeper.

Remember how we used to say that like charges repel each other?

Well, they really do and electrons are no exception to this.

When atoms combine to form molecules, every constituent atom already has a number of electrons surrounding it. So, all these negative charges together point towards the sole fact that they are going to repel each other based on their like nature.

This means that when an atom comes closer to another atom to combine and become a molecule, the electron cloud surrounding each one will repel the other one. This concept has a name to it: Valence Shell Electron Pair Repulsion model theory or VSEPR theory.

Now, if we come back to our molecule NO, do you notice one thing that this molecule has only two atoms in it.

It does not matter whether there are single or multiple bonds between nitrogen and oxygen: what matters is that there are only two atoms with clouds of electron density around them repelling each other.

This will lead a diatomic molecule to form a linear structure, farthest from each other to minimize the repulsion effects.

The bond angle will therefore be 180 degrees.

Hybridization and Molecular Orbital theory are two concepts that quite overlap each other. And, we need to learn both in an extensive format to grasp the reality of bonding nature inside any molecule.

Here, in the latter, we basically use quantum mechanics to approximate the bonded electron states.

Coming back to NO, we are going to describe its bonding nature in a broad manner here.

NO is a diatomic molecule having unpaired electrons.

Do you know the bond length of a typical NO molecule?

Well, it is equal to 1.15 Angstroms, the value of which is in between that of a double and triple bond.

Now, when we consider the double bond, as we checked in the lewis structure sketch, we found out that nitrogen doesn’t really fulfill its octet and sticks to seven valence electrons.

This leads to sp2 hybridization since we are considering the oxygen atom completing the octet rule.

This is not the ultimate solution, since there are debates regarding the hybridization value which is considered to be sometimes sp2 and in other times, sp.

In MO theory, we will come across certain terms called

Nitric oxide is a polar molecule, having a net dipole moment. Owing to the presence of an unpaired electron, it acts as a free radical and is reactive in nature.

The electronic configuration of Oxygen is 1s2 2s2 2p4.

The electronic configuration of Nitrogen is 1s2 2s2 2p3.

We will work with 𝝈 and 𝝅 here, so before we go direct, here’s just a quick view:

As we can see in the diagram, we have higher electron density at the non-bonding 𝝈2, anti-bonding 𝝈1*, and 𝝅* in Nitrogen.

Therefore, the oxygen end is found to be less reactive than the nitrogen end in NO.

As we discussed before, NO is polar. This is because the non-bonding orbitals give rise to partial + and – charges on O and N sides. 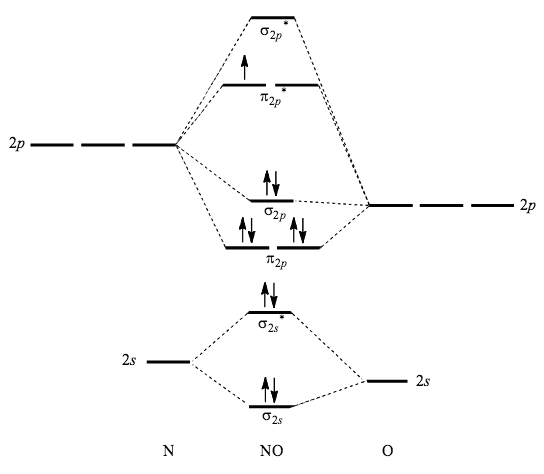 An elaborate explanation has been given about nitric oxide and its bonding nature.

We have drawn the most suitable Lewis Structure and found out the Molecular geometry i.e. the three-dimensional shape of NO.

After that, we have talked about the polar nature, hybridization and discussed the MO diagram of nitric oxide keeping in mind the different types of orbitals.

This article will help you have a summarized viewpoint about nitric oxide and its internal bonding state so that it becomes easy for you to comprehend the various features and reactions that NO exhibits.

Well, that’s for today. If you have any doubt feel free to ask.

Till then, keep enjoying and learning chemistry!