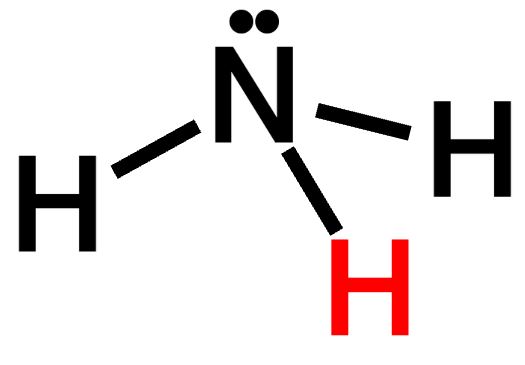 Ammonia is the simplest binary hydride made up of nitrogen and hydrogen denoted by its chemical formulae as NH3. It is a stable pnictogen hydride where all the atoms are covalently bonded to achieve a reactive state. Ammonia is lighter than the air, colorless, and pungent in smell.

It is a common nitrogenous waste of aquatic animals and an essential composition of the nutritional needs of terrestrial animals. In addition to this, ammonia is considered corrosive as well as hazardous if stored in significantly larger quantities.

The lewis structure that is also called an electron dot structure, is mainly a pictorial representation of the valence electrons present in an atom.

The diagram is drawn using dots around the symbol of an atom, mostly in pairs. Moreover, the lines show bond formation between the atoms where the number of lines determines whether a single, double, or triple bond has been formed.

Besides this, the lewis structure can also be used to determine the presence of a lone pair of electrons, which are not taking part in a bond formation. The electrons are filled around the symbol of an atom as per the octet rule.

The above image shows the lewis Structure of single nitrogen and a hydrogen atom.

The atomic number of the nitrogen is seven, which makes its electronic configuration 1s2 2s2 2p3. As the p shell needs to accommodate a maximum of six electrons, there is a scarcity of three electrons.

It makes a single nitrogen atom to have five valence electrons. Besides this, in the case of the hydrogen atom, its atomic number is one, where its electronic configuration is 1s1.

As s shell needs to accommodate two electrons, there is a scarcity of one electron. As a result, the hydrogen atom tends to have one valence electron.

As each atom, wants to achieve a stable condition by completing its octet, the valence electrons predominantly act in such a manner.

Moreover, as we know the hold of the nucleus of the atom is weakest on the outermost shell because it is farthest at distance, the valence electrons react to the presence of nearby valence electrons.

As per the octet rule, the maximum number of valence electrons that can be drawn around the symbol of an atom is eight.

The Lewis structure of nitrogen and hydrogen atom shows a total of eight valence electrons participating in a bond formation, to produce a single tetra-atomic NH3 molecule.

Here, we need to study how the Lewis structure of the NH3 molecule is drawn: 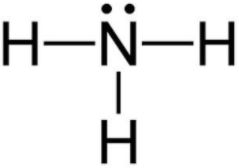 Geometrical Structure of the Ammonia (NH3)

The bond angle among the hydrogen-nitrogen-hydrogen atoms (H-N-H) is 107°. It is clear to understand that the geometrical structure of NH3 will be bent.

It is explained with the help of the Valence Shell Electron Pair Repulsion (VSEPR) theory, which says the presence of a lone pair on the nitrogen atom makes the complete structure of NH3 bent giving a bond angle of 107°.

It might surprise you that the ideal bond angle for the bent geometrical diagram is 109.5°. 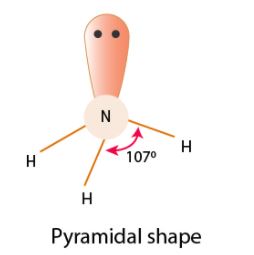 The molecular geometry of ammonia (NH3) is trigonal pyramidal or a distorted tetrahedral. It is because of the presence of a single lone pair of electrons on the nitrogen atom which is non-bonding in nature and exerts repulsion on the bonding orbitals.

If you notice, most of the non-bonding, lone pair of electrons are present on the apex.

Because of this, the pressure exerted due to repulsion by the lone pair of electrons affects the nitrogen-hydrogen atom (N-H) bond present on the opposite side.

Due to the original pyramidal shape of the Ammonia molecule, it is polar in nature as its atoms share unequal charges. Check out the valuable article already written on the polarity of ammonia.

The bond between each nitrogen and hydrogen atom is covalent and made up of sigma (σ) bonds only and no pi (π) bonds.

As we know, pi (π) bonds are present only in the double or triple bonds where ammonia (NH3) has single bonds only.

The sigma (σ) bonds are of the highest stability and are the strongest covalent bonds of all. Still, it is the presence of a single lone pair of electrons at the apex, which makes all the difference.

The hybridization of nitrogen in ammonia (NH3) is sp3. From the pictorial representation of hybridization in NH3, it can be seen that the nitrogen atom has one 2s and three 2p orbitals which combine and overlaps to produce four hybrid orbitals, which are of equal energy.

The three bonding and one non-bonding hybrid orbitals contribute to the sp3 hybridization of the ammonia (NH3). 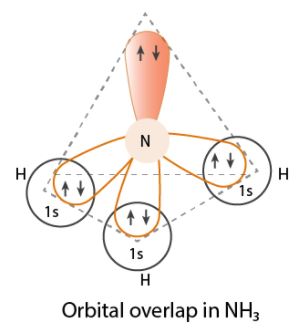 The diagram showing orbital overlapping in the ammonia (NH3) molecule

The molecular orbital diagram is a diagrammatic representation of how chemical bonding is taking place within the molecules.

In the case of ammonia (NH3), the molecular orbital diagram helps with understanding how sigma bonds are formed.

Moreover, it helps with figuring out how the lone pair of electrons affect the overall structure and energy distribution of the molecule.

Moreover, orbitals of the nitrogen having the same energy produce both bondings as well as anti-bonding interactions.

It is because p orbitals are more active while bond formation and are at higher energy than the s orbital. 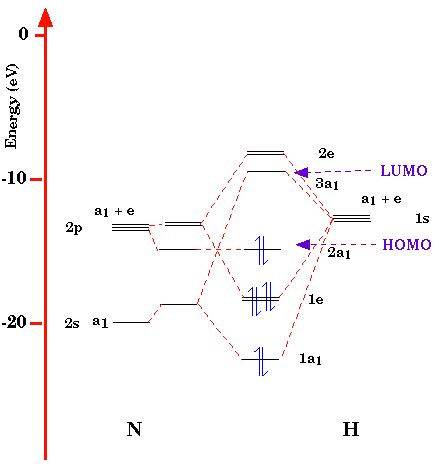 It is a reason why the bond angle is 107°, where it should have been 109.5°. Besides this, the hybridization of the ammonia (NH3) is sp3 because it has three p orbitals and one s orbital overlapping to produce four hybrid orbitals of similar energy.