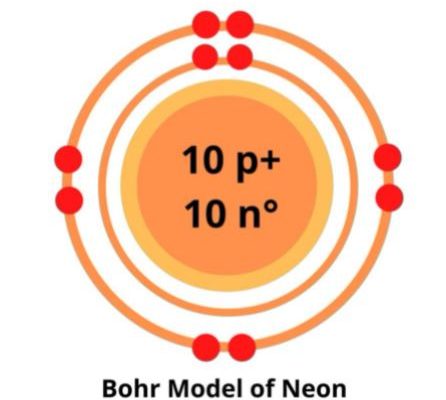 Neon is a noble gas denoted by the symbol Ne. It is a colorless, odorless, monatomic gas having atomic number 10. Neon exhibits a reddish-orange glow inside the vacuum discharge tubes. It was first isolated by Sir William Ramsay from a chilled sample of air.

However, it is rarely found on the earth’s surface. It is used in making advertisements or signboards that glow in the dark. It is also used for making lightning arresters, lasers, diving equipment, high-voltage indicators, etc. Liquid neon is also used in cryogenic preservation.

So, are you excited to learn about the Bohr model of Neon today???

Rutherford’s model of the atom was proposed in 1911. This model depicted the atomic structure well, describing the location as well as the number of atomic species correctly.

However, certain basic rules of classical mechanics and electromagnetic theory could not be answered using this model.

In 1913, the Rutherford model was again presented By Niel Bohr, however with certain important improvements. This was termed as Bohr-Rutherford model.

This model gave an explanation about the stability of electrons in their orbits and tried to overcome the drawbacks of the Rutherford model.

It also explained why electrons remain confined to their shells instead of falling inside the nucleus. The entire arrangement is exhibited in pictorial form for better understanding.

Before we start to explain the Bohr model of Neon, we must first understand a few terms related to the atomic structure.

• Nucleus: It is located at the center of an atom and is constituted of two types of particles viz. neutrons and protons. The nucleus in itself is a positively charged entity.

• Protons: These are the positively charged species that are present in the nucleus. These are represented by the symbol p+.

• Neutrons: These are the charge-neutral particles located inside the nucleus. These are represented using the symbol n°.

• Shells: The definite circular path followed by the electrons, inside an atom, around the nucleus. These are also known as orbits or energy levels. Each electron has its specific energy level and each energy level has a specific number of electrons.

The Bohr model names these shells as K, L, M, N, etc., or 1, 2, 3, 4, etc. The lowest value is assigned to the shell located closest to the nucleus while the shell farthest from the nucleus has the highest value.

This is also the measure of the energy of the electrons that are said to be in the ground state when present in the smallest shell.

The electrons located in the shell farthest from the nucleus have the highest energy and are known as valence electrons while the shell is known as the valence shell. The electrons present in this shell participate in the formation of bonds with other atoms.

The Bohr model also states that the electrons have the capability to fall from higher to lower, as they release energy, or to jump from lower to higher energy levels, as they absorb energy.

As we discuss the Bohr model of Neon, it contains 8 protons and 8 neutrons inside the nucleus, and 8 electrons revolving around the nucleus in 2 shells viz. K and L shells.

Neon is a noble gas that belongs to the 18th group of the periodic table: 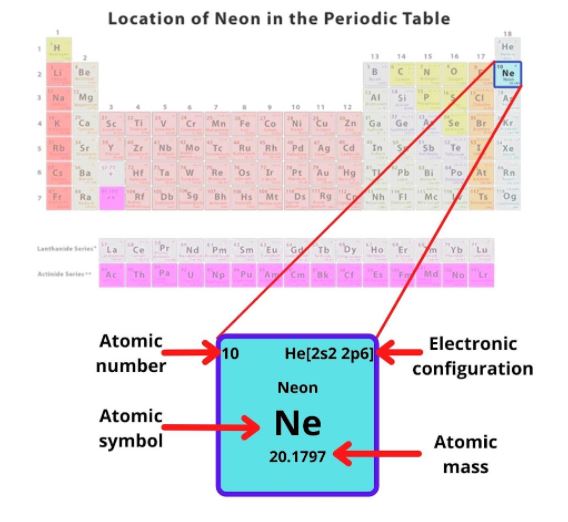 The information that we can derive from the above-mentioned Neon box is as follows:

• The electronic configuration of Neon is [He] 2s22p6.

• The chemical symbol of Neon is Ne.

Now, using the above information we will draw the Bohr atomic model for the Neon atom.

To draw the Bohr model we will first have to calculate the different atomic species present in the Neon atom.

Let us begin with calculating the number of protons.

As mentioned above, the atomic number of Neon is 10.

Therefore, for the Neon atom, the number of protons = atomic number = 10

Now, we will calculate the number of neutrons for the Neon atom.

The formula for calculating the number of neutrons in an atom is as follows:

Referring to the Neon box drawn above, we can see that the atomic mass of Neon is 20.1797. After rounding it up to the nearest whole number, we get 20.

Also, as calculated above, the number of protons in the Neon atom is 10.

Now, put these values in the above-given formula:

Hence, the number of neutrons in the Neon atom is 10.

We have already discussed above that the protons and neutrons together constitute the nucleus of an atom.

Hence, using the above-calculated values we can now draw the nucleus of the Neon atom. It is as follows: 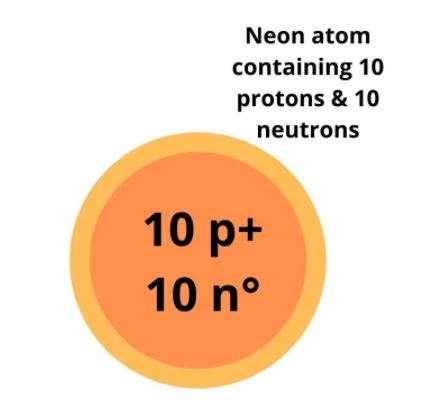 In this diagram, the p+ represents protons and n° represents neutrons.

Further, we will now calculate the number of electrons present in the Neon atom:

Therefore, in the case of Neon atoms,

Now, moving on we will add these electrons to the shells around the nucleus of the Neon atom.

For this, we will determine the number of shells present in the Neon atom, and also, the number of electrons that can be added to each shell.

The maximum number of electrons that can be housed in a particular shell is given by 2n2, where n refers to the number of shells.

Now, we will calculate the number of electrons for each shell of the Neon atom by applying the above-mentioned formula.

After adding these two electrons to the first shell the Neon atom appears as follows: 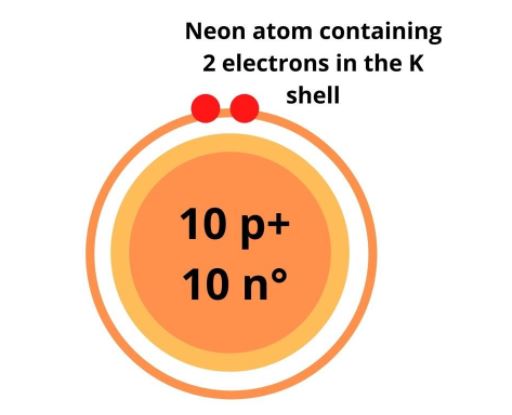 After this, we are left with eight more electrons.

To accommodate these we will calculate the number of electrons that can be housed in the L shell of the Neon atom.

Therefore, all of the 8 electrons can be housed in the L shell of the Neon atom.

Here, it is important to mention that from the L shell onwards the electrons in any shell are accommodated in the group of four which are arranged in a clockwise manner, at an angle of 90°.

As the number of electrons increases in a shell the angle between the electrons decreases. However, always the electrons will be added in a group of four.

Therefore, for the L shell of the Neon atom, the first four electrons will be added at an angle of 90°, in a clockwise manner. The Neon atom now appears like this: 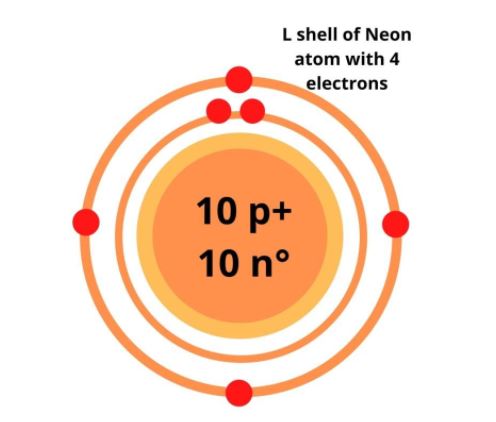 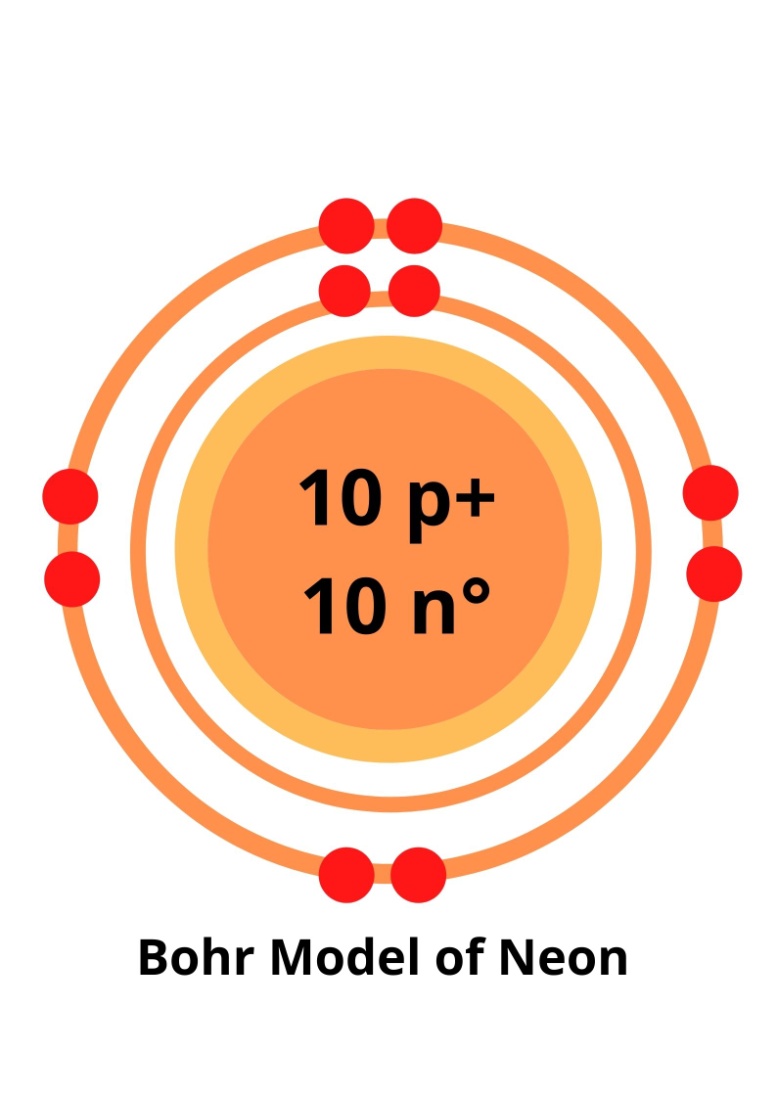 Hence, the final Bohr model of the Neon atom consists of 10 protons and 10 neutrons inside the nucleus, and 10 electrons revolving around the nucleus.

The Lewis structure of an element is the representation of its valence electrons around the atom, in a pictorial form.

Here, the dots represent the electrons while the atom is illustrated through its atomic symbol. This structure is also referred to as the Electron dot structure.

As discussed above, the Neon atom consists of 8 electrons in its valence shell i.e. L shell. Therefore, the Lewis structure of Neon is represented as follows: 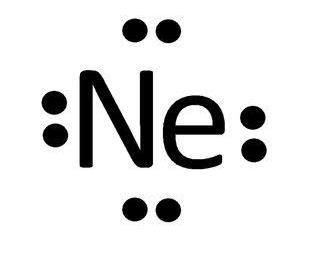 A few important properties of neon are listed below:

• The atoms of neon are arranged in a face-centered cubic crystal structure.

As per the Bohr model of the atom, the neon atom consists of 10 protons and 10 neutrons in the nucleus while 10 electrons revolve around the nucleus.

The neon atom consists of three shells viz. K and L shells have 2 and 8 electrons, respectively.