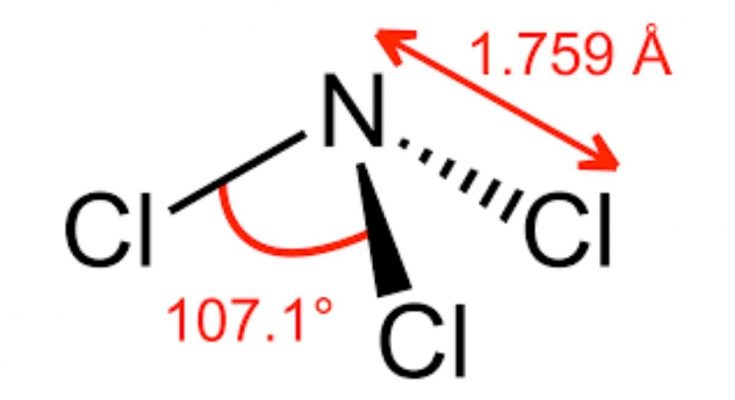 NCl3 is the chemical formula for Nitrogen trichloride. Also, called trichloramine it is a halogen nitride that is yellow and oily with a pungent smell. It is known as a strong explosive because being unstable in the pure form and sensitive to heat, shock, light, and any organic compound.

It explains the reason for the immobility of nitrogen trichloride and has to be prepared on the spot whenever required.

When Nitrogen trichloride reacts with water in the air, it produces nitrogen and chlorine gas. Both react with atmospheric gases to initiate recurring explosions that make it difficult to stop.

Some of the methods are discussed down below:

When chlorine reacts with an ammonium salt, it produces droplets of nitrogen trichloride.

The reaction between ammonia and Trichloroisocyanuric acid produces chloramines which when left aside forms trichloramine or nitrogen trichloride.

The Lewis structure is the foremost step to begin studying the physical and chemical properties of any molecule.

For nitrogen trichloride, it is essential to study the Lewis structures of the participating atoms before drawing the one for the molecule.

The atomic number of nitrogen and chlorine are 7 and 17. It makes their electronic configuration:

Now, let us learn the steps to draw the Lewis structure of nitrogen trichloride: 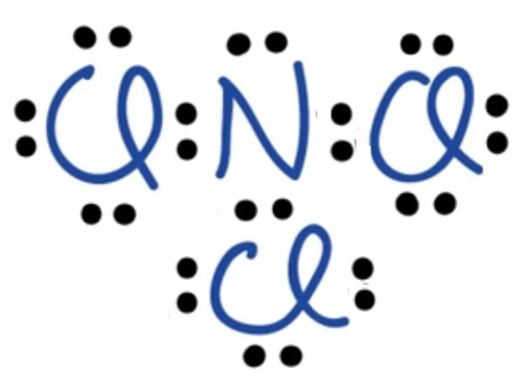 Step 2: Determine the number of valence electrons further required to complete the octets in one nitrogen trichloride molecule:

The atom present as a single entity is considered the central atom. Moreover, the element with the lowest electronegativity value becomes the central atom as it is required to make the maximum number of bonds.

Hence, nitrogen is the central atom.

Step 4: Draw the basic skeleton: Put nitrogen at the center and place chlorine atoms at three sides of nitrogen.

Now, put available valence electrons in pairs around each atom and rearrange their position to complete the octet of each atom.

Step 5: Determine the type of bond forming between the participating molecules:

It will be a single bond as each chlorine atom needs only one valence electron, and nitrogen needs three to complete their octets.

Step 6: The Lewis structure of nitrogen trichloride is drawn as below:

What are the Valence Electrons?

We know the structure of an atom is quite similar to our solar system as the nucleus is present at the center, and electrons orbit in their own shell around it.

The nucleus exerts a force of attraction that ensures each atom moves in its orbit. This pull becomes lesser for each shell and lowest for the outermost one. Due to this, electrons present in the outermost shell bear the least pull and readily participates in the formation of a bond.

These electrons present in the outermost shell are called valence electrons.

Here, it is crucial to know that the farthest two or three shells can also consist of valence electrons. The valence electrons always follow the octet rule by which their maximum number can be 8.

Nitrogen Trichloride is a tetratomic molecule as it has three chlorine atoms bonded with a single nitrogen atom having one lone pair of valence electrons.

It makes the molecular geometry of nitrogen trichloride trigonal pyramidal. It can be studied in detail with the help of the Valence Shell Electron Pair Repulsion (VSEPR) Theory.

It says the nitrogen trichloride has a steric number of 4 and consist of one lone pair of valence electron. Both conditions are suitable only for a trigonal pyramidal structure.

The steric number is calculated by adding the number of atoms bonded to the central atom and the number of lone pairs of electrons. 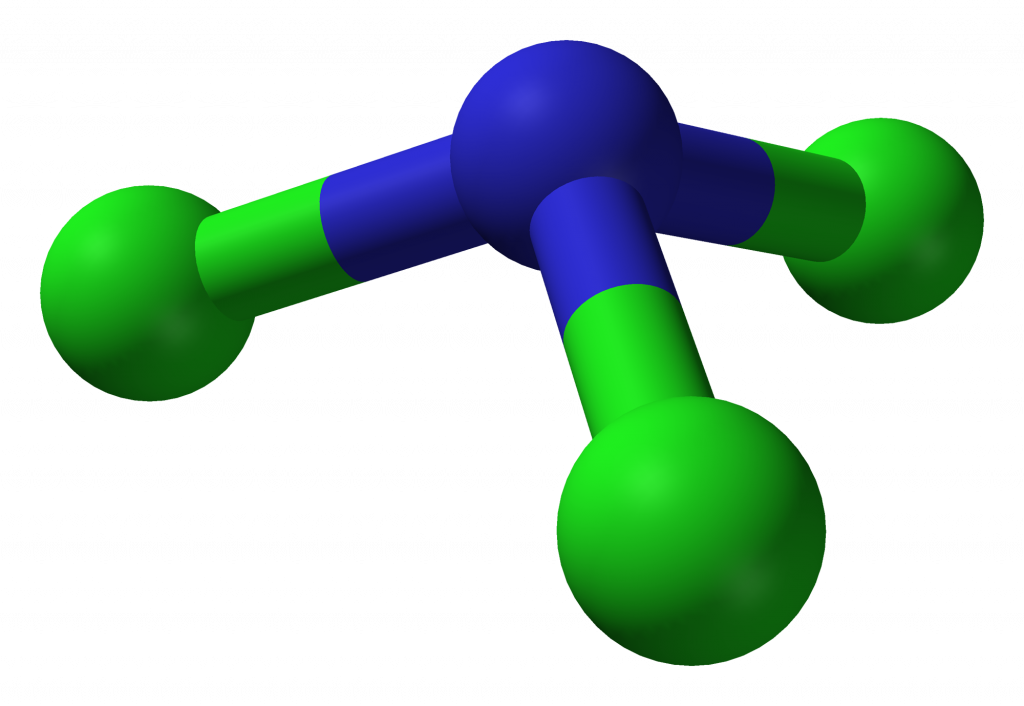 In addition to this, it is also crucial to understand that the lone pair of electrons on the nitrogen atom give the bent structure to the molecule and reduce the bond angle to 109.5 degrees from 120 degrees.

The bond length between nitrogen and chlorine atoms is 1.759 Å.

The nitrogen trichloride molecule is formed with the help of three single bonds each forming between nitrogen and one chlorine atom.

As we know the single bond is formed with the help of sigma bonds only, so there is no pi bond in the nitrogen trichloride molecule.

Due to this and the position of orbitals in the nitrogen trichloride during the excited state that the molecule undergoes sp3-sp3 head-on overlapping.

It is considered the strongest type of bond formation that makes the structure quite stable and not readily available for the formation of a bond with any atom placed nearby.

Polarity is the ability by which an atom attracts a shared pair of valence electrons towards itself to form a bond and produce a new molecule.

Polarity is a behavior that arises from the separation of electric charge in an atom that leads to the formation of one positive end and one negative.

By this, an atom starts behaving like a magnet and generates either a strong force of attraction or repulsion when comes in contact with an atom having shared pair of valence electrons.

From this, it is clear that the overall formal charge distribution on nitrogen trichloride is zero by which it should have been a nonpolar molecule.

It is crucial to know that each molecule does not follow all the conditions of polarity.

The anomaly arises from the presence of a lone pair of electrons on a nitrogen atom that creates a dipole cloud on the molecule generating the dipole moment of 0.6D.

1. It can be used as a bleaching agent.

4. It can be used as an instant explosive.

The hybridization of the nitrogen atom in nitrogen trichloride is sp3 because one 2s and three 2p orbitals mix to produce new orbitals of similar energy.