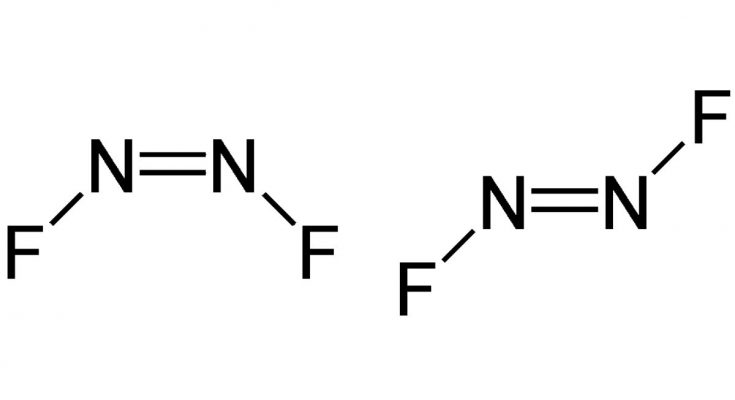 Dinitrogen difluoride, N2F2, is an inorganic compound with a molecular mass of 66.01 g/mol. It is a colorless gas at standard room temperature.

N2F2 is considered to be one of the strongest and most stable halides. It exists as cis and trans isomers.

Lewis structure is the pictorial representation of the valence electrons’ arrangement in a molecule for chemical bonding, especially for covalent bonds.

The dots indicate the placement and distribution of electrons in a molecule. It was introduced in 1916 by Gilbert N. Lewis.

The Lewis structure for N2F2 is represented as:

We already know that the elements participate in chemical bonding to satiate the octet rule.

Step 1: To draw the Lewis structure of N2F2 we will first have to determine the number of valence electrons in the molecule.

Nitrogen is a group 15 element that has 5 valence electrons and requires 3 electrons in order to complete its octet, while Fluorine belongs to group 17 and comprises 7 electrons in its outermost shell and therefore, needs just one electron.

Now, counting the total number of electrons for N2F2:

Therefore, the total number of valence electrons in N2F2 = 24

Step 2: Now, we will draw the outline of the structure with all the atoms joined through a single bond.

This step is to analyze the number of electrons further required to complete the octet of all the atoms present in the molecule.

Step 3: As Nitrogen is the least electronegative atom in the molecule, it is placed towards the center, to avoid unwanted pulling of the electrons.

Also, as every single bond represents one shared pair of electrons, it is clear from the above structure that Fluorine has received its desired electron and has acquired a stable state by sharing one electron with Nitrogen to complete its octet.

Step 4: However, both the Nitrogen atoms are still short of one electron each.

Therefore, they form a double bond amongst themselves and are finally left with just one pair of lone electrons.

Fluorine on the other hand has 3 pairs of lone electrons.

Step 5: Finally, after completing the octet of both the Nitrogen and the Fluorine atom the Lewis structure of N2F2 looks like this:

As per the Valence Shell Electron Pair Repulsion (VSEPR) Theory, the electrons inside a molecule always have a tendency to arrange themselves in a manner to avoid the inter-electronic repulsion.

Further, the immensity of repulsion is also regulated by the gap in electronegativity of the central atom and other atoms.

The shape of a molecule is determined by the number of lone pairs present as well as the extent of electronic repulsion present in the molecule.

In order to understand the molecular geometry of N2F2, we will first have to choose a central atom.

According to VSEPR Theory, it is assumed that all the other atoms in a molecule are connected with the central atom.

As in the case of N2F2 both the Nitrogen atoms are arranged in the center of the molecule, any one of them can be chosen as the central atom.

This assumption leads to a linear geometry (180°), as the atoms tend to arrange themselves as far as possible to avoid inter-electronic repulsion.

However, as discussed earlier there is one lone pair of electrons attached with the Nitrogen atom which forces both the groups present on the central atom downwards.

This results in distortion of the molecule, resulting in a bond angle of approximately 118° and forming a trigonal planar geometry.

Linus Pauling gave the theory of Hybridization in 1931.

As the name indicates it is a process of forming a new hybrid orbital, by mixing two or more atomic orbitals viz. s, p, d, etc. which should be of similar energies.

The hybrid orbitals are named after the atomic orbitals involved in their formation. For example, sp3 indicates that one s and three p orbitals combined in its formation.

Also, the p-orbitals are perpendicular to the plane which is a characteristic of sp2 hybridization.

Further, the bond order for N=N is close to 2, as per the density functional theory.

Trans-N2F2 on the other hand appears more like sp3 hybridized, as its HOMO is slightly different than cis-N2F2, but the molecules with sp3 hybridization tend to arrange their lone pair in a tetrahedral geometry.

However, as mentioned earlier the geometry of N2F2 is trigonal planar again indicating that cis-N2F2 is sp2 hybridized.

Another way to determine the hybridization of N2F2 is by looking at its Lewis structure:

Here, the central atom, Nitrogen, is bonded with another Nitrogen atom with a double bond i.e. 1σ and 1π orbital, and on the other side, it is linked with one Fluorine atom, with a single bond i.e. 1σ orbital.

This suggests three hybrid orbitals for one N-atom i.e. sp2 hybridization out of which one is used to form N – F bond, another to form N = N bond while the third is used to hold the lone pair.

Therefore, the hybridization of N2F2 is sp2.

Cis and Trans form of N2F2

The two geometrical forms viz. Cis and Trans are distinct symmetrically and exhibit properties such as boiling point, melting point, etc. different from each other.

The cis-form is more stable thermodynamically, almost 12.5 KJ/mol in comparison to the trans form. 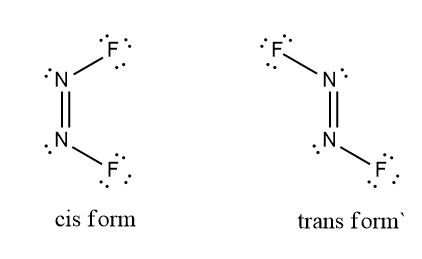 Polarity refers to the presence of two opposite charges viz. positive and negative, on different atoms of the same molecule.

This usually occurs due to the difference in electronegativity of combining atoms resulting in the formation of polar bonds.

As polarity depends upon the arrangement of atoms in a molecule the two forms of N2F2 also have different dipole moments.

2. The molecular geometry of N2F2 is trigonal planar