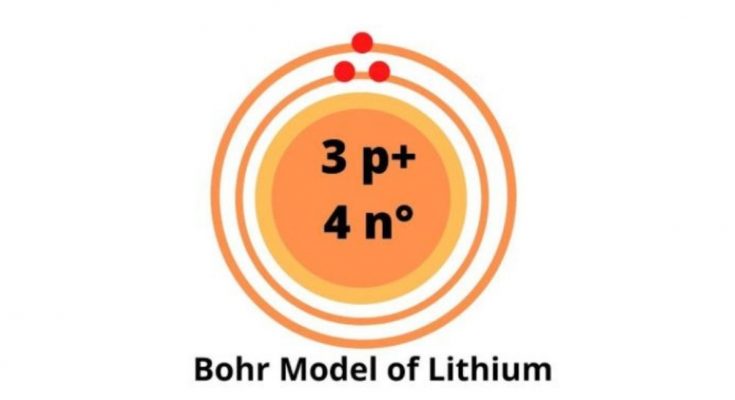 Lithium is the group 1 chemical element. It has atomic number 3 and is denoted by the symbol Li. It is a highly reactive and flammable substance due to which it is usually stored under inert conditions, mostly immersed in an inert liquid, like kerosene.

It is an alkali metal that exhibits metallic luster and is prone to corrosion when exposed to moisture. It usually occurs as an ionic compound such as pegmatitic minerals. Lithium can also be isolated electrolytically from potassium chloride and lithium chloride mixture. It is used in the preparation of lithium-ion batteries, making of glass, pyrotechnics, etc. 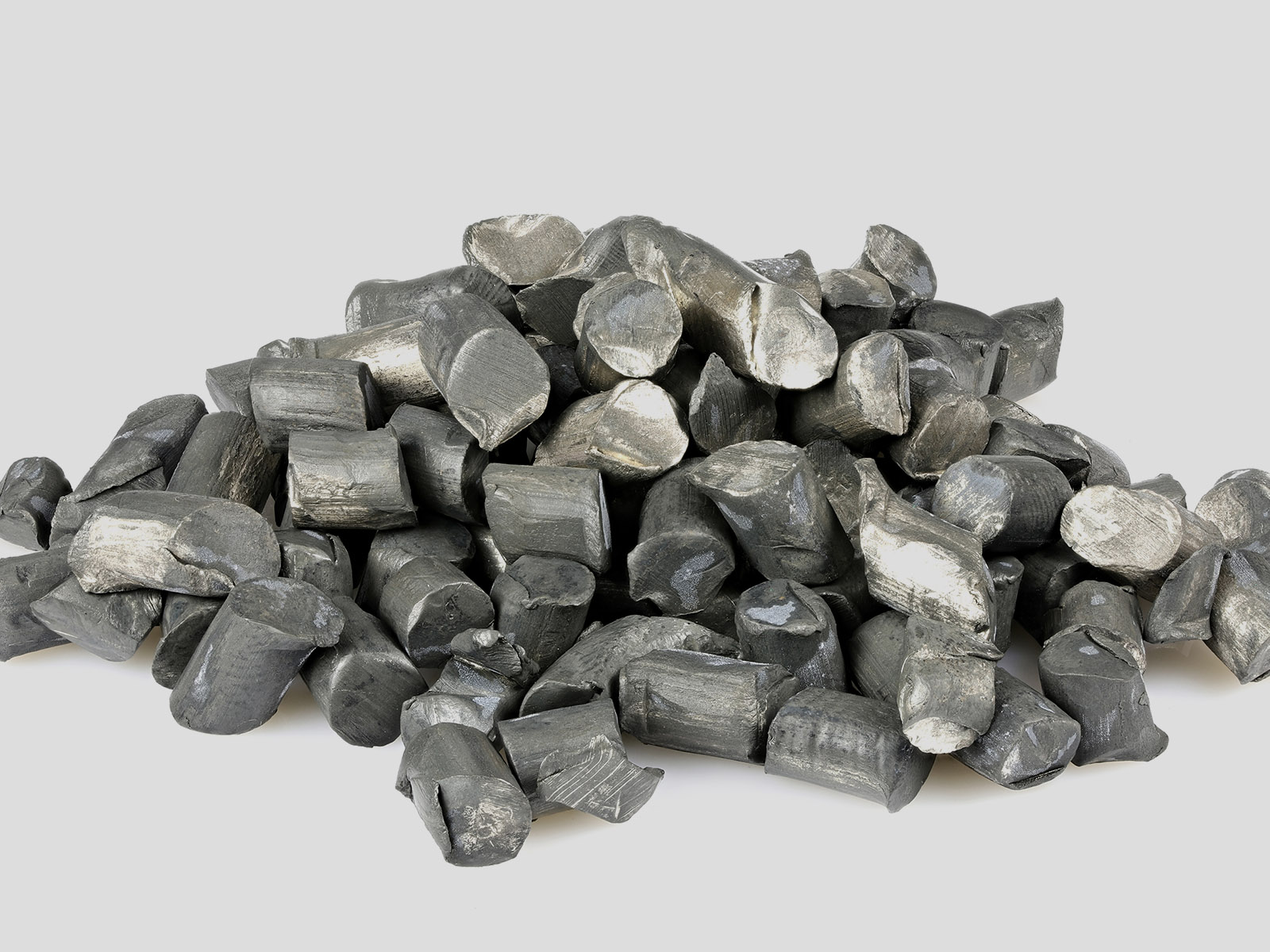 Holla folks!! So, are you guys ready for another interesting article?

Today we will talk about Lithium and its atomic structure.

The Bohr model of the atoms or more precisely, the Bohr-Rutherford model was proposed by Ernst Rutherford and Niel Bohr in 1913.

This model was actually the upgraded version of the earlier model proposed by Ernst Rutherford in 1911.

The earlier model could not provide the reason for the stability of electrons revolving around the nucleus and hence, could not keep up with the laws of classical mechanics and electromagnetic theory.

The new model i.e. the Bohr-Rutherford model explained that the electrons are the moving particles that revolve around the nucleus in a definite circular orbit that has fixed energy and size.

The Bohr model describes the structure of the atom defining the place and charge of all the atomic species. The pictorial representation also illustrates the mass number and the atomic number of the atom.

Before we move forward with the Bohr model of Lithium, I would like to describe a few terms that would help you have a better insight into the structure. They are:

• Nucleus: It is the heart or core of the atom. It exhibits a positive charge owing to its constituent particles i.e. protons. The other atomic particles present in the nucleus are neutrons.

• Protons: These are located inside the nucleus and confer a positive charge to it.

• Neutrons: These are also located inside the nucleus but are charge-neutral species.

• Shells: The electrons move around the atoms in their orbits, known as shells. These are pre-determined paths and have fixed energies associated with them due to which they are also known as energy levels.

Usually, the smallest shell, located nearest to the atom has the least energy while the largest and farthest shell has maximum energy.

The shells are also given names in numerological as well as alphabetical order. The innermost shell is assigned the lowest value which increases outwards i.e. K, L, M, N, etc., or 1, 2, 3, 4, etc. The electron carrying capacity of the shell also increases outwards

The electrons located in the shell nearest to the nucleus i.e. the K shell are said to be in the ground state, similar to their assigned shell they also carry maximum energy out of all the electrons.

Similarly, the electrons housed in the shell farthest from the nucleus (here, the name of the shell may differ with the type of atom) have the highest energy and are called, valence electrons, while the shell is known as the valence shell

The Lithium atom consists of 3 protons and 4 neutrons in the nucleus, and 3 electrons revolve around the Lithium atom in 2 shells i.e. K and L shells.

Lithium belongs to group 1 and period 2 of the periodic table. Its location is described below: 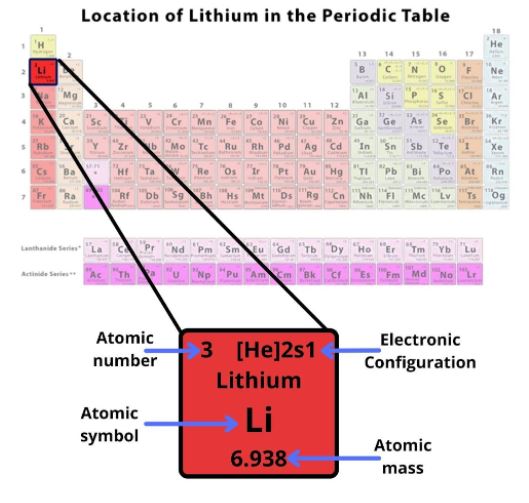 The information that we can derive from the above-mentioned Lithium box is as follows:

• Lithium has electronic configuration [He] 2s1.

• Lithium has the chemical symbol Li.

Now, we can draw the Bohr model of the Lithium atom with the help of this information.

First, we will calculate the number of protons

In the case of the Lithium atom, the atomic number is 3.

Therefore, for the Lithium atom, the number of protons = atomic number = 3

Further, we will calculate the number of neutrons present in the Lithium atom.

Looking at the Lithium box that we drew above, we can say that the atomic mass of the Lithium atom is 6.938.

After rounding it up to the nearest whole number we get 7.

Also, as calculated above, the number of protons in the Lithium atom is 3.

Now, finding the number of neutrons by applying the formula:

Hence, number of neutrons in the Lithium atom = 4

Using these values we will draw the nucleus of the Lithium atom. 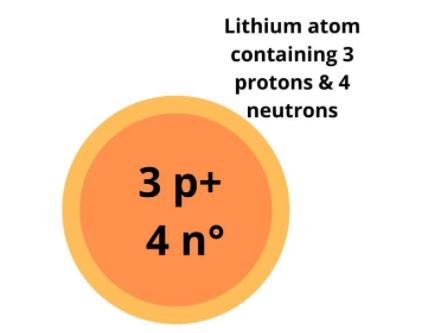 Now, we will calculate the number of electrons for the Lithium atom.

Actually, the number of electrons, as well as protons in an atom, is the same, as they both are equal to the atomic number of the atom.

Therefore, for the Lithium atom also,

Here, it is important to mention that electrons are the only type of atomic particles that are located outside the nucleus.

Each electron has a specific shell where it is housed depending upon its energy. That is why each shell has a specific number of electrons that it can accommodate.

But, how do we calculate the number of electrons for a given shell?

Don’t worry! a specific formula is used to do the same. It is given as 2n2.

Here, n refers to the number of shells.

Now, we will use the same formula for the Lithium atom. 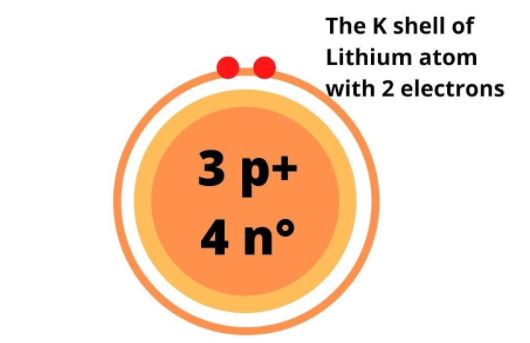 Now, we are left with one more electron that will be accommodated in the second shell of the Lithium atom.

First, let us calculate the maximum number of electrons for the second shell or L shell

Hence, a maximum of 8 electrons can be housed in the L shell of an atom.

However, as we are only left with one electron we will place the same in the L shell. After this the final Bohr model of Lithium appears as follows: 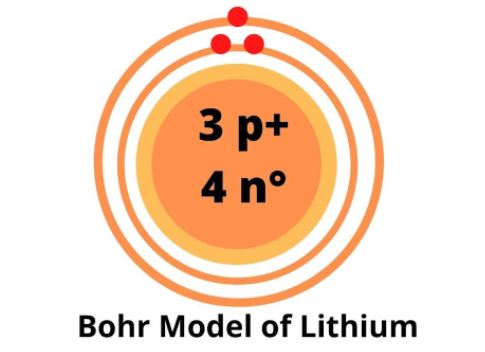 Hence, the final Bohr model of the Lithium atom consists of 3 protons and 4 neutrons inside the nucleus, and 3 electrons revolving around the nucleus. There are 2 electrons present in the K shell and 1 electron in the L shell.

The Lewis diagram of an atom represents its atomic structure in the pictorial form.

It illustrates the nucleus of the atom along with its valence electrons. The atomic symbol of the element represents the nucleus while the dots represent the electrons. Hence, these are also known by the name electron dot structure.

From the discussion in the previous section, we know that the Lithium atom consists of 3 valence electrons. Hence, the Lewis diagram of Lithium is drawn as follows: 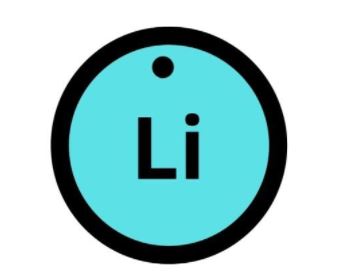 A few important properties of Lithium are listed below:

• Lithium is a highly flammable and reactive alkali metal element.

• It is silvery-white in appearance and soft to touch.

• In nature, it exists in the form of two isotopes viz. Li6 and Li7 isotopes.

• The Lithium atoms are arranged in a Body-centered cubic lattice structure.

The Bohr model of the Lithium atom has 3 protons and 4 neutrons in the nucleus. The 3 electrons revolve around the nucleus.

The formula for the number of neutrons is:

In the Bohr model, the maximum number of electrons associated with a shell is calculated by the formula 2n2, where n is the number of shells.

The Lithium atom consists of two shells viz. K and L shells that have 2 and 1 electron, respectively.