Xenon Tetrafluoride (XeF4) was the first discovered binary chemical compound of a noble gas (Xenon). An exothermic chemical reaction of Xenon (Xe) with Fluorine (F), leads to the production of XeF4. A colorless, crystalline substance, its structure has been established by two methods: NMR Spectroscopy and X-Ray crystallography.

Is XeF4 polar or non-polar? Xenon tetrafluoride (XeF4) is a non-polar chemical compound, owing to its symmetrical square planar structure. The individual Xe-F bonds are polar due to unequal electronegativity of Xe and F atoms, but the net vector sum of the polarities of Xe-F bonds is zero as they cancel out each other. So, the net dipole moment of XeF4 is 0 Debye.

The electronegativity of Xenon is 2.6 and that of fluorine is 3.98.

The difference is pretty significant. This means that the individual Xenon-Fluorine (Xe-F) bonds are polar in nature.

The polarity of the complete XeF4 structure

The molecular geometry of XeF4 is square planar. With the two lone pairs placed axially opposite to each other, the overall structure of the concerned molecule is symmetric.

The molecular polarity is determined by the vector sum (magnitude and direction both are considered) of all individual bond dipoles.

In XeF4, there are four Xe-F bonds, each having an individual dipole moment with a magnitude and a direction. When we take the vector sum of these dipoles, it adds up to be a net-zero Debye.

There are twelve atoms around Xenon- eight from the four fluorine bonds (two from each bond) and two lone pairs of electrons. Of these, four are non-bonding electrons.

Owing to the symmetric arrangement of the Xe-F bonds and the non-bonding electron pairs, the net effective dipole across the whole molecule is zero. Therefore, XeF4 is a non-polar molecule (or compound) by nature.

Factors influencing the Polarity of a molecule

There are numerous factors that help decide whether a molecule is polar or non-polar. The polarity of a molecule is basically the measure of its dipole moment.

If the dipole is a considerable number (not equal to 0 Debye), the molecule is said to be polar.

The dipole moment, and hence the polarity of any molecule largely depends on:

1.) Structure: Molecules with the symmetric arrangement of atoms that form them, tend to have a net-zero vector sum of dipole moments.

This is because, for every polar bond, there will be another polar bond with a dipole that is equal in magnitude and opposite in direction, making the net addition equal to zero.

Thus, symmetric molecules are non-polar in nature while those without symmetricity are polar.

On the other hand, the existence of strong Hydrogen bonds leads to an amassing of charges and result in the polarity of the molecule.

Electronegativity of atoms: If the atoms that form any bond are similar or the difference in their electronegativity is less than 0.4, then the bond so formed is considered non-polar.

Check out the article for the non-polarity of CBr4. Any dipole moment developed in such a molecule is insignificant and does not help establish polarity.

Charge build-up: When there is an accumulation of negative charges at one end of the molecule and positive charges on the other, along with a significant dipole moment, the molecule is said to have some polarity.

For example, NCl3 is a polar molecule due to the difference between chlorine and nitrogen atoms. Here is the article for the polarity of NCl3. Otherwise, it is considered non-polar.

The hybridization in XeF4 takes place in the central atom Xenon (Xe). The valence shell of Xe has six electrons in 5p orbital and two in 5s, while the f- and d- orbitals are empty.

So, two of the electrons (in an excited state) from the 5p orbital move to 5d orbital to fill the vacancies. This results in an sp2d2 hybridization.

Four fluorine atoms then bond with the four half-filled orbitals and are placed on either side of the central atom. The hybridization of Xenon and Fluorine atoms suggests the molecule to have octahedral geometry.

According to the VSEPR (Valence Shell Electron Pair Repulsion) Theory, the repulsion has to be minimized between the two lone pairs of electrons.

This is possible when they are placed opposite to each other, and the Fluorine atoms occupy the equatorial positions.

Hence, the overall molecular geometry of XeF4 comes out to be square planar, with a bond angle equal to 90° or 180°.

For detailed knowledge, you must read out an article on XeF4 lewis structure, and geometrical structure. 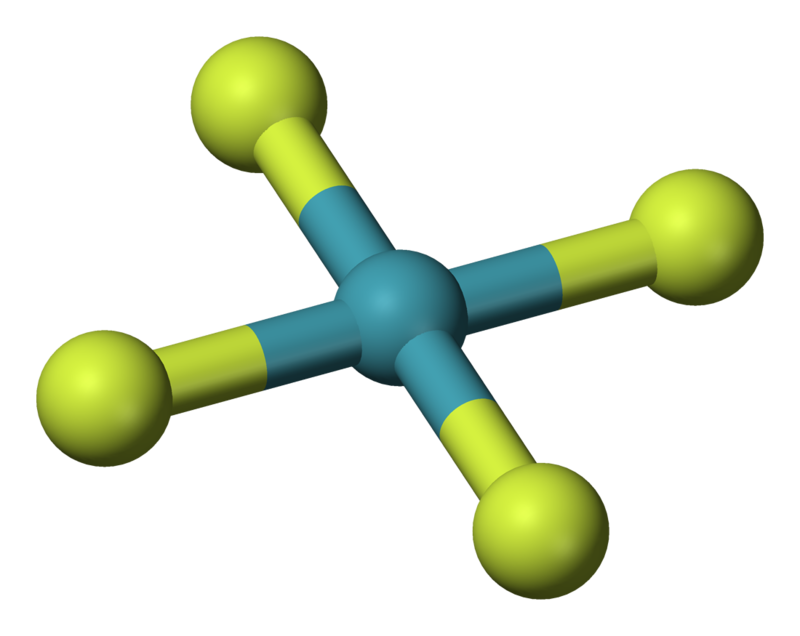 The process of formation of Xenon Tetrafluoride is an exothermic process that releases net energy of about 251 kJ/mol.

The chemical equation for the same can be written as:

On heating, a mixture of Xenon (Xe) and Fluorine (F2) in the molecular ratio 1:5, in a nickel (Ni) container or tube, at 6 atm., and a temperature of 400°C, the two elements react to form XeF4 (Xenon tetrafluoride).

Nickel in this reaction does not act as a catalyst. It is merely used because the Ni in the containers reacts with Fluorine to form a protective, non-peeling layer of NiF2 (Nickel fluoride) on the inner walls of the tube or the container.

Applications and Uses of XeF4

In general, XeF4 has very limited applications. Some of them are as listed below:

As discussed, the XeF4 molecule has a symmetrical square planar shape due to which all the XeF4 bonds have an equal and opposite dipole. Xe and F forms a covalent polar bond due to the difference in electronegativity of both atoms and also result in a net dipole. But all Xe-F bonds cancel out dipole of each other making the overall molecule a nonpolar.

If you guys have questions related to polarity. Ask them in the below comment section. I will clear all your doubts there too.