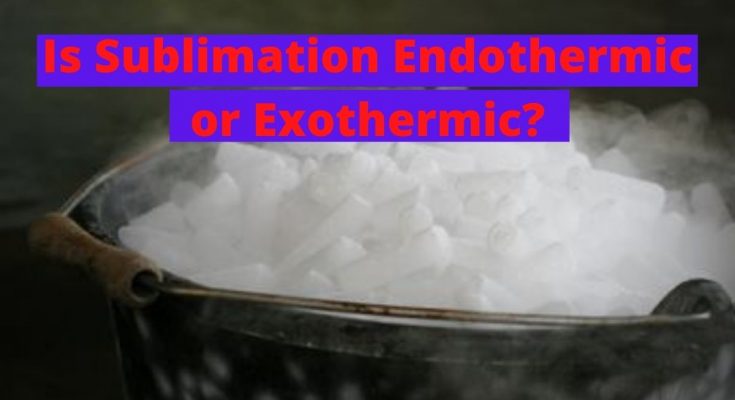 Sublimation is a phase transition process wherein a substance changes from a solid directly to a gas without forming an intermediate liquid state. It’s an exceptional case of vaporization. It occurs when the pressure and temperature of a substance are below its triple point in its phase diagram.

The triple point of a substance is the temperature at which it can exist in all three states i.e., solid, liquid, and gas in equilibrium.

In this article, we’ll provide you with a detailed explanation about sublimation and whether it’s endothermic or exothermic?

So, is sublimation endothermic or exothermic? It’s endothermic. This is because sublimation requires energy in some form to convert a solid to a gas. Usually, heat energy is supplied to conduct sublimation to bring about the physical change from a solid to a gas. Sublimation occurs by absorbing heat that provides adequate energy to break the intermolecular force of attraction between the molecules of a solid substance and transform it into a gas.

Why is Sublimation an Endothermic Process?

The molecules of a solid are tightly packed. There exists a strong intermolecular force of attraction between them.

To break this rigid structure, we require energy to be supplied to conduct its sublimation.

For instance, solid to liquid, liquid to gas, and solid to gas. Hence, sublimation is an endothermic process.

When Does Sublimation Occur?

As temperature rises, the vapor pressure of a substance increases.

Sublimation occurs when the heat absorbed by the substance from its surrounding is adequate to break the intermolecular force of attraction between its molecules to conduct a phase change from solid to gas.

What factors determine the rate of Sublimation?

The rate of sublimation is determined by the following factors:

The rate of sublimation increases with an increase in the surface area of the solid.

As more area of the solid substance gets in contact with its environment, more energy gets absorbed by its molecules. Thus, speeding up its sublimation process.

This is because wind speed helps in decreasing humidity by moving away vapor particles present in the atmosphere.

The sublimation rate of a substance is directly proportional to its time of exposure to the atmosphere. Hence, the longer the exposure, the faster the rate of sublimation will be.

Latent heat is defined as the heat required by a substance to convert itself from a solid to a liquid or a gas without changing the temperature.

The rate of sublimation increases with an increase in latent heat.

Difference Between Endothermic and Exothermic Processes? 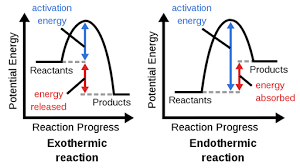 To differentiate between the two processes, it is crucial to keep tabs on the change in temperature by placing a thermometer in your reaction sample.

A few examples of sublimation are as follows: 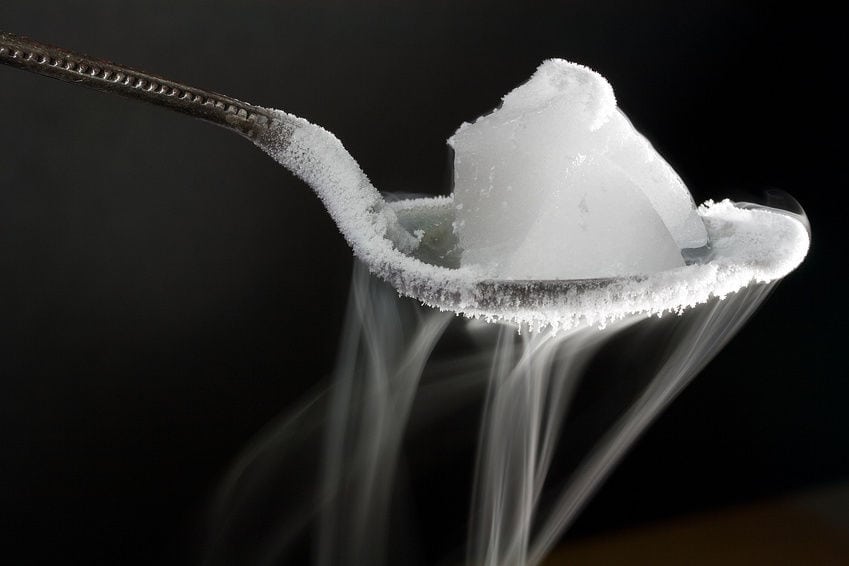 • Iodine Crystals: When iodine crystals are placed in a container and heated around 100 degrees, a purple-colored gas is evolved.

• Arsenic: Arsenic undergoes sublimation when heated at around 615 degrees.

• Naphthalene Mothballs: The sublimation of naphthalene is similar to that of dry ice. It sublimes when exposed to air.

• Sulfur: Sulfur sublimates into hazardous gases at temperatures around 25 to 50 degrees.

• Ice Crystals: Packets of frozen food come with ice crystals that sublimate and release gas when they come in contact with air.

• Room Fresheners: Fresheners used for bathrooms, bedrooms, and cars sublimate when exposed to air. The fragrance is carried around by the movement of air particles in the atmosphere.

Following are the applications of the sublimation process:

• Erosion and sublimation result in ablation. Ablation is the process that facilitates the elimination of snow and ice from glaciers and icebergs through processes like evaporation and melting.

• In organic chemistry, sublimation is used for the purification of compounds.

• Dry ice is used for creating fog effects. It is also used for the transportation of goods that require low temperatures.

Which processes are endothermic?

Fusion is the process when two atoms collide and fuse to form a bigger atom.

Vaporization is the process wherein a solid or a liquid converts into a gas.

Which processes are exothermic?

Fission is the process when a neutron collides with an atom and excites it to form two smaller atoms. Freezing is a process wherein a liquid is converted into its solid state when the temperature meets its freezing point.

Is sublimation of camphor endothermic or exothermic?

Since heat is required to conduct the sublimation of camphor, it is an endothermic process.

Is sublimation of dry ice endothermic or exothermic?

Sublimation of dry ice is an endothermic process. This is because heat is absorbed by the system to take the reaction forward.

Is sublimation a reversible process?

Is sublimation a chemical change or a physical change?

Sublimation is a physical change. A solid gets converted into a gas. There is no change in the chemical composition of the substance.

Is sublimation of iodine a chemical change?

At times, iodine sublimation is called a physio-chemical process since we observe a physical as well as a chemical change.

Is Melting Exothermic or Endothermic

Is Salt Water a Compound

Do Photons Have Mass

Is Diamond an Element

Is Air a Homogeneous Mixture

Is Alcohol a Compound

Sublimation is a phase transition process wherein a substance converts from a solid to a gas without forming an intermediate liquid state. It is an endothermic process because the energy in the form of heat is required to break the intermolecular forces of attraction present between the molecules of the solid to convert it into a gas.

Sublimation is a physical change whose rate depends on factors like temperature, surface area, humidity, wind speed, time of exposure, and latent heat. It’s an irreversible process with several applications in our daily life.