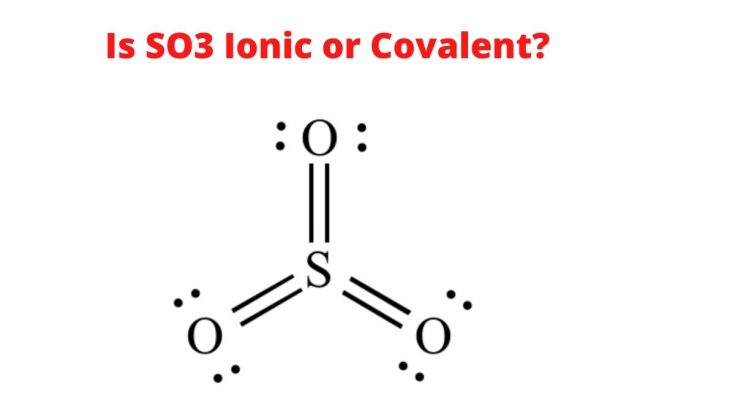 Sulfur trioxide is also known as nisso sulfan, and is denoted by the chemical formula, SO3. It occurs as a colorless to white crystalline solid and reacts violently with water. It also occurs in gaseous and liquid form and fumes in the air to form toxic vapors.

It is corrosive to metals and also, causes irritation to the eyes and skin of humans. It exists in monomeric as well as polymeric form. It is also considered the most important sulfur oxide, economically.

It is used in the manufacturing of paints, in electrical equipment, in water treatment, in building and construction material, in air emission control, etc.

Hello folks!! In this article, we will answer your queries related to sulfur trioxide.

We will study why and how in the coming sections.

Contents show
What type of bond does SO3 contain?
Why is SO3 a Covalent Molecule?
Covalent Vs. Ionic bond
Why is SO3 not Ionic?
Is SO3 Polar or Non-polar?
Conclusion

What type of bond does SO3 contain?

Before getting to the answer, we must first understand why atoms form bonds at all.

Actually, every atom has a tendency to become stable. As the stability of an atom depends upon the number of electrons present in its valence shell, every atom tends to complete its octet. This is the reason for the bond formation.

In a bond, the atoms gain, lose, or share their electrons depending upon their requirement.

The ability of an atom to attract the electrons, shared in the formation of a bond, towards itself, is known as its electronegativity.

The difference in the electronegativity of the two atoms participating in the bond formation decides the nature of the bond formed.

In a polar covalent bond, the shared pair of electrons slightly shifts towards the atom having more electronegativity.

On the other hand, in a non-polar covalent bond, the electrons are shared more or less equally between the two combining atoms.

However, the net charge on the sulfur trioxide molecule is zero owing to its geometry, due to which the molecule in itself is non-polar.

Why is SO3 a Covalent Molecule?

Moreover, both sulfur and oxygen belong to group 16 of the periodic table and contain 6 valence electrons in their outermost shell. Thus, both these atoms require two electrons each to complete their octet.

Further, the difference between the electronegativity of sulfur and oxygen lies below 1.6.

Hence, it further indicates that the bonds formed between the oxygen and sulfur atoms in the SO3 molecule are covalent.

Till now, we have studied a lot about why and how the covalent and ionic bonds are formed. In this section, we will study more about the difference between these two bonds.

The atoms form bonds to stabilize themselves and a number of factors determine the nature and characteristics of the bond formed. Let us learn how:

• The ionic compounds are formed when one atom donates its electron or electrons to another atom, while a covalent bond is formed when the electrons are shared between the participating atoms.

• The ionic bond is only of one type while the covalent bond can further be divided into polar and non-polar covalent bonds, based upon the difference in the electronegativity of the participating atom.

• When the ionic compounds are dissolved in an aqueous solution, they usually result in the formation of a positive (cation) and a negative (anion) ion. On the other hand, the covalent compounds normally do not dissolve in water.

• The melting and boiling points of ionic compounds are usually higher in comparison to the covalent compounds.

• The ionic compounds mostly occur as solids at room temperature, while covalent compounds occur as liquids or gases.

Why is SO3 not Ionic?

As discussed in the previous section, ionic compounds are formed when the difference between the electronegativity of the two atoms involved in the bond formation is more than 1.6.

Also, ionic bonds are formed when a metal atom bonds with another metal atom, a non-metal atom, or a polyatomic ion.

In the case of sulfur trioxide, both the participating atoms i.e. oxygen and sulfur are non-metals, indicating that the bond formed between these two atoms cannot be ionic.

Further, the electronegativity difference between these two atoms is below 1.6. Hence, sulfur trioxide is not an ionic compound.

Is NaCl Ionic or Covalent

Is NH4Cl Ionic or Covalent

Is H2O Ionic or Covalent

Is MgO Ionic or Covalent

Is PCl3 Ionic or Covalent

Is CaF2 Ionic or Covalent

Is H2S Ionic or Covalent

Is AlCl3 Ionic or Covalent

Is CO Ionic or Covalent

Is CaO Ionic or Covalent

Is SO3 Polar or Non-polar?

So far we have discussed that the bonds formed between the sulfur atom and the oxygen atoms, in the sulfur trioxide molecule are covalent.

We have also learned that the bond is polar in nature as the difference in the electronegativity of the sulfur and oxygen atom lies between 0.4 and 1.6. Therefore, the bond is termed a polar covalent bond.

However, to your surprise, the SO3 molecule in itself is non-polar.

Wondering how? Let me explain

As visible from the above figure, the three double bonds (S=O) between the sulfur and oxygen atoms are positioned at an angle of 120° from each other.

Therefore, the polarity that arises in the S=O bonds, owing to the electronegativity difference between the two atoms, cancels out amongst each other.

Hence, the overall polarity of the sulfur trioxide molecule becomes zero and the SO3 molecules become non-polar in nature.

• The sulfur trioxide molecule is covalent as both the participating atoms i.e. sulfur and oxygen are non-metals.

• The difference in the electronegativity of the sulfur and oxygen atom is between 0.4 and 1.6. Therefore, the bond is polar covalent.

• The SO3 molecule is non-polar as the geometry of sulfur trioxide is trigonal planar and the three S = O bonds lie at an angle of 120° from each other. Thus, the polarity of the bonds cancels amongst themselves.