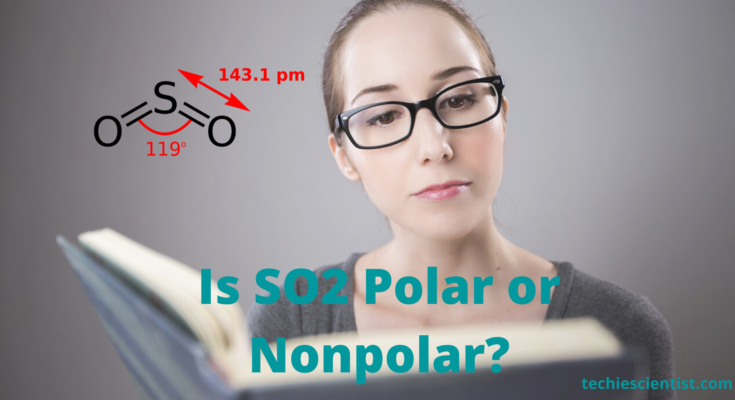 Is SO2 polar or nonpolar? SO2 is polar in nature because of the difference in electronegativity between sulfur and oxygen atoms. The greater the difference in electronegativity more will be the polarity of the molecule. The bent shape of SO2 is because of the repulsion between the unbonded electrons present on the sulfur and oxygen atoms. The unsymmetrical shape also identifies whether a molecule is polar or not.

Contents show
Why is SO2 Polar?
Factors affecting the polarity of a chemical compound
SO2 Bond Angle
Polar and Non-Polar Compounds
Conclusion

Why is SO2 Polar?

And after bonding in the SO2 molecule, the unequal charge remains on Sulfur and Oxygen. 2 unbonded electrons remain on Sulfur and 4 electrons on both of the Oxygen atoms.

Therefore, unequal charge distribution occurs after the bonding of the SO2 molecule. The lone pair present on Sulfur and lone present on Oxygen atoms cause repulsion between each other.

Oxygen is more electronegative than Sulfur, as a result, the Oxygen-Sulfur bond shares unequal charge distribution, and the bond formed in it is polar.

Similarly, in the SO2 case,  the lone pair present on Sulfur and Oxygen atoms produces repulsion between them.

In such cases as SO2, where more than one lone pair group is present, the geometrical shape of the molecule is slightly different as compared to the molecule where all groups are bonds.

Factors affecting the polarity of a chemical compound

You can read out the article for the reason of the non-polarity of CO2.

The calculated dipole moment of SO2 (sulfur dioxide) is 1.6 debyes.

It is better to understand that the difference in electronegativity is one of the main factors that affects polarity.

The polarity of a molecule is directly proportional to the difference between the electronegativities of the atoms involved in the molecule.

In the world of chemistry, electronegativity is a measure of how strongly an atom can attract an electron towards itself.

The SO2 molecule forms the shape of the trigonal planar. The lone pair repulsion among the Oxygen and Sulfur forms a bent shape and the angle between the bonds is found to be around 119-120 degrees.

The position of the atoms in the SO2 is such that the Sulfur atom is present in the center/between both of the Oxygen atoms.

We all should understand that when two atoms form a bond, they basically share electrons from each other.

And also, it is important to keep in mind that two different atoms do not equally share the electron of each other. It is because of the electronegativity difference.

As per the studies already done, the bond formed between two atoms is polar covalent if the electronegativity difference lies between 0.5 and 1.6.

In this bond, the center of negative charge does not lie in the center. It would be at the end of an atom with greater electronegativity.

If you are a student of science, it is very helpful to remember that as you move right in the periodic table of chemistry, the electronegativity of elements gets higher.

Also, as you move up in the periodic table, the electronegativity of the elements gets higher.

Thus, if you want to check if a molecule is polar or not.

You should note down the value of electronegativity of atoms involved in the molecule, the number of lone pairs and bonds.

And the overall geometrical shape of the molecule. This information is sufficient to conclude whether the molecule is polar or non-polar.

I hope, I cleared your all doubts regarding the polarity of SO2 and also made you understand the fundamentals of the polar and non-polar bonds.