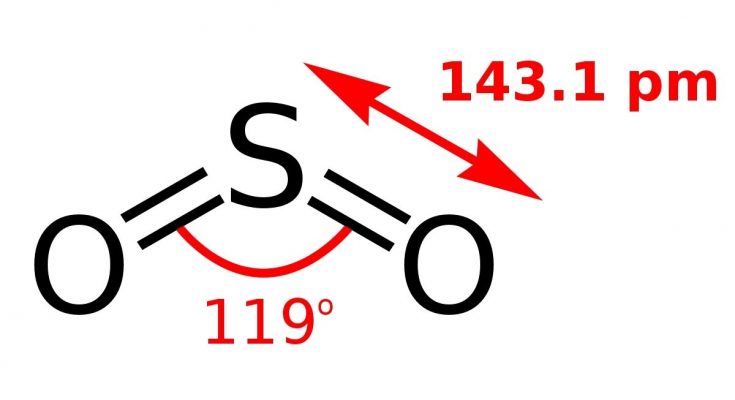 A very common question that is frequently asked is whether sulfur dioxide is an Ionic or Covalent bond. Before answering the question it is important to understand certain characteristics of sulfur dioxide. It is a toxic colorless gas that indirectly contributes to greenhouse gas.

Although the presence of sulfur dioxide is not abundant in the atmosphere of the earth, the traces of its presence can cause serious health impacts. The colorless gas is associated with a pungent odor which can contribute to choking or suffocation. Sulfur dioxide is widely used for manufacturing chemicals, pulping paper, for processing food and metal.

In scenarios where atoms share electrons in order to complete the structure of an octet, this results in the formation of covalently bonded compounds.

The Lewis Structure will give a clear idea about the resonance structure which results in the formation of the Covalent Bond by Sulphur Dioxide.

The VSEPR Theory helps in determining the polarity of the molecule Sulphur Dioxide which impacts the Covalent Bond shared by SO2.

Owing to the Covalent Bond formed by the SO2 molecule, the Sigma and Pi Bond of SO2 will have an influential impact.

Position of Sulphur and Oxygen in the Periodic Table

There are three shells of sulphur which are namely the K, L and M.

Similar to that of Sulphur, Oxygen as well as belongs to the group VI A. Oxygen is the first element of the group and therefore belongs to the 2nd period. It has two shells namely the K and L.

Popularly known as electron dot structure or Lewis dot structure is a representation of the bonds which are formed in between the elements of a molecule with the help of a diagram.

You must also read out the article written on the lewis structure, geometry of SO2.

The diagrammatic representation of the structure shows that all the elements of the molecules will have 0 formal charges.

The First Structure of Resonance

The electronegativity of Sulphur is 2.58 while for Oxygen it is 3.44. Therefore, oxygen being comparatively more electronegative in nature will be placed on either side.

The elements being nonmetal with 6 valence electrons will thus form Covalent bonds.

Sulfur will be able to make a double Covalent bond with one of the oxygen atoms.

As a result of which now both the atoms will have 8 electrons.

However, there will be one atom of oxygen that would be left behind as it needs 2 electrons.

In this case, Sulphur will be able to donate 1 lone pair to the oxygen atom resulting in the formation of a coordinate Covalent bond.

This completes the resonance structure and at the same time also satisfies the octet rule.

The Second Structure of Resonance

As discussed above, Sulphur has 3 shells and therefore it has d orbit.

Being capable of holding more than just 8 electrons, another resonance structure can be formed if the coordinate Covalent bond is removed thus by making a double Covalent bond.

In such a case the molecules will be neutral.

It can be doubted out of the two resonance structures which is more accurate.

We have tested both the structures and can therefore conclude that the actual structure can be drawn in between these two structures.

There is going to be the presence of only one intermediate structure as the resonance structures are not constantly changing.

The underlying reason for the intermediate resonance structure is the presence of the delocalized pi bond.

Owing to the weak structure of the pi bonds they are able to delocalize themselves as a result of which a complicated intermediate resonance structure is formed. 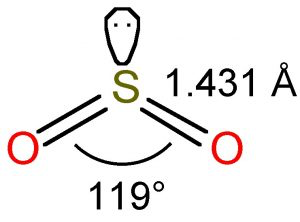 In order to elaborately understand the geometry of the molecule along with its bond angle and its polarity, it is important to have an idea about the Theory of Valence Shell Electron Pair Repulsion.

The theory suggests that electron pairs have a tendency to repel against each other to a position where the electrons are least repulsive. As a result of which, certain molecules are straight while some are bent.

The process of hybridization also plays a major role. During the process of bond formation, the orbits having different energies degrade themselves and also result in the formation of similar numbers of identical orbits.

Consider the molecule of Sulphur Dioxide (SO2). The atoms of sulfur and oxygen will have 1s and 2p orbitals which are hybridized.

The SO2 molecule is bent and not linear (straight). This is the prime reason for the SO2 molecule’s polarity where the angle of the bond is 120° and comprises a trigonal geometry.

The SO2 molecule not being linear, charges are unable to cancel out each other, and therefore SO2 forms a polar molecule.

A similar molecule of NO2 is also bent-shaped. Check out the NO2 geometry.

According to the resonance structure where one double Covalent bond will have 1 sigma and 1 pi bond present, we can state that SO2 has 2 sigma and 2 pi bonds.

This can be owed to the 2 double Covalent bonds which SO2 possesses where 2 oxygen atoms will have one separate sigma and pi bonds respectively.

Acidic Nature of SO2

SO2 is not alkaline and is completely acidic in nature. Once dissolved in water it will start reacting with the water molecule resulting in the formation of sulfurous acid H2SO3.

Being the polar molecule SO2 easily dissolves in water however, the sulfurous acid ( H2SO3) is a weak acid as compared to the Sulphuric Acid (H2SO4).

SO2 as an Oxidizing Agent as well as Reducing Agent

Another interesting fact about Sulphur Dioxide is that it can act as both an Oxidizing Agent as well as a Reducing Agent.

As a result, Sulphur Dioxide can lose as well as gain electrons and therefore acts as both oxidizing and reducing agent.

The Dipole State of Sulphur Dioxide

In the molecule of Sulphur Dioxide, there is a slight difference in electronegativity as we have discussed above.

The difference of electronegativity between the atoms of sulfur and oxygen as well as SO2 being a polar molecule tends to have a dipole state or moment.

Therefore, it can be fairly stated that a dipole moment or state exists in SO2 where the value is 1.61 Debye.

Summarising the concept we can now understand that Sulphur Dioxide (SO2) is a colorless gas with a slightly pungent odor which is extremely harmful and can cause choking problems. SO2 shares a Covalent bond and therefore the molecule can rightly be said as a Covalent compound.

SO2 has a bent structure and is not linear in nature. The bond angle being 120° SO2 becomes a polar molecule as the charges are unable to cancel the effects of each other. Sulfur Dioxide when dissolved in water forms the weak sulfurous acid H2SO3 and their SO2 is acidic in nature.

The polar molecule SO2 acts as both oxidizing as well as reducing agent and has a dipole value of 1.61 Debye.