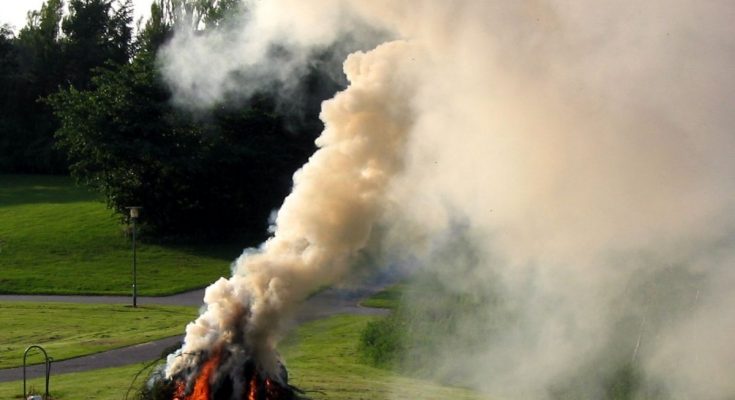 In the vast world of science, billions of everyday occurrences still cannot be explained. There is no answer to questions like, “what are the boundaries of the universe?” or “what is consciousness?”.

Be that as may, today, we will answer a question that science can fortunately answer.

Is smoke a colloid? Yes, smoke is a colloid. It is classified as an aerosol ie; colloidal solution in which the dispersion medium is in gaseous form and the dispersed phase exists in the form of solid. The size of minute solid particles ranges from around 1 nm to 1000 nm.

Colloids can simply be described as mixtures in which one substance is divided into minute particles and then dispersed throughout another substance.

Are you a science enthusiast who has been thinking this ever since you found out about colloids? If yes, then don’t worry.

Just stay with us till the end of this article, and we will tell you everything you need to know about colloids, their types, and more.

A collection of minute particles of solid, liquid, and gas is termed smoke. Smoke contains hundreds of chemicals and fumes. However, visible smoke is typically made of carbon, tar, oils, and ash.

The formation of smoke only takes place in a case of incomplete combustion. There is a simple explanation behind this: the presence of oxygen is too little to burn off the substance or fuel completely.

So, instead of the production of only water vapor and carbon dioxide, smoke, soot, and ash are also created.

In simpler words, smoke is just an integration of the unburnt particles.

Although the particles cannot be seen individually through the naked eye, they appear together in the form of smoke.

What is a Colloid?

A colloid is a homogenous blend of substances that may consist of large or ultra-microscopic particles of one substance dispersed through another.

Non-crystalline in nature, the colloid particles do not settle and cannot be filtered out using conventional methods such as filtering and centrifuging.

Some examples of colloids include soaps, dyes, sols, and emulsions.

Colloids are classified into two categories: reversible and irreversible systems.

In the reversible system, products of a chemical or physical reaction may be encouraged to fuse to reproduce the original component.

Soaps, dyes, and detergents are a few examples.

The reaction of the products of the irreversible system is stable or removed in such a manner from the system that its original elements cannot be produced.

The scientific research and study of colloids took place in the early 19th century.

The British botanist Robert Brown, with the help of a microscope, was able to discover minute particles that were dispersed in liquid; in a continual and random motion.

What type of colloid is smoke?

Although we know that smoke is a colloid, many of you may be wondering what type of colloid smoke is. In this section, we will be talking about this topic.

Colloids can be created using any blend of liquid, gas, or solid. The tiny particles in a colloid are termed “dispersed materials.”

If a colloid constitutes dispersed solid in gas, then it is called smoke.

On the other hand, any colloid in which the liquid is dispersed in the gas is known as fog.

Are colloids solid in nature?

Now that we have learned that smoke is a colloid let us move on to the properties of colloids.

Colloids are combinations of one or more dispersed elements.

These dispersed particles may be solid particles or liquid droplets dispersed through a solid, liquid, or gaseous medium.

Unable to settle due to gravity, these particles are suspended in colloids and are often electrically charged.

Moving on, let’s take a look at some of the features of colloids:

1. Colloids exhibit “Brownian movement” a random zigzag motion of particles that can only be viewed under a microscope. The motion occurs due to the collision of molecules with the particles in the suspended medium.

2. Colloids also display the “Tyndall effect“ which occurs when a strong light is flashed through a colloidal dispersion, and the particles become visible like a column of light.

For example, when a spotlight is turned on during a foggy night. The beam is visible due to the trace it forms in the fog. 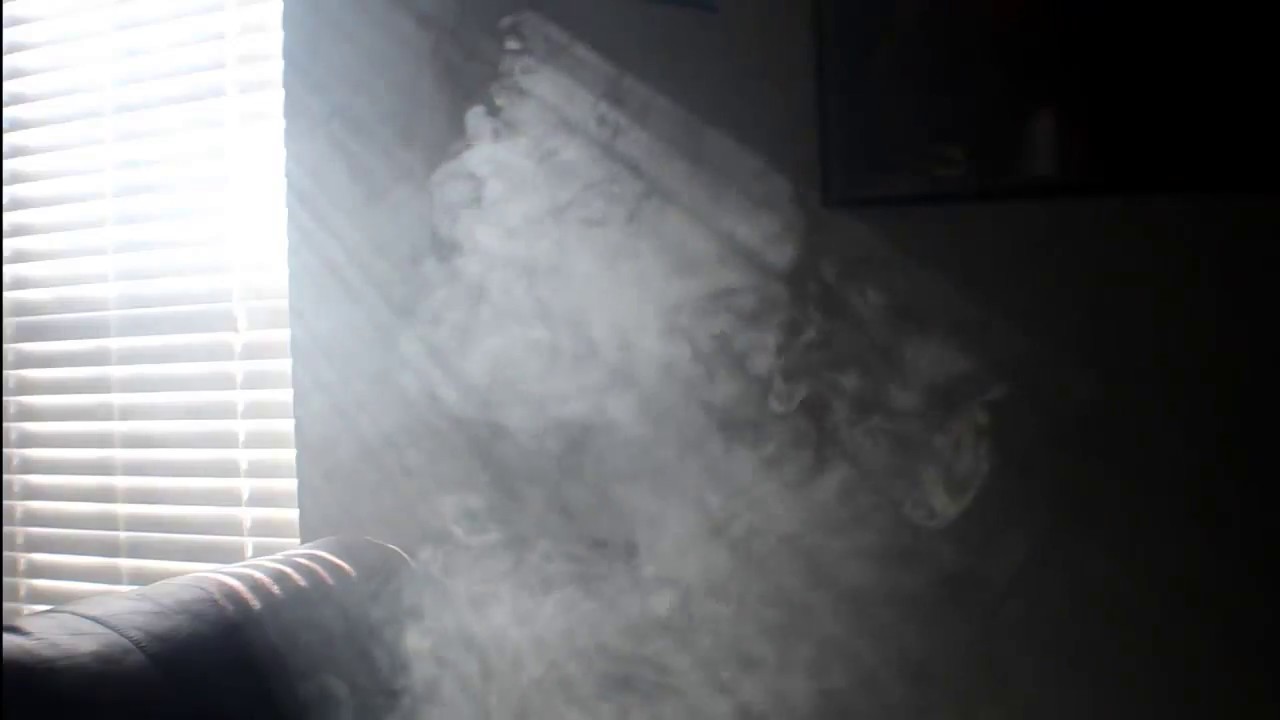 What is the size of particles in a colloidal solution?

The nanoparticles of a colloid are termed colloidal particles.

The average size of these particles is 1nm-1000nm. 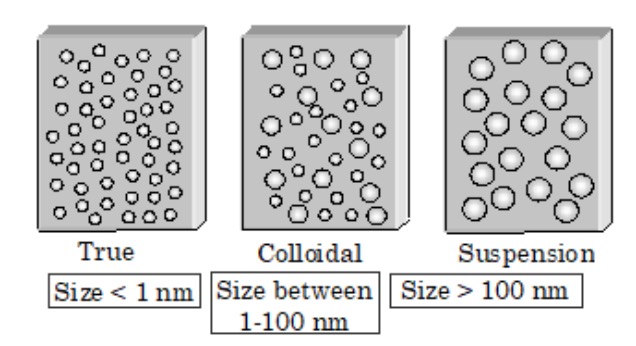 Is a colloid different in chemistry?

The definition of a colloid slightly changes in chemistry. In chemistry, a colloid is a fusion of two substances.

The first substance of microscopically dispersed soluble or insoluble particles is suspended through the second substance.

In this section, we will be discussing the different types of colloids.

Sol is a colloid formed of minute particles suspended in a liquid medium. Sols are stable substances and they showcase the Tyndall effect.

A colloid consisting of two or more heterogeneous liquids, in which one liquid contains the dispersion of various forms of liquids is referred to as an emulsion.

Examples of emulsions are egg yolk, butter, and mayonnaise. 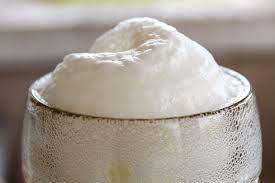 A colloid of dispersed gas particles in liquid or solid form is called foam.

Aerosol is a colloid formed with small particles of solid or liquid dispersed in gas form.

Examples of aerosol are dust, cigarette smoke, soot, or fumes in car exhaust. 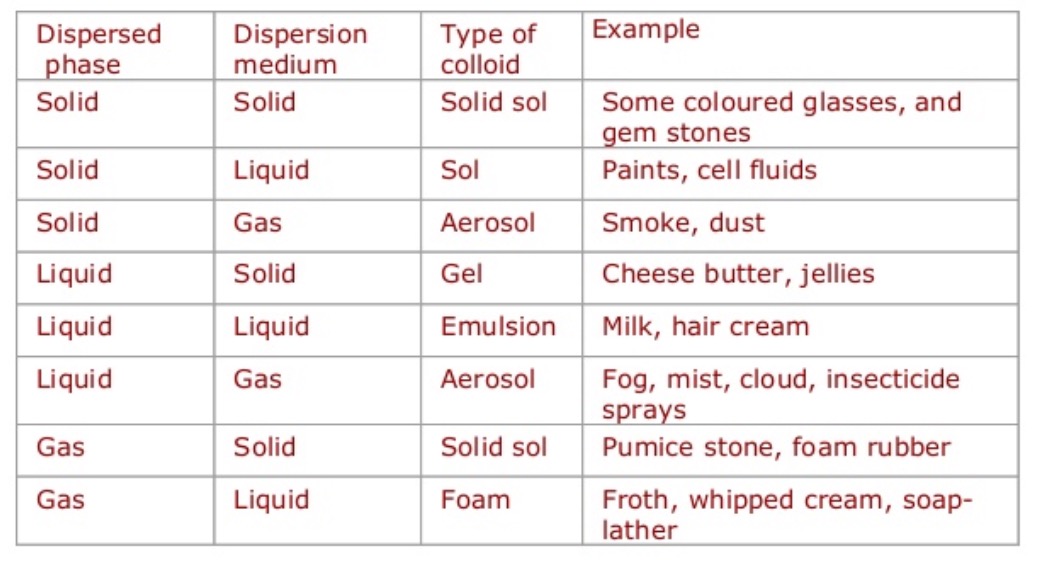 Difference between Suspension and Solution 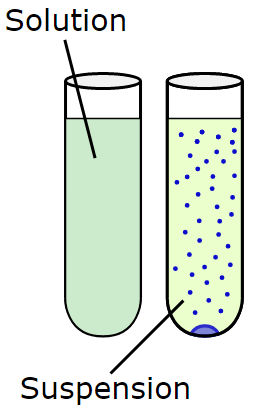 Suspension is a heterogeneous combination in which all particles are settled at the bottom, except for some that unsettle upon standing.

The suspension particles are large and hence can be pulled by the gravity of the medium used for dispersion.

You can use filtering in suspension to separate the dispersed particles.

These mixtures are heterogeneous because the various substances of a suspension don’t remain uniform if they are not stirred at short intervals.

The solution is a heterogeneous mixture like suspension. It is a liquid blend of two substances, solvent, and solute, uniformly distributed.

Other substances that are colloids

As we end this article, here are some of the most common, everyday substances that are colloids.

Is vinegar a colloid?

Vinegar is a solution which 5-8% acetic acid in water. It is a clear liquid solution, and light easily passes through it and never separates.

These small particles are small yet are much bigger when compared to particles in a solution. A common example of a solution is milk.

Is tea a colloid?

A blend falls into the category of a solution, colloid, or suspension only based on the size of its particles.

Tea is a good example of a colloid because it comprises a solvent, i.e., hot water and more than one solute such as honey, tea mix, milk, sugar, etc.

Is air a colloid?

Colloids are intermediaries between a suspension and a solution. A suspension clears out, but a colloid doesn’t.

When light passes through a colloidal dispersion, say smoky or foggy air, it is reflected by the larger particles, and the light beam is visible.

Is ketchup a colloid?

Ketchup is a colloid since it cannot be easily categorized into solid, liquid, or gas. As a matter of fact, ketchup is a sol, i.e., the solid particles suspended in a liquid.

Fun Fact: Colloid comes from the Greek word “glue,” which is a sol.

Is cheese a colloid?

Cheese and yogurts are nothing but complex colloidal suspensions made up of animal milk.

The colloidal suspension of milk can be defined as oil in water emulsion with insoluble proteins forming intricate micelles in a water solution.

Is blood a colloid?

Although blood is a colloidal solution, it partially behaves like a suspension. Blood also belongs to the list of non-Newtonian liquids.

Is milk a colloid?

Milk is a colloid and not a suspension, contrary to popular belief. The particles suspended in milk are tiny, so much that they don’t settle.

On the other hand, Suspensions are just mixtures of small particles suspended in continuous substances like air or water.

Is mayonnaise a colloid?

Egg yolk is an important ingredient of mayonnaise, and it contains lecithin, a fat emulsifier.

Emulsions are colloids from a chemical point of view.

They are heterogeneous blends of tiny particles suspended into another un-mixable substance.

Is marshmallow a colloid?

As mentioned earlier, a colloid is just a solution with tiny particles dispersed in liquid, gas, or a solid medium.

Since marshmallows contain tiny air bubbles dispersed in a solid coating of gelatin and sugar, they can be classified as colloids.

In this article, we discussed whether or not smoke is a colloid and what a colloid is.

Colloids are mixtures in which one substance is divided into minute particles and submerged into another substance.

Smoke is a colloid since it is made up of minute particles of solids, liquids, and gases.

We also talked about the origin, nature, and types of colloids later in the article.

Lastly, we listed some other common substances that we use in our daily lives: colloids, including marshmallows, milk, ketchup, mayonnaise, and more.