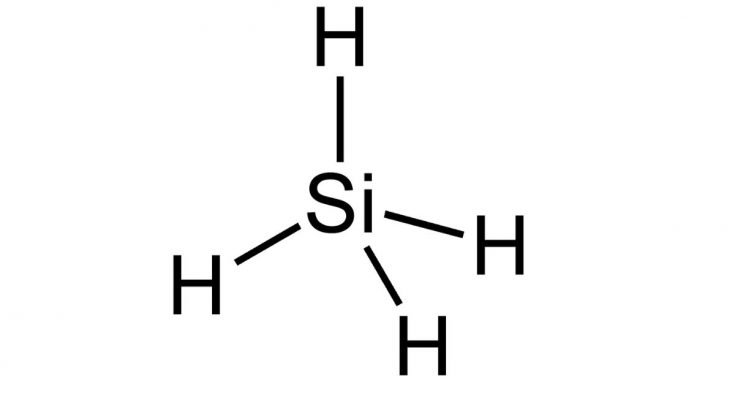 Silane also called silicon tetrahydride, is an inorganic compound with the chemical formula SiH4. It is a group 14 hydride. It has a sharp, repulsive odor that resembles acetic acid. As a precursor to elemental silicon, silane is of practical interest.

Many compounds with four substituents on silicon, including an organosilicon compound, are referred to as “silanes.”

Most of the students wonder if silane is polar or non-polar. In this blog, I will give you clear answers to this question and discuss some concepts about polarity and the factors affecting it.

So, is silane a polar or non-polar covalent compound? Let’s find out in the next section.

Well, that was a crisp answer. Now let me discuss the non-polar nature of Silane.

Why is SiH4 Nonpolar?

Before we dig into the details of covalent bonds in silane, let’s start from the basics. First, we need to go through the concept of electronegativity.

The degree to which an element can attract negatively charged electrons towards itself is known as electronegativity.

Since it is just a tendency it has no units. It’s used to determine whether a molecule is polar or non-polar and to describe polarity.

In the following sections, I’ll explain what characteristics distinguish a polar from a non-polar covalent bond.

The formation of a non-polar covalent bond takes place when two atoms share their electrons equally.

This type of bond is formed when atoms that share a covalent bond arrange themselves in such a way that their electric charges cancel each other out.

The difference in electronegativities of the bound atoms is normally very small in a non-polar covalent bond. It also implies that charge separation between the two atoms is nil. And, that their electronegativity is the same.

A nonpolar molecule will satisfy any of the following conditions:

1.Since all dipole moments cancel out, the net dipole moment is zero. This is true for many (but not all) symmetrical molecules.

2. All the atoms in that molecule have the same electronegativity.

When two atoms share electron pairs unequally, a polar covalent bond is formed. The molecules tend to have an electrical dipole moment as a result of this condition, with the two ends slightly positive or negative.

In the case of a polar bond, the electronegativity difference between bonded atoms is between 0.4 and 1.7 (approximately 2) on the Pauling scale.

In the case of SiH4, the electronegativity of Si and H are 1.9 and 2.2 respectively making Si-H a polar bond.

Factors affecting Polarity of a molecule

The polarity of a covalent bond is mainly dependent upon the below-mentioned factors:

Let’s look into each of these factors regarding Silane.

Effect of Electronegativity on Polarity of SiH4

There is 1 silicon atom with 4 hydrogen atoms surrounding it.

The primary step is checking whether the Si-H bonds are non-polar or polar covalent bonds. We’ll now examine the electronegativity values of both components.

Though the difference is small, it causes a slight polarity in the bond. Please note that we are talking about the individual Si-H bond and not the entire molecule.

A covalent bond’s polarity is measured by a physical quantity called Dipole moment (μ). The dipole moment is defined as the product of the charges and the distance separating them.

The unit of dipole moment is Debye (or) and is denoted by the symbol μ.

l: distance between the charges or bond length

e: charge of an electron

There are few important points related to dipole moment.

Dipole moments do not exist in non-polar molecules. In the case of symmetrical molecules, the molecular dipole moment comes out to be 0.

Dipole moment can be used to calculate the percentage of ionic character in a covalent bond.

Effect of Geometry on Polarity of SiH4

Hydrogen is in group 1 of the periodic table, which means it only has one electron in its outermost shell. 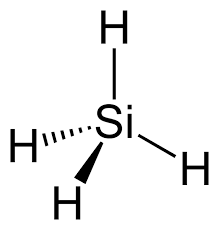 Silicon exists in sp3 hybridization. According to VSEPR theory, silane has a tetrahedral geometry with a bond angle of 109.5 degrees.

The bond length of Si-H comes out to be 1.4798 Å. Due to the symmetrical arrangement, the vector sum of the individual dipole moments becomes zero.

I have also written a detailed article on this. You must refer to SiH4 Lewis Structure, Geometry, Hybridization.

The net dipole moment of silane is zero and it is non-polar.

Silane can be considered as Methane’s silicon analog. Since hydrogen has a higher electronegativity than silicon, the polarity of the bond between silicon and hydrogen is the inverse of that of methane’s C–H bonds.

The higher tendency of silane to form complex compounds with transition metals is one of the outcomes of this reversed polarity.

It is very explosive and dangerous due to its flammable nature. It can lead to fatal accidents by ignition and combustion in case of leakages.

It’s much lighter than air and can irritate your skin and eyes. SiH4 is pyrophoric ie it burns spontaneously in the air without the need for an external ignition source.

Silane can be prepared in a variety of ways. It is usually manufactured by the reaction between hydrogen chloride and magnesium silicide:

It can also be manufactured from metallurgical grade silicon. This involves two steps. To make trichlorosilane, HSiCl3, silicon is first reacted with hydrogen chloride at about 300 °C, according to the chemical equation:

Silane also known as Monosilane or silicane is a group 14 hydride. It has a tetrahedral geometry with bonds arranged at 109.5 degrees.

Since it is symmetrical the dipole moments cancel and the compound is non-polar.

The basic concepts of covalent bonds and the polarity of silane were discussed in this article. In the comments section, please feel free to ask any questions you might have. We will give the answers as soon as possible.