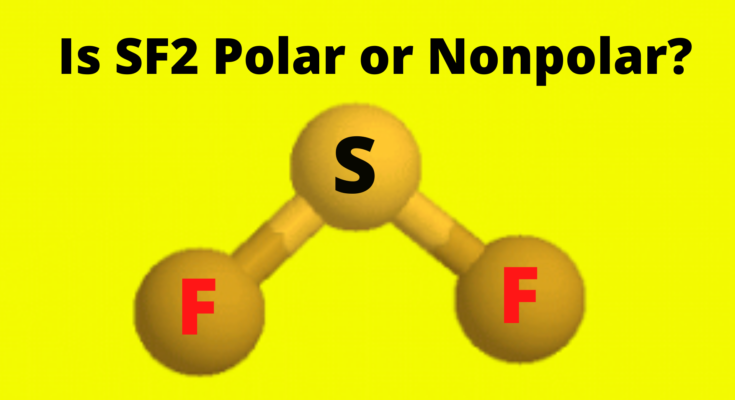 Sulfur difluoride is a molecule denoted by the chemical formula SF2. It is an inorganic compound that has a bond angle of 98 degrees between the three atoms F-S-F. It comprises two atoms of fluorine attached to one atom of sulfur.

So, Is SF2 polar or nonpolar? SF2 is polar in nature because the sulfur(2.58) and fluorine(3.98) atoms in the molecule differ in their electronegativity and the molecule has a bent geometrical shape. Therefore, the dipoles of the S-F bond do not cancel out each other and molecules turn out to be polar and contribute some dipole moment.

The polarity of the molecule results from the non-symmetrical sharing of the valence electron, creating a region of unequal charges in the molecule.

Contents show
Why is the SF2 Polar?
The hybridization of SF2
What is interesting about the SF2 bonding angle?
Polar versus Nonpolar Compounds
Factors that measure the polarity of a molecule
Molecular geometry of SF2?
Lewis structure of SF2
Structure of SF2
Sulfur Difluoride formation
Other Reactions of SF2
The formal charge on SF2
Properties of SF2
Conclusion

Why is the SF2 Polar?

There are two fluorine atoms on either side of the sulfur atom having 7 valence electrons in the outermost shell of the atom.

While the sulfur has 6 electrons in the outermost shell. Sulfur with one electron on either side forms a covalent bond with both of the fluorine atoms.

However, sulfur is left with two lone pairs of electrons on it while the fluorines have 3 lone pairs each. As we know the lone pair contributes to the molecule’s geometry, these lone pairs change the commonly assumed linear structure of the SF2 molecule to a great extent.

According to the Valence Shell Electron Repulsion Theory or VSEPR theory, the fluorines are going to spread out further and the linear structure is going to bend with the fluorine atoms bending down.

The two lone pairs of electrons are going to stay on the top of sulfur and both fluorine atoms in the downward direction resulting in a bent V shape.

The fluorine atom is more electronegative than the Sulfur atom due to which fluorine atoms pulls the shared bonded electrons slightly more towards its side and gains a partial negative charge.

Sulfur gains partial positive charge and both S-F bonds dipoles ads on to give a net dipole moment.

With this model, you can see that there are two opposite sides in the structure having opposite polarity. Hence, the molecule is not rendered symmetrical and the molecule gets polarity on it. Hence, SF2 is a polar molecule.

The hybridization of SF2

In SF2 the sulfur in the middle has SP3 hybridization. The orbitals on either side of the sulfur are 180 degrees apart from each other and the bond angle made between them is quite similar to that of water, it is 98 degrees.

What is interesting about the SF2 bonding angle?

SF2 is a polar molecule but its bonding angle is very interesting. The bond angle of SF2 is 98 degree and that of H2O is 104 degrees.

The reason for this fact is the presence of highly negative halogen fluorine. 2 fluorine atoms are present either side of the molecule.

Though in H2O the positive hydrogen atoms are more attracted to the lone pair.

A polar compound has two poles created across it having different polarities, while the non-polar compounds have no such region of polarity on them.

There are Van der Walls forces in nonpolar compounds while there is a Hydrogen bond in polar bonds.

Factors that measure the polarity of a molecule

Certain factors determine the polarity of the molecule, which are,

These lone players make the sulfur difluoride molecule have a small bond angle as per the VSEPR theory.

Below is the image of the geometry of SF2. 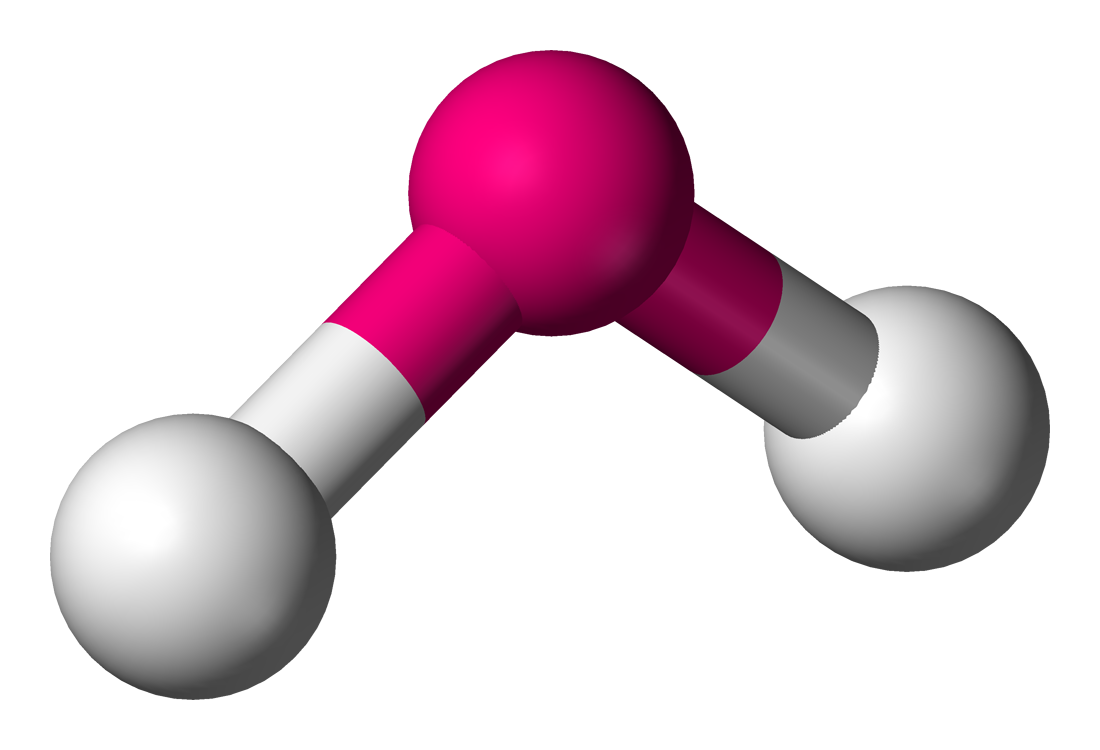 Lewis structure of sulfur difluoride is similar to other halogen compounds, sulphur has 6 electrons in the valence shell.

Fluorine has 7 valence electrons. Fluorine shares two electrons from sulfur and completes its octet. Thus, the single bond formed is a covalent bond. 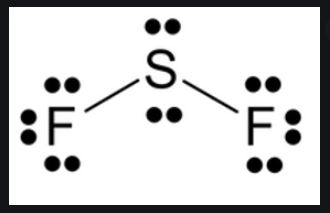 SF2 is a polar molecule with 3 atoms involved in the formation. The structure is of pattern SP3. Sulfur is positive but fluorine is highly negative, thus there is a bend in SF2.

The compound can be highly unstable and get decomposed on heating to FSSF. This is the unsymmetrical isomer of S2f4 and is proposed to rise via the insertion of sulfur difluoride into the S-F bond of the second molecule.

Another method of formation is by the reaction of oxygen difluoride and Hydrogen sulfide:

Other Reactions of SF2

The best synthesis of SF2 was found to be the gas-phase reaction of COS with F2. The chemistry is studied by performing various reactions with reagents.

By Condensation of SF2 with SF4 and SSF2 the new binary sulfur fluorides Sf3SF3 and SF3SSF are formed respectively.

Sulfur dioxide is decomposed on heating to form its unstable unsymmetrical FSSF3. This unstable molecule has many bond lengths thus is very unstable in reactions.

The sulfur fluorine bonds make this compound stable as a solid. It is also stable below -74 degrees Celcius in the liquid state.

The formal charge on SF2

The formal charge of any compound is calculated with the below formula,

In the structure of SF2, we can count all the required parameters and get to the answer to the question.

The bonded atoms in the compound are 4, two from sulfur, and one from each fluorine. Instead of calculating half the bonded electrons, you can also count the number of bonds in the atom and then use it in its place.

The unbonded electrons are 18.

Thus, according to the formula,

Therefore, the formal charge on SF2 is 0.

The compound is canonical and the heavy atom count on the compound is 3. SF2 is a bent V-shape molecule with a bond angle of 98 degrees and there exists a difference between fluorine and sulfur atoms of around 3.98-2.58 = 1.4. As a result, the polarity is generated across both S-F bonds and due to the bent shape of the molecule, both dipoles ads on to give a net dipole moment making it a polar molecule.

However, the compound is known to be highly unstable and decomposes quickly.