SCN- is an anion known by the name as Thiocyanate. Its systematic IUPAC name is Cyanosulfanide. It is considered as the conjugate base of the thiocyanic acid. Many students have a doubt regarding whether SCN- ion is polar or not. In this article, I will answer this and will cover its properties and its applications.

So, Is SCN Polar or Nonpolar? SCN ion is polar because of the unequal electronegativity of Sulfur(2.58), carbon(2.55), and Nitrogen(3.04). The Nitrogen being higher electronegative pulls the bonded electron towards its side and gains a partial negative charge making SCN a polar molecule.

Thiocyanate which is also known as rhodanide has the chemical formula as SCN-. Because of the negative charge intensity on the nitrogen, it acts as a base rather than likely to accept hydrogen atom.

The molecular mass of Thiocyanate is 58.08 g·mol−1. It is calculated as below

The chemical composition of this ion is covered by 1 sulfur, 1 carbon, and 1 nitrogen atom.

Being the least electronegative, the carbon atom becomes the central atom surrounded by sulfur and nitrogen atoms on both sides.

The Sulfur and Nitrogen atoms cover the Carbon atom such a way that the molecular shape of SCN- ion becomes linear.

The – sign shows the acceptance of one electron by sulfur to complete its octet and Carbon forms a single bond with sulfur.

Nitrogen forms a triple bond with carbon to stabilize itself and forms a stable anion [SCN]−.

As a result, Nitrogen pulls the bonded electron pair towards its side and gains a partial negative charge.

Apart from electronegativity, it is also linked with carbon via a triple covalent bond due to which the negative charge intensity on nitrogen increases.

The two poles (positive and negative) are generated within a molecule due to which polarity rises across it.

Contents show
Polar vs Nonpolar Molecules
Why is SCN Nonpolar in nature?
Lewis structure and Geometrical Structure of SCN-
Key Points to check the polarity
Properties of SCN
Uses of SCN
Conclusion

The molecules are bind by the forces among its atomic. These forces are of several types like covalent, ionic, metallic bonds, etc.

The Molecules that have Polarity across it are said to be polar. These molecules have positive and negative poles generated due to the imbalance distribution of charge.

The dipole moment of such molecules is always non zero. The charge distribution on its atoms is unequal.

The atoms in polar molecules usually have an unequal value of their electronegativity. Some of the examples of polar molecules are HCN, SO2, etc. You can check out the reason for the polarity of HCN.

On the other hand, the nonpolar molecules have no poles generated across it because charge distribution in these molecules is uniform.

The bond formed by two atoms is said to be non-polar if their electronegativity is equal. In addition to this, these molecules have symmetric geometrical shapes.

The examples of nonpolar molecules are Hexane, SO3. You can check out the reason for the non-polarity of SO3.

Why is SCN Nonpolar in nature?

SCN- ion consists of 1 sulfur, 1 carbon, and 1 nitrogen atom. The molecule has a single bond between sulfur and carbon having negative – charge on sulfur as it accepts one electron to complete its octet.

And Nitrogen and carbon form a triple bond to share their three electrons to complete their octet. The ion becomes stable with this electronic configuration.

Being higher electronegative, Nitrogen atom pulls the bonded electron pair slightly more towards its own side and gains relative negative charge and leaves a positive charge on other atoms.

Apart from the difference between electronegativity, the nitrogen is associated with carbon with a triple bond due to which there is a greater intensity of charge on the nitrogen atom.

Because of the above reasons, the SCN- molecule turns out to be polar.

Lewis structure of a molecule depicts its electronic configuration. The number of valence electrons of SCN is 16.

The formal charge on SCN is -1

The geometrical shape of the molecule is linear with sulfur and nitrogen at both ends.

Below is the image of the geometrical structure of SCN- ion. 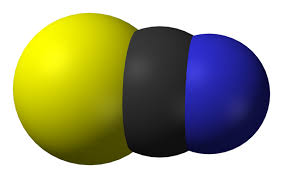 Key Points to check the polarity

In order to check whether a molecule is polar or not, we should list down the below parameters and observe them.

Therefore if there is a difference between the electronegativity of atoms forming a covalent bond, it ensures the polarity across it.

Higher electronegative atom pulls the electrons to its side and becomes a negative pole in a polar molecule.

It is denoted by D. It is the product of the charge on atoms and the distance between the centers of negative and positive charges.

Geometrical shape: In most cases, the shape of a molecule easily determines whether a molecule is polar or nonpolar.

It is generally seen that distorted or asymmetric shaped molecules tend to be polar in nature because they have an uneven distribution of charge across it.

On the other hand, symmetric molecules are polar in nature.

Thiocyanic ion consists of 1 carbon, 1 sulfur, and 1 nitrogen atom. The electronegativity of the Nitrogen atom is highest among other atoms in the SCN molecule.

Being higher electronegative, it pulls bonded electron pair slightly more towards its side and gains partial negative charge and leaving positive charge on other atoms.

Apart from electronegativity, the Nitrogen atom is also associated with triple bonds with carbon atom due to which the charge intensity on nitrogen atom increases and it becomes the negative pole and makes the SCN polar in nature.