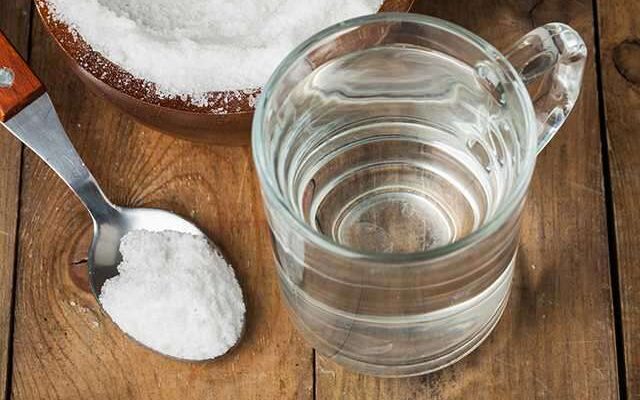 Saltwater consists of salt and water. Saltwater or saline water is extensively found in the seas, oceans, and some lagoons. The salinity of seawater is about 35,000 ppm.

Many students doubt if saltwater is a compound. In this blog, let me clear all your doubts and explain to you what exactly is saltwater.

So, is saltwater a compound? No, salt water is not a compound, rather it is a homogeneous mixture of Sodium Chloride ions and water. To be more precise, we can call it to be a solution. When salt is added to water and mixed, no new compound is formed. Sodium chloride splits up into its constituent ions ie, Na+ and Cl-.

They are then surrounded by water molecules. When this happens salt is said to be dissolved in water and a homogeneous salt solution results.

Now, let me explain to you the concept of dissolution and mixtures. Before that, we will discuss atoms, molecules, and compounds which are the most fundamental aspects of chemistry.

Contents show
Atoms, Molecules, and Compounds
Molecules
Classification of Matter
Elements
Compounds
Law of Definite Proportions
Mixture
Properties of a Mixture
Types of Mixtures
What is a Solution?
Aqueous Solutions
Non-aqueous solutions
Properties of Solutions
Why salt water is a mixture, not a compound?
Dissolution of Salt
Conclusion

An atom is the building block of all the matter that exists in the universe. It is the smallest unit into which matter can be split without releasing charged particles.

It’s also the smallest unit of matter which has the same characteristics as a chemical element. As a result, the atom is the fundamental unit of chemistry.

Atoms combine to form molecules. A molecule is a group of two or more atoms that are chemically bonded.

All matter found in the Universe can be classified into three categories. They are:

Let me explain each of these in detail with their properties.

An element consists of atoms of the same atomic number. It means that all the atoms in an element have the same number of protons in their nucleus.

An element cannot be further split into simpler molecules by chemical means.

Compounds can be defined as the product obtained by the chemical combination of two or more elements in a definite proportion by mass.

There are two kinds of compounds:

Covalent bonds are used to hold the atoms together in molecular molecules. In the case of salts, they are held by ionic bonding.

Can you identify which of the above-mentioned compounds are salts and molecular compounds respectively? Just give it a try.

All compounds obey the Law of Definite Proportions. Let’s see what the law says.

The law of definite proportion also called Proust’s law, or the law of constant composition states that “a given chemical compound always contains its component elements in a fixed ratio by mass and does not depend on its method of preparation and source.”

Let me explain this law with the help of water. Water is a compound formed from 2 atoms of hydrogen and 1 oxygen atom.

The molecular mass of water is 18g out of which oxygen accounts for the 16g and hydrogen for the remaining 2g. It can be seen that hydrogen and oxygen combined in a fixed ratio of 2:1.

Water can be formed only if 2 hydrogen atoms combine with 1 oxygen atom. Instead of 1 atom, if it combines with two oxygen atoms, we get a different compound called hydrogen peroxide or H2O2.

Even if we take water from different sources, it would have the same molecular mass with 2 hydrogen atoms and 1 oxygen atom.

When elements combine to form compounds, they lose their individual properties and the newly formed compound has properties entirely different from its constituent elements.

Let me elaborate this statement with an example for your better understanding.

Surprisingly, the compound formed from oxygen and hydrogen, that is water, extinguishes fire. It doesn’t support combustion at all.

I hope it is clear from this example that compounds are entirely different in behavior from the elements it is formed.

When two or more chemicals combine without undergoing a chemical change, the product obtained is a mixture.

The elements or substances that mix to form a mixture retain their individual properties since there is no chemical combination.

Chemical ingredients such as elements and compounds are mechanically blended or mixed to produce mixtures.

Properties of a Mixture

The following is a list of properties of a mixture:

A mixture can be homogeneous or heterogeneous.

Homogeneous Mixtures – The mixtures which have uniform properties along their entire mass are called homogeneous mixtures.

Heterogeneous Mixtures – The mixtures which have varying properties along their entire mass are called heterogeneous mixtures.

What is a Solution?

Based on whether the solvent is water or some other substance solution can be classified into:

If a solute is dissolved in water to form a solution, it is referred to as an aqueous solution.

In a non-aqueous solution, the solute is dissolved in any other type of solvent except water. The solvent can be ether, hexane, oil, etc.

Why salt water is a mixture, not a compound?

Saltwater is a homogeneous solution comprising of two different compounds namely sodium chloride and water. Unlike a compound that has strong chemical bonds, there is no chemical bonding between water and salt molecules in saltwater.

In a compound, the properties of constituent atoms are lost. In the case of saltwater, it is not so. The salt still has its salty taste and water remains in a liquid state itself.

Also, saltwater taken from different sources can have different concentrations of salt. There is no formation of a new pure substance on dissolution.

All these are possible only because salt water is a mixture and not a compound.

All the salts are ionic compounds. They have an ionic bond formed via the transfer of electrons. Chloride and sodium ions have an electrical charge—the chloride ion has a negative charge, whereas the sodium ion has a positive charge.

You can check our article on covalent bonding in water.

Since the water’s covalent bonds are stronger than the salt molecules’ ionic bonds, water can pull apart the Na+ and Cl- ions. The ionic link that holds the sodium and chloride ions together is broken.

The sodium and chloride atoms get surrounded by the water molecules. After this, salt is dissolved, which results in a salt solution or salt water.

Saltwater is not a compound but a mixture. In this article, we have seen the classification of matter and its properties in detail. We also saw what properties make salt water a mixture. In case of any queries please ask in the comments section. We will try to answer at the earliest.