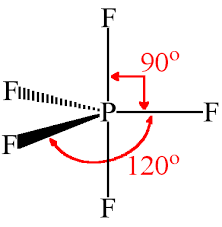 The chemical compound PF5 is also known as Phosphorus Pentafluoride. It is one of the most essential phosphorus halides. PF5 is a  colorless gas toxic in nature and form fumes in the air. It is very dangerous for the eyes and also causes sickness on inhalation. In this article, we will check out the answer to whether PF5 is a polar or nonpolar compound.

So, is PF5 polar or nonpolar? Phosphorus pentafluoride or PF5 is a nonpolar compound because of its symmetrical geometry ie; Trigonal Bipyramidal. Although the P-F bond is polar as the F atom is more electronegative than the P atom, the entire PF5 molecule is nonpolar because the dipole of the P-F bond gets canceled out by each other resulting in the zero net dipole moment making it a nonpolar molecule.

It exists as a compound with an irritating odor and forms highly toxic fumes in the air. It violently reacts when the hydrolysis reaction takes place.

PF5 is highly reactive to water by nature and forms phosphoric and hydrofluoric acid, phosphoric acid as an outcome of an exothermic reaction producing heat.

This PF5 compound can be easily obtained by fluorination of phosphorus pentachloride with the help of arsenic trifluoride.

PF5 can also be synthesized by the process of fluorination of PCl3 with anhydrous hydrofluoric acid with the presence of Chlorine. This process ensures a high PF5 conversation rate.

Why PF5 is nonpolar?

The electron pull balances out electronegativity, in both the vertical and horizontal axis of the Phosphorous Pentafluoride molecule.

One of the axis of the PF5 molecule falls to be linear while the other one forms a triangular shape which results in a no net dipole moment.

The molecule carries no dipole charge because of the cancellation of the dipole moment generated by each P-F bond.

The molecular geometry of Phosphorous Pentafluoride (PF5 ) is trigonal bipyramidal.

PF5 has symmetric charge distribution of Fluorine atoms around the central atom Phosphorous.

As charge distribution is equal and there is no net dipole moment therefore, this molecule is nonpolar.

Although the P-F bond is polar in nature due to differences in their electronegativity, the dipole of P-F bonds gets canceled out by each other due to the symmetric structure of the entire PF5 molecule.

Points to determine the polarity of PF5

Generally, a nonpolar molecule has the bonds sharing equal electronegativity in participating atoms.

Though if atoms are arranged such that polar bonds vector sum cancels out itself then also a molecule becomes nonpolar.

Here, in PF5 the bonds are symmetric but due to the electronegativity of fluorine being higher than phosphorus atom, the molecule has polar bonds canceling their vector sum.

This cancellation is responsible for nonpolar nature as there is no dipole moment and lone pair of electrons.

Due to this, PF5 forms a trigonal bipyramidal geometry consisting of a pair of equatorial and axial bonds.

As these horizontal and vertical bonds cancel out their charges, the molecule has no net charge.

Due to no net charge, the whole molecule has a nonpolar nature forming polar covalent bonds.

If we see the lewis structure of this molecule! 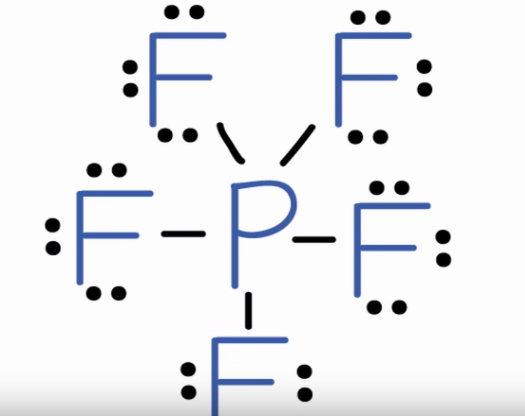 In PF5, the Phosphorus atom contains a total of 5 valence electrons and fluorine has 7 electrons in its outermost shell. One electron is shared by each fluorine atom to complete its octet.

The elements present in the third period comprise of d orbitals along with s and p orbitals in the periodic table.

It is prominent that all bond angles of 90 degrees and 120 degrees formed in trigonal bipyramidal geometry are not identical.

So, the 5 sp3d orbitals of phosphorus overlap with the p orbitals of fluorine atoms. These p orbitals are singularly occupied and together they form all the 5 P–F sigma bonds in PF5.

Hence, the PF5 molecule has a sp3d hybridization and a trigonal bipyramidal geometry shape.

The Dipole moment of Phosphorus Pentafluoride

Thus, the P-F bond is polar in nature.

The polarity of the P-F polar bonds cancels out each other due to the trigonal bipyramidal geometry of the molecule.

Since the molecule Phosphorus Pentafluoride (PF5) is symmetrically arranged around the central (P) atom, there is no charge distributed unevenly.

CBr4 (Carbon tetrabromide) is also a similar compound having polar C-Br bonds with some dipole moment value but the entire molecule is nonpolar because of the net-zero dipole.

Check out the article regarding the polarity of CBr4.

Why PF5 is nonpolar even with an odd number of vectors around the central atom?

This is because of the 3-dimensional arrangement (i.e. Ball and stick diagram) of PF5.

We know that F is more electronegative than P, therefore the bonds formed in PF5 are polar, but the molecule as overall is nonpolar. Why?

Due to the arrangement of F atoms in PF5 such that it forms a trigonal bipyramidal molecular geometry where electrons are shared equally.

Thus, no dipole charge is produced and hence the Compound PF5 is nonpolar even with an odd number of vectors.

One such element with an odd number of vectors around a central atom is BCl3 that also lies under the category of the nonpolar compound.

Read out the article for the polarity of BCl3.

Below is the image of the PF5 Ball and Stick Model 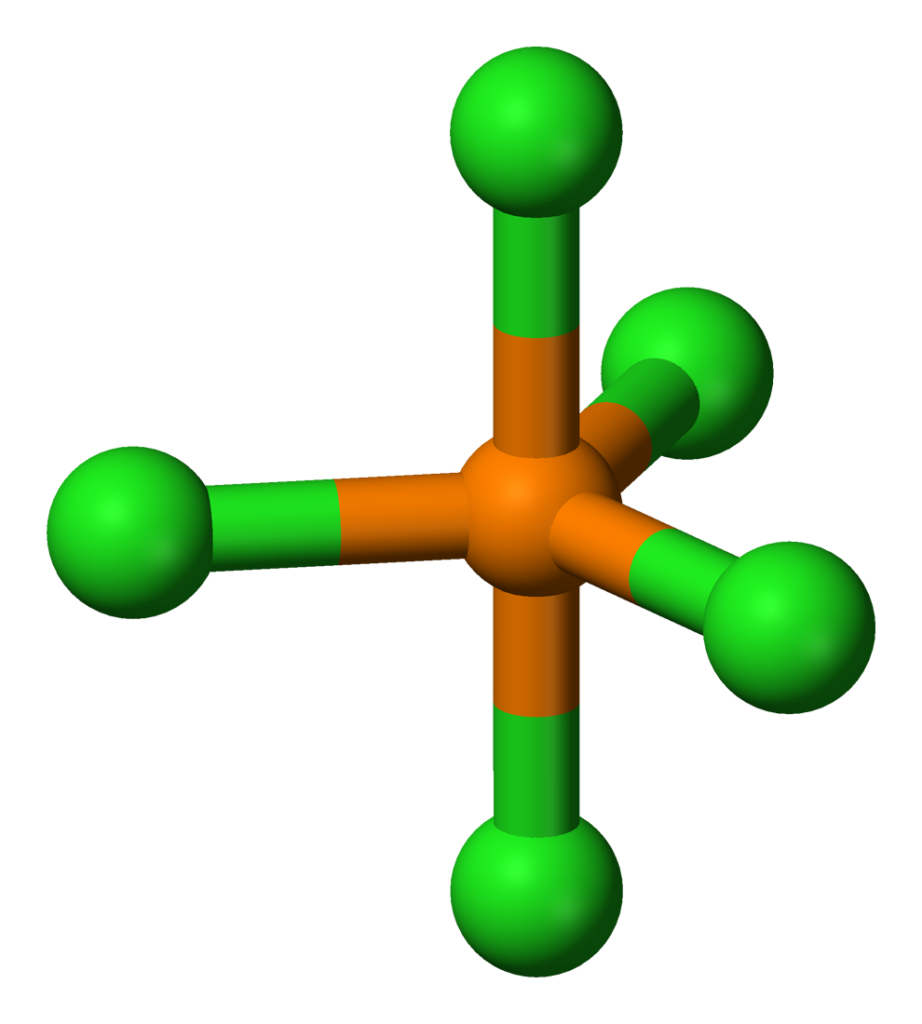 Why does PF5 exist as gas (covalent) whereas PCl5 exists as ionic solid?

In both the molecules, Phosphorus is a common atom but both compounds differ in the halogen.

Chlorine and fluorine have the same valence electrons but the size of the fluorine atom is smaller as compared to chlorine.

As a result, the electron density in fluorine is more than chlorine due to which PCl5 has a lower polarizing factor resulting in a more ionic character.

Whereas fluorine being a smaller-sized atom has more electron density brings out a more polarising nature and more covalent character and it exists in gaseous form.

Why PF5 is called a dangerous or toxic substance?

This colorless Phosphorus Pentafluoride is considered to be an incredibly dangerous substance, due to its violent reactivity with water.

Hence, Phosphorus Pentafluoride (PF5) should be stored in sealed steel cylinders to avoid its contact with water or even humidity.

If the substance gets in contact with water, an exothermic reaction takes place producing poisonous fumes and sufficient heat to burn any combustible substance.

Hence, it is a dangerous compound that reacts violently to hydrolysis.

Phosphorus Pentafluoride is used as a fluorinating agent used in various industrial chemical reactions. The compound is nonpolar in nature because of the symmetric geometrical structure. All the five fluorine atoms lie symmetric to the central phosphorus atom. It is toxic to inhale. PF5 has zero dipole moment.  It is a completely nonpolar compound forming polar covalent bonds.