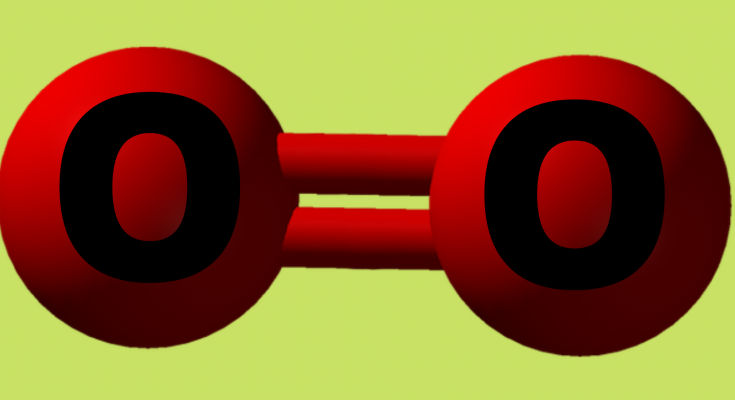 O2 is the molecular formula of oxygen, a well-known diatomic molecule responsible for the existence of flora and fauna on the earth. As we know the nascent oxygen (O) is a highly unstable atom, it exists in the double atom state.

The balance of oxygen is maintained because it is exhaled by plants and inhaled by human beings and animals. Moreover, oxygen is also an important part of various atmospheric cycles on the earth.

In addition to this, we also know O2 is the main component of the ozone layer which is present in the stratosphere and protects the earth from harmful radiations of the sun.

Oxygen is a colorless, tasteless, and odorless gas that is usually purified with the help of fractional distillation of the liquefied air. Also, oxygen in liquid and solid form is pale blue in color which changes to orange, black, or red at low temperature and very high pressure.

Moreover, the oxygen molecule never catches fire and is not flammable being a strong oxidizer. As it is such an important molecule, we need to study its molecular structure and bonding behavior. With this let’s answer the question:

So, Is O2 ionic or covalent? O2 is a covalent molecule because each oxygen atom needs two valence electrons to complete its octet. To meet this need, each oxygen atom shares two of its electrons with the other oxygen forming a strong oxygen-oxygen double shared covalent bond.

Contents show
What are ionic and covalent bonds?
Why oxygen is a covalent molecule?
Does the oxygen molecule have a polar or nonpolar covalent bond?
What factors affect covalent bonds?
Are all diatomic molecules covalently bonded?
Conclusion

What are ionic and covalent bonds?

Here, it is important to know that only a shared covalent bond is formed in the molecule having two similar atoms.

The covalent bond is directional and present in all three states of matter – solid, liquid, and gas. Due to this, molecules having covalent bonds show properties of hybridization, molecular orbital diagram, and polarity.

On the other hand, ionic bonds are non-directional for which the properties shown by covalent molecules do not hold any validity. This is a major reason why ionic bonding is only applicable to the solid-state.

Why oxygen is a covalent molecule?

Here, it is important to know that the lesser the number of valence electrons required, the higher will be the tendency to accept them, and vice versa.

From the aforementioned Lewis structure, it is clear that oxygen atoms are attached to one another with the help of a shared covalent bond.

Moreover, the double bond forming between two oxygen atoms consists of one sigma bond and one pi bond providing the stability to the oxygen molecule.

Here, it is crucial to understand that the oxygen molecule has a low melting point which does not affect the sigma covalent bond but the pi covalent bond. 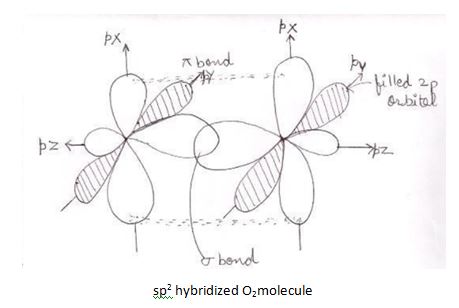 Does the oxygen molecule have a polar or nonpolar covalent bond?

Polar covalent bonds are those where the difference in electronegativity values exists. This difference creates an overall net dipole moment on the molecule by which separation of electric charges occurs, making two separates positively and negatively charged ends.

Whereas, on the other hand, nonpolar molecules are exactly opposite where no difference in electronegativity values exists creating the net dipole moment zero.

With this, no separation of electric charges occurs and there exists the least force of attraction between the atoms in comparison to the polar molecules.

By the aforementioned definition, the oxygen molecule is nonpolar in nature because both the molecules within the atom are the same. This means there is no difference in electronegativity values making the molecule nonpolar.

These can be electron affinity, atomic size, ionization energy, and electronegativity.

This is the reason why oxygen is a strong oxidizing agent as it accepts the valence electrons and reduces the other atom.

2. Ionization energy is another property that is responsible for the oxygen forming a covalent bond. This property is defined by the minimum amount of energy needed to excite the most available valence electrons in order to initiate the bond formation.

To produce a strong covalent bond, both the participating atoms need to have high ionization energy which is the case of the oxygen atom.

3. In alignment with this, atomic size is another property that promotes the formation of a strong covalent bond. When it comes to forming covalent bonds between the two atoms, we need to find the covalent radius to figure out how far the participating valence electrons of both the atoms, are from one another.

In the case of forming a covalent radius for each atom, it will be half of the distance between the two nuclei. It is so because the equal number of valence electrons are participating and present at an equal distance from one another along with the equal force of attraction on the other atom.

With this, the smaller the size of an atom, the less reactive it will be and will be closer to the positively charged nucleus.

Due to this, it becomes tough for the valence electrons to easily bond with other electrons preferring shared format, that is, covalent bond.

4. Last but not least, comes electronegativity which is the ability of an atom to attract shared pair of valence electrons towards itself.

By definition, it is clear that electronegativity is directly proportional to the atomic size. In order to form a covalent bond, the electronegativity value of the participating atoms must be high while the difference must be low which will make the molecule nonpolar.

Are all diatomic molecules covalently bonded?

The diatomic molecules can be homonuclear or heteronuclear and will be covalently bonded. In the case of homonuclear molecules, the valence electrons will be equally shared having zero electronegativity difference, forming a nonpolar covalent bond.

Whereas in the case of heteronuclear molecules, there will be some electronegativity difference, so they will form a polar covalent bond.

Here, some people can think sodium chloride (NaCl) being a diatomic molecule is not covalently bonded. It is important to understand that sodium chloride is formed because of ionization.

The oxygen molecule is covalently bonded where an equal number of valence electrons are shared by both the atoms. It can be studied very well with the help of the Lewis structure that says a double covalent bond exists between the oxygen atoms. The sigma bond of this double bond is responsible for providing a strong stable structure to the molecule.

Whereas, the weak or incongruent behavior is mainly showed due to the bonding done by the pi bond. As a single oxygen atom needs two valence electrons to complete its octet, it is easier for the atom to donate than accept.

This is the reason why sharing of valence electrons occurs between the participating two oxygen atoms to produce one oxygen molecule.