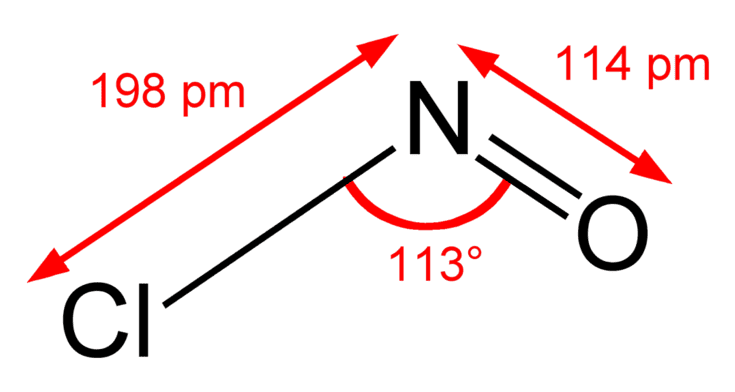 NOCl or Nitrosyl Chloride is a toxic chemical compound that exists as a yellow colored gaseous compound. This gas is mostly released upon the decomposition of aqua regia. Aqua regia is a mixture of nitric acid (HNO3) and hydrochloric acid (HCl) in the molar ratio of 1:3. Nitrosyl chloride is also known as Tilden’s reagent.

Is NOCl polar or non-polar? NOCl is a polar molecule because the central nitrogen atom in the structure of NOCl has a lone pair of electrons present on it, which results in electron-electron repulsion. This leads to bending in the structure in V-shape, making it asymmetrical. Also, due to the unequal sharing of a charge, a dipole moment of about 1.9 D develops making it a polar molecule.

The molecular mass of NOCl is 65.459 g mol−1 with sp2 hybridization.  It is a strong oxidizing agent and also an electrophile.

In gaseous state, the density of this substance is around 2.872 mg mL−1.

How to Distinguish Polar and Non-Polar Molecules

Polar and non-polar molecules are differentiated according to a number of factors. The differences between these two types of molecules can be tabulated as follows:

The above table gives an idea of the basis according to which polar and non-polar molecules majorly differ. Having an idea of the classification makes it easier to decide whether a given compound is polar or not.

Why is NOCl a polar molecule?

The Nitrosyl chloride structure is typically a little bent towards the inside. The bond length of the single N–Cl bond is 198pm, and that of the double N=O bond is 114pm. The bong angle is equal to 113°.

Due to the presence of lone pair on the Nitrogen atom, there is electron-electron repulsion, which shoves the bonds, leading to a bent structure.

This asymmetrical charge distribution on the central atom distorts the symmetry of the molecule and leads to the origination of a dipole moment.

This leads to a strong pull of the electron pair on both sides (because both the elements are highly electrophile), altering the otherwise straight bond.

Below is the geometrical shape of the NOCl molecule 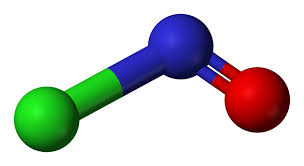 Due to the electron-electron repugnance, the molecular structure of NOCl is a bowed down, by an angle of 113°.

Subsequently, the polarity of the whole Nitrosyl chloride (NOCl) compound still exists but the overall strength of the dipole moment is somewhat diminished owing to the bending of the bonds.

The dipole moment of a compound is the measure of its polarity.

Mathematically, it is defined as the product of charges of two atoms forming a covalent polar bond and the distance between them.

Lewis structure of a compound shows the arrangement of the electrons around the atoms participating in the bond formation in its molecule.

Nitrogen is the least electronegative element out of the three atoms and takes up the center position in the Lewis structure.

The formal charge on each atom should be maintained as zero.

The nitrogen forms a double bond with oxygen and a single bond with chlorine leaving behind a lone pair on itself as shown below.

Below is the image of the lewis structure of NOCl. 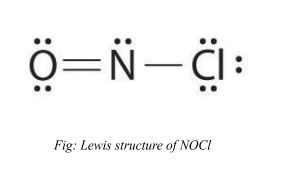 If still have doubt, go and check out the detailed steps of drawing the lewis structure of NOCl.

NOCl comprises of mainly three elements – Nitrogen, Chlorine, and Oxygen. While deciding the bonding in NOCl, Nitrogen will always be placed in the center because it is the least electronegative element.

Nitrosyl chloride is simple in chemical terms and a thermally stable compound. The production and synthesis of NOCl can occur in a number of ways:

In most of the chemical reactions, NOCl comes across as an electrophile (electron pair acceptor) and an oxidant.

The following reactions can be used to explain this acceptor nature of Nitrosyl chloride: 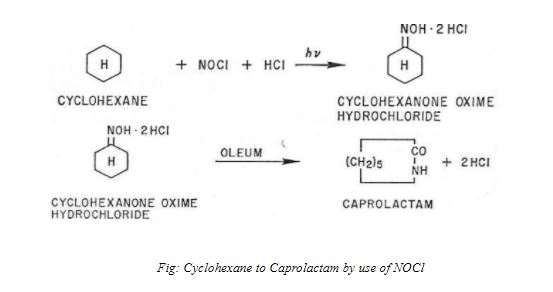 The atoms in the NOCl molecule differ in their electronegativity as Oxygen and Chlorine atoms are more electronegative than Nitrogen due to which the positive and negative charges are separated. The molecule has a bent V-Shape structure due to which the charge distribution on its atoms is non-uniform and net dipole moment rises across the molecule.

The overall dipole moment of the NOCl molecule is 1.9 D making it a polar molecule.