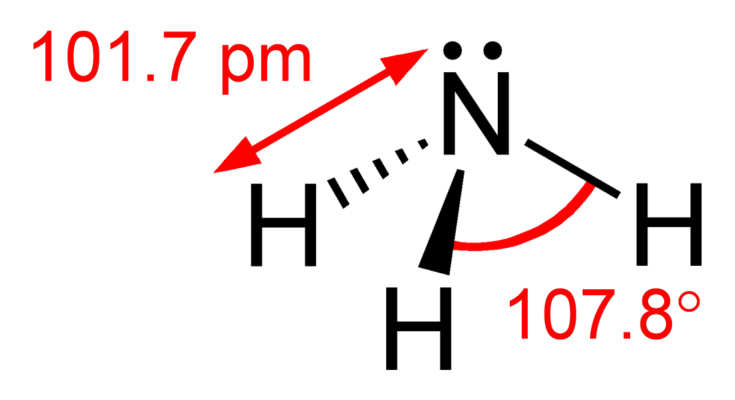 Ammonia is a pungent-smelling and colorless gas compound known by the chemical formula NH3 ie; having 3 molecules of hydrogen atoms and one nitrogen atom.

At room temperature, it exists in the gaseous state and boils at -33 degrees Celsius. Many students wonder whether ammonia is polar or nonpolar. In this article, I will answer this question and cover the surrounding topics too.

So, Is NH3 polar or nonpolar? Yes, NH3 (Ammonia) molecule is polar in nature because of its asymmetrical shape ie; trigonal pyramidal structure, and the difference in electronegativities of N(3.04) and H(2.2). The charges over the nitrogen and hydrogen atoms are unequally distributed which results in a net dipole moment making NH3 (Ammonia) a polar molecule.

Ammonia is a pungent-smelling gas that originates from vegetable matter and nitrogenous animal waste products. The atmosphere contains around 15% of the air in the form of ammonia gas.

During rain, ammonia and ammonium salts can be checked in small quantities in rainwater.

Apart from our atmosphere, ammonia is found throughout our solar system including planets like Uranus, Jupiter, Neptune, etc. Jupiter is a giant planet that also consists of ammonia crystals on its surface.

Ammonia is also present in our body. It should be known that our kidney releases ammonia to neutralize the excessive acid content in our body to balance the system.

A German patent Fritz Haber discovered the ammonia gas in the year 1908 by a Haber–Bosch process for which he was awarded a Nobel prize in 1918. It was known to be a highly usable form of nitrogen.

The type of chemical bonds in ammonia are covalent. Nitrogen forms a covalent bond with three atoms of hydrogen.

In a molecule of NH3, the nitrogen atom has 5 valence electrons present in its outermost shell, and hydrogen contains 1 valence shell.

Contents show
What are Polar and Nonpolar Molecules?
Why is NH3 a polar molecule?
NH3 Molecular Structure
Factors that determine the polarity
Conclusion

The two most common and strong bonds are ionic and covalent.

1. Ionic bond: These bonds are formed when two atoms having opposite charges on them combine to form a molecule.

In this, two oppositely charged atoms stabilize each other. These types of bonds are usually for when there is an appreciable difference in electronegativities of two atoms. Complete transfer of electrons takes place in such bondings.

2. Covalent bond: These bonds are formed when two or more atoms share their electrons with each other to stabilize each other.

Note: When two atoms form a covalent bond, electron density also changes on those atoms. When there is an unequal charge distribution over two atoms forming a bond, then the bond is said to be polar.

In such a case, a partial ionic charge increases on one of the atoms.

This happens more specifically when there is a large difference in electronegativity of both atoms.

Therefore, the formation of partial ionic charge occurs resulting in one atom being charged highly negative and another atom highly positive.

And when the atoms forming a covalent bond with symmetry and equal ionic charge on both atoms, the molecule formed is known as a nonpolar molecule.

The non-polar bond is formed when the electronegativities of both atoms are the same.

Why is NH3 a polar molecule? 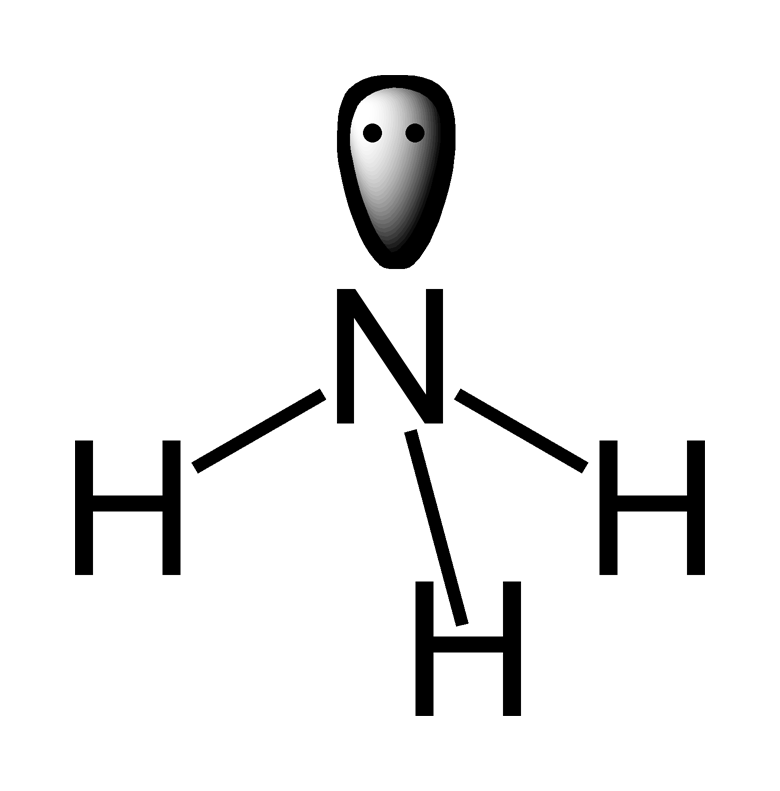 NH3 is a polar molecule because, in the NH3 molecule, it has three dipoles because of three bonds and these dipoles do not cancel out each other. They form a net dipole moment.

In Ammonia molecules three atoms of hydrogen form a covalent bond by sharing 3 electrons of nitrogen and hydrogen atoms leaving behind one lone pair on the nitrogen atom.

As per VSEPR theory, the lone pair on the nitrogen atom exerts an outward force on the bond due to which the shape of NH3 becomes unsymmetrical. Lone pair-bond pair repulsion drives this force on the bonds.

And the calculated electronegativity of Nitrogen is 3.04 and of hydrogen is 2.2. Therefore, the difference in their electronegativities causes three dipole moments from the three N-H bonds in one direction.

The three dipoles in one direction form a net dipole moment that determines the NH3 polar molecule.

In the N-H bond, Nitrogen being more electronegative pulls the electron pair slightly towards itself and becomes partially negatively charged.

Ammonia gas is highly soluble in water forming ammonium ions and it should be noted that polar molecules get more easily mixed with another polar molecule.

And as we know that water is also a polar molecule. Therefore ammonia and water attract each other and get easily mixed.

It is important to know the fact that apart from this polarity factor, they have an extra booster of attraction that is known as hydrogen bonding. 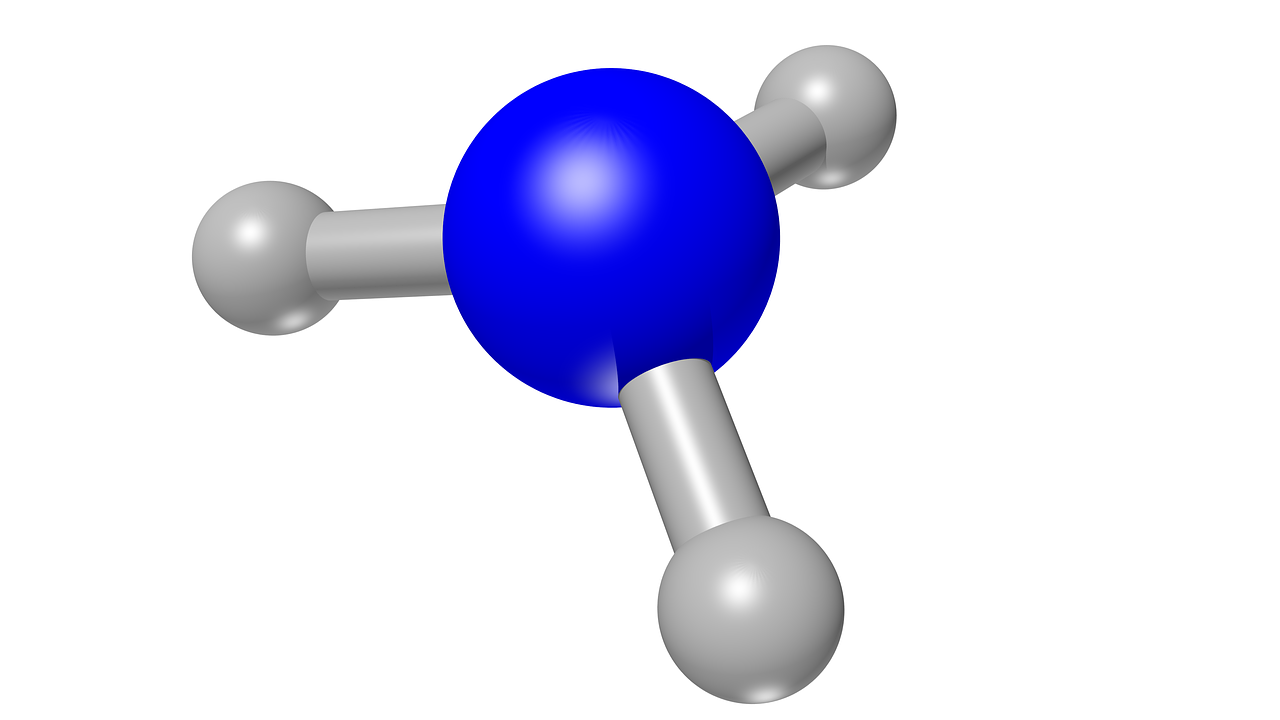 As discussed above, Ammonia forms three bonds with hydrogen atoms leaving behind a single lone pair on the nitrogen atom.

The lone pair exerts a repulsive force on the three bond pairs N-H as per the VSEPR theory.

The overall shape of the NH3 molecule comes out to be Trigonal Pyramidal. If we describe the position of the atoms, the nitrogen is a central atom with asymmetric charge distribution and having three bonds and one lone pair.

These N-H bonds are arranged in a tetrahedral shape. The bond angle of N-H in the NH3 molecule is around 106.7 degrees.

The hybridization of the ammonia molecule is sp3.

Below is the lewis structure of the Ammonia molecule for better understanding. You must also go through the article written on NH3 Lewis Structure, Molecular Geometry, and Hybridization.

Factors that determine the polarity

Electronegativity: In a covalent molecule, if two atoms forming a bond have different electronegativities, they disperse unequal charge on them resulting in the polarity of the bond.

And it should be understood that the greater the difference between the electronegativities of both atoms, the greater is the polarity of the bond.

Dipole moment: it is a measure of the polarity of the bond between two atoms. It is calculated as follows.

Mathematically, the dipole moment of a molecule is the product of the charge over the atoms and the distance between them.

And in NH3, the resultant dipole moment is calculated around 1.46D.

Geometry: The molecular structure of a complete also depicts its polarity because symmetrical compounds are nonpolar in nature. Whereas the molecules that are distorted or asymmetrical in shape tend to be polar.

Basically, in symmetrically shaped molecules, the dipole moments within the molecule get canceled out of each other. The dipole moment is a vector value that has direction as well as magnitude.

Ammonia being an asymmetrical molecule having three hydrogen atoms and one nitrogen forms the tetrahedral geometrical structure.

The electronegativity difference between nitrogen and hydrogen makes the N-H bond polar and all the dipole moments of N-H bond constitute a net dipole moment of Ammonia molecule making it a polar molecule.

In this article, I tried to make you guys understand the polarity of ammonia. If you have any questions regarding that, you can ask them in the comment section. We will reach out to you as soon as possible.