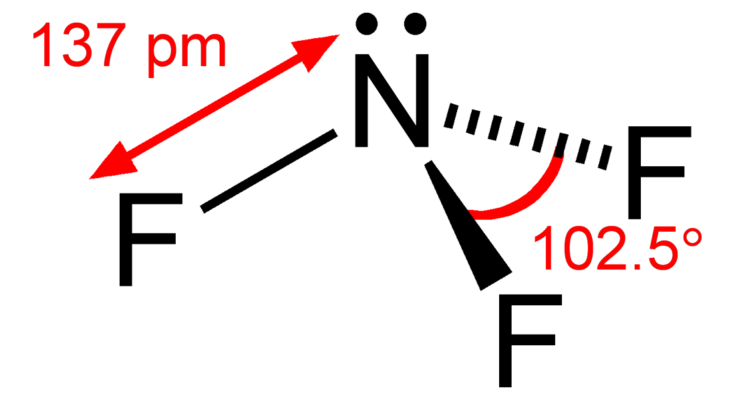 Nitrogen trifluoride is a chemical compound with chemical formula NF3. it is classified as an inorganic compound. It exists as a colorless gas having a musty smell at room temperature. It is non-flammable in nature. Many students may have a question regarding whether NF3 is polar or not. In this article, we will discuss this and will cover its properties and applications.

So, Is NF3 Polar or Nonpolar? NF3 is polar in nature due to the presence of lone pair on nitrogen atom causing a distorted shape of NF3 molecule and the difference between the electronegativity of fluorine(3.98) and nitrogen(3.04) causes polarity in N-F bonds and result in a non zero dipole moment of the entire molecule.

Nitrogen trifluoride exists in the form of colorless gas with musty odor at the standard conditions of temperature and pressure.

It was first synthesized by the scientist Otto Ruff in the year 1903 by the process of electrolysis of a molten mixture of hydrogen fluoride and ammonium fluoride.

It is known to be lesser reactive than other halides of nitrogen like nitrogen trichloride, nitrogen tribromide, etc.

It is manufactured directly by reacting nitrogen with fluorine and commercially it is supplied in pressurized cylinders.

The molecule of NF3 consists of a total of 8 valence electrons. Nitrogen atom contains 5 electrons in its outermost shell and requires 3 electrons to complete its octet.

And, Fluorine has 7 valence electrons in its outermost shell and requires a single electron to complete its octet.

The electronegativity of Nitrogen is 3.04 and that of fluorine is 3.98. Due to this difference, the N-F bond ensures polarity in it.

Being more electronegative, the fluorine atom attracts the bonded electron pair slightly more towards it and gains a partial negative charge.

In return, Nitrogen gains a partial positive charge on it.

As a result, the dipole moment across al the three N-F bond rises in the downwards direction towards fluorine atom. And one dipole of lone pair originates towards lone pair in the upward direction.

The net dipole moment of the entire molecule turns out to be 0.24 D.

Contents show
What are Polar and Nonpolar Molecules?
Why is NF3 a polar molecule?
Factors affecting polarity of a molecule
Hybridization of NF3
Properties of NF3
Uses of NF3
Conclusion

The molecules are held with the different types of interatomic forces like ionic, covalent, metallic, and hydrogen bonds.

Covalent and ionic bonds are the strongest among all the bonds.

Polar Molecules: the molecules that have non zero dipole moment are known as polar molecules. These molecules have unequal charge distribution on its atoms.

The covalent bond formed by two atoms is said to be polar if the atoms differ in their electronegativity.

This is because more electronegative atom attracts the bonded electron pair slightly more towards its side and gains partial negative charge whereas other atom gains partial positive charge.

Few examples of such molecules are OF2, NH3, CO, etc. You can check out the reason for the polarity of NH3.

Nonpolar Molecules: The molecules that have zero dipole moment are said to be nonpolar. The atoms within these molecules have equal charge distribution on them due to which no polarity occurs in them.

The two atoms that are covalently bonded form a nonpolar bond if the electronegativity of both atoms is the same.

Few examples of such molecules are PCl5, SO3, Cl2, etc. You can check out the reason for the non-polarity of SO3.

Why is NF3 a polar molecule?

Nitrogen trifluoride consists of 1 nitrogen and 3 fluorine molecules that differ in their electronegativity.

The three fluorine atoms form covalent bonds with the nitrogen atom by sharing one electron of each other to get stabilized.

One lone pair remains on the nitrogen atom that causes repulsion between lone pair and bond pairs resulting in the bent shape (trigonal pyramidal) of the NF3 molecule.

As a result, the three dipoles across the N-F bond originate in the downward direction and one dipole originates towards upward direction due to the presence of lone pair.

The net dipole moment of the entire molecule comes out to be 0.24 D.

The dipole moment of a molecule measures the extent of polarity in it.

The shape of the molecule is similar to that of ammonia.

In a molecule, if there is a difference between the electronegativity of two atoms then there exists a polarity in that bond.

The polarity of a molecule is directly proportional to the difference in the electronegativity of atoms.

It is the product of the charge on atoms and the distance between them.

Geometrical shape: The shape of a molecule is an important parameter to check whether a substance is polar or not.

Below is the image of the geometrical shape of the nitrogen trifluoride molecule. 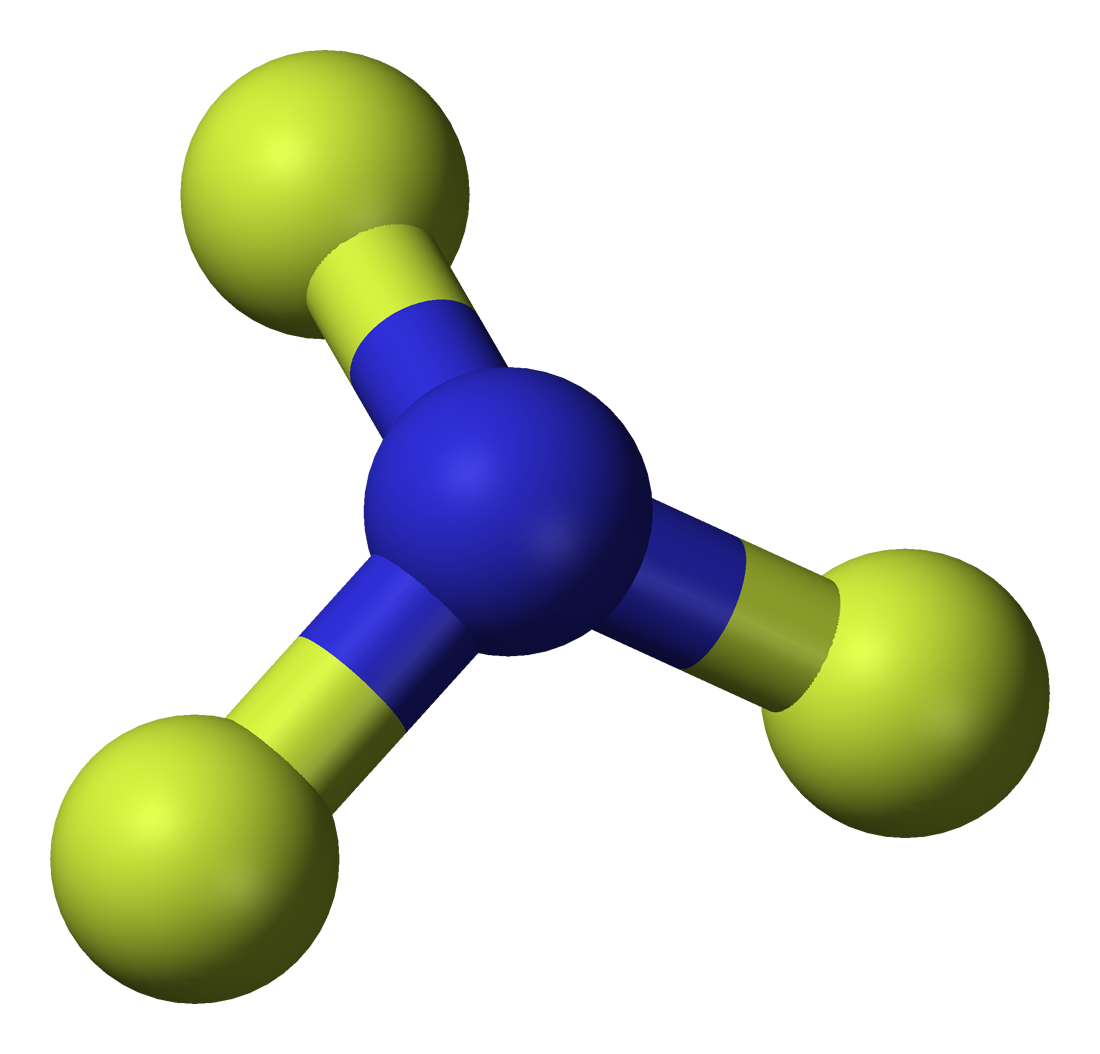 The term hybridization of a molecule is the concept of mixing of two electrons orbitals at the same energy level to form a new type of orbital.

This intermixing of orbitals is based upon quantum mechanics.

As discussed above, the molecule of NF3 has distorted pyramidal structure therefore it has sp3 hybridization.

Many of you may often mistake it to be sp2 as it has only 3 atoms bonded to it. But it must be understood that NF3 also consists of one lone pair on nitrogen atom due to which it has sp3 hybridization.

For detailed information, you must read out the article written on NF3 lewis structure, hybridization, molecular geometry.

Nitrogen trifluoride consists of 3 fluorine and 1 nitrogen atoms that differ in their electronegativity. The shape of this molecule is trigonal pyramidal due to the presence of lone pair on the nitrogen atom.

Fluorine being more electronegative pulls the bonded electron pairs slightly more towards its side and gains a partial negative charge due to which polarity rises in the molecule.

Therefore, the dipole moment of the NF3 molecule is 0.24 D that makes NF3 a polar molecule.

Guys, if you have any questions regarding the polarity of NF3, you can ask them in the comment section. We will reach out to you as soon as possible.