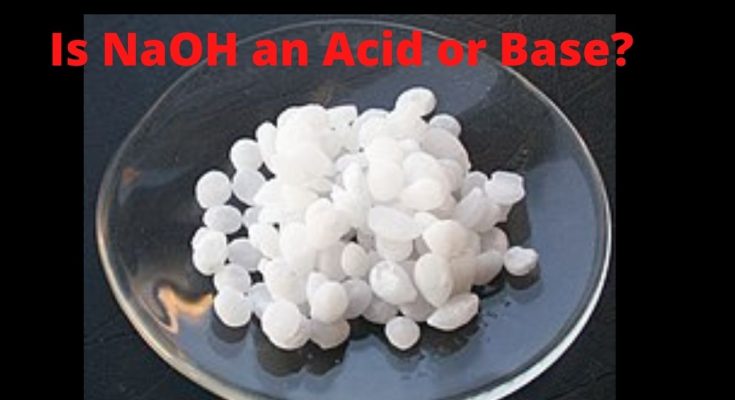 Sodium hydroxide is a metal hydroxide. It is commonly known as caustic soda.

NaOH is a corrosive solid and is soluble in water.

The most common method of preparation of NaOH is the electrolysis of brine solution.

NaOH is a very useful compound.

Substances can be classified as acids, bases, and salts based on their various properties.

In this article, we will understand various theories explaining the meaning of acids and bases and study the nature of sodium hydroxide in detail.

So, is NaOH an acid or a base? NaOH is a strong base as it completely dissolves in water to release hydroxide ions (along with sodium ions) which are responsible for the basic nature of an aqueous solution. A Compound that releases OH- ions in an aqueous solution is basic in nature. The pH value of NaOH is around 12 classifying it as a strong base.

Contents show
Why is NaOH a Base?
Arrhenius Theory
Lewis Theory
Bronsted-Lowry Theory
What makes NaOH a Strong Base?
Weak Base Vs. Strong Base
Why is NaOH not an Acid?
Conjugate Acid of NaOH
Why is NaOH a Lewis Base?
pH of NaOH
What Factors affect the Strength of a Base?
Acidity of NaOH
The Litmus Test of NaOH
Conclusion

Why is NaOH a Base?

Different scientists gave different definitions for acids and bases. We will focus on three main theories.

When NaOH is dissolved in water, NaOH breaks down to release Na+ and OH– ions. Due to the release of hydroxide ions in water, it is classified as an Arrhenius base.

This theory is valid when the solvent is water.

In the case of NaOH, hydroxide ion is released, which has lone pair of electrons, and other electron-deficient compounds can accept these electrons.

When NaOH reacts with an acid, it accepts the proton lost by the acid and behaves like a Bronsted-Lowry base. In NaOH, OH– accepts the proton. Thus, a higher concentration of hydroxide ions means a stronger base. 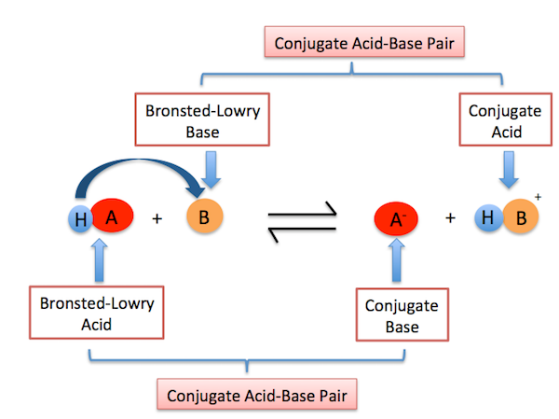 Thus, according to all three major theories, NaOH has been classified as a base.

All bases are not soluble in water.

Bases that are soluble in water are called alkali. Sodium hydroxide is an alkali. 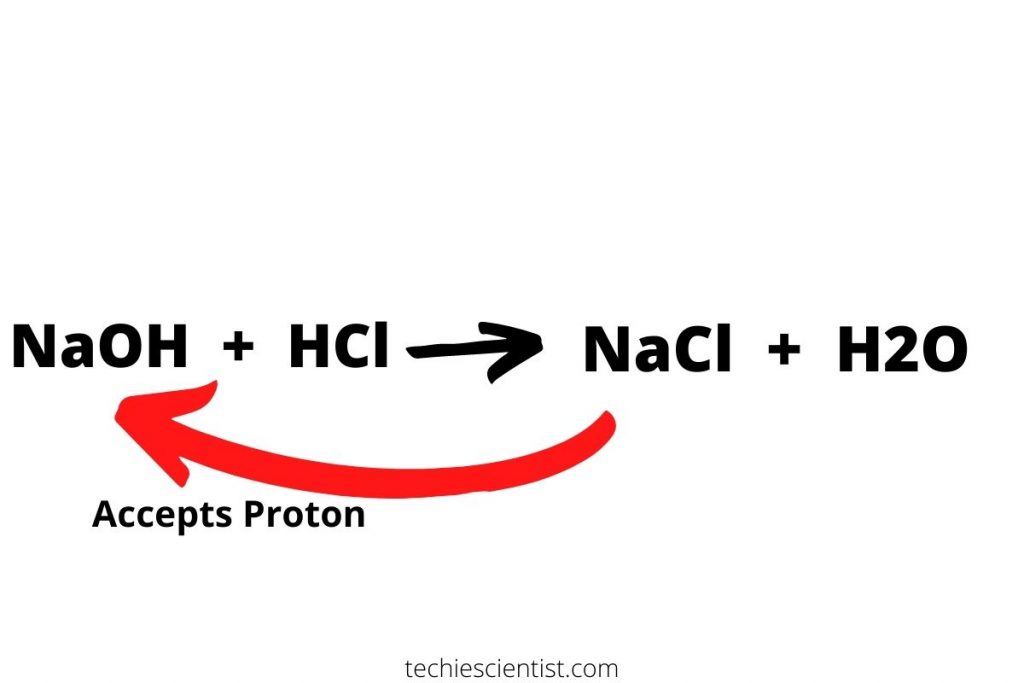 What makes NaOH a Strong Base?

A base can be classified as strong or weak (according to Arrhenius theory) depending on the extent of hydroxide ions released on dissolving in water.

A compound is considered a strong base if it dissociates completely in water to release hydroxide ions and the counterions.

In the case of a weak base, complete dissociation does not occur in water. For instance, if 1 mole of a weak base is taken and dissolved in water, much less than 1 mole of hydroxide ions and counter ions would be released. 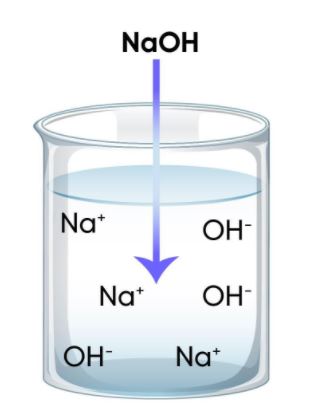 When NaOH is dissolved in water, it is dissociated to form Na+ ions and OH– ions. This happens for both strong and weak bases. The difference lies in the extent of dissociation.

NaOH dissociates entirely, and no molecule is left in an undissociated form. Hence, it is a strong base. 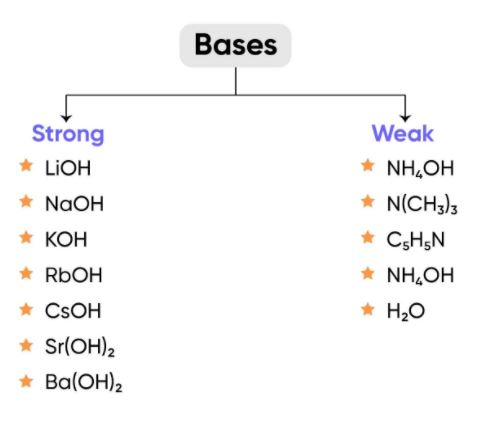 Weak Base Vs. Strong Base

For weak bases like NH4OH, the equilibrium is represented as-

Kb is relatively small for weak bases as all the base is not dissociated to form hydroxide ions.

Why is NaOH not an Acid?

NaOH dissociates in water to release hydroxide ions which can accept a proton.

According to Arrhenius concept, acid dissociates to release H+ ions in an aqueous solution, but NaOH releases hydroxide ions instead.

According to the Bronsted-Lowry concept, acid releases a proton in an aqueous solution, while in NaOH, hydroxide ions gain a proton instead of losing.

We know that HCl is acid and KOH is a base. NaOH reacts with acid like HCl to form NaCl and water but does not neutralize with another base like KOH.

This implies that NaOH is not an acid.

When an acid loses a proton, the species so formed is referred to as the acid’s conjugate base. A very strong acid has a weak conjugate base and vice-versa.

When a base gains a proton, the species so formed is referred to as the base’s conjugate acid. A very strong base has a weak conjugate acid and vice-versa.

We can say that conjugate acid-base pairs differ by proton.

NaOH is a strong base. Base gains a proton. In NaOH, hydroxide ions are responsible for the basic nature, and sodium ion is just a spectator ion.

Spectator generally refers to audience. So, sodium ions do not participate; they are just present in the solution to balance the charges.

On gaining a proton, NaOH forms water along with sodium ions. Hydroxide ions accept a proton to form water which is the conjugate acid of NaOH.

As sodium hydroxide is a very strong base, its conjugate acid is supposed to be weak, and water is a weak acid only.

The conjugate acid of NaOH is Water ie; H2O

The Conjugate acid-base concept determines the relative strength of acid and base.

Why is NaOH a Lewis Base?

Lewis base is an electron-rich substance and can donate its electron pairs to another electron-deficient compound or lewis acid. Solvent need not be water for Lewis theory.

NaOH has hydroxide ions. There are lone pairs and formal charges on hydroxide ions that can be donated to an electron-deficient species like a proton (H+) to form water. 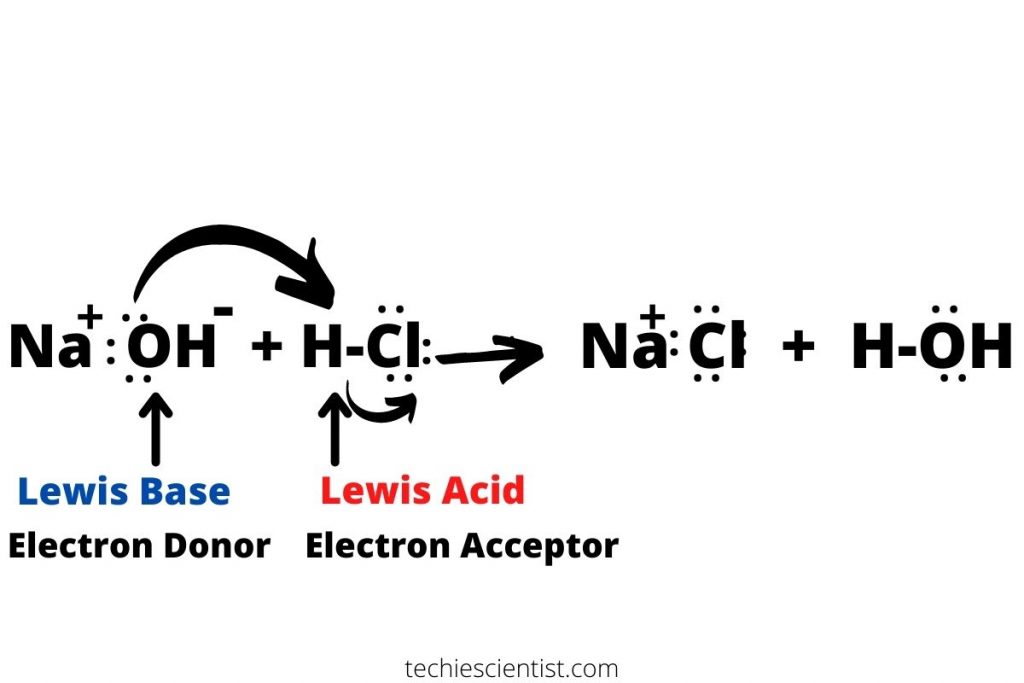 pH helps in the determination of [H+] in a given solution. It is calculated using the formula-

A high concentration of H+ means that the solution is highly acidic, and pH would be lower.

• When pH=7, the substance is neutral.

• When pH<7, the substance is acidic.

NaOH is a strong base, and therefore its pH is more than 7 and nearer to 14.

For a base, we need to know the concentration of hydroxide ions, so we have pOH.

We can easily find the strength and concentration of hydroxide ions by measuring the pH of the solution.

pH of NH4Cl – Acidic or Basic

pH of Seawater – Acidic or Alkaline

Is NaCN an Acid or Base

Is Soap Acidic or Basic – Why

Is H2CO3 a Strong Acid

pH of Honey – Acidic or Alkaline

pH of Tomato – Acidic or Alkaline

What Factors affect the Strength of a Base?

1. Atomic Size: A large atom with high polarizability can donate electron pairs easily and is more basic than a smaller atom.

For example, KOH is more basic than NaOH as K can be easily ionized due to its larger size, and hydroxide can be released faster.

For example, methylamine is more basic than aniline as lone pairs of nitrogen are delocalized in aniline.

For example, CH3– is a stronger base than F–.

The acidity of a base is defined as the number of hydroxide ions that can be produced from one molecule of a base on ionisation.

The basicity of an acid is defined as the number of hydrogen ions that a particular acid can produce on ionisation.

One molecule of NaOH releases one molecule of OH– and can react with one H+ ion to form one water molecule. Thus, sodium hydroxide is a monoacidic base.

The Litmus Test of NaOH 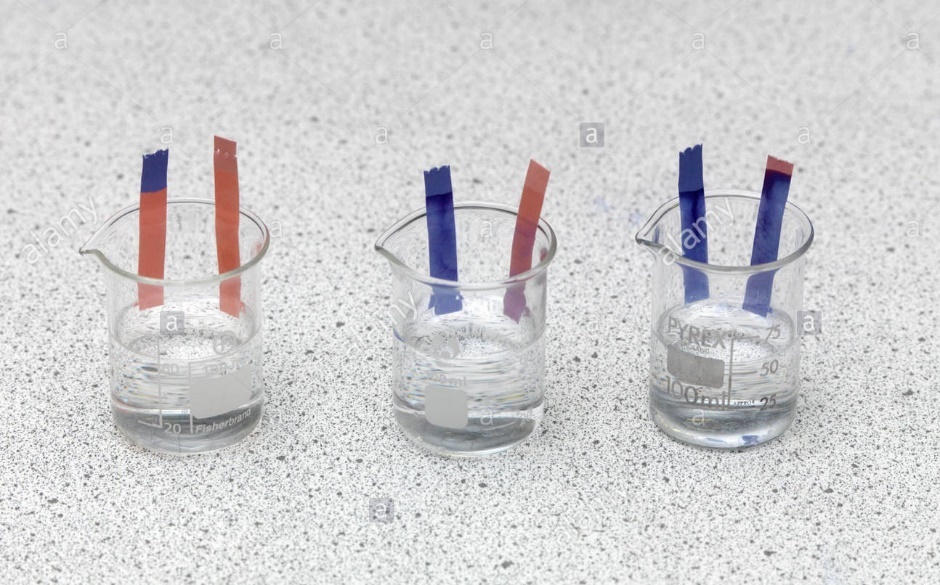 Litmus is one of the natural indicators used to check whether a given substance is acidic, basic, or neutral. Litmus solution is obtained from lichens.

The litmus dye is purple when the solution is neither acidic nor basic.

NaOH is a strong base and turns the colour of red litmus to blue and has no effect on blue litmus paper.

NaOH is a strong base in water as it completely dissociates to form hydroxide ions which can accept protons to form water.

Conjugate acid of NaOH is water.

A weak base does not dissociate entirely, and the pH lies in the range of 7 to 14.

Litmus paper can be used to check whether a compound is acidic or basic, or neutral. NaOH turns red litmus blue.