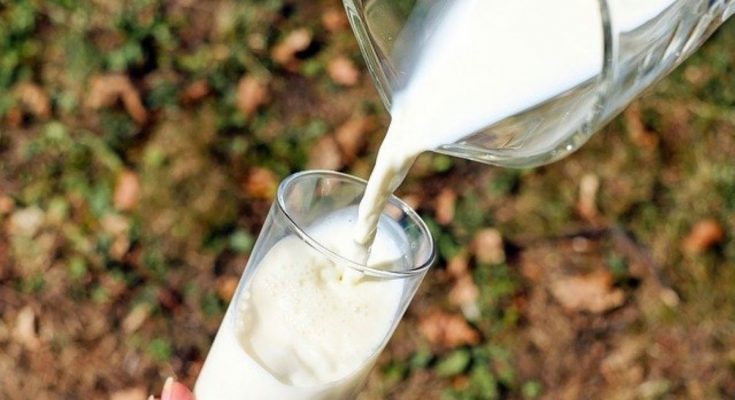 Milk is a nutrient-rich fluid produced by mammals through their mammary glands. Milk being the primary source of nutrition for the infants before they are able to digest solid food helps in strengthening the immune system and prevents several diseases.

In chemistry, we classify milk as a mixture – a mixture is a combination of two or more substances in indefinite proportion. This leads to whether milk is a homogeneous mixture or a heterogeneous mixture.

Let’s see why we say that milk is a heterogeneous mixture and not homogeneous although the mixture appears to be evenly distributed throughout.

Why is Milk a Heterogeneous Mixture? 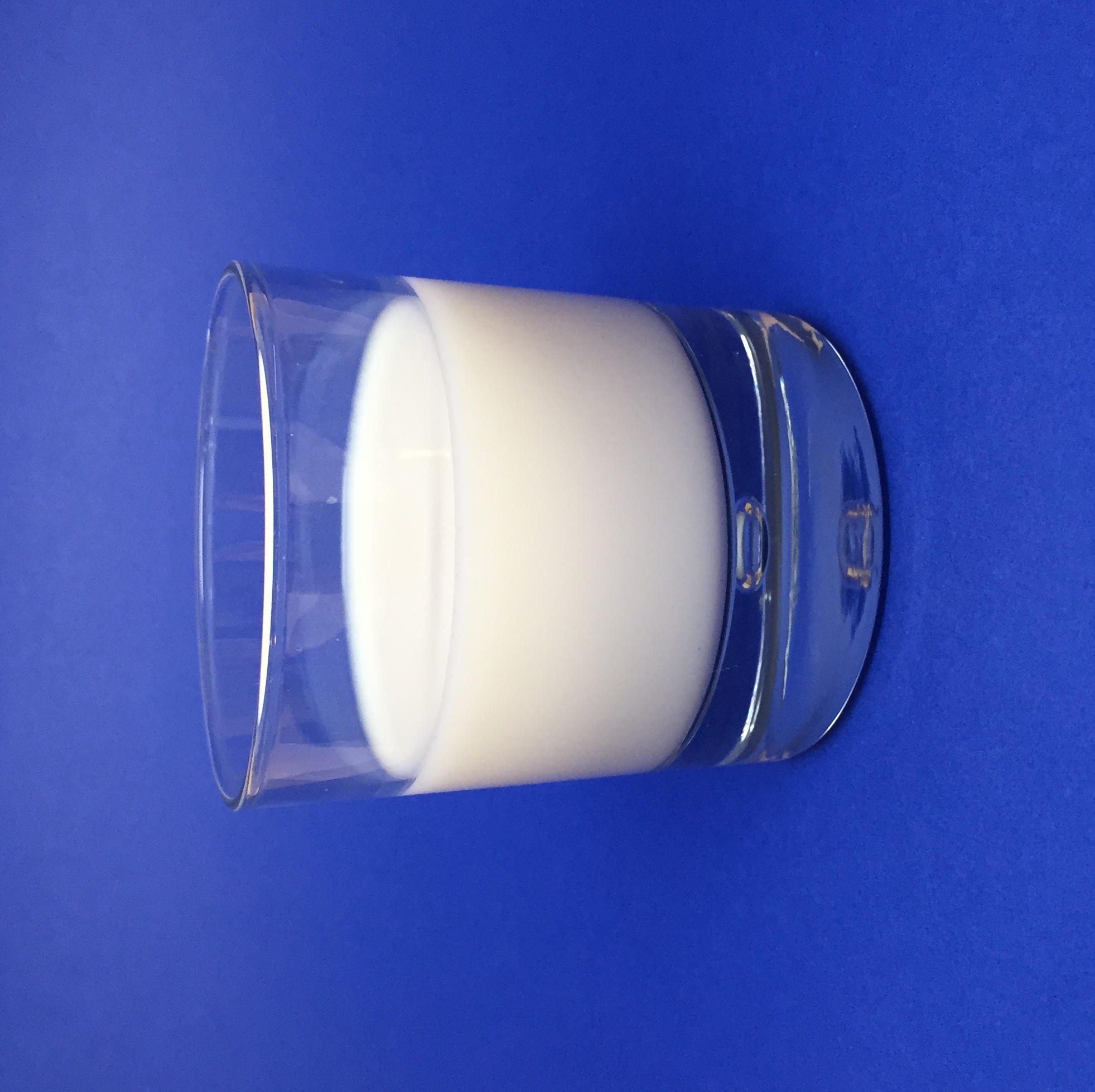 When we observe milk through naked eyes, we cannot differentiate between the constituents of the milk.

Hence for a common man, milk might appear to be a homogeneous mixture that has its components evenly distributed throughout its composition.

But when observed under a microscope, we can see insoluble tiny globules of fats and proteins dispersed in the liquid, i.e. water.

We know that water and fat are insoluble when mixed together and thus cannot form a solution which is why there appear two distinct immiscible liquid phases, and therefore milk is heterogeneous in nature.

We often observe cream settled on the top of the milk which is because of the settling of heavier fat particles but majorly the insoluble particles do not settle and remain dispersed.

This clearly shows that milk appears to be a homogeneous mixture while it is heterogeneous.

First, let us learn what a mixture is…

A mixture is a substance that is composed of two or more forms of matter in any proportion which can be separated into its constituents by physical means.

When a mixture is prepared by two or more substances, it does not undergo any chemical reaction, therefore the components of the mixtures can be separated again.

Although the composition of the components of a mixture remains unchanged, still the properties of the mixture are found to be different as compared to its components.

For instance, when water is mixed with alcohol, the properties like the melting and boiling point of the mixture do not correspond with any of its constituents.

Mixtures can be solids, liquids, and gases.

1. The components of the mixtures can be easily separated by physical means.

2. The components are mixed in variable proportions.

3. The properties of the components do not change even on mixing while the mixture has different properties than its constituents.

The mixtures can be classified into two main categories: 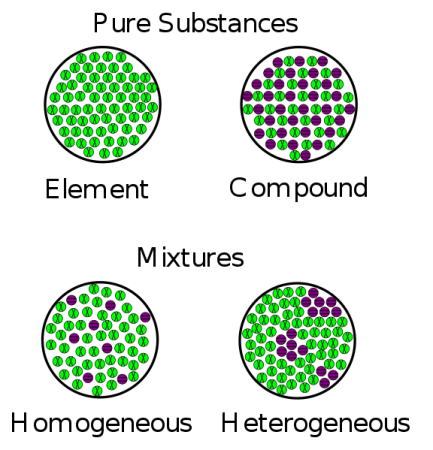 Homogeneous Mixture: A mixture in which all the components are uniformly distributed throughout is known as a homogeneous mixture.

Such mixtures have only one phase and the components of the mixtures cannot be separated physically.

These mixtures have two or more phases and the components of the mixture are identifiable by naked eyes.

For example mixture of soil and sand, sulfur and iron filings, oil and water, etc.

Properties of Homogeneous and Heterogeneous Mixture

Now that we have understood what homogeneous and heterogeneous mixtures are, let us study the properties of two types of mixtures.

1. The particles in the mixture are uniformly distributed and thus the components cannot be seen with naked eyes.

2. The particles in the homogeneous mixtures possess the same physical properties in the solution.

3. In a homogeneous mixture, the size of the components is usually very small, that of molecular or atomic level, the particles have a size usually less than 1 nm.

4. Such mixtures can be separated into their respective components through processes that are based on the difference in physical properties, like distillation, crystallization, etc.

1. In heterogeneous mixtures the components are not distributed uniformly and thus can be seen with naked eyes.

2. The constituent particles do not have the same properties in the mixture.

3. The components of heterogeneous mixtures are generally large in size which is why they can be separated by simple physical methods like filtration, sieving, etc.

4. Heterogeneous mixtures show a Tyndall effect, the light beam directed towards the mixture is scattered by the particles owing to their greater size.

Is Milk a Colloid or Suspension?

Before knowing whether milk is a colloid or suspension, let us first understand the further classification of mixtures depending on the size of components in the mixture.

A solution is a homogeneous mixture in which a substance dissolves (solute) in the other (solvent).

The size of particles in a solution is less than 1 nm which are not visible through naked eyes and cannot be separated easily.

The solute is said to be the dispersed phase and the solvent in which it is dissolved is the dispersion medium.

For example, a mixture of salt dissolved in water is a solution, since the particles are too small to be visible and separated easily.

Colloids are heterogeneous mixtures that have medium-sized insoluble particles suspended in another substance.

These insoluble particles do not settle over a period of time. The particle size in colloids ranges between 1 nm and 0.1 micrometers.

These appear similar to solutions but unlike solutions, the particles are suspended rather than completely dissolved.

You might have observed that it is very difficult to see across the smoke during a fire. The reason behind it is the same as a colloid that consists of the suspended particle.

Check out the article on is smoke colloid.

A suspension is a heterogeneous mixture containing large particles that are visible and settle down over a period of time and can be filtered.

The particles are not dissolved in the mixture but rather dispersed. The particle size ranges between 1 to 50 micrometers in diameter.

A mixture of sand in water is an example of suspension, the sand is dispersed in water when mixed but settles down when untouched.

The image given below depicts the 3 types of mixtures and their relative sizes:

The figure below shows the Tyndall effect through the three types of mixtures. 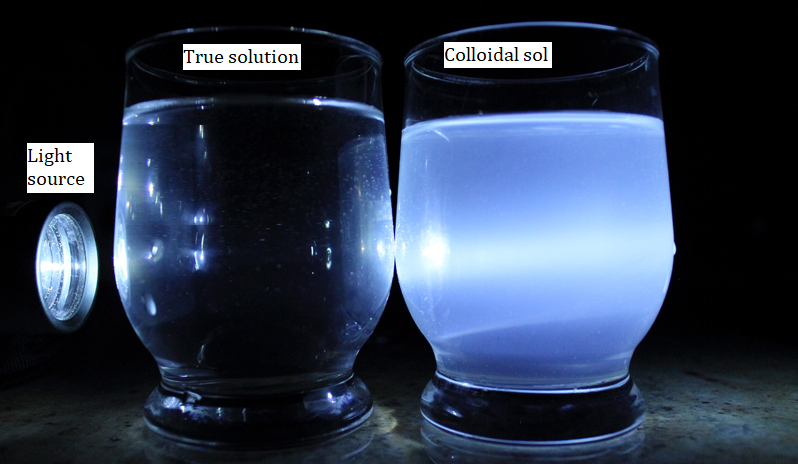 Let us now see if milk is a colloid or suspension…

Milk is an example of emulsion i.e. when liquid particles are dispersed in a liquid medium, the colloid is known as an emulsion.

What is Milk made up of?

Now that we know that milk is a heterogeneous mixture, let’s see what is milk made up of?

Milk is an emulsion or a colloidal mixture containing butterfat globules in a water-based fluid. The fluid is a dissolved mixture of carbohydrates and proteins and contains minerals.

Furthermore, there are various other micronutrients like amino acids, vitamins, and trace elements present in milk. About 250 compounds are found to be present in a milk sample.

At the end of this article, we can conclude that milk is a heterogeneous mixture in which the fat globules are suspended in the water-based liquid.

Milk might appear to be homogeneous but in actual it is a heterogeneous mixture in which the particles are insoluble and not evenly distributed in the mixture.

Furthermore, milk is classified as a colloid, where the insoluble particles do not settle over a period of time when untouched and remain standing in the mixture. Also, milk is a type of emulsion as liquid particles are dispersed in a liquid medium.