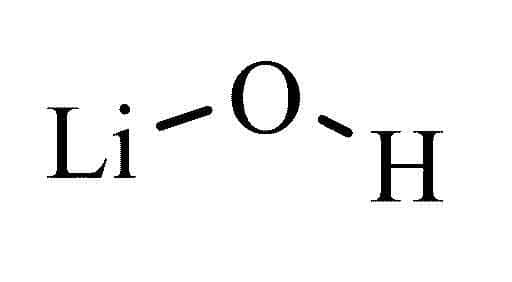 LiOH is referred to as Lithium hydroxide, which belongs to the family of hydroxides of alkali metals, i.e. Group 1 metal. The molar mass of LiOH is 24 g/mol and the solution has a water-like appearance without any odor.

LiOH can be prepared by reaction of Li metal or LiH, lithium hydride with water. It exists in the monohydrate form at room temperature and loses the water of crystallization at 423 K (150oC).

Another method for the preparation of LiOH is by the reaction of lithium carbonate with lime.

So now the question arises whether LiOH is a strong base.

So, is LiOH a strong base? Yes, LiOH is considered a strong base because it completely dissociates into respective ions in an aqueous solution giving Li+ and OH- without leaving any base in the solution. Also, LiOH undergoes complete neutralization with acids giving only salt and water. Other factors such as low ionization energy, the difference in size, and electronegativity of the Li atom weakens the Li-OH bond and thus it breaks easily and forms OH ions in the solution. Hence LiOH is a strong base. 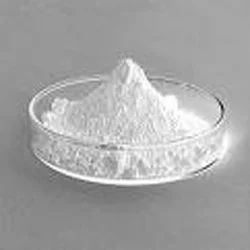 Why is LiOH a Base?

There are three concepts that define whether a compound is an acid or a base. The concepts are as follows:

Since LiOH on dissociation in aqueous solution produces OH ions, therefore it is an Arrhenius base.

This concept is based on accepting or donating the proton.

When a bronsted base accepts a proton, it forms an acid, which is said to be the conjugate acid of the base.

Similarly, when a bronsted acid donates a proton, it forms a base known as the conjugate base of the acid. 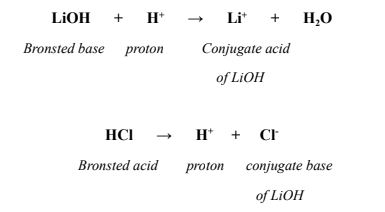 From the above reaction, we can see that LiOH accepts a proton from HCl and therefore it is a bronsted base.

LiOH contains OH- which is an electron-rich species having 3 lone pairs of electrons and can donate the lone pair of electrons to the electron-deficient species, hence it is a Lewis base.

Through all the three concepts discussed above, we come to the conclusion that LiOH is a base as it can act as a proton acceptor or electron donor, and release OH ions in the solution.

How do we know that LiOH is a strong base or a weak base?

We can learn whether LiOH is a strong base or a weak base by understanding the difference between the two types of bases.

Strong Base: The compound which dissociates completely into its ions to give OH ions without leaving any base in a solution is said to be a strong base. For example, NaOH, KOH, Ca(OH)2, Ba(OH)2, etc.

The base dissociates completely to form stoichiometric moles of ions.

Weak Base: A weak base dissociates partially into ions with some undissociated base remaining in the solution.

NH3, CH3NH2, NH4OH are examples of weak bases and they leave behind some amount of base in solution and not stoichiometric moles of ions.

Hence, LiOH is a strong base as it dissociates completely in the solution giving OH ions and leaving no undissociated base.

Li+is a weak conjugate acid of LiOH and therefore does not undergo backward reaction and remains in the solution in the form of ions.

The low ionization energy makes the bond more polar which results in the weakening of metal-oxygen bonds and therefore releasing OH ions.

Thus the basic strength of alkali metal hydroxides increases down the group as the ionization energy of the metals decreases on moving down the group. 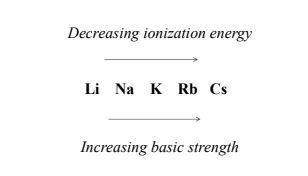 2. Size of the atom (M): The basic strength of metal hydroxides also depends on the size of the metal atom, M.

Greater the size of M, weaker will be the M-OH bond and therefore OH ions will be easily separated.

Hence the basic strength of MOH increases on moving down the group with increasing size of M. 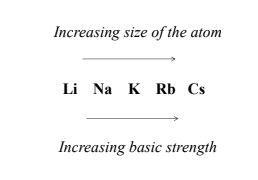 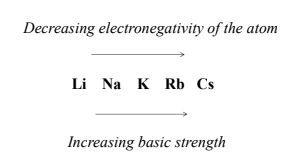 Thus due to the high electronegativity difference, the bond weakens and LiOH dissociates completely into its ions and thus making it a strong base.

LiOH is the weakest of all the alkali metal hydroxides but is still a strong base as it dissociates completely into its respective ions.

1. LiOH is a hygroscopic white solid. A hygroscopic compound is one that absorbs moisture from its surroundings.

1. Since LiOH is a strong base it reacts with acids to undergo complete neutralization to give salt and water through a double displacement method.

1. LiOH can be used as a precursor to making various lithium salts, such as LiCl, LiBr, Li2SO4, etc.

2. LiOH is used in ceramics and some Portland cement and also in water reactors as a coolant.

3. In spacecraft and submarines, LiOH is used to absorb carbon dioxide, CO2, from the air to prevent the passengers from suffocation.

4. It is used as an electrolyte in batteries. LiOH helps in the production of nickel-hydrogen, nickel-cadmium batteries.

5. Lithium hydroxide is widely used in the production of lithium soaps of fatty and stearic acid which find their application as thickeners in lubricating greases.

In conclusion, we can say that LiOH is a base as it releases OH ions in an aqueous solution, and moreover, it is suggested by the three theories, i.e. Arrhenius, Bronsted-Lowry, and Lewis concept.

And it completely dissociates in the solution which makes it a strong base. The basic strength of the hydroxides depends on the ionization energy, size of the metal atom, and the electronegativity difference between the metal atom and oxygen.

Thus, LiOH is a strong base although it is weaker than the alkali metal hydroxides.