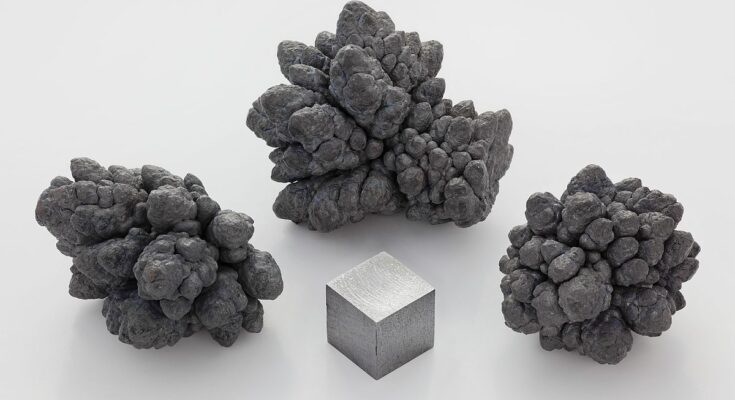 Lead, a very widely used in batteries across the world. No wonder lead has wide use in batteries. But with so much wide use, the question about its magnetic property was running in the back of my mind. I decided to research deeply about this topic and came to a conclusion to share it with you guys with complete detailed knowledge.

Lead, with a symbol Pb (derived from the Latin word plumbum), has an atomic mass of 207.2 u and atomic number 82.

It belongs to the post-transition metals and can be easily extracted from ores.

Galena is the main ore of lead which also bears silver. Metallic lead beads were found in Asia Minor, back in 7000-6500 BC.

The spike in the spread of lead production was due to its association with silver, obtained by burning galena.

Now let’s move onto the reasons for lead’s magnetic properties in a more detailed way.

Contents show
Why is Lead Diamagnetic?
Magnetic Susceptibility of Lead
Does lead block magnetic fields?
Why can Pb(+4) be reduced to Pb(+2) easily?
Properties of Lead (Pb)
Conclusion

Why is Lead Diamagnetic?

Lead’s diamagnetism is because of its alignment of magnetic dipoles in the opposing direction to that of the applied magnetic field.

Adding to this, magnetic susceptibility is also negative for this metal, indicating its repulsive nature from magnets.

As a Pb atom, with an electronic configuration of [Xe] 4f14 5d10 6s2 6p2 , have 2 unpaired electrons in p orbital. Thus it will remain as a ‘paramagnetic atom’.

But in Pb metal, the unpaired metals will pair up in the bonding MO. and thus will be diamagnetic.

Given below is the MO diagram of PbO, focusing on the Pb part we can understand the above-mentioned fact. 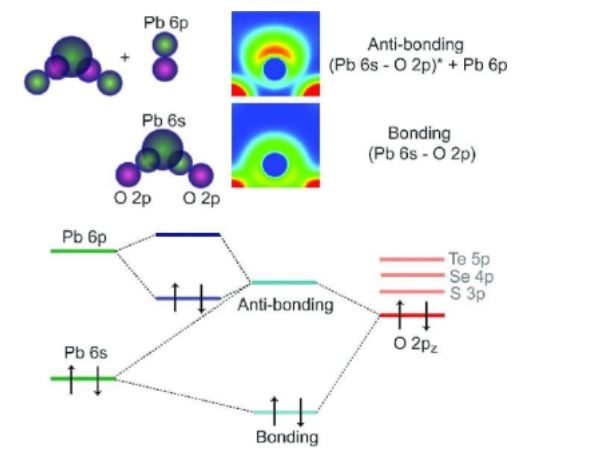 The green lines are the atomic orbitals of lead with 6s and 6p. Both have 2 electrons but in a paid fashion.

Next, the blue line is the orbitals of the 6p having 2 electrons again in paired fashion. And if we look at the molecular orbital of PbO (light blue lines), there also, electrons are in a paired way.

Thus this MOT depicts the diamagnetic nature of Pb.

Below given is a video where the magnetic attraction is compared between aluminum, copper, brass, and lead.

In the video, the movement of the magnet is a lot quicker in lead than the rest.

The reason for that is the difference in the electrical resistivity of these metals.

The lower the electrical resistance, the higher is the current and stronger the magnetic field that’s produced.

So, Lead has the highest resistance and thus shows the weakest magnetic field among the four metals.

According to different facts, it is clear that magnetic susceptibility is negative. The value is -1.8.

This negative value indicates that the lead’s magnetic effect is repulsive in nature, i.e diamagnetic.

Now magnetic susceptibility is a degree to which a metal can be magnetized in an external magnetic field.

In simpler words, whether a particular metal will be attracted or repelled and in what amount, is determined by this factor.

It is positive in the case of paramagnetic and ferromagnetic substances.

Negative for diamagnetics and zero if the material does not respond to magnetic fields.

Also with respect to Crystal Field Theory, we can see that the magnetic moment of lead is zero, due to the non-availability of unpaired electrons.

Magnetic moment tells us about the magnetic strength of a metal.

Hence it’s another proof that lead is diamagnetic. If you want to check its magnetic moment the formula is given below:- 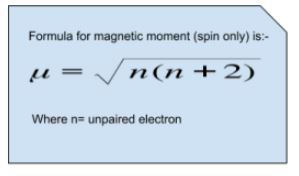 Permeability is basically the quality or state of being permeable. In electromagnetism, it is the degree of magnetization that a material obtains in an applied magnetic field.

Thus lead with so low permeability, like that of air, will not reroute the magnetic fields in any way.
Pure lead has a bright, silvery color with a tint of blue.

Some of the characteristics that lead possess are high density, malleability, ductility, and high resistance to corrosion.

The pair of electrons in 6s orbitals remains chemically inert due to the inert pair effect. So Pb2+ attained a configuration with fulfilled d and f orbitals.

Additionally, there is a very high positive value for E°pb4+/pb2+ indicating that Pb4+ has a higher tendency to get reduced into Pb2+.

The oxidation state of +2 is more stable than +4 due to this inert pair effect.

So, basically in heavier elements relativistic variation of the mass of electrons becomes prominent to cause overall contraction of atoms.

This contraction is known as relativistic contraction. Note that this effect is important for Z>80.

In Pb, due to the relativistic effect of 6s, there is a very high promotional energy from 6s to 6p. This energy cannot be compensated by bond formation.