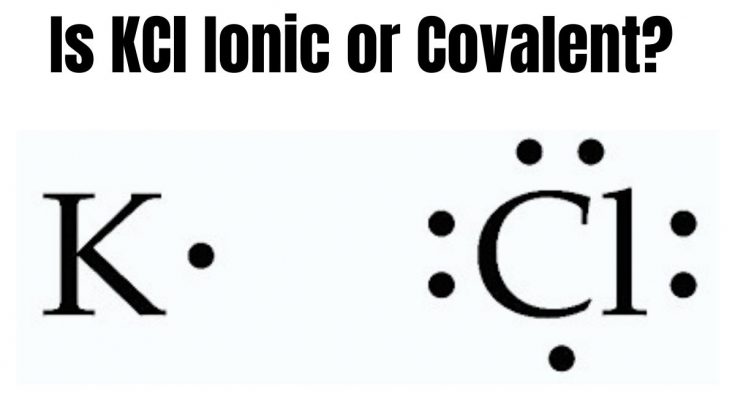 KCl is a metal halide salt with a molecular weight of 74.55 g/mol. It is an odorless and whitish or colorless crystalline solid which is saline in taste. The crystals occur as elongated, prismatic, or cubic. It has a refractive index of 1.48 and is soluble in polar solvents like water.

This binary salt has melting point at 771°C; however, the concept of boiling point does not apply to it as the compound sublimes at 1500°C. It occurs in nature in brines and ocean water and also as minerals in combination with other elements namely sylvinite, carnallite, kainite, potash, etc.

In this blog, we will study whether KCl is ionic or covalent and its reasons.

So, is KCl ionic or covalent? Yes, KCl is ionic in nature as the electronegativity of Potassium is 0.82 while that of Chlorine is 3.16 and hence, the difference between the electronegativity of these two elements is 2.34 which is greater than 2.0, required for the formation of ionic bond. Moreover, the ionic bonds are always formed between a metal and a non-metal therefore, KCl can rightly be placed in the category of ionic compounds.

Contents show
Why is KCl Ionic?
What are Ionic and Covalent compounds?
Electronegativity
Other facts about KCl
Conclusion

Why is KCl Ionic?

To understand this we will first have to answer another question which is “Why do elements form chemical bonds?”

Well, the simple answer to this question is ‘Stability’.

Every atom craves to stabilize the electrons in its outer shell and therefore, participates in the chemical bonding which helps maximize the stability of its valence electrons.

The first shell is stabilized by two electrons, this applies to hydrogen atoms that bond amongst themselves in absence of any other element to stabilize the outer shell.

Similarly, the post hydrogen and helium atoms (first row elements) octet rule apply to predict the stability of other atoms.

Talking about Potassium Chloride, here Potassium (K) belongs to the first group and fourth period of the Periodic table indicating that it has one unstable electron in its outer shell while Chlorine (Cl) comes from the seventeenth group and the third period therefore has seven valence electrons.

Hence, Potassium, which has one proton more than the number of its electron, has a tendency to give away its extra electron, forming K+ and thus, easily donates its lone valence electron to Chlorine, which is one electron short of forming an octet and is more likely to accept the electron to form Cl-.

Therefore, Potassium and Chlorine being oppositely charged ions attract each other and due to large electronegativity difference forms a chemical bond resulting in the formation of KCl through ionic interaction.

This can also be understood through the Lewis structure of KCl (Figure 1) where it can be seen that one valence electron of Potassium is taken away by Chlorine which has 7 valence electrons in its outer shell to form a stable ionic unit comprising of K+ and Cl-.

What are Ionic and Covalent compounds?

To understand the concept of ionicity and covalence we will have to dig a little deeper into how are these two states achieved.

Essentially, the compounds comprising of at least two oppositely charged ions i.e. one positive and one negative, are referred to as Ionic compounds.

Usually, such bonds exist between a metal and a non-metal. Ionic compounds are electrically neutral as the charges on different atoms are equal and opposite and are, therefore, nullified.

The utmost important condition for the formation of an ionic bond is that the electronegativity difference between the two atoms forming the bond should be more than 2.0 (as per some books more than 1.7), for example, NaCl, Na2SO4, NH4SCN, etc.

Unlike ionic compounds where the bond is formed by the transfer of an electron from one atom to another, covalent bonds are formed when certain atoms are unable to donate or accept an electron and therefore, share one or more of their valence electrons to stabilize their outer shells.

Such bonds are mostly formed between two or more non-metals with the electronegativity difference below 2.0.

Further, covalent bonds are of two types polar covalent bonds, where the electronegativity difference is between 2.0-0.5 indicating that the attraction of the more electronegative atom is not strong enough to pull the electron entirely towards itself, and therefore a partial positive charge appears on one atom while the other atom has partial negative charge (indicated by greek letter delta ‘δ’) example of such bond is HCl.

Check out the article on the polarity of HCl.

In the non-polar covalent bond, the electronegativity difference between two atoms is less than 0.5 pointing to that the electrons are shared almost equally between the two atoms. Examples may include O2, N2, CO2, etc.

You can check out the article written on the polarity of CO2.

However, for a pure covalent bond to exist, the electronegativity difference between two atoms shall be zero, which is impossible.

Similarly, for a purely ionic bond, the atom has to completely give away its electron which is also not possible, therefore, every covalent bond is partially ionic and vice versa.

Basically, Electronegativity refers to the extent of attraction an atom exhibits towards the electrons in a chemical bond.

The larger difference between the electronegativity of atoms indicates that one atom is more inclined to accept the electrons while the other tends to lose them.

It is measured using Pauling Scale.

Electronegativity decreases from top to bottom in a column and right to left in a row in the periodic table.

However, the overall trend of electronegativity is diagonal i.e. it increases from the lower-left corner to the upper right corner in the table.

Other facts about KCl

The major use of Potassium Chloride is in fertilizers, more than 90% KCl produced in the U.S. is used as fertilizer.

The growth of plants is adversely affected by the scarcity of potassium making it one of the key elements required for plant growth, it is sold under the name ‘Muriate of potash’; which also happens to be its historical name.

KCl has antihypertensive effects and is used as a remedy for treating hypotension where it is administered in the patient orally or intravenously to elevate low blood pressure.

It is also used as a nutritional supplement to prevent hypokalemia. Potassium chloride is also sometimes used as a substitute for common salt i.e. Sodium Chloride or is mixed with it to form low sodium salts.

Other than these Potassium Chloride is also used in the manufacturing of soap, mixed with animal feeds to enhance milk production in dairy animals, as a completion fluid in petroleum and natural gas operations, in glass manufacturing industries, etc.

It is also used in labs as calibration standards for measuring the electrical conductivity of solutions.

To conclude we can say that Potassium Chloride is an ionic compound that is formed due to the transfer of one electron from a metal, Potassium, forming K+ and acceptance of the same electron by a non-metal, Chlorine, forming Cl- and therefore configuring a stable ionic unit.