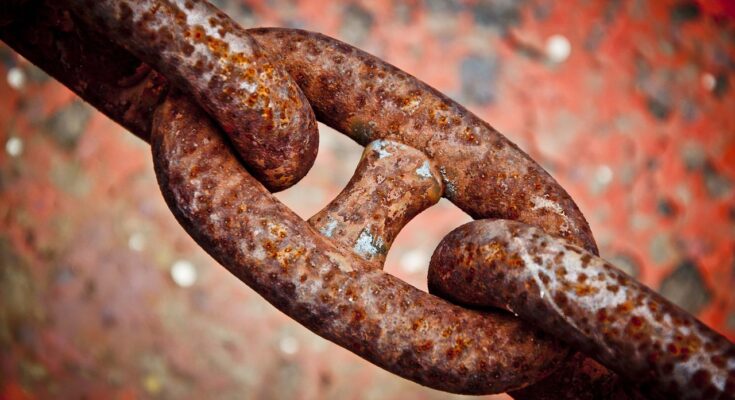 While going through some articles regarding our Iron, which accounts for over 90% of worldwide metal production, a question about its magnetism struck my mind.  So quickly I tried to search for the answer. But even though the exact answer was clear, the reason for the same just blew my mind. So let’s look closely through this lustrous greyish metal and know something more about its hidden secrets!

Iron belongs to group 8, with atomic number 26 and atomic mass 55.845 u. It is one of the most ancient elements that was used extensively for different purposes.

In the German campaign of 1813, Frederick William III commissioned the first Iron Cross as military decoration. In its metallic form, this metal is rare in the Earth’s crust.

Contents show
Why is Iron Magnetic?
Is Cast Iron Magnetic?
Why is iron attracted to either pole of a magnet?
Are complexes of iron magnetic?
Properties of Iron
Conclusion

Why is Iron Magnetic?

And in addition to that, the crystal structure of Iron also plays a role in its magnetic property. The austenitic form of iron is paramagnetic and not ferromagnetic.

A piece of iron can be magnetized in the presence of a magnetic field. When a magnet is rubbed with an iron, the north-seeking poles of the atoms in the iron line up in the same direction.

This force generated by the parallelly aligned atoms creates a magnetic field making the piece of iron a magnet. But unlike other metals, iron maintains its magnetic characteristics even if the field is removed.

If we go deeper, we can see that every material is made up of magnetic domains, which are tiny pockets containing magnetic dipoles.

When a magnetic field is introduced, these domains align themselves in a single direction and remain aligned even after the field is removed.

This tendency of “remembering the magnetic history” is called hysteresis. A magnetic field of about 1T can be produced in annealed iron with an external field of about 0.0002T.

The reason for iron’s strong magnetic field also depends on magnetic susceptibility. It is the degree to which a material can be magnetized in an external magnetic field.

This increases with increasing temperature due to the parallel alignment of dipoles towards the direction of the field.

But unfortunately, things change after Curie’s temperature. Iron loses its magnetic property at the curie point.

Thermal agitation above curie temperature is sufficiently high to destroy the alignment and change the ferromagnet to paramagnet, without any change in the crystal structure.

Cast iron is basically liquid iron that has been cast.

Molten iron is hot enough that the atoms cannot align their magnetic fields. Thus they are neither attracted nor repelled by a magnetic field.

The melting point of iron is 1538℃ and its curie temperature is 770℃, so we can say that iron loses its ferromagnetism way before its melting point.

Along with that, the high temperature required for melting iron doesn’t let the magnetic dipoles be aligned parallelly in the direction of the magnetic field.

So molten iron can’t be ‘magnetized’, but it does have conduction powers! It is an electrical conductor, so a changing magnetic field would introduce an electric current in molten iron. 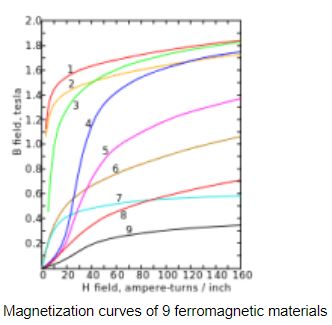 Many other questions regarding iron’s magnetism may rise, like, is iron sulfide magnetic? The answer to this is NO.

The constituents of this compound are different from that of iron, i.e in simple words, magnetic iron in combination with sulfur loses its magnetic property and becomes non-magnetic.

Why is iron attracted to either pole of a magnet?

All the magnetic dipoles inside magnetic domains are in a haphazard manner in an unmagnetized piece of iron.

Iron can be used to manufacture steel, used in reinforced concrete and girders. For its malleable nature, it is used in building cars. This metal also has some biological use as well.

Are complexes of iron magnetic?

The magnetic moment in iron-containing complexes largely depends on the nature of ligands.

According to the spectrochemical series, if the ligand is a strong field, then there is a possibility that the unpaired electrons can pair up, lowering the magnetic moment.

But if the ligand is a weak field, the magnetic moment will be high with unpaired electrons.

Basically, in presence of a strong field ligand, the splitting between eg (dx2-dy2 and dz2) and t2g (dxy, dyz, dxz) is high.

Thus the distance between them, denoted by Δo, is more than pairing energy. So naturally, electrons will try to be placed in the ground t2g level in paired form.

Whereas in the case of weak field ligand, this splitting is low.

So, more energy will be needed to pair up the unpaired electrons than to place them in the higher eg orbital.

Naturally, after filling up the ground t2g orbital, electrons go to eg orbital instead of pairing. The picture is given below clearly explains the above-mentioned fact. 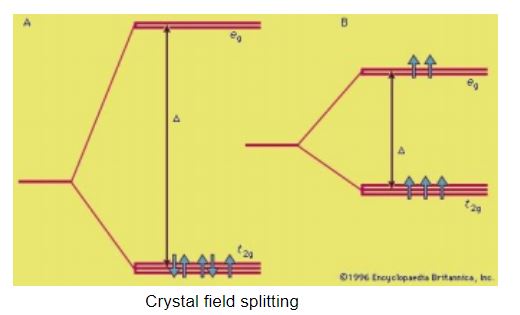 That means Fe+3 has 5 d electrons. These 5 electrons will be in unpaired fashion, in the case of [FeF6]3- but for [Fe(CN)6]3- there will be only one unpaired electron.

The reason is that fluorine is a weak field ligand compared to CN. Thus the arrangement of electrons in both cases will be;

So considering all the points and explanations we came to the conclusion that Iron is a ferromagnetic metal up to a certain temperature, with a very strong magnetic field because of the parallel alignment of its magnetic dipoles. It can hold its magnetic property even after the removal of the magnetic field.