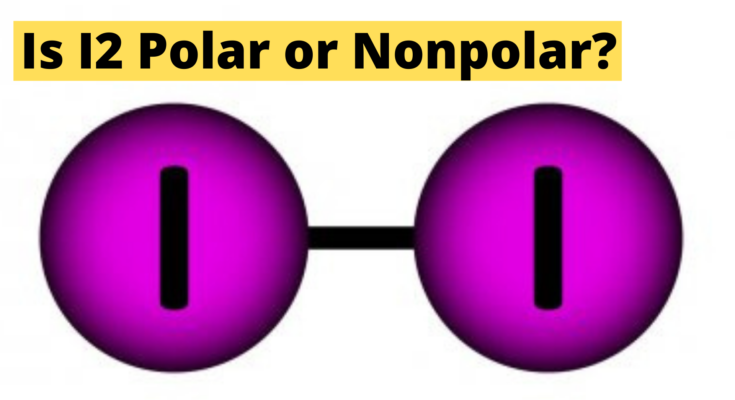 Iodine is a naturally occurring element, which can be found in seawater or in certain rocks and sediments. We can always see its references in different commercial ads about table salt. But a question about its polarity used to fill my mind very often.

After doing some research I got my answers. And in this article, I am going to share those answers with you. So let’s begin to make you guys understand with detailed answers to your queries.

So, is Iodine polar or nonpolar? Iodine (I2) is a nonpolar molecule as it is a diatomic molecule and is symmetric in shape ie; linear. Both Iodine atoms share an equal proportion of charge and have equal electronegativity due to which the net dipole moment of the I2 molecule comes out to be zero making it a nonpolar molecule.

Iodine with atomic number 53, and atomic mass 126.90, is the heaviest of stable halogens. At present primary production of iodine comes from Chile and Japan.

Because of its high atomic number and ease of attachment to organic compounds, it is also used as non-toxic radiocontrast material. Apart from its industrial use, it is essential in the synthesis of thyroid hormones.

The deficiency of iodine can lead to intellectual disabilities.

The main sources of iodine are iodate minerals, brackish water from oil and salt wells, and along with that, natural brine deposits left by the evaporation of ancient seas.

Commercially it is obtained by releasing iodine from iodate obtained from nitrate ores, or by extracting iodine vapor from processed brine.

Now let’s move on to a more detailed answer about the non-polar nature of iodine.

Polar Molecule: A polar molecule is formed when one of the ends of a molecule has more no. of charge (positive) and the other end is comprised of negative charges.

NonPolar Molecule: A molecule that does not have charges present at the end because the electrons are closely dispersed and the ones that symmetrically balance each other out are non-polar molecules.

Consider, for example, water and oil. Water is the polar molecule in this solution. On the other hand, oil is behaving as a non-polar molecule.

These two molecules are not a solution. It’s so that they can’t get mixed up. You guys can also check out the article for the polarity of Water.

And Oil being nonpolar does not mix up in the water. Check out the reason for the non-polarity of Oil.

Why is I2 nonpolar?

The main reason for the non-polar nature of iodine is that with 7 electrons in its outer orbital ([Kr] 4d10 5s2 5p5) it only needs one more to fulfill octet, so two iodine molecules will equally share 2 electrons to gain stability.

Adding to that, both are having the same electronegativity and thus there will be no net partial charge and thus I2 is nonpolar.

Electronegativity defines the strength of an atom to pull the electrons to its side.

Therefore, both Iodine atoms are exactly the same in all parameters and have equal influence on the electron bonded pair and share equally leaving behind no partial charge on any of the atom.

Still, having a problem in understanding? Don’t worry, I am going to explain it further so that you get a crystal clear picture of what is actually happening!

What makes a molecule polar or nonpolar?

Let’s have an idea about the factors which make a molecule polar or nonpolar.

Firstly, a molecule is polar or nonpolar depending on electronegativity, structure, and dipole moment. A molecule will be nonpolar if:-

On the other hand, an asymmetrical molecule, with an electronegativity difference between the bonded atoms will lead to a polar molecule.

We can get an idea about “sharing equal electrons” with the example of oxygen. Oxygen has 6 electrons in its outer shell and thus needs 2 electrons to complete the octet.

So two oxygen atoms share a total of 4 electrons to attain stability. The image attached below will show you the same! 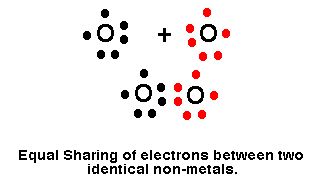 Now, iodine has 7 electrons in its outer orbital i.e 5s2 5p5. So to form a stable iodine molecule, both of the iodine share two electrons with each other. Thus a covalent bond is formed between them.

Have a look at the images attached below to get a visual of the above-mentioned theory! 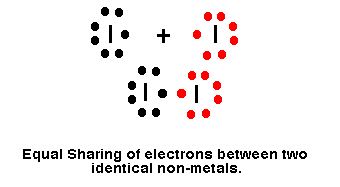 For further knowledge, it’s good to know that polar molecules have atoms with different electronegativities and exhibit charge separation and thus have a dipole moment also.

Does I2 have a dipole moment?

We can see from the attached image above that both the iodine atoms are attached at a 180° angle.

As both of them have the same electronegativity value, with a linear arrangement, there will be a net-zero dipole moment.

The geometrical structure plays a huge role in determining the dipole moment of a molecule. Symmetric molecules can never have a net dipole, although their bonds can be polar.

As we have seen iodine has a symmetric structure, leading to no net dipole.

Chemical Properties of Iodine (I2)

Does Iodine (I2) have London dispersion forces?

The only intermolecular force of attraction that holds two iodine atoms is the weak London dispersion force.

Being a non-polar molecule, there is no chance of any presence of dipole-dipole interaction.

Coming to the London dispersion force, they are a type of Van der Waals forces, which is very weak in nature.

There are enough electrons in the I2 molecule to create this force and hold the molecule together. But surely, this force is not so strong, as a result, this molecule has a low melting and boiling point. 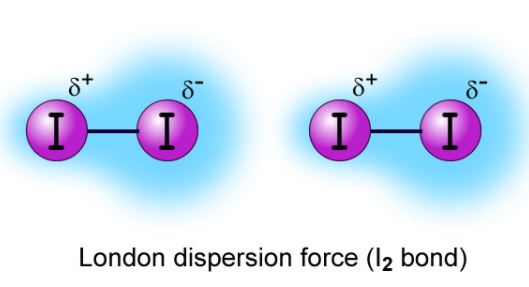 Does I2 dissolve in water?

Talking about iodine’s solubility in water, we can say they are almost insoluble in water.

In order to dissolve iodine, the hydrogen bonds of water have to be broken to get iodine between H2O molecules.

But this bond breaking will cost too much energy which cannot be compensated from the new bond formation between water and iodine.

So iodine is dissolvable in organic solvents as there is no question of hydrogen bond breaking.

Also, iodine does not conduct electricity because of the non-availability of any mobile delocalized electrons.

We can conclude from all the above-mentioned facts that I2 is non-polar in nature. The reason for this lies in its property of equal sharing of electrons between two iodine atoms to gain stability. Also due to the same electronegativity and linear structure, there is zero net dipole moment making I2 non-polar.

If you have any questions regarding the polarity of iodine. Feel free to ask them with your valuable comments, I will answer them for sure!