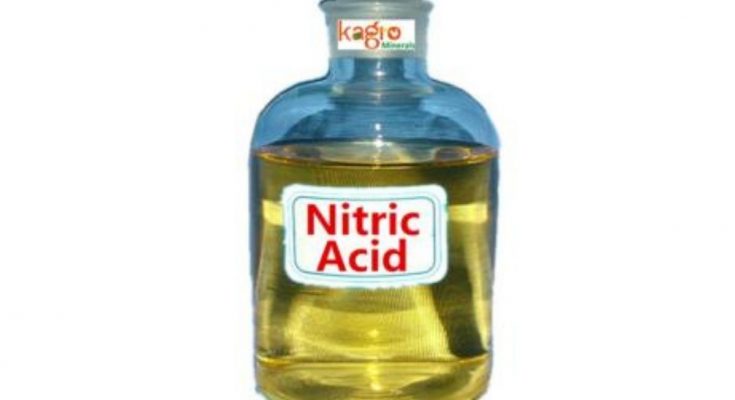 If we as students understood that everything we are, do, and see around us is a part of chemistry, we would probably pay more attention instead of simply enduring the classes.

Ever wondered what makes an acid an acid?

So, an acid is a chemical substance that donates hydrogen ions. It typically has a pH level below 7. However, acids are further divided into two categories: weak and strong, based on their reactivity.

Today we are going to talk about nitric acid (HNO3). Alchemists from circa.721 widely used Nitric acids (HNO3) without even knowing their chemical properties.

Following this statement, through various experiments, it has been found by the scientists that HNO3 fully dissociate in water which makes it eligible to be a strong acid.

Since this compound is a strong acid, it is highly corrosive and toxic.

Contents show
Why HNO3 is a Strong Acid?
1. The polarity of the H-X bond
2. Bond strength of the H+ and anion
3. Conjugate base formed
What is HNO3?
Chemical Properties of HNO3
Acidic Properties
Nitrating Properties
Oxidizing Properties
Reactions with Non- Metals
Usage of Nitric Acid
Conclusion

Why HNO3 is a Strong Acid?

The property of strong acids to dissociate completely in water makes the water acidic. But why does this occur? Why strong acids like HNO3 happen to break completely and weak acids just partially?

This is because of a few chemical properties of acids like polarity, bond strength, and stability of the conjugate bases.

These factors vary in different acids, and thus, their dissociation level differs.

1. The polarity of the H-X bond

The following equation shows how dissociation happens in HNO3.

2. Bond strength of the H+ and anion

The bond strength of an acid is inversely proportional to the dissociative of the acid in water. Therefore, the weaker the bond strength, the easier it is to separate them into ions.

Thus, due to the weak bond strength between the hydrogen ion and NO3, they get dissociated easily. This bond length is dependent on the size of the anion atom.

Since NO3 is larger than other anions, it is easy to break the bond.

Conjugate bases are those which form after removing the H+ ion from the compound. If this conjugate base is stable, then the acid is more likely to dissolve better in water.

Therefore, in other terms, the stability of the conjugate base is directly proportional to the acidity of the compound.

In HNO3, the conjugate base is NO3-. Due to its high stability, the acid formed by it is completely dissoluble in water. 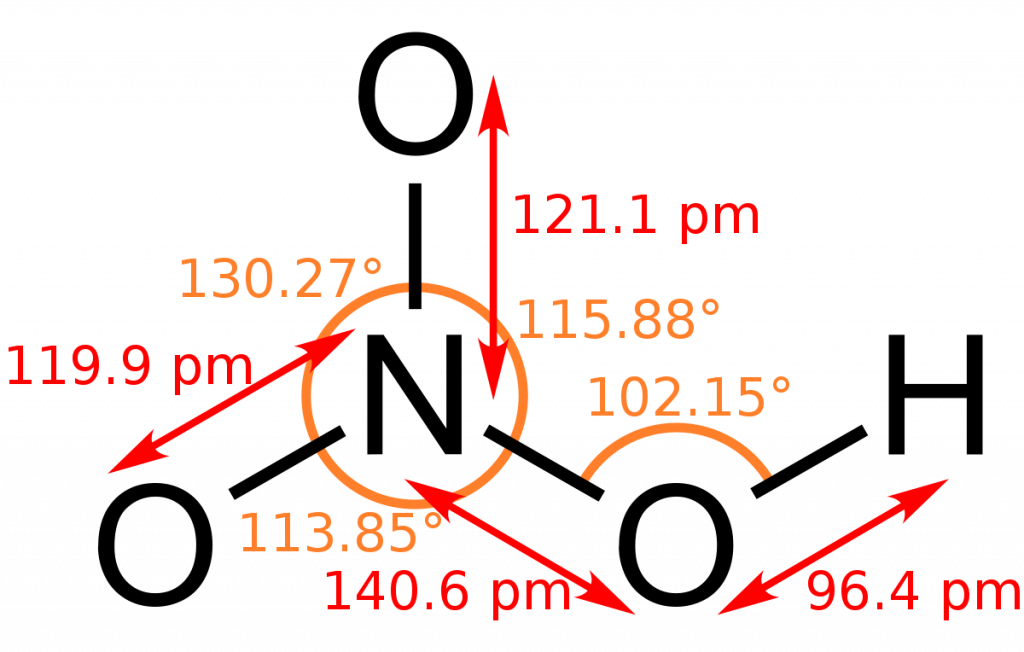 HNO3 is the chemical name of nitric acid. It was named Aqua Fortis in Latin, which means strong water. Since the chemical properties of nitric acid were not known in ancient times, there was just a sense that it is strongly acidic.

Later in 1784, its chemical nature and composition were first discovered by the British scientist Henry Cavendish. Nitric acid is a colorless compound, and in naked eyes, it looks just like water. However, with time, due to its decomposition to oxides of nitrogen and water, it takes a yellowish complexion.

The compound of nitric acid consists of three oxygen atoms, one nitrogen atom, and a hydrogen atom. These atoms are combined with one double bond and 3 single bonds.

The NO3- is bonded with the hydrogen atom with a weak single bond which breaks easily when its aqueous solution is reacted with water.

The net charge on the nitric acid molecule is considered as 0, and the individual charges in this molecule can be out-posted through resonance.

I have written an article specifically related to this. Go and check out the Lewis Structure of HNO3.

Anhydrous nitric acid can undergo decomposition if stored above 0 degrees Celsius. The decomposition begins when you start boiling it at room temperature in the presence of light.

Then, it decomposes while leaving behind nitrogen dioxide, water, and oxygen molecules.

Nitric acid reacts vigorously with alkalis, basic oxides, and carbonates to give salts. This type of neutralization reaction occurs between strong nitric acid and strong bases or basic oxides.

The oxidizing nature of nitric acid resists it from donating protons when reacted with metals.

As a result, salts thus formed are generally of a higher oxidizing state. Due to this foresaid reason, this chemical reaction is highly corrosive.

For example, when HNO3 vapor is passed through methane (CH4) in the presence of Copper as a catalyst, nitro-methane is formed.

Therefore, it is widely used in various industries to nitrate hydrocarbons for various purposes.

Nitric acid being a potent oxidizing agent, can react violently with metals, and these reactions can be highly explosive.

Various end products are possible with nitric acid at different concentrations, temperatures, and reducing agents. Nitric acid can react with all the metals, with a few exceptions of alloys.

This is the reason why it is widely used in acid tests.

The degree of oxidation in nitric acid depends upon two factors: the concentration of the acid and the nature of the element.

The lower the concentration level, the higher will be the oxidation. The element with which HNO3 will react must be highly reactive to give greater oxidation.

Nitric acid is reacted with copper to obtain various other nitrogen-based compounds. For example, Cu reacts with HNO3 to give Nitrogen Dioxide ( NO2) and produce nitrogen oxide (NO).

Nitric acid also reacts actively with all the non-metals except for nitrogen, oxygen, halogens, silicon, and noble gases.

HNO3 oxides the non-metals to the highest oxidation state as acids.

Nitric acid is a beneficial compound with many industrial uses. For example, it is also a component of acid rain.

In addition, Nitric acid is used in school laboratories to make students understand its chemical properties. Other than this, it is only used in industries.

HNO3 or nitric acid is one of the most useful chemicals among all the others. However, in most cases, it is not accessible to you in ordinary shops due to its toxicity.