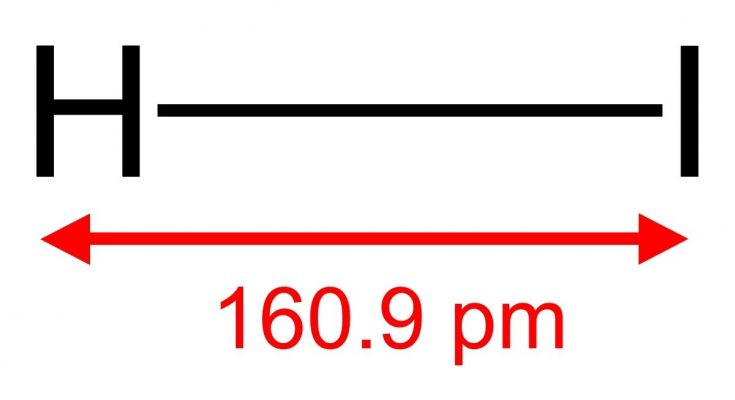 HI is referred to as hydrogen iodide, which comes under the family of Hydrogen Halide, HX, where X is a halogen i.e., F, Cl, Br, and I.

We can convert hydrogen halide to hydroiodic acid and vice versa and hence, they are interconvertible.

Let us study the important characteristics of HI i.e., its acidity.

The pKa of hydroiodic acid is -9.3, which makes it a strong acid.

The Hydrogen iodide is prepared by the following reactions.

The hydrogen iodide is a very useful reagent and hence, produce useful products by the following reactions:

Let us elaborate on this explanation for the strong acidity of hydroiodic acid or hydrogen iodide.

Before that, we need to understand the basic concept i.e., what is acid or base? ACID AND BASE.

Various scientists put different theories for defining acids and bases. Out of them, three theories have been accepted widely, namely, Arrhenius Theory, Bronsted-Lowry theory, and Lewis Theory of Acids and bases.

Let us start our discussion with the definition of acid and base via different perspectives of different scientists.

Arrhenius Theory of Acid and Base

According to Swedish Svante Arrhenius, acids are substances, which can easily donate their protons (H+) in water. For example Hydrochloric acid (HCl), sulphuric acid (H2SO4), and phosphoric acid (H3PO4).

This theory is based on the ionization of substances in water and hence, it is valid only for substances, which are soluble in water only. Hence, it does not cover all substances present in nature.

For example, ammonia is a base but it cannot donate hydroxide ions in water. Here, Arrhenius’s theory fails to explain its basicity.

Similarly, there are various examples in the literature, where we can see that Arrhenius’s theory does not work.

Afterward, two theories i.e., Bronsted-Lowry theory, and Lewis Theory, came simultaneously in 1923 to explain the acidity and basicity of substances, which are not covered by Arrhenius theory.

Bronsted Lowry Theory of Acid and Base

It is also known proton theory of acids and bases as it explains acidity and basicity depending on their capability to lose protons or accept protons, respectively.

Here, the bases are proton acceptors whereas bases are hydroxide donors as per Arrhenius Theory.

Bronsted acid becomes a conjugate base after donating its proton. However, the Bronsted base becomes conjugate acid by accepting protons.

Apart from protons, we can also distinguish acids and bases on the basis of their tendency to donate or accept electrons, which is given by Lewis.

Lewis theory of Acid and Base

According to Lewis, acids are electron-deficient species, which can easily accept an electron from another species.

However, Lewis bases are electron-rich or electron donor species.

Why HI is Acid?

In the case of Hydrogen Iodide (HI), it has a proton for donation. Hence, it is acid as per the Arrhenius theory as well as Bronsted theory.

Whether HI is a strong acid or weak acid, depends on their tendency of losing proton i.e., how easily it donates a proton.

Let us introduce the concept of the strong and weak acid.

For example, acetic acid (CH3COOH) shows equilibrium with its ions, and hence, it is a weak acid.

It does not dissociate completely in water and shows a reversible reaction with it.

Hydrogen iodide dissociates completely in the solution and hence, it is a strong acid.

What are the factors which affect the acidic strength of the acids?

Factors affecting the acidic strength of the acid (HX)

Let us discuss these factors one by one in the context of hydrogen iodide (HI).

Electronegativity of the atom (X)

If the hydrogen atom is attached to the more electronegative atom, then it is more acidic.

The electronegativity value of iodine and hydrogen is 2.66 and 2.20, respectively, on the Pauling scale. Hence, hydrogen iodide is a strong acid.

Size of the atom (X)

As the size of the Iodine atom is quite large as compared to the hydrogen atom, it makes the H-I bond larger as well as weaker.

Therefore, hydrogen iodide easily donates its proton, which makes it a strong acid. 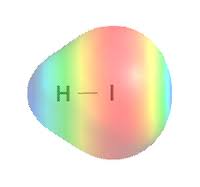 If the molecule is more polar, then electron density will shift towards a more electronegative atom.

It makes the H-X bond weaker and hence, it requires less energy for breaking this bond. It leads to an increase in the acidic strength of the molecule.

In the case of HI, the electronegativity difference of the hydrogen and iodine atom is 0.46. Therefore, the H-I bond is polar and there will be a dipole pointing towards the iodine atom.

Now, the H-I bond is weaker and it will be broken by minimum energy supply. Therefore, the H I bond will easily dissociate in the water.

In this article, we have discussed the acidity of Hydrogen iodide, which is gas at room temperature and atmospheric pressure. However, the hydroiodic acid i.e., an aqueous solution of hydrogen iodide, is liquid at standard condition.

The acidity of the acid (HX) depends on the electronegativity of X as compared to the hydrogen atom, size of the X atom, the polarity of the HX molecule, and strength of the H-X bond.

All these factors contribute towards the strong acidity of hydrogen iodide or hydroiodic acid. Thanks for reading the article.

Suggestions are most welcome.