Whenever we study chemical compounds, one of the first classifications we come across is acids and bases. There are many types of criteria available to classify a given substance as acidic, basic, or neutral. Today we will discuss the nature of HF.

So is HF a strong acid? HF, or hydrofluoric acid, is not a strong acid. It is weakly acidic because it does not completely dissociate in water due to the extremely strong H-F bond. Fluorine has a strong affinity for hydrogen atoms that take a large amount of energy to break the H-F bond.

Let us look at this in details.

There are many definitions for an acid, however, let us consider the simplest one. According to Arrhenius, an acid is a substance that increases the concentration of H+ ions in a solution.

This means that an acid furnishes H+ ions in an aqueous solution by dissociating into H+ions and the corresponding conjugate base.

For example, in the case of HF: HF + H2O ⇆ H3O+ + F-, here HF gets ionized into H+ and F ions, and the H+ ions form a coordinate bond with another water molecule to yield H3O+ions in solution. The higher the concentration of H3O+ ions, the stronger the acid.

So, naturally, those substances in which the bond between the conjugate base and H is easier to break will be the stronger acid.

Typically, there are 3 main types of definitions for acids and bases.

The first definition, as we saw above, is the Arrhenius theory of acids and bases.

The greater the increase in concentration, the stronger the acid or the base.

Brønsted-Lowry concept of acids and bases

This theory identifies acids and bases based on the transfer of protons between these species.

This means that for a substance to be a Brønsted acid, it must contain hydrogen atoms that can dissociate as H+ions. Further, after the H+ion comes into the reaction mixture, the base must contain a lone pair of electrons to donate to the H+ion to form a bond with it.

In the above reaction, HCl donates its proton to the ammonia molecule, to form ammonium chloride.

Therefore, here HCl is the Brønsted acid and ammonia is the Brønsted base since it is accepting the donated proton by donating its lone pair present on nitrogen to form an N-H bond.

Interestingly, according to Arrhenius’s theory, the above reaction would not be an acid-base reaction because the reaction mixture does not contain H+ or OH- ions.

Since the Brønsted concept focuses only on the proton-donating or accepting capacity of a substance, Lewis proposed an alternative definition for acids and bases.

This theory helps us to classify compounds as acids or bases even when they don’t have protons to donate or accept, or are not available as aqueous solutions, like solids and gases.

Since a lone pair of electrons is being donated and accepted, it is evident that a Lewis acid must have a vacant molecular orbital to accept electrons.

Examples of Lewis acids include metal cations such as Cu2+, Fe2+, Fe3+, compounds with incomplete octets like BF3 and AlF3, etc.

Examples of Lewis bases include OH−, CN−, CH3COO−, :NH3, H2O: , CO: and other species which contain lone pairs of electrons.

Why is HF a Weak Acid?

Let us now take a deeper look at HF. HF or hydrofluoric acid is a weak acid. It is an acid because it ionizes in solution to furnish H+ions as follows:

Now, we know that fluorine is the most electronegative element in the periodic table. This indicates that the H-F bond is extremely polar.

So you might argue that because of high polarity, the HF bond must also be easy to break, and so HF must actually be a strong acid. But this is not the case.

Recall the trend of the atomic radius in the second row of the periodic table. As we know, across a period, the number of shells of the elements remains the same, but the number of electrons keeps increasing as we go from left to right.

This means that, for an element located on the right, its electrons face a greater force of attraction from the nucleus and hence get pulled inwards.

Now, when HF ionizes in an aqueous solution, it forms Fluoride or F-ions. Fluoride ions are formed when fluorine takes up an electron and acquires a negative charge. Also, fluorine is the smallest of all the halogens as it lies on top of group 17 of the periodic table. 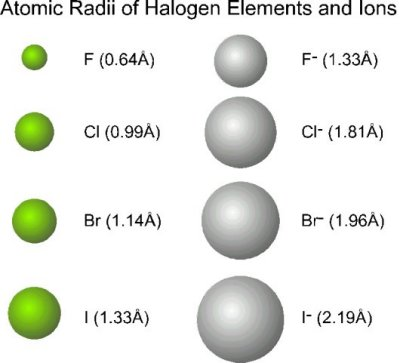 So an F-ion is extremely unstable because of its extremely small size. Because of its size, the incoming electron faces a huge amount of repulsion from the other electrons, and therefore, fluorine will prefer to not form a fluoride ion at all.

Earlier, we said that for acid to be a strong acid, its conjugate base must be stable.

Here, since F-ion is the conjugate base, and it is very unstable, the HF molecule will prefer to stay in its un-ionized form.

Further, since the fluorine atom is very small, its bond with hydrogen is a very strong bond. 1s orbital of hydrogen and 2p orbital of fluorine share electrons to form the HF molecule.

Contrary to that, HCl has a 1s-3p overlap, HBr has a 1s-4p overlap, and so on. These bonds are all weaker than the 1s-2p strong overlap present in HF so the HF bond is very difficult to break.

Therefore, HF is a weak acid.

Also, the pH of 0.1M of HF is approximately 2.12. Compared to that, HCl has a pH of 1.08 for the same concentration of acid, and this indicates that HCl is a much stronger acid than HF. However, HF is also a very corrosive acid.

Factors Affecting Acidity of a Compound

The more electronegativity difference there is, the easier the H-X bond will be to break. So, for example, acidity order: HF>H2O>NH3>CH4 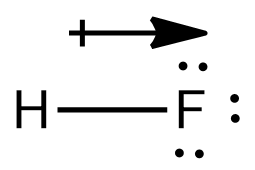 2. Size of the X atom: When the X atom is smaller in size, the extent of overlap of the orbitals of H and X is increased. So, the H-X bond becomes tougher to break apart.

As the size of X increases, the H-X bond becomes weaker and can be easily broken to give H+ions. For example, the acidity order:

3. Charge on the acid or base molecule:

As the charge on the molecule increases, the molecule becomes more basic and less acidic. For example, the acidity order:

These acids are formed by those elements which can show a range of different oxidation states. For example, acidity order:

In today’s lesson, we learned that how various compounds are classified as acids or bases according to various theories.

We focused primarily on HF and explored how it is a weak acid. Further, we learned about the pH of HF and about the various factors that affect the acidity of a compound.

I hope it was a fulfilling lesson.