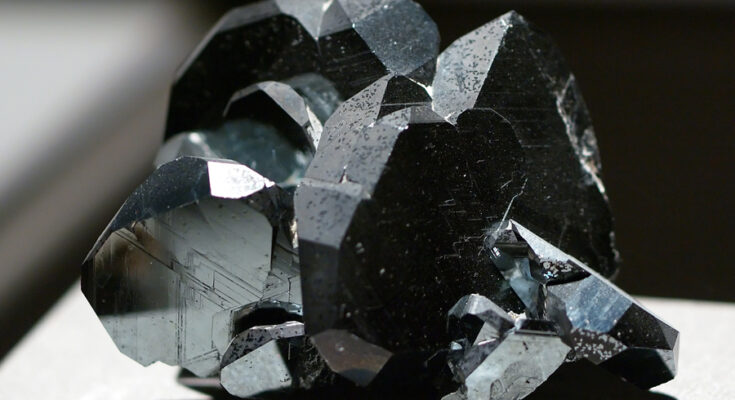 Hematite is a naturally occurring substance also can be classified as an ore of iron which is considered to be one of the most abundant minerals available on the surface and in the shallow crust of the Earth. Pure hematite consists of 70% iron and 30% oxygen by weight. It might be interesting to realize that having such a high percentage of iron makes hematite a ferromagnet.

Contents show
Is Hematite Magnetic?
What is Antiferromagnetism?
What is Morin’s Temperature?
What is the Neel Temperature?
Why Hematite is Magnetic?
Magnetism in Hematite
What is Ferrimagnetism?
Hematite and its relationship with temperature
Magnetic Susceptibility of Hematite
Some Related Questions
Conclusion

So, is hematite magnetic? Yes, hematite being an iron ore is magnetic in nature. It is antiferromagnetic in nature below the Morin transition ie; approximately at 250 K. And it acts as a weak ferromagnet above the Morin transition and Neel temperature, which is approximately 948 K. In addition to this, hematite above the Neel temperature is a pure paramagnet.

Let us check more about this in detail.

It is the presence of oxygen atom and other elements that changes the extent of magnetism in hematite.

Otherwise, it would have been a strong ferromagnet due to the presence of iron in a large quantity.

It might be interesting for you to understand that irrespective of being iron ore, hematite is an antiferromagnet. Hematite is weakly magnetic which after a certain point becomes a paramagnet.

Antiferromagnetism is opposite to magnetism where an element possesses magnetism only for a certain period, usually at lower temperatures, but vanishes at and after reaching Neel temperature.

The atomic spin is aligned in opposite direction to the neighboring spins.

This property usually occurs in transition metal compounds like hematite.

What is Morin’s Temperature?

Within the hematite, it is the temperature at which a magnetic phase transition occurs where antiferromagnetic structuring is reorganized. This change in the structure alters the magnetic property of the hematite.

Morin temperature is one where the crystal lattice of an atom reorganizes completely because of which a change in the magnetic property of the hematite occurs.

Morin’s temperature for hematite is 260 K for Fe3+ 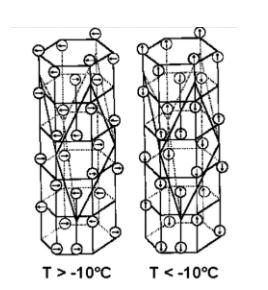 In the first structure where the temperature is above minus ten degrees Celsius, the spin moment or directions are slightly canted. It induces weak magnetization within the hematite.

Besides this, below minus ten degree Celsius, again the direction of antiferromagnetism changes where no spin canting takes place. Due to this hematite becomes an antiferromagnet.

What is the Neel Temperature?

It is named after Louis Neel, who first discovered this behavior possessed by various elements.

The Neel temperature is also called Magnetic Ordering Temperature, at or above which an antiferromagnetic material becomes a paramagnet.

It happens when the thermal energy gets bigger enough to break the microscopic magnetic ordering within the element. 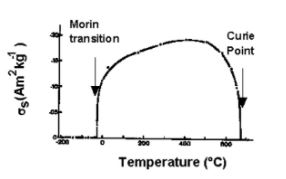 Why Hematite is Magnetic?

When there is no external applied magnetic field, the antiferromagnetic behavior of hematite vanishes completely.

Whereas, in the presence of an applied external magnetic field, hematite acts as a ferrimagnet where the values of sublattice magnetization differ, creating a net magnetization overall.

We will discuss this in detail under the ferrimagnetism heading.

Ferrimagnetism is a property through which elements show paramagnetic behavior.

As we know electrons in pairs, within each atom spins in opposite directions to one another to cancel the overall net dipole moment.

Ferrimagnetism, however, is one property where the atoms within an element has opposite magnetic moment creating a non-zero net magnetism.

This behavior occurs when an element has different ions.

Hematite and its relationship with temperature

The chemical formula of hematite is Fe2O3 whereas the electronic configuration of iron and oxygen are:

From the electronic configurations of iron and oxygen, it can be figured out there will be a deficiency of paired electrons which promotes paramagnetic behavior in hematite.

It makes hematite to be quite responsive to temperature.

At very low temperatures, it generates no response to an applied external magnetic field. It is because the antiparallel ordering of the atomic magnet is held rigidly.

Furthermore, at a bit higher temperature, some of the atoms break free and comes in alignment with the applied external magnetic field.

Above Neel temperature, the continual thermal energy does not allow hematite atoms to align with the applied external magnetic field.

Due to this, the property of weak magnetism starts to decrease with the increase in the temperature. 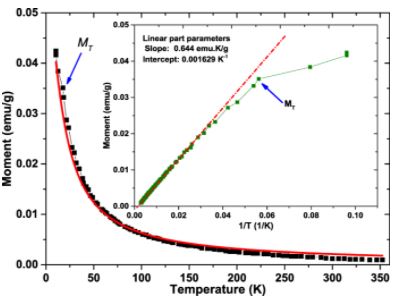 The graph is evaluating for weak ferromagnetism in hematite by analysing the relationship between magnetic moment and temperature. 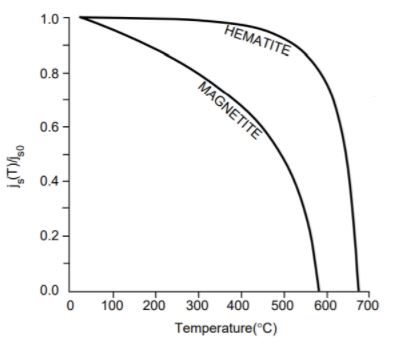 The graph is in between normalized saturation magnetization and temperature for hematite and magnetite.

The graph shows the saturation magnetization for hematite at room temperature is j s 0 ≈ 2 G.

The magnetic susceptibility of an antiferromagnetic element like hematite is maximum at the Neel temperature. Whereas, while converting to paramagnetism, susceptibility changes, but not much.

The magnetic susceptibility of hematite forms a hysteresis curve. 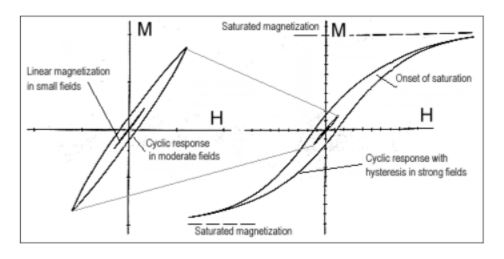 For hematite, this curve determines the relationship between the magnetic flux density and the magnetizing force.

How does a hysteresis loop look? 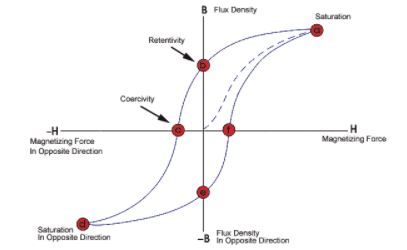 What is magnetic anisotropy?

Anisotropy is a property through which an element exhibits varied physical properties because of different molecular axes.

This gives birth to magnetic anisotropy which is based on the fact that the spin of the atom is not in alignment with the applied external magnetic field.

It is interesting to realize that magnetic anisotropy is a property of strong magnets or ferromagnets. Yet, hematite is showing it.

What is exchange coupling for antiferromagnets?

The antiferromagnets undergo antiparallel coupling where atomic spins are in opposite directions to one another. The overall net magnetization of an antiferromagnetic element is generally zero.

What is the crystal structure of Hematite? 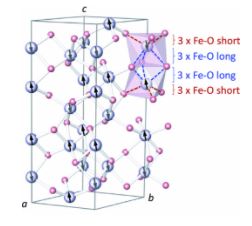 The chemical formula of hematite if Fe2O3. From the above image it can be seen that the structure is well organized and binded because of which a good thermal energy is required to make the atoms move from its place and go to another to change the overall structure along with properties.

You can also read the article related to magnetism in iron.