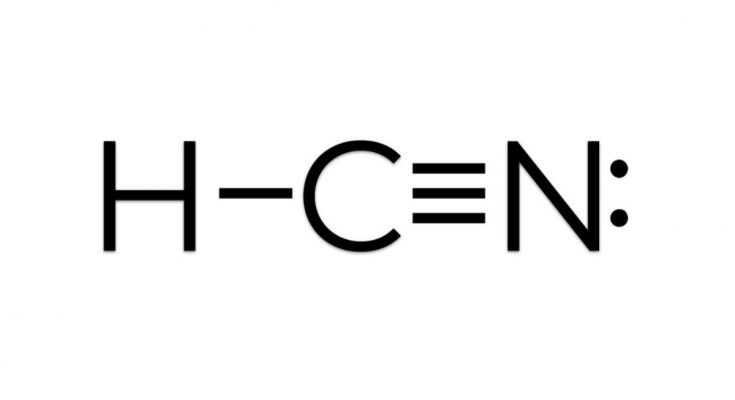 Hydrocyanic acid is also known as Formonitrile or Prussic acid is a colorless gas or liquid that has the faint smell of bitter almonds. It has a molar mass of 27.0253 g/mol.

It is a flammable liquid and is commercially produced by reacting ammonia with methane, and air over a platinum catalyst. It has a melting point of −13.4°C and a boiling point of 25.6°C. It is a one-carbon compound that consists of a methine group connected with a nitrogen atom through a triple bond.

So, is HCN a strong acid? HCN is a weak acid as it does not completely dissociate in a solution and furnishes a very small amount of H+ ions in a solution. The cyanide ion (CN-) binds strongly to its proton making the ionization difficult. The value of acid dissociation constant for HCN is 6.2 X 10-10 and that of the logarithmic constant for HCN is 9.2 while for strong acids the Ka value reaches infinity and the pKa value shall be below 2. The pH of 0.1M HCN solution is 5.2 further indicating it to be a weak acid.

HCN is used in the manufacturing of nylons, plastics, and fumigants. Sodium nitroprusside (Na2[Fe(CN)5NO]·2H2O) when administered intravenously is proven to lower blood pressure.

HCN is highly poisonous in nature and acts very rapidly. It is a systemic poison that acts through inhibition of cytochrome oxidase activity which prevents utilization of oxygen for cellular activities.

Prolonged exposure may even result in death due to respiratory arrest. However, the exposure to HCN is limited to industrial situations or cigarette smoke and combustion products. Normally, it is not considered corrosive.

Contents show
Strong and Weak Acids
Why is HCN a Weak Acid?
Why are acids weak or strong?
Factors that determine the strength of an acid
Calculating values of Ka and pKa for acids
Conclusion

The acid that almost completely dissociates or ionizes in an aqueous solution is referred to as strong acid. They have a strong tendency to lose a proton. This proton together with water molecule forms hydronium ion:

Strong acids have a high value for acid dissociation constant (Ka) and a low value for logarithmic constant (pKa). For example, the Ka and pKa value for HCl is 1.3 X 106 and – 6.3, respectively.

Weak acids, on the other hand, only partially ionize in a solution. Their strength is estimated from dissociation capacity.

Weak acids do not easily lose their proton and even tend to take it back from the solution, therefore their reaction is written as:

This can also be seen in the case of HCN where CN- ion is so closely associated with its proton that in a solution it reforms the HCN molecule as soon as it comes in contact with a proton hence, not allowing complete dissociation of the acid in the solution.

Why is HCN a Weak Acid?

Looking at the dissociation equation for HCN in an aqueous solution, it can be represented as:

The cyanide ion is a good base and easily takes up the proton thus reforming the acid molecules which were earlier ionized in the solution.

Moreover, the carbon atom in CN- is sp hybridized (triple bond) and the nitrogen atom is only slightly electronegative further confirming that HCN is a weak acid.

Also, cyanide ion is isoelectric in nature. The negative charge in CN- is more concentrated towards the carbon atom due to which it binds more strongly to the proton again making the dissociation harder.

Why are acids weak or strong?

The ionization of an acid in an aqueous solution depends on its polarity which in turn is dependent on the distribution of electrons in a chemical bond.

As we already know that the polarity of a molecule depends upon the difference in electronegativity of atoms that combine to form that molecule.

The larger the difference in between the electronegativity of two atoms the higher is the polarity of a molecule due to the separation of charges on the chemical bond. 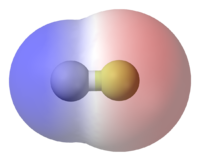 Hydrogen carries a slightly positive charge when associated with an electronegative atom.

If the electron density around hydrogen diminishes i.e. the electronegativity difference is larger, the hydrogen ion tends to dissociate from the molecule thereby making it a strong acid.

On the other hand, when the electronegativity difference between the hydrogen ion and other associated ion is lesser like in the case of HCN, the hydrogen ion does not easily dissociate from the molecule resulting in the formation of strong acids. 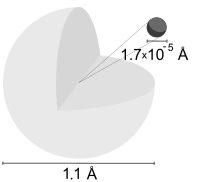 As the size of the other atom increases the potential of the bond decreases which makes it easier for hydrogen ions to dissociate from the molecule, hence producing a strong acid.

Factors that determine the strength of an acid

The larger the electronegativity difference more is the polarity that makes the dissociation of ions feasible, which is a characteristic of strong acids.

For example, in the case of Hydrochloric acid, Chlorine is highly electronegative, which attracts the electrons involved in the chemical bond towards itself.

Therefore, when dissolved in an aqueous solution hydrogen ion easily attaches itself to the water molecule hence forming hydronium ion.

As the difference between the atomic radiuses of two atoms combined to form a molecule increases the chemical bond between them tends to become weak resulting in easy dissociation of ions consequentially forming strong acids.

• Solvent: The acidity and basicity have different meanings when it comes to non-aqueous solutions.

However, the strength of an acid is usually measured in an aqueous solution.

• Equilibrium: The equilibrium is reached with the conjugate base of acid after the dissociation of acid in an aqueous solution (to whichever extent possible) is over.

In the case of strong acids, the equilibrium is more inclined towards the product.

However, even the conjugate base of a strong acid is weaker than water as a base.

The acid dissociation/ionization constant represents the degree to which the acid has been ionized in the solution.

The weak acids have a lower value of Ka and vice versa. The strong acids like HCl and H2SO4 almost completely ionize in water due to which their Ka value reaches infinity.

Ka is often expressed in terms of logarithmic constant (pKa), the value of which is equal to -log10(Ka).

The larger value of pKa represents lesser dissociation and in turn weaker acid.

The strong acids usually have their pKa value below -2 while weak acids have pKa values between -2 to 12. It is the measure of the extent of dissociation of an acid in a solution.

Calculating values of Ka and pKa for acids

As discussed above the strength of an acid is measured by its readiness to give away a proton or form hydronium ion in an aqueous solution.

The strong acids easily donate their hydrogen ion while weak acids only dissociate partially in a solution.

The numerical value of Ka and pKa represents the strength of an acid. For monoprotic acid, it is calculated as:

The value of Ka can also be derived from pH, which is the measure of the concentration of free hydrogen ions in a solution.

It is represented as

If the molar concentration acid solution is known, pH can be measured then the Ka value for the solution can be calculated using the above equation.

• HCN is a strong acid as it does not completely dissociate in an aqueous solution.

• Strong acids easily give away their proton in an aqueous solution while in weak acids protons are bound more strongly.

• A number of factors play role in determining the strength of any acid. They are Electronegativity, atomic size, electrical charge, solvent, and equilibrium.

• The acidity or acid strength can be measured in terms of Ka or pKa values which are calculated by the formula :