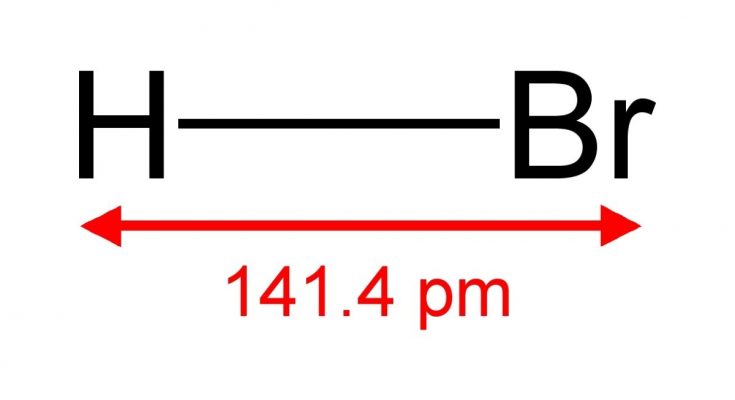 Hydrogen Bromide is an inorganic hydrogen halide compound with the molecular formula HBr. It is a colorless gas with a strong odor. Exposure to this gas can cause asphyxia (suffocation) and irritation if inhaled. Hydrogen bromide is highly soluble in water and weighs heavier than air.

In this article, we’ll look at whether Hydrogen bromide (HBr) is an acid or a base.

Let us study it in detail. Stay Connected till last.

Hydrobromic acid (HBr) is a powerful acid that will entirely dissociate in water into H+ and Br-.

In order to determine the pH of 1mM solution of hydrobromic acid, the concentration will be 1 millimole (0.001 moles) of H+ ions in the solution.

The formula for calculating pH is as follows:

To calculate the ph of a compound using the above formulae, put the value of the concentration of H+ ions as below.

pH = 3 where a pH of 3 indicates that the compound is more acidic in nature.

The pH value can be positive, negative, or even zero. For example, if the pH of 1M of HBr solution is calculated, -log(1) becomes zero and it is also regarded as a strong acid. 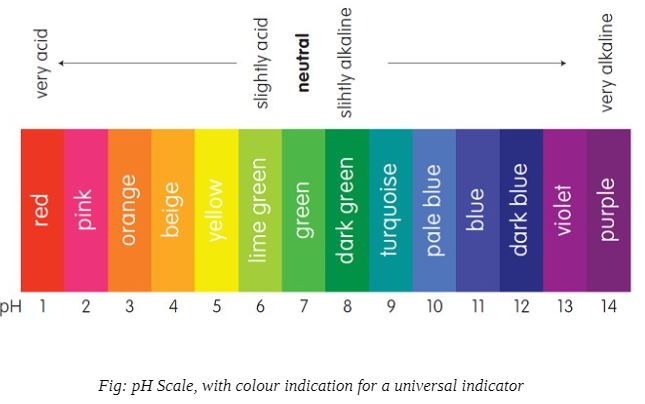 Why is HBr a Strong Acid?

A strong acid is one that totally dissociates into its ions when it comes into contact with water.

As HBr completely dissociates in an aqueous solution it is regarded as the strong acid. Below is the 3-D shape of the HBr molecule. 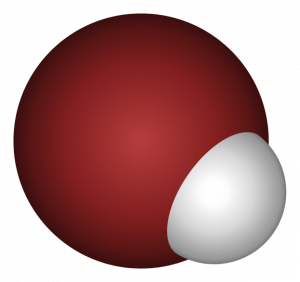 In order to justify it according to the laws of chemistry, we have to analyze the famous theory given by Arrhenius for the acidic compounds.

According to this idea, a substance is acidic if it produces H+ ions when dissolved in water and forms H3O+ ions when combined with the water molecule.

Sometimes the H+ combines with the H2O molecule when dissolved in water and forms hydronium ion (i.e) H3O+ ion

In addition, according to Arrhenius, an acid is a substance that increases the concentration of hydrogen ions (H+) in a solution.

When the HBr compound is dissolved in an aqueous solution, it releases one H+ ion, increasing the hydrogen ion concentration in the final solution. As a result, the HBr compound satisfies all of the Arrhenius acid compound’s requirements.

Therefore, we can call HBr an Arrhenius acid compound.

There is another major acid-base theory that has to be verified, which is the Bronsted-Lowry theory.

According to this idea, a substance becomes an acid when it gives a proton to another species and forms a conjugate base.

When a compound receives a proton from another species and creates a conjugate acid, it is classified as a base.

Here in HBr, it donates a proton to another species and forms a conjugate base (Br-).

As a result, we can call HBr a Bronsted-Lowry acid compound.

To determine if a compound is a strong acid, it must have the following characteristics:

They must have high conductivity and are powerful electrolytes.

Their pH value ranges from 1 to 3 or even 0 and negative.

They totally disintegrate and release a huge amount of H+ ions into the solution.

As HBr pertains to all the above-mentioned characteristics, it is regarded as a STRONG ACID.

What is the Conjugate Base of HBr?

An acid is a proton donor in Bronsted-Lowry theory, while a base is a proton acceptor. As a result, in the example of HBr, which reacts with water according to the equation below;-

Because a conjugate base in Brnsted-Lowry theory is whatever is left over after a proton has reacted with a base, the conjugate base of HBr is the Br- ion.

A conjugate base always has one less hydrogen atom and one more negative charge than the original acid, according to a simple rule of thumb.

A conjugate base can also be regarded as an anion.

Is HBr More Acidic than HCl?

The strength of an acid depends on two main criteria:

The higher the degree of dissociation, the higher is the acidity.

The H–Br bond is, therefore, weaker than the H–Cl bond, thus they easily dissociate in an aqueous solution. HBr is stronger than HCl, as HBr has a higher degree of dissociation.

Moreover, when the atomic size increases, the electronegativity of the atom decreases. While dealing with acidity,

In the periodic table, the electronegativity of elements increases along the row as we move from left to right.

And when we move down the group, the electronegativity of elements decreases because atomic size keeps on increasing.

Therefore, in the halides group of atoms, Br is less electronegative than Cl. Thus HBr is a strong acid when compared with HCl.

Is HBr Lewis Acid or Base? 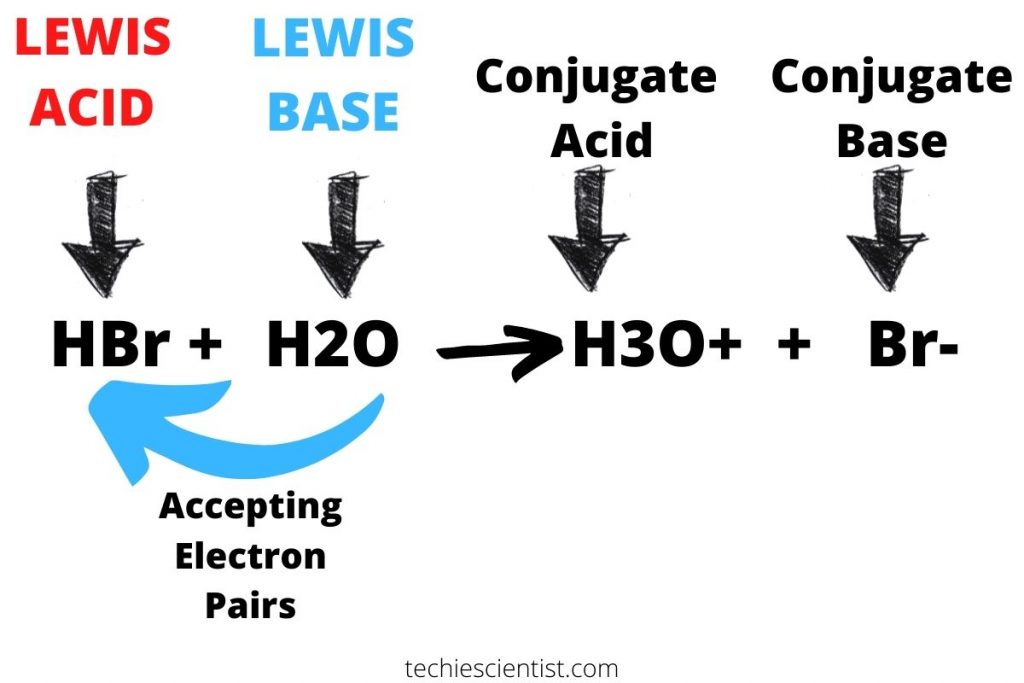 When a compound obtains a pair of electrons from another compound, it is known as a Lewis acid molecule.

When a compound provides a pair of electrons to another compound it is known as a Lewis base compound.

Here in HBr, as it accepts one lone pair of electrons when combining with a water molecule and forms hydronium ion and Br– conjugate base, it is regarded as a Lewis acid.

While taking a deep look into the theory of lewis acid with HBr molecule, bromine is more electronegative than hydrogen and has three lone around it, so it attracts more electrons.

The hydrogen atom was drawn slightly by the lone pair on the water molecule (H2O), while the negative charge of the Bromine atom repelled more electrons.

A coordinating link between oxygen and hydrogen is also formed, resulting in the formation of the bromine ion.

As a result, the entire HBr molecule behaves as a Lewis acid, receiving the lone pair of electrons from H2O and breaking off the Bromide ion in the process.

The above explanation justifies the statement that HBr is a lewis acid.

1. The most common uses for elemental bromine are as a cleaning or disinfecting agent and as a chemical intermediate.

2. In a number of organic reactions, it is used as a reagent and as a catalyst.

3. It’s used to make a variety of organic chemicals.

4. It is employed as a catalyst in the synthesis of PTA/PET, as an electrolyte for energy storage, and as a hydrobromination agent in a variety of organic processes (for Pharma and Agro applications).

5. Hydrogen bromide is used to make chemicals and drugs, as a solvent and as a veterinary drug.

6. A synthetic morphine derivative used as an antitussive (cough suppressant) in the form of hydrobromide salt.

• Anhydrous hydrobromic acid, which is delivered in high-pressure cylinders, is a toxic material.

• Hydrobromic acid is neither flammable nor explosive. It will emit poisonous hydrogen bromide fumes at high temperatures.

• Hydrobromic acid is corrosive to the eyes, skin, and mucous membranes.

Hydrogen bromide is a colorless, pungent-smelling inorganic compound that liberates H+ ions when dissociated in an aqueous solution. The above-mentioned theory of Arrhenius, Bronsted-Lowry and lewis explains and proves that

HBr is a strong acid with a pH of 3. In addition, the steps for pH calculation have also been discussed with a suitable example.

• HBr is acidic as it produces H+ ions when dissolved in water.

• It obtains a pair of electrons from another compound and so it is known as lewis acid.

I hope, this article has helped you to know in detail about the acidic nature of HBr and other attributes of this compound.