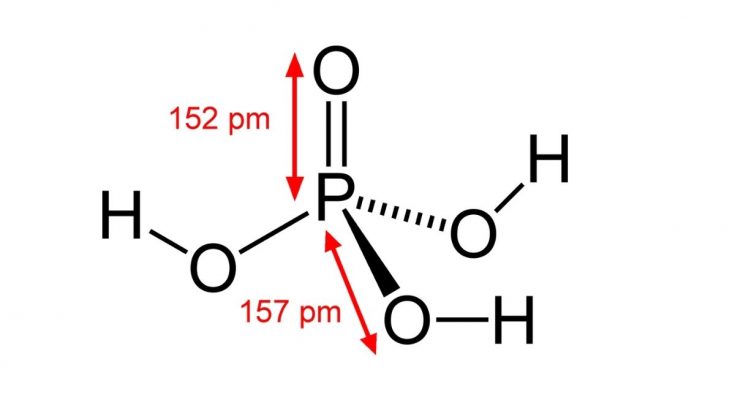 The commercial method of preparation of phosphoric acid is the wet process in which sulfuric acid gets added to phosphate rock in a chain of well-stirred reactors.

It appears as a colorless, odorless syrupy liquid or transparent crystalline solid. It has an important role as a human metabolite, detergent additives, fertilizer, sanitizing agent, and solvent; however, can severely damage skin and eyes too.

In this article, we will discuss some of the most searched questions related to Phosphoric acid-like

• Nature of strength (strong or weak)

• Acidity or Basicity of H3PO4

Strong acids have a lower pKa value (below zero). However, the pKa value of H3PO4 is around 2.14, again indicating it to be a weak acid with a lower ability to donate a proton in an aqueous solution.

Contents show
Why do H3PO4 act as an acid?
Is Phosphoric (H3PO4) a Strong Acid or Weak Acid?
Conjugate Base of H3PO4
Why is H3PO4 a weaker acid than H3PO3?
Basicity of H3PO4
Properties of H3PO4
Uses of H3PO4
Conclusion

Two major theories in chemistry that define acids and bases are-

When H3PO4 is dissolved in water, it breaks down into two constituent ions, H2PO4‾ and H+. So, according to Arrhenius’s theory, it acts as an acid.

When H3PO4 is dissolved in water, it donates one proton to the H2O to form a hydronium ion and itself becomes a conjugate base, H2PO4‾.

So, according to Bronsted-Lowry, it is an acid. 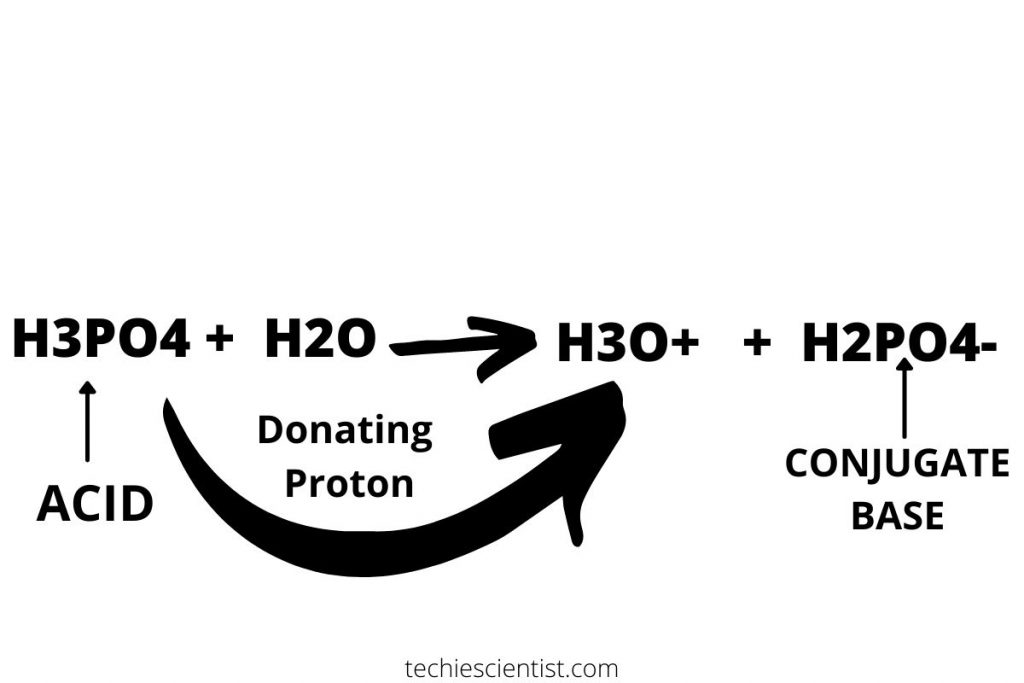 Is Phosphoric (H3PO4) a Strong Acid or Weak Acid?

Now is H3PO4 a weak or strong acid?

The dissociation of H3PO4 in aqueous solution is as follows:

First step: In this step, H3PO4 donates its one acidic proton to water and form H2PO4-

Second step: In this step, H2PO4− donates the second acidic proton to water to form HPO42− but H2PO4− is a weaker acid than H3PO4 (Weak acid has higher pKa value) so it is more difficult for H2PO4− to remove proton in aqueous solution.

Third step: In this step, HPO42− donates the second acidic proton to water to form PO43−.

Again, HPO42− is a weaker acid than H2PO4− and H3PO4 (indicating a higher pKa value of 12.37) so it becomes more difficult for HPO42− to remove the third acetic proton in an aqueous solution.

As the order of acidity decreases with each subsequent dissociation, the removal of acidic hydrogen becomes more difficult.

Moreover, all the above reactions are reversible (indicated by ↔).

It means that the reaction will undergo both forward and backward reactions.

After the dissociation of H3PO4 in an aqueous solution, H2PO4− reacts again with hydrogen ions to form H3PO4 because H2PO4− is less stable.

In this way, most of the moles of H3PO4 remain un-dissociated and it is considered a weak acid.

Conjugate Base of H3PO4

When an acid donates its acidic proton to another species in a reaction, it forms its corresponding conjugate base.

Similarly, when a base takes an acidic proton from another species in a reaction, it forms its corresponding conjugate acid.

According to the conjugate acid-base pair, the nature of the compound and its corresponding pair is always opposite in nature.

A strong acid always forms a weak conjugate base.

A strong base always forms a weak conjugate acid.

A weak acid always forms a strong conjugate base.

A weak base always forms a strong conjugate acid.

In the case of H3PO4, it forms H2PO4- (dihydrogen phosphate anion) as its conjugate base after removing an acidic proton.

Moreover, H3PO4 is a weak acid so according to the conjugate acid-base pair, its corresponding pair, H2PO4− is a strong conjugate base. 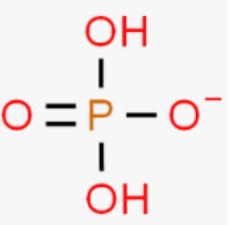 H3PO3 is a stronger acid than H3PO4 because of-

Experimentally calculated pKa values: pKa value of H3PO3 (1.3) is lower than H3PO4 (2.1) indicating the former to be a stronger acid.

The lower the pKa value, the higher is the acidic character of that compound. 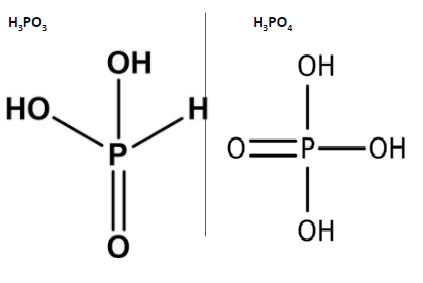 • P-OH bond: The more the P-OH bond, the lower the acidic strength of the oxyacid.

• Polarity: H3PO3 is more polar than H3PO4 hence, the O-H bond is weaker in the former causing the easy removal of H+ ion.

BTW, you must also read out the article on lewis structure of H3PO4.

Basicity is defined as the number of acidic hydrogen atoms present in an acid.

When the Hydrogen atom is bonded to a strongly electronegative atom like fluorine, oxygen, then only it is considered to be acidic.

In H3PO4, there are three O-H bonds or three acidic hydrogen atoms hence, it is a tribasic acid. 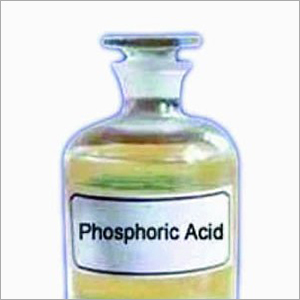 The oxidation state of Phosphorus in H3PO4 is +5 which cannot be oxidized further.

So, H3PO4 cannot be a reducing agent. It is a poor oxidizing agent.

H3PO4 can dimerize like carboxylic acids via dehydration reaction.

• It is used as a phosphate fertilizer.

• It is used as a sanitizing agent, dispersing agent, electrolyte, etc.

• It is used as teeth whiteners or mouth washing liquids.

• It is used as an additive and flavoring agent in animal or poultry feed.

• It is used as a rust remover from the surfaces of various metals like steel, iron, etc.

• It is used in cosmetics as a pH modifier or pH controller.

• It is used in food and beverages to acidify them.

• It is used in compound semiconductor processing.

Phosphoric acid is an IUPAC name for H3PO4. It contains four Oxygen atoms, one Phosphorus atom, and three Hydrogen atoms. It is present in our bones and teeth and acts as a metabolite.

Is H3PO4 an acid or base? Phosphoric acid is a weak oxyacid with three replaceable hydrogen atoms. Its pKa value is 2.14. It donates its acidic hydrogen in an aqueous solution to form its conjugate base, H2PO4-.

Is H3PO4 a strong or weak acid? It follows three sequential deprotonation steps to release all three acidic hydrogens but even after dissociation, split ions reform with each other and make Phosphoric acid again.

Hence, it remains un-dissociated in an aqueous solution and is considered a weak acid.

Thanks for reading it. Please share it with your friends in your school.